CARS.COM — When Warner Bros. released “The Lego Movie” three years ago this week — to an opening weekend gross of $69 million on its way to nearly $258 million in the U.S. alone — it really connected with audiences. The standout appearance by the Will Arnett-voiced Lego Batman just begged for its own film, which it now has in “The Lego Batman Movie,” opening in theaters nationwide Feb. 10. Accompanying the release is the Lego Batmobile, swooping into the 2017 Chicago Auto Show this week to save the day from a largely low-key exhibition in terms of new-model debuts.

The full-scale, Chevrolet-co-branded model of Lego Batman’s ride, referred to in the film as “The Speedwagon,” first showed up in Detroit for the 2017 North American International Auto Show. The debut was followed by an appearance at the Los Angeles premiere of the movie before making its way to the Windy City — home to Christopher Nolan’s “The Dark Knight” series (the good entries, anyway), as well as much of the action of the new Batfleck-era incarnation of the Caped Crusader universe so far.

According to CAS organizers, the Lego Batmobile is constructed from roughly 350,000 individual Lego bricks, measuring 17 feet in length, more than 9 feet in width and nearly 7 feet in height, and tipping the scales at slightly less than 1,700 pounds. Six Lego Master Builders reportedly worked for more than 1,800 hours to assemble the vehicle, which, like the one shown in last year’s “Batman v Superman: Dawn of Justice,” is sort of an aesthetic marriage of the highly stylized Michael Keaton/Tim Burton Batmobile and the Dark Knight’s highly militarized Tumbler.

The square-tube aluminum frame is said to span 86 square feet and weigh nearly 300 pounds. Despite recent-past versions of the Batmobile sticking to a color palette that more or less comprises black, designers incorporated 17 colors into the Lego version, including yellow, red, gray, white and blue, among others.

The vehicle appears to be modeled after a funny car, with its slender, long-nosed shape, side-mounted triple-exhaust pipes and high-riding demeanor. But instead of the big-in-back, tiny-in-front wheels of a drag racer, the Speedwagon has four massive open wheels said to weigh about 100 pounds each. Other outstanding features include expansive, top-mounted batwing-shaped tailfins; a bat hood ornament and Bowtie-brand logo in front; and in back, a trio of thrusters and a personalized Gotham City Department of Motor Vehicles-issued license plate that reads “BT1Tude.”

Visitors to the show, no doubt, will be tempted to test the structural integrity by unsnapping a brick or two, but they shouldn’t bother. The Lego Batmobile, Chevrolet assured us, has been Kragled together (if you don’t know what that means, you haven’t seen “The Lego Movie”). So instead of defacing private property and being ejected from the show, we were invited to the interactive Lego Batmobile Build Station to construct our own Speedwagon measuring roughly an inch and a half in length and width in seven easy steps.

So, everything is awesome. After all, the full-size model is the Batmobile Chicago Auto Show visitors deserve, but not the one they need right now.

Check out the gallery below. 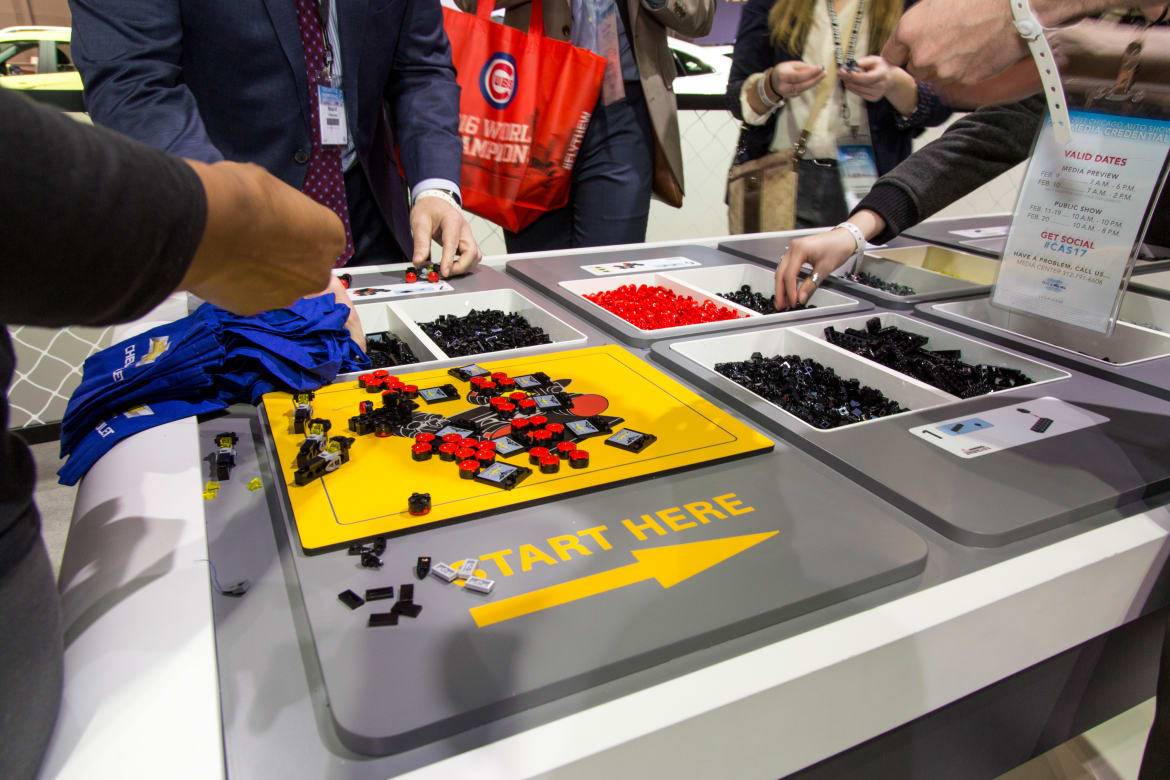 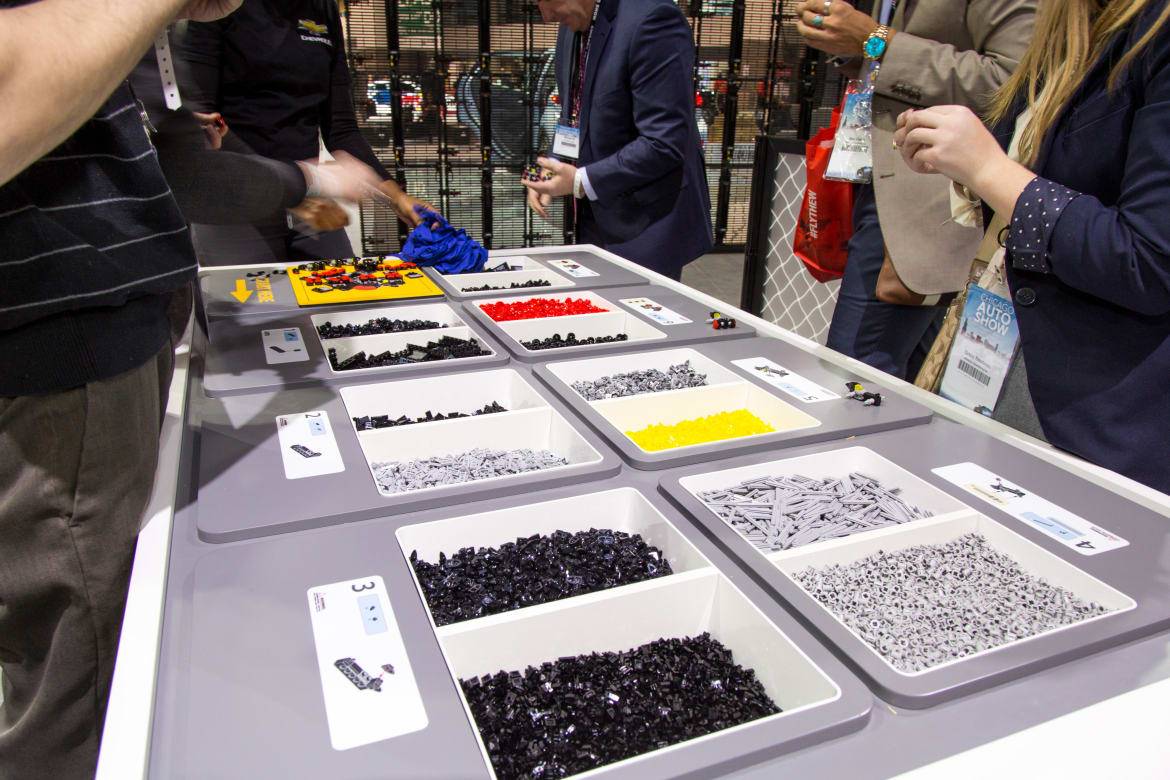 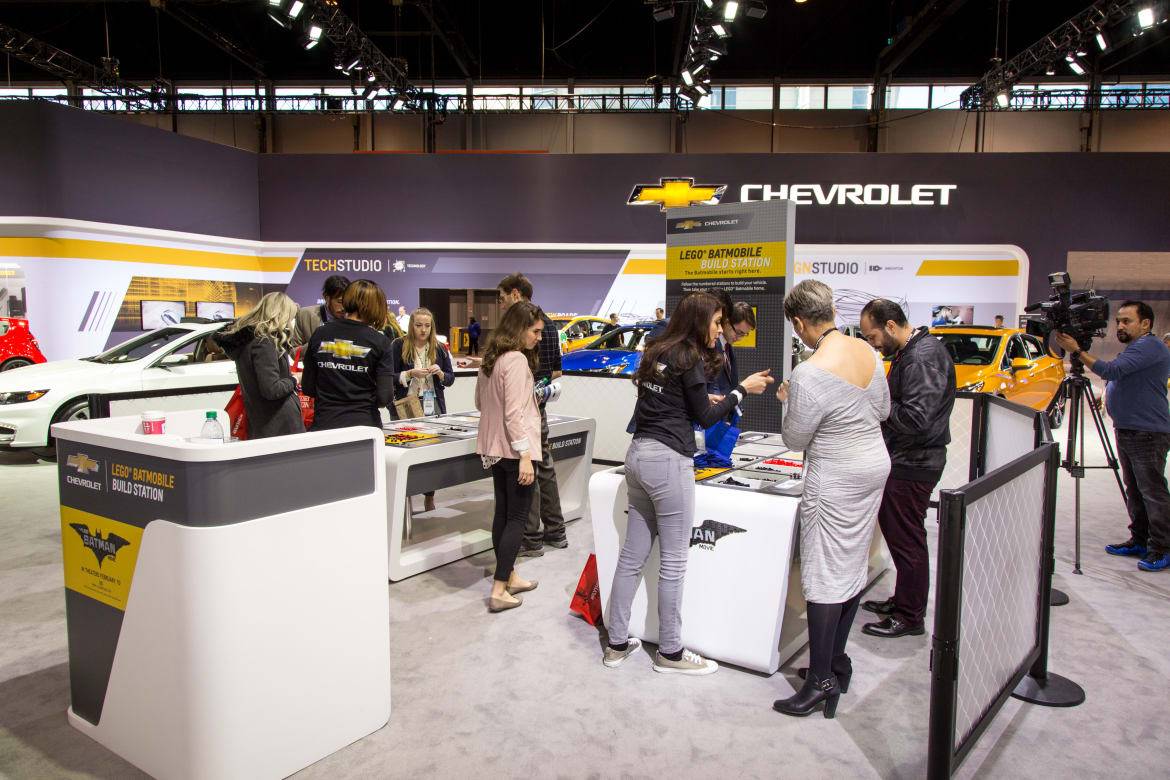 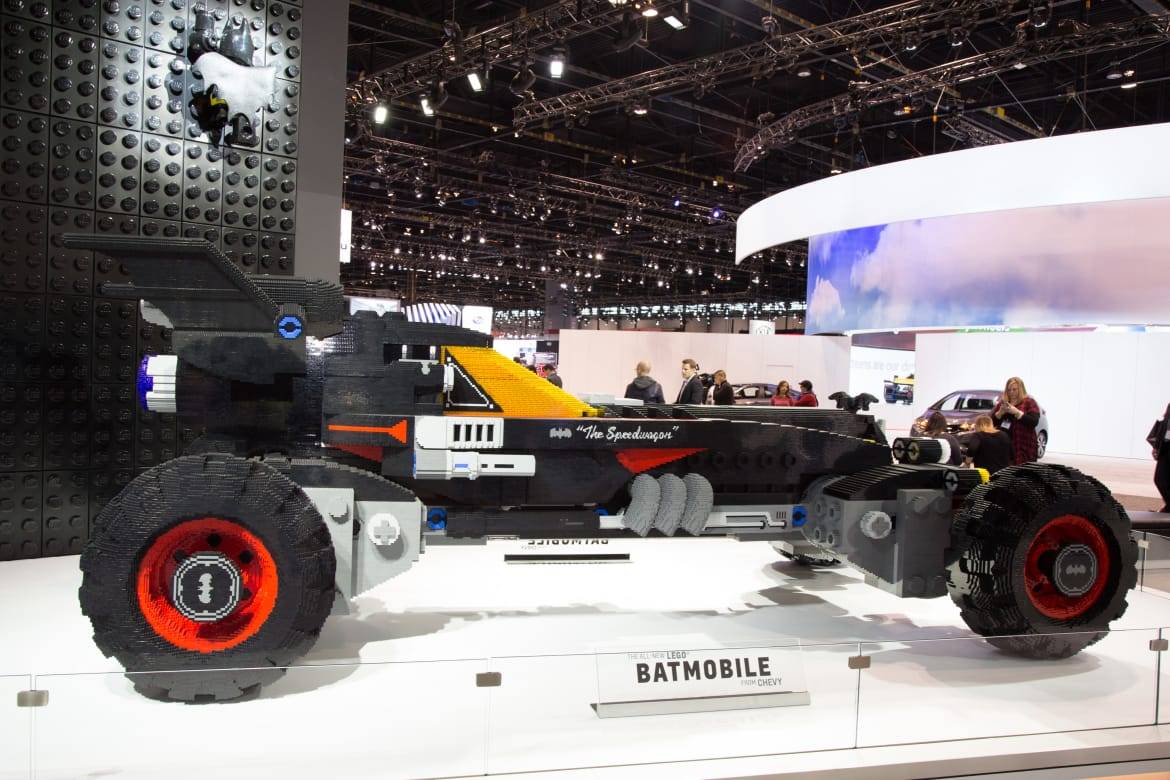 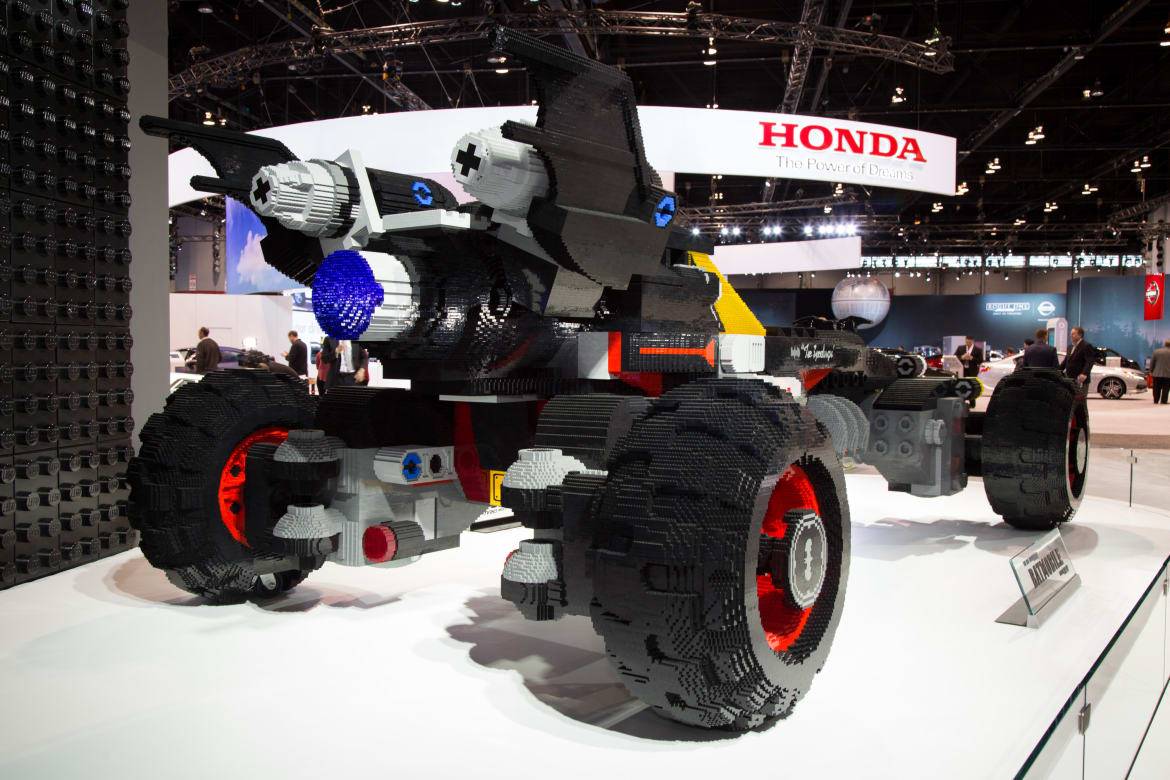 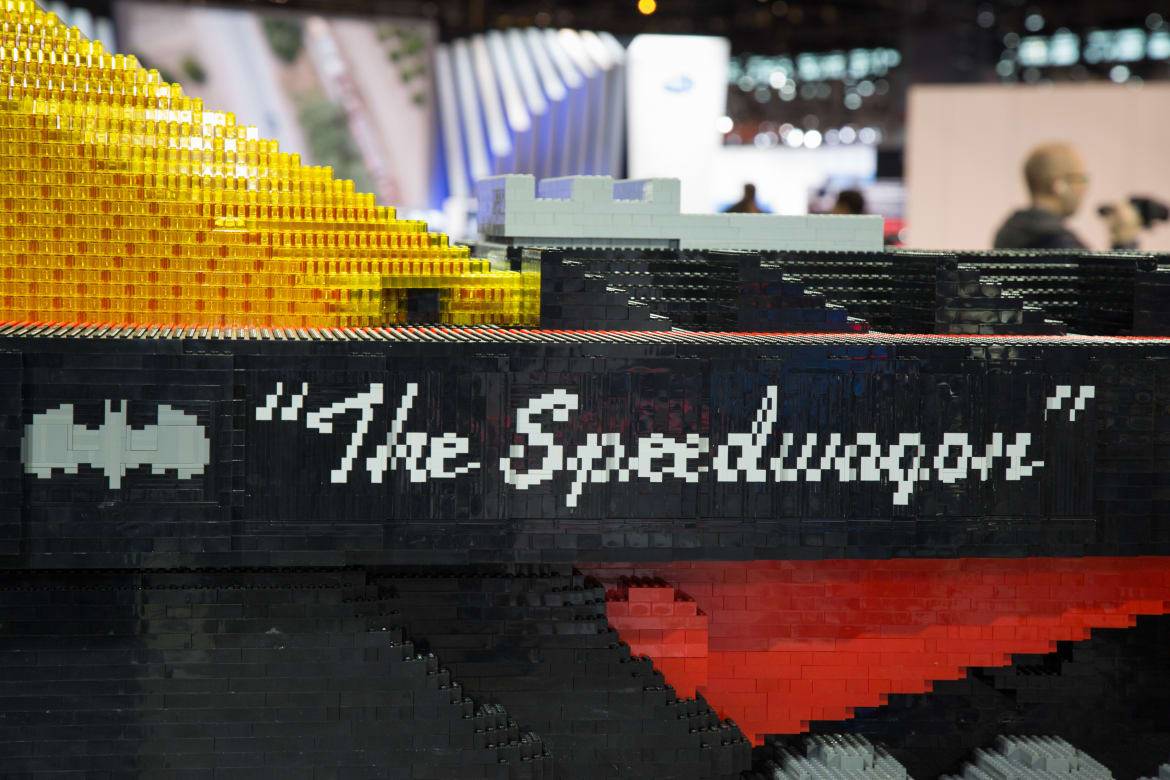 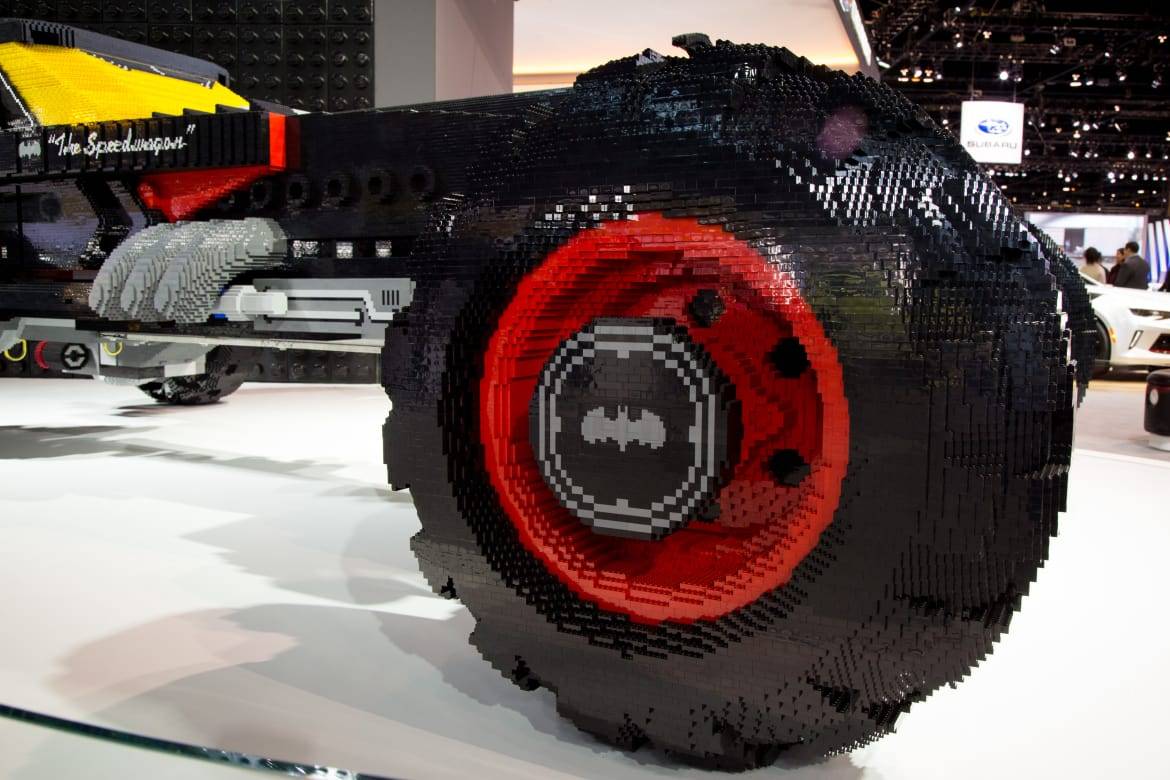 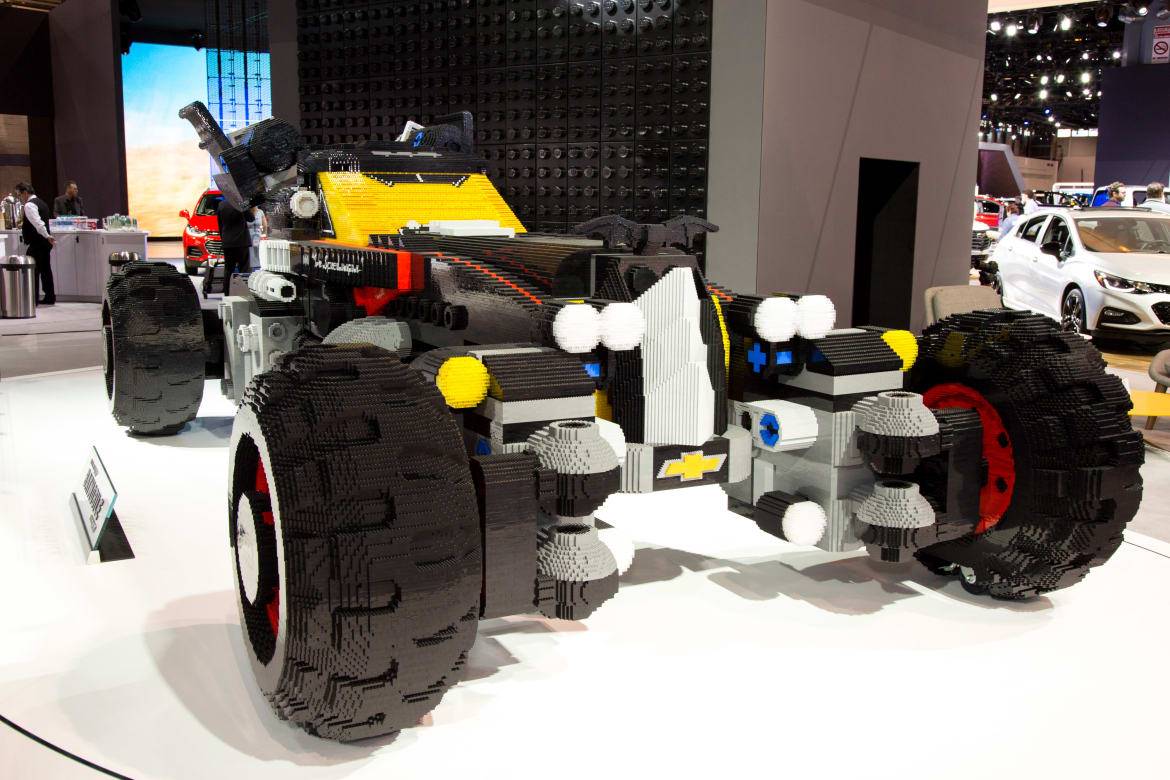 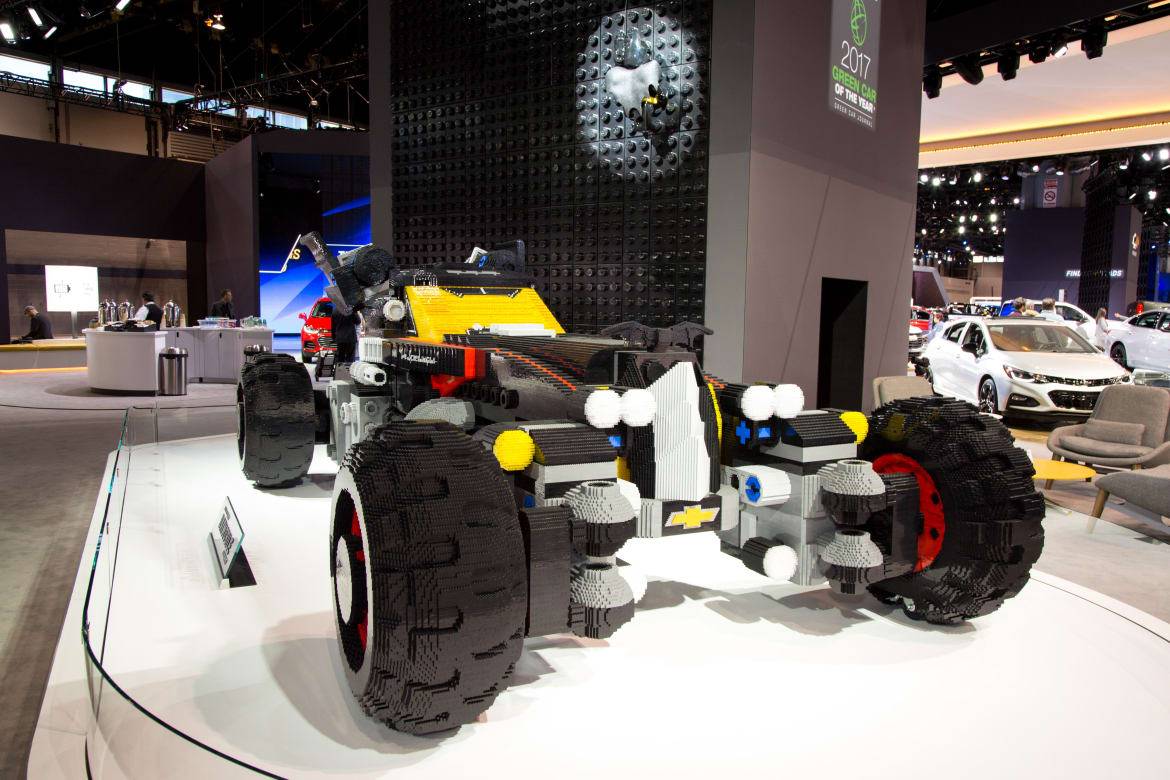 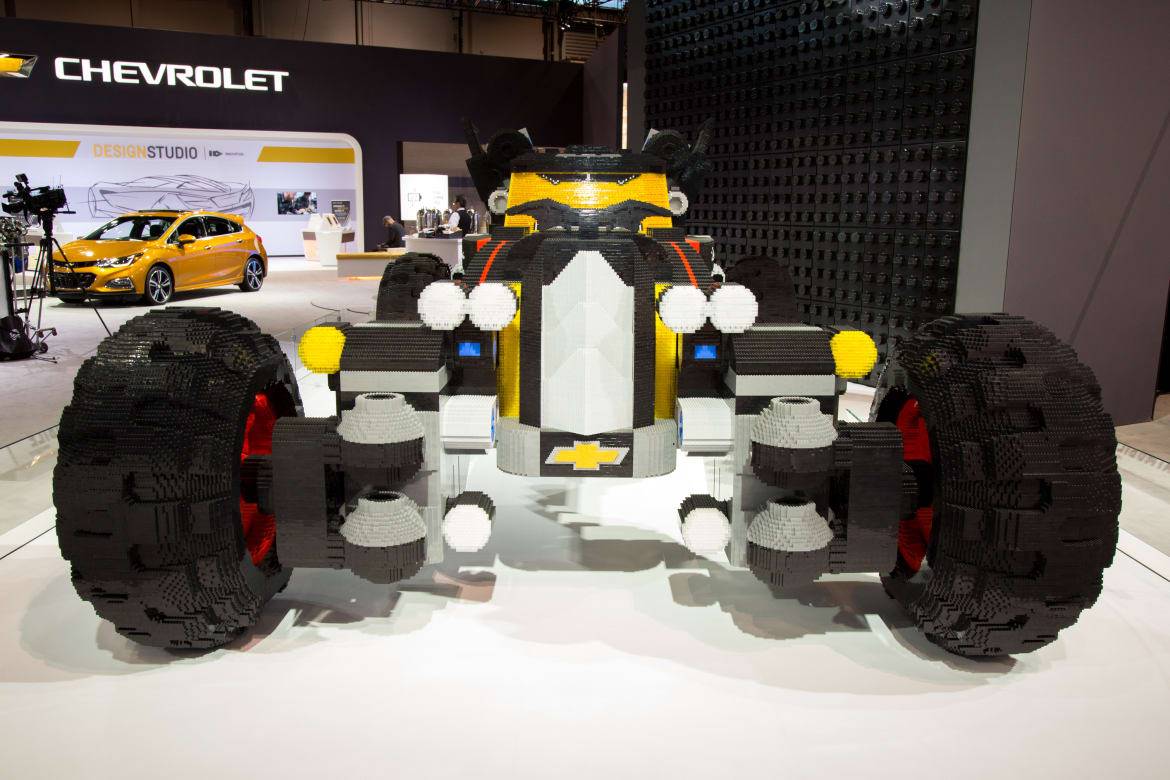 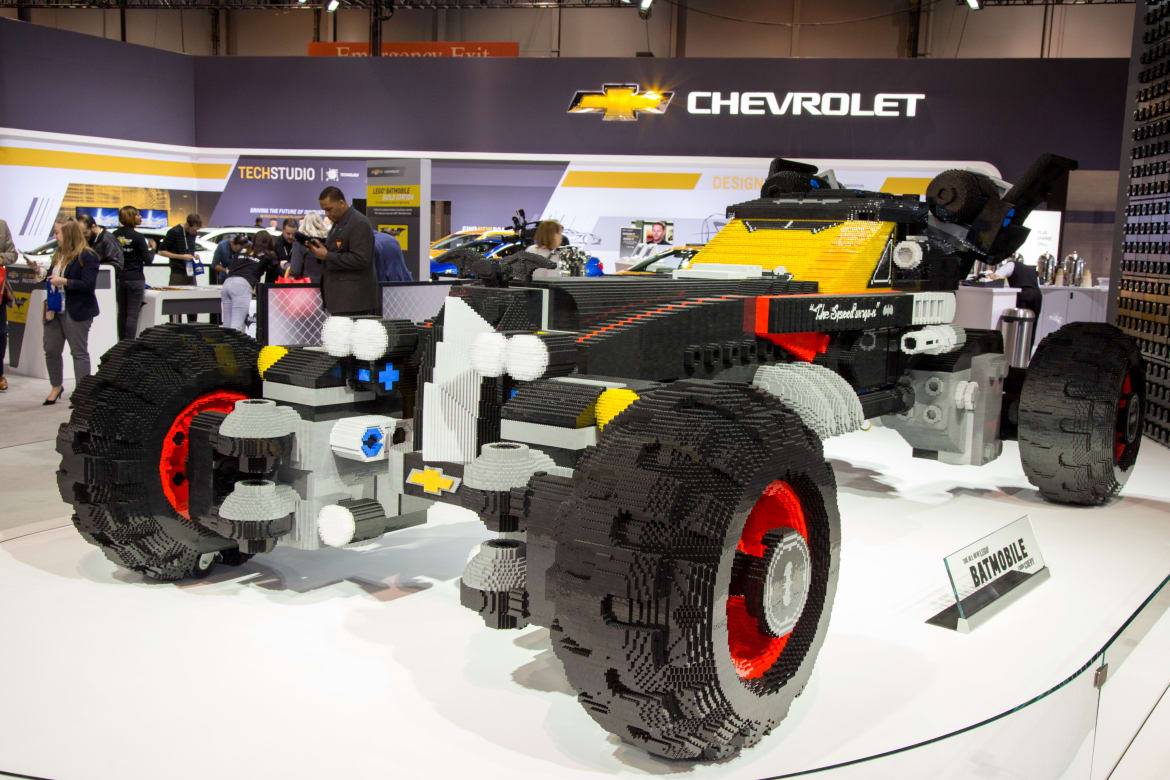 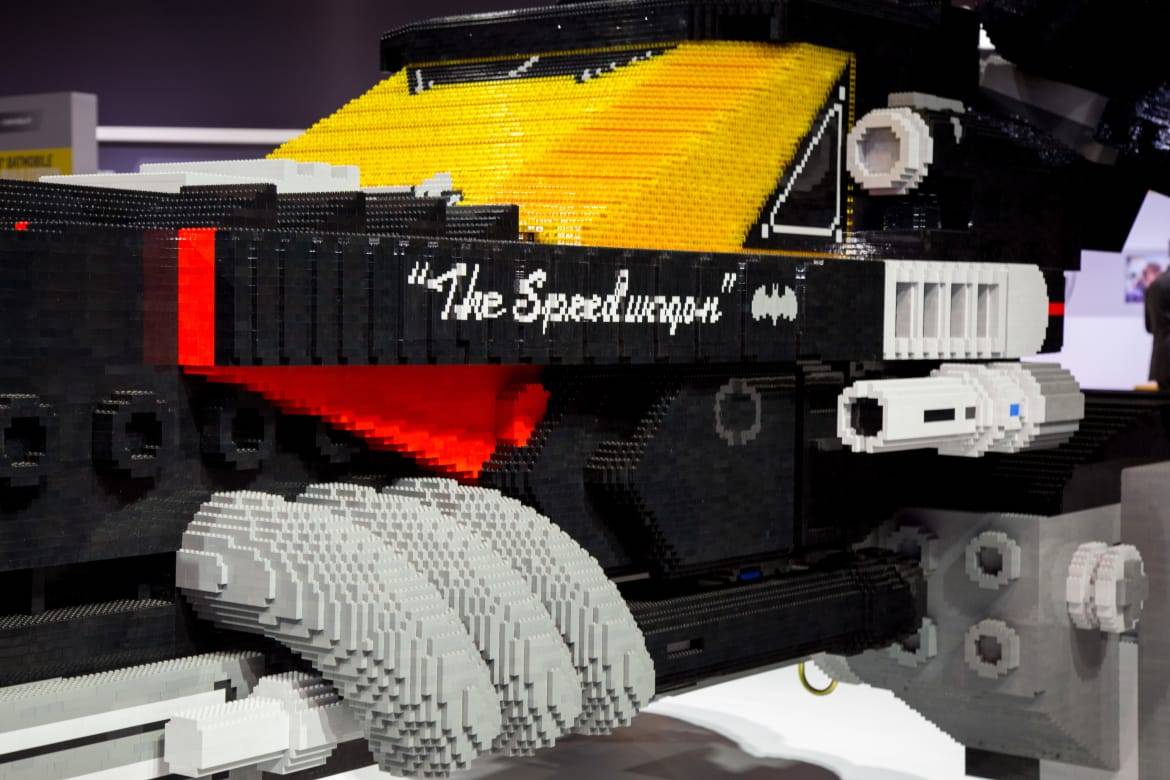 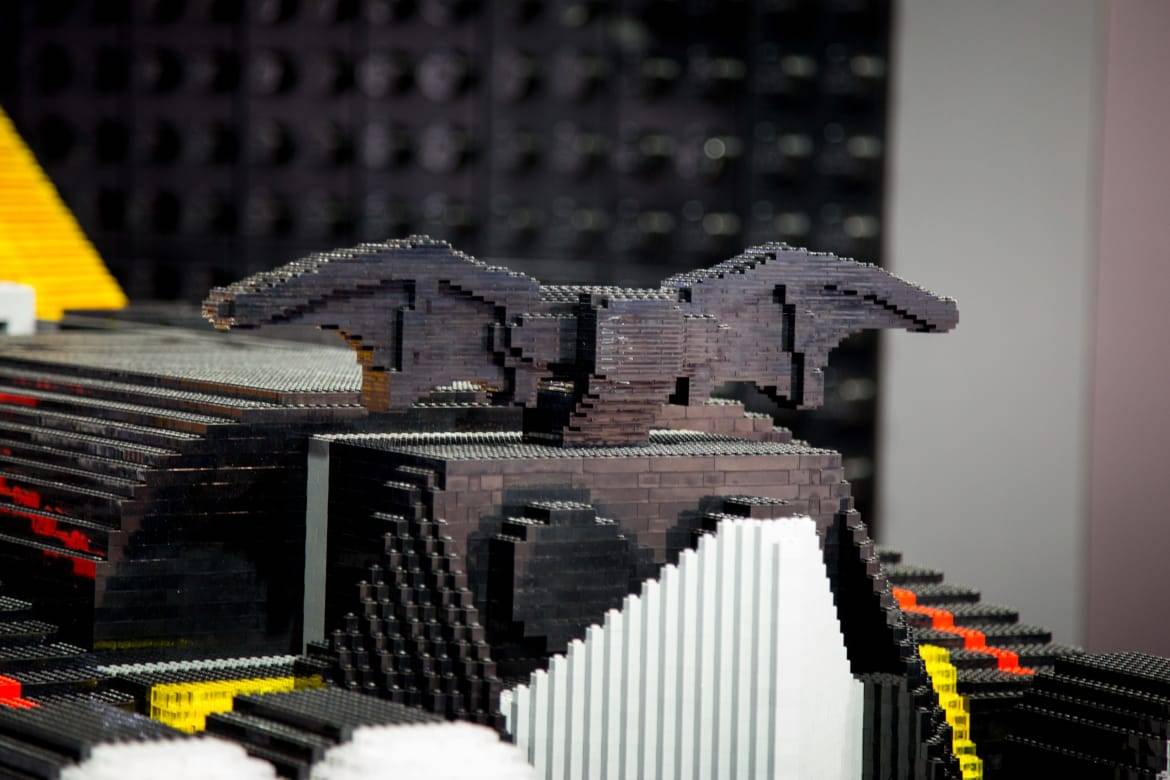