Traveling with kids can be almost as complicated and painful as labor and delivery. One new car seat takes a bit of the sting out of the experience, however. The IMMI Go travel car seat is lighter and more compact than a traditional convertible or forward-facing car seat, making it easier to transport on vacation.

The forward-facing car seat folds into itself and features a built-in carrying case with a handle, so dragging it around an airport is less of a chore. What’s more: It’s designed to fit a variety of heights and weights, and it has easily adjustable straps that are a cinch to use.

The IMMI Go has a five-point harness setup, and it’s designed for children between 31 and 52 inches tall and weighing between 22 and 55 pounds; children must also be at least 2 years old to sit facing forward. The seat is not safe to use outside of those parameters. It also must be in the forward-only position; it can’t be used as a rear-facing car seat, unlike a traditional convertible seat.

Once your child outgrows the need for a five-point harness, the seat can also be used as a backless, belt-positioning booster for kids between 43 and 57 inches tall and weighing between 40 and 100 pounds.
According to the company, it was designed and certified to meet U.S. car seat safety standards.

How Do You Use It?

Last summer, my family and I set off on vacation — a process that involves a lot of stuff, as well as trains, planes and automobiles. My three kids (ages 4, 4 and 8), my husband and I took a city train to the airport, flew to Tennessee and then rented a car for our Smokey Mountains hiking trip.

Normally, my husband and I each strap a car seat to our backs Sherpa-style and slowly trek to the train and through the airport. This time, we swapped one of the convertibles out for the IMMI Go; it immediately lightened the load and was less awkward to carry.

The IMMI Go weighs just 10 pounds, 3 pounds lighter than my usual Evenflo Titan convertible seat. In storage mode, the IMMI Go folds into itself, nestled under a built-in cover. To open it, simply lift the cover snap and pull the head-restraint section up. Initially, it looks like a jumble of material and straps, but don’t be deterred: Once it’s propped up on the seat, it’s easy to install.

First, connect the top tether strap to the car’s top tether anchor. This step is not only essential for forward-facing car seats, but it will also prevent the floppy IMMI Go from folding in on itself while you’re connecting to the lower anchors.

The lower anchor straps connect to the car’s lower anchors like a regular car seat. Also like a regular forward-facing car seat, the harness straps must be at or above shoulder level and the chest clip at armpit level. The shoulder straps and head-restraint height are adjustable via two clips at shoulder level. The lower buckle strap also has three positions; smaller children should use the highest position to keep them snug. Adjusting this section was also easy, and the owner’s manual slides into the back of the seat for quick access. 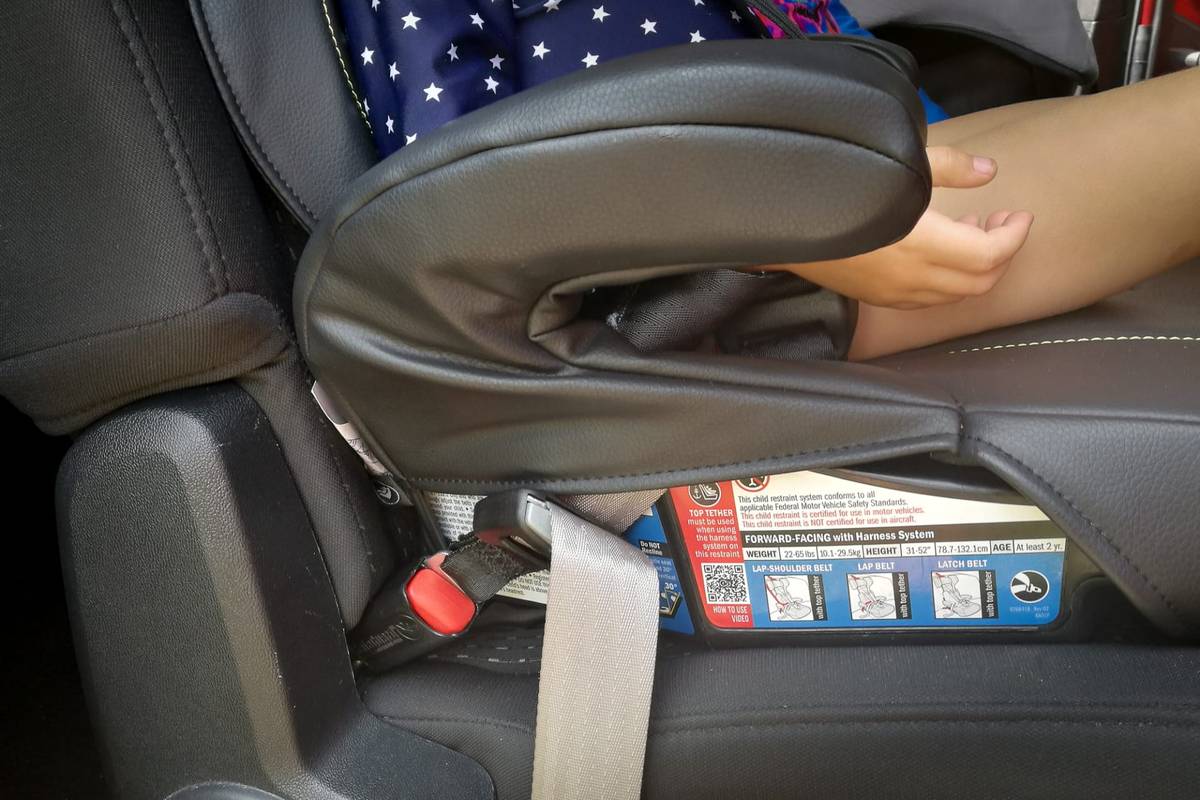 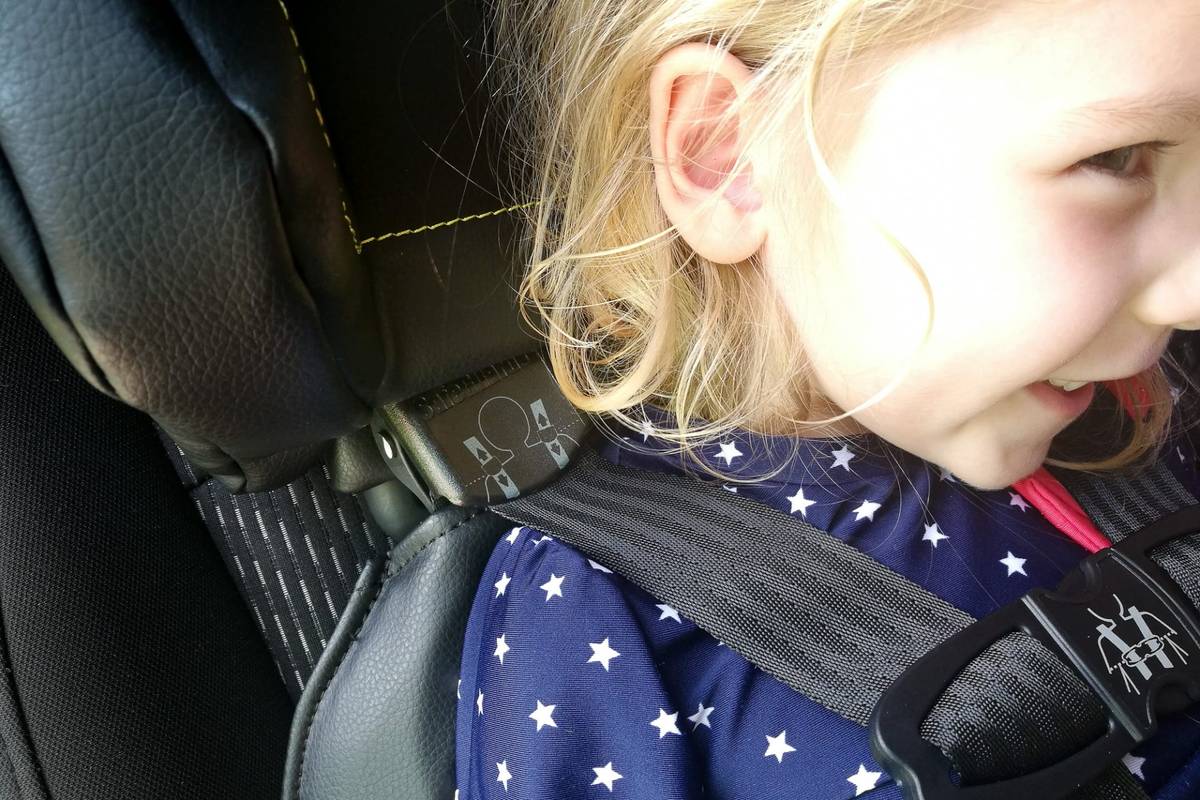 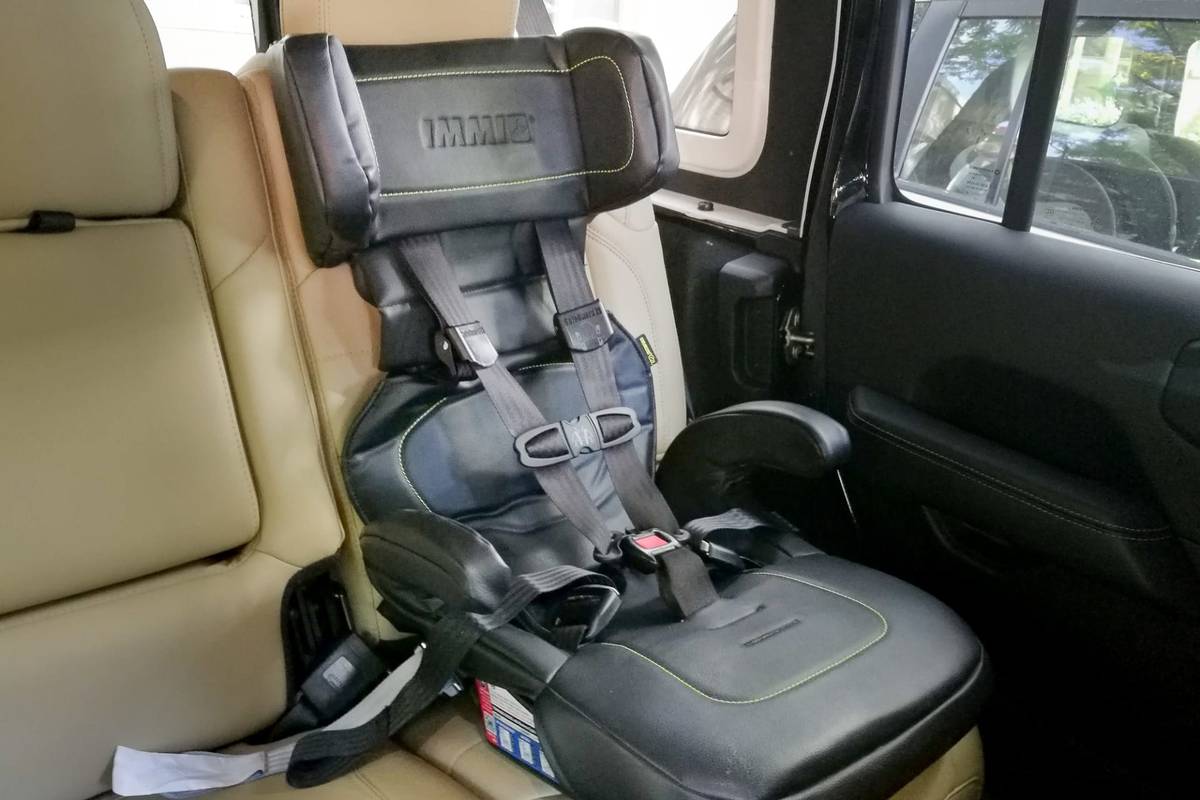 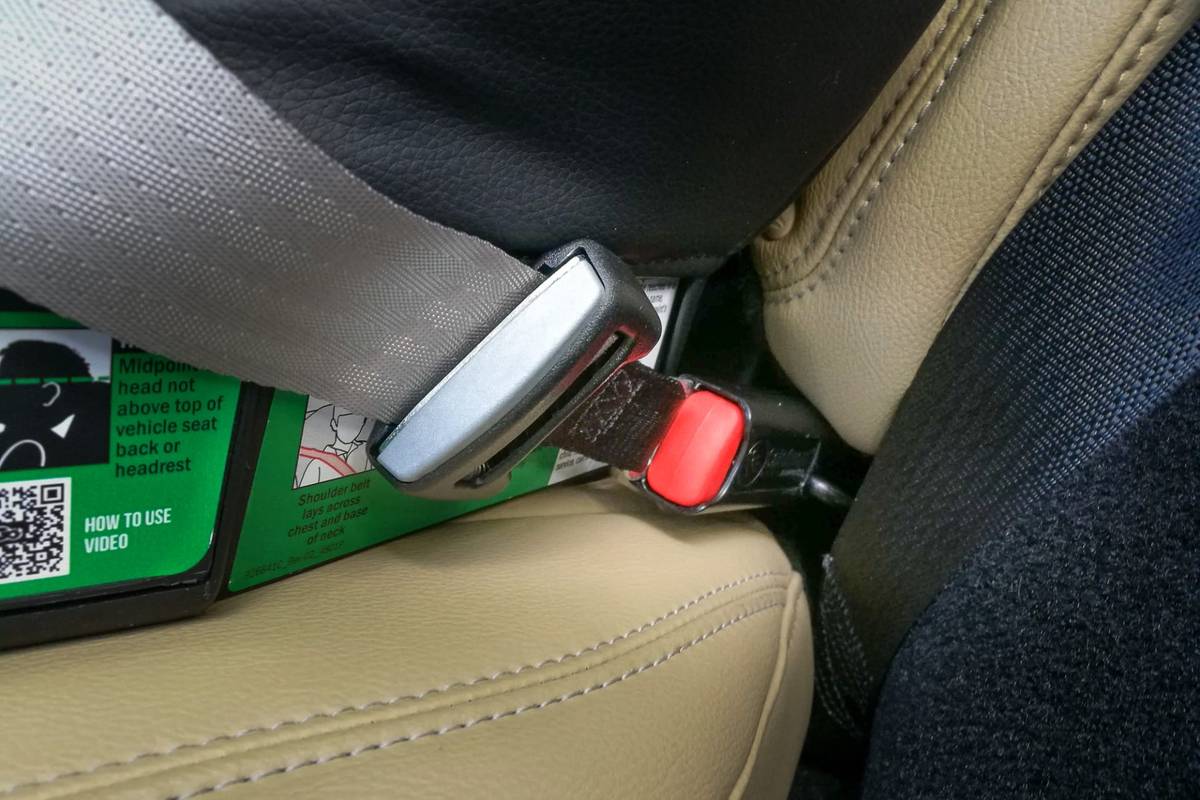 It doesn’t just make plane travel easier; it also works well when you need to take an Uber or cab, or to carpool.

“It is primarily intended for institutional use such as in taxis and ride-shares, but there are many other applications where there is occasional need for a child restraint,” said Charlie Vits, IMMI Go spokesperson.

Aside from its usefulness as a travel booster, it can also be used in vehicles that are typically too small to fit three car seats. It’s much narrower than a traditional car seat: 16.5 inches at its widest spot (across the armrests) and 9.5 inches where it meets the back of the vehicle seat. My Evenflo seat is 19.5 inches wide, and some others are wider.

Lastly — and I found this out the hard way with a car-sick kid — its vinyl-like material is easy to clean. Unlike the cloth cover on my regular car seat (and the rental car’s cloth seats!), the IMMI Go’s fabric doesn’t absorb liquid or odors.

Although I found the seat very handy and easy to use, it’s not without limitations. Cost is a big one; the seat is $209 — around twice the price of my kids’ regular convertible car seat. If you travel a lot, however, it could be well worth the splurge. I found myself wishing for a second one.

While the seat is compact enough to fit in an airplane’s overhead bin (if you decide not to check it), it cannot be used on the airplane. Connecting to a top tether anchor is required, and airplane seats don’t have them.

Installation can be tricky, too. While using the Latch system was easy, installing it with a seat belt is more complicated. Make sure to follow the stickers on the side of the seat and refer to the owner’s manual.

Lastly, comfort could be an issue on long trips since there’s not as much bolstering or padding as in a traditional car seat. One of my twins found it to be uncomfortable and “not cushy enough.” He especially had troubling napping (his favorite automotive pastime). The other twin was perfectly happy in it, even on a long drive.

As a parent, I’m constantly looking for things to make my job easier, and IMMI Go has earned a spot on that list.