Looks like: A shinier Subaru Solterra (a related SUV developed jointly with Toyota) or an edgier Toyota Venza

Global details for Toyota’s bZ4X all-electric SUV are finally available, and the automaker’s first nationally available electric vehicle promises to be an interesting experience, at least in some markets. As these are global details, we can’t yet be certain of what exactly the bZ4X will offer those of us in North America, but the SUV — a joint development with Subaru, similar to what occurred with the Subaru BRZ and Toyota GR86 sports cars — should go on sale globally in the middle of 2022. Stateside availability is in the plan: Just weeks after Toyota unveiled a concept version of the SUV in China last April, the automaker’s U.S. arm said to expect the production model sometime in 2022.

We’ve speculated a bit on what we’d like to see from yet another mass-market EV, and while we don’t have full details yet, it does appear that some of what we’re looking for will be present. At the same time, some of what Toyota will offer in the bZ4X seems, well, futuristic just for the sake of it.

As with many battery-electric vehicles, the bZ4X will come in single- or dual-motor versions, with the dual-motor variant capable of driving all four wheels. The single-motor bZ4X will be front-wheel drive. Both versions will use the same 71.4-kilowatt-hour battery pack, with horsepower ratings varying from roughly 200 (FWD) to 215 (AWD) total hp.

We had hoped that Toyota would prioritize range over performance, and it seems like the bZ4X does that. Toyota estimates total range for both FWD and AWD versions will land around 310 and 285 miles, respectively. But those numbers don’t employ U.S. EPA testing cycles. Stay tuned for the bZ4X’s EPA-rated range closer to when it goes on sale.

Toyota says the FWD version will go from 0-62 mph in 8.4 seconds, dropping to 7.7 seconds with AWD. Charging estimates aren’t fully available, but Toyota says the bZ4X can reach an 80% charge in 30 minutes using DC fast charging. Maximum charging power is 6.6 kilowatts with AC power and 150 kW with DC. 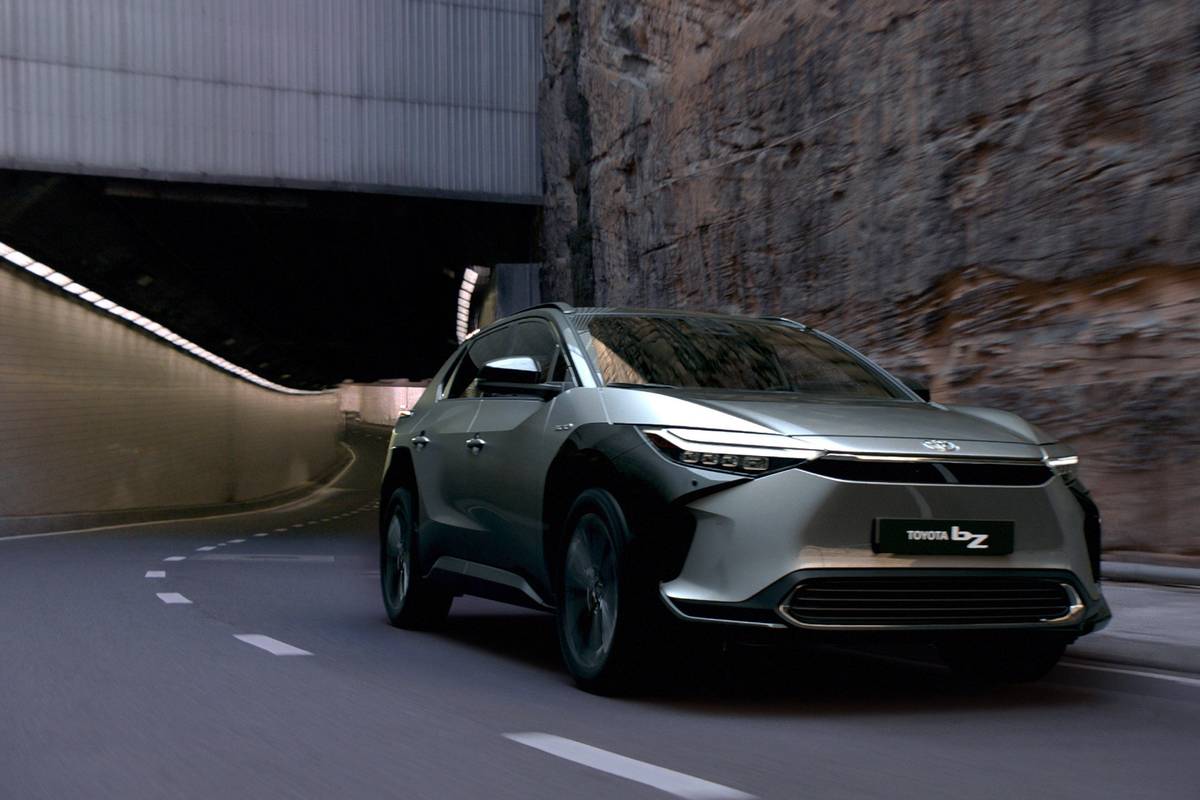 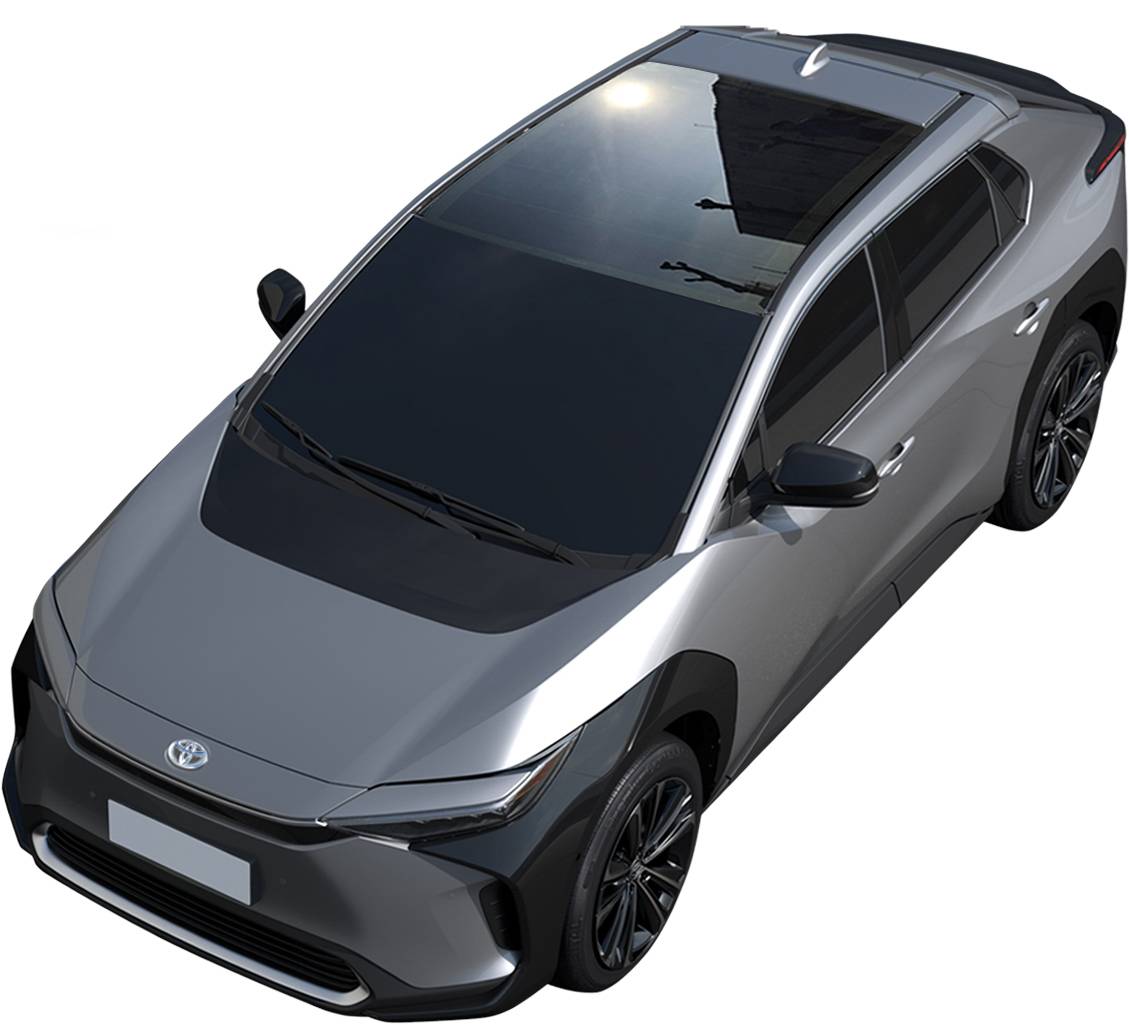 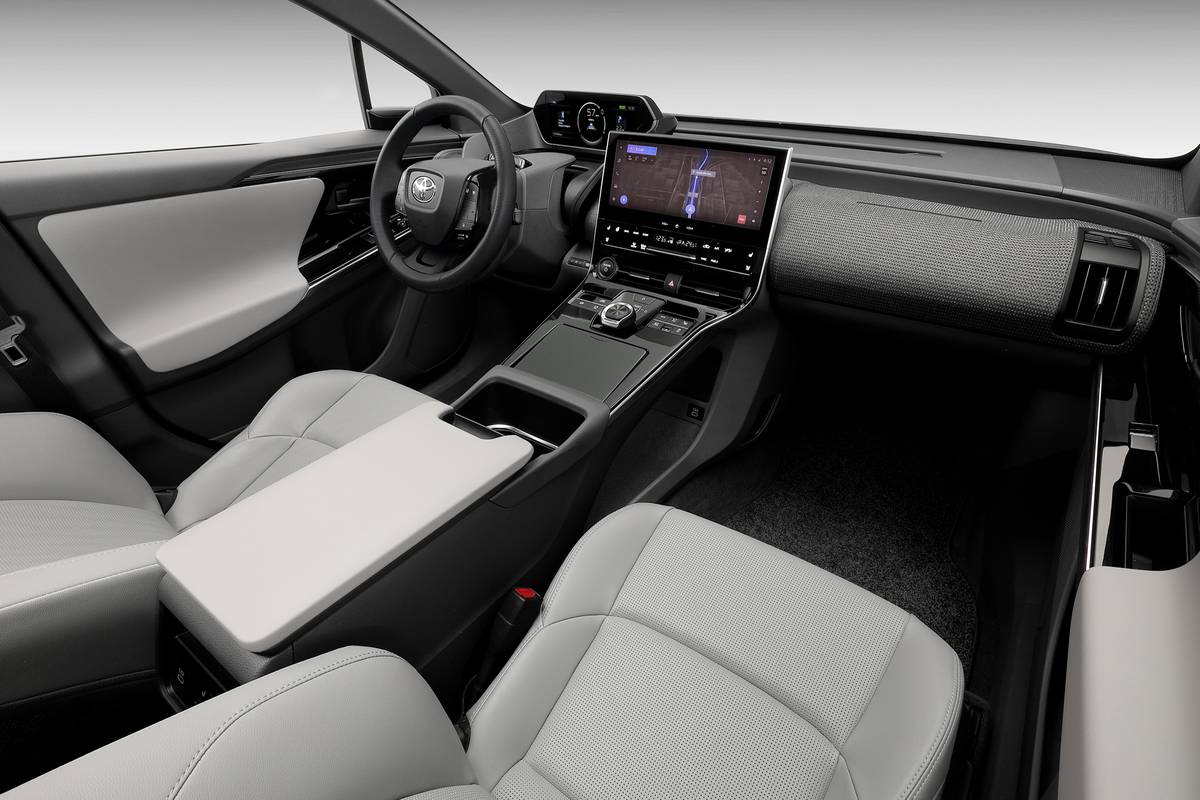 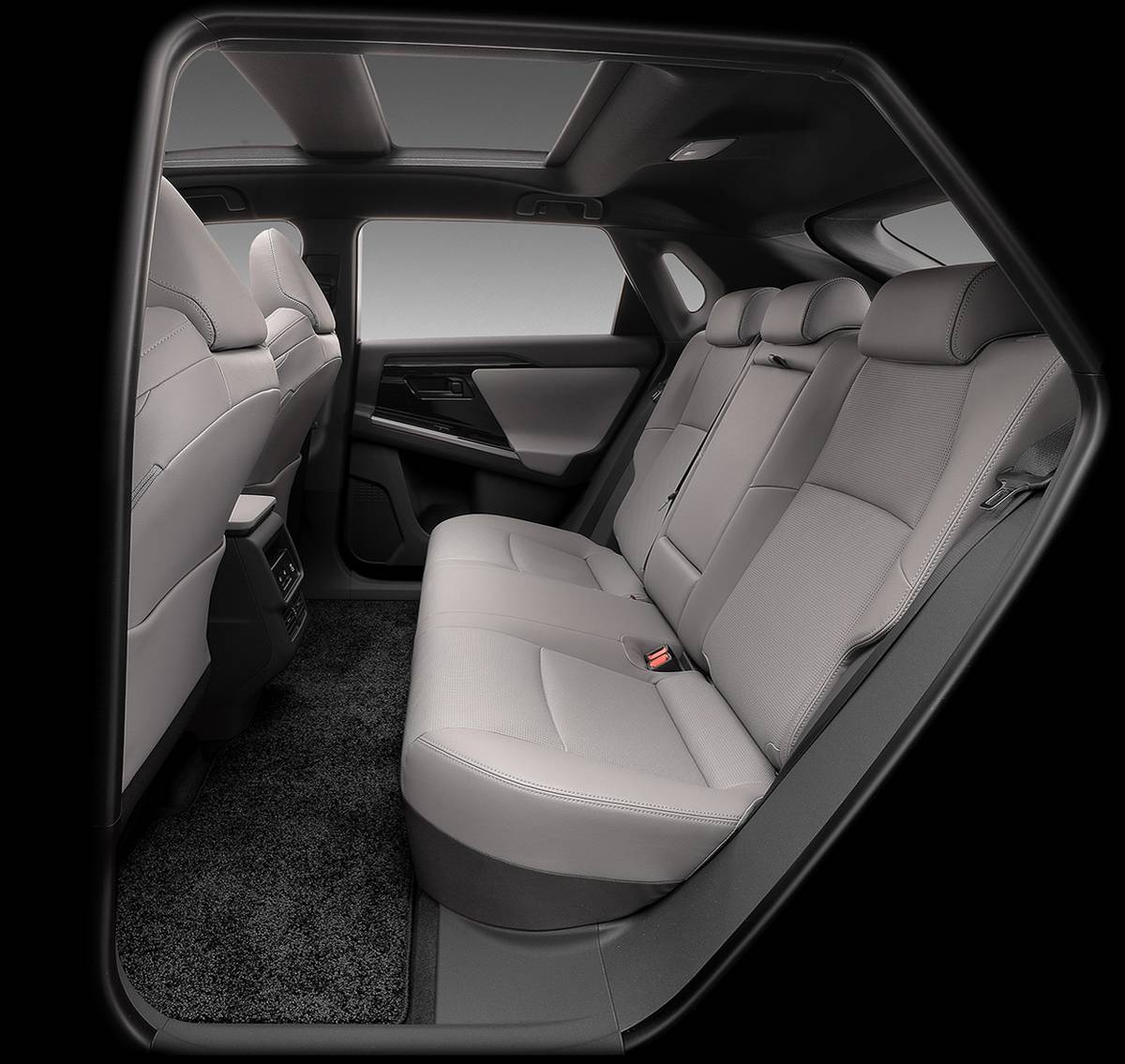 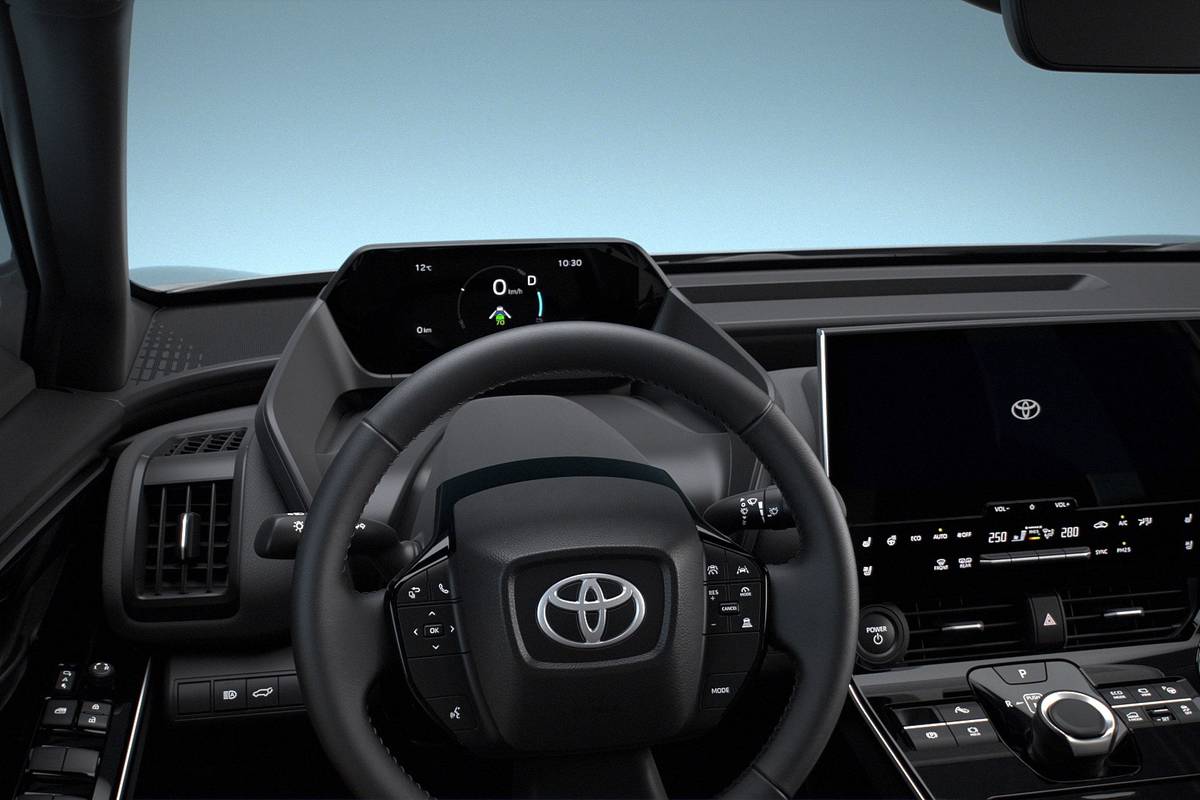 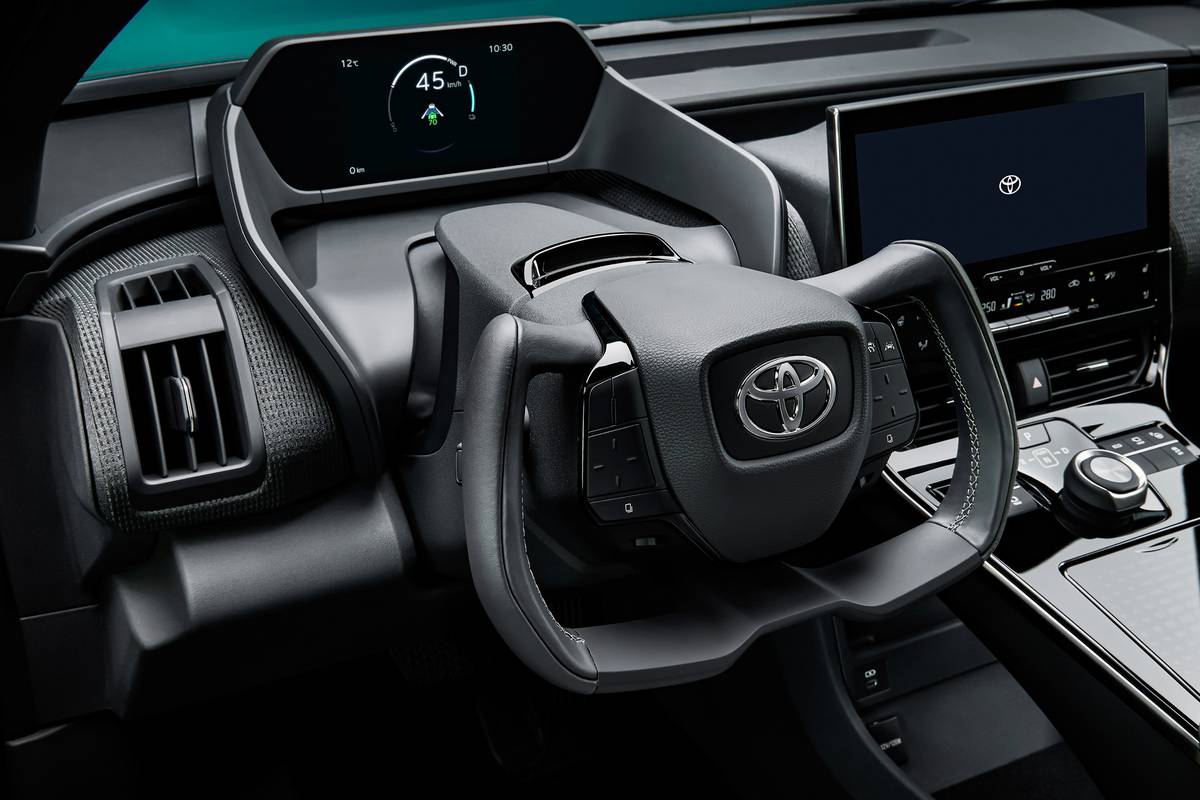 The bZ4X doesn’t look much different compared to the concept version revealed earlier this year, which is to say it doesn’t look especially unusual. The two-row SUV is somewhere between the RAV4 and Venza in size, with sharp angles and more Venza-like rear styling. A solar roof panel will be available in at least some markets and can help recharge the bZ4X however slightly.

Inside is where the fun really begins — at least, if you’re buying the bZ4X in China, where an available yoke-style steering wheel looks similar to what’s found in the refreshed Tesla Model S. Unlike the Tesla, Toyota’s yoke uses steer-by-wire technology instead of traditional mechanical steering, preventing drivers from needing to do hand-over-hand motions for certain maneuvers without a full wheel. Toyota says the system will go from lock-to-lock in approximately 150 degrees of movement — hopefully a ratio that varies with vehicle speed, maximizing maneuverability at lower speeds without the risk of unintentional overcorrecting at higher ones.

The rest of the bZ4X’s interior looks fairly conventional, with a large upright multimedia display and fully digital instrument panel. Images of the interior had us fearing the bZ4X’s arm-level controller might operate the display, but it actually appears to be a rotary gear selector that’s flanked by physical buttons. For added comfort, the bZ4X will have another Toyota-first feature: radiant foot-level heating for front occupants. An available panoramic roof should increase the interior’s feeling of spaciousness, too.

As a joint development with Subaru, the bZ4X has access to both Toyota and Subaru technologies. As such, the bZ4X’s will use Subaru’s X-Mode all-wheel drive system instead of a Toyota setup. Interestingly, the bZ4X’s suite of advanced driver-assistance systems will be Toyota’s Safety Sense (the new 2022 Toyota GR86 sports car, another vehicle Toyota jointly developed with Subaru, uses Subaru’s EyeSight system). According to Toyota, Safety Sense will be capable of adding or updating its features via over-the-air updates.

Expect full details, including pricing and North American specifications, closer to the bZ4X’s mid-2022 release date in all of Toyota’s planned global regions.