In equipping nearly all models and trim levels with the Toyota Safety Sense and Lexus Safety System Plus packages, the automaker will beat the clock by about four years. The National Highway Traffic Safety Administration and Insurance Institute for Highway Safety last week announced that they struck an agreement with a large coalition of automakers to make crash avoidance systems, including automatic emergency braking, standard on nearly every new car by September 2022 and on all heavy-duty trucks by three years later.

“Already available as a low-cost option on a broad range of Lexus and Toyota vehicles, Lexus Safety System Plus and Toyota Safety Sense are designed to help address three key areas of driver assistance: preventing or mitigating frontal collisions – including pedestrians; helping keep drivers within their lane; and enhancing road safety during nighttime driving,” Toyota said in a statement.

All but five of 30 Toyota and Lexus vehicles will come standard with the advanced safety packages, which in addition to automatic emergency braking include lane departure warning and adaptive high beams. The Lexus GX 460 SUV, and the Toyota Mirai hydrogen fuel-cell electric vehicle, 4Runner SUV and 86 coupe, as well as the Scion iA, will not be covered. Model-specific dates for the safety packages will be announced later. 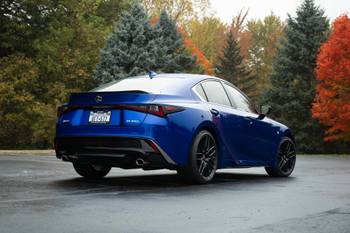