The Ford Maverick hybrid compact pickup truck offers impressive capability for its size; our long-term 2022 Lariat trim level actually has a higher payload capacity, 1,428 pounds, than our long-term 2021 Ford F-150 Limited hybrid, which is rated 1,362 pounds. We’ve tested the Maverick hybrid with its cargo box loaded with payload, but we were also curious to see how it’d perform with a trailer in tow — and how much it would lower the truck’s impressive fuel economy.

The Maverick hybrid’s maximum towing capacity is 2,000 pounds, the same as the base towing capacity in Mavericks with the available turbocharged 2.0-liter four-cylinder engine. However, choosing the optional Tow Package that’s available with the turbo four-cylinder increases maximum towing capacity to 4,000 pounds. The Tow Package requires all-wheel drive, and it includes a transmission oil cooler, higher capacity radiator and upgraded fan, a seven-pin trailer wiring connector and an integrated trailer-brake controller.

The Tow Package’s higher capacity isn’t available for the front-wheel-drive Maverick hybrid, however. That left us with 2,000 pounds of towing capacity, which we wanted to get close to — but not go over — for this test. To do that, we rented a small U-Haul single-axle enclosed trailer. Despite being a relatively small trailer, its 900-pound curb weight meant that we had used nearly half of the Maverick hybrid’s towing capacity just by hitching it to the truck.

The plan was to load the trailer with tools, parts and supplies that might be needed during a 24 Hours of Lemons race weekend, but it was clear we were going to need to be selective when packing so as not to overload the truck. This meant leaving things behind, like our engine hoist (that we thankfully didn’t need) and also our hydraulic shop press (which would have been nice to have, but that’s another story).

Despite packing relatively light, the trailer and its cargo came in at around 1,800 pounds when I stopped to weigh it during our trip. With some additional tools and supplies in the Maverick’s cab and cargo box, the gross combined weight for the truck and loaded trailer totaled 5,980 pounds. 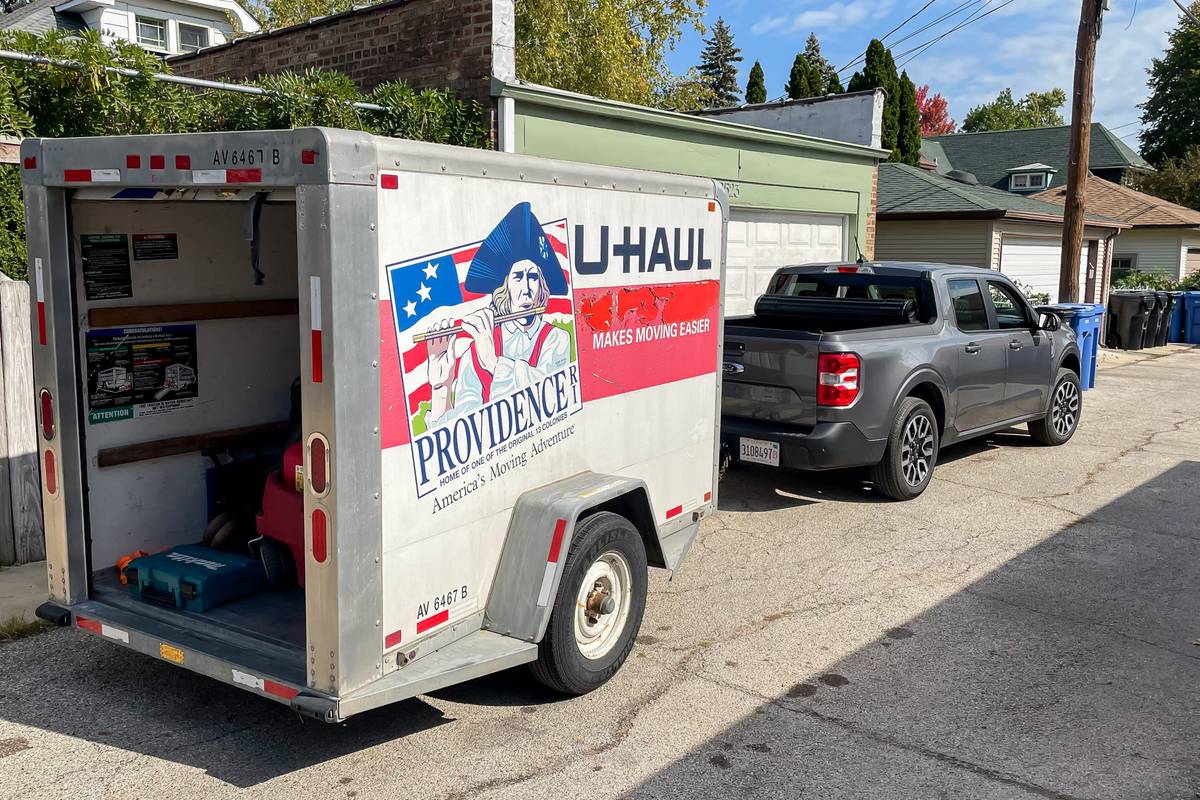 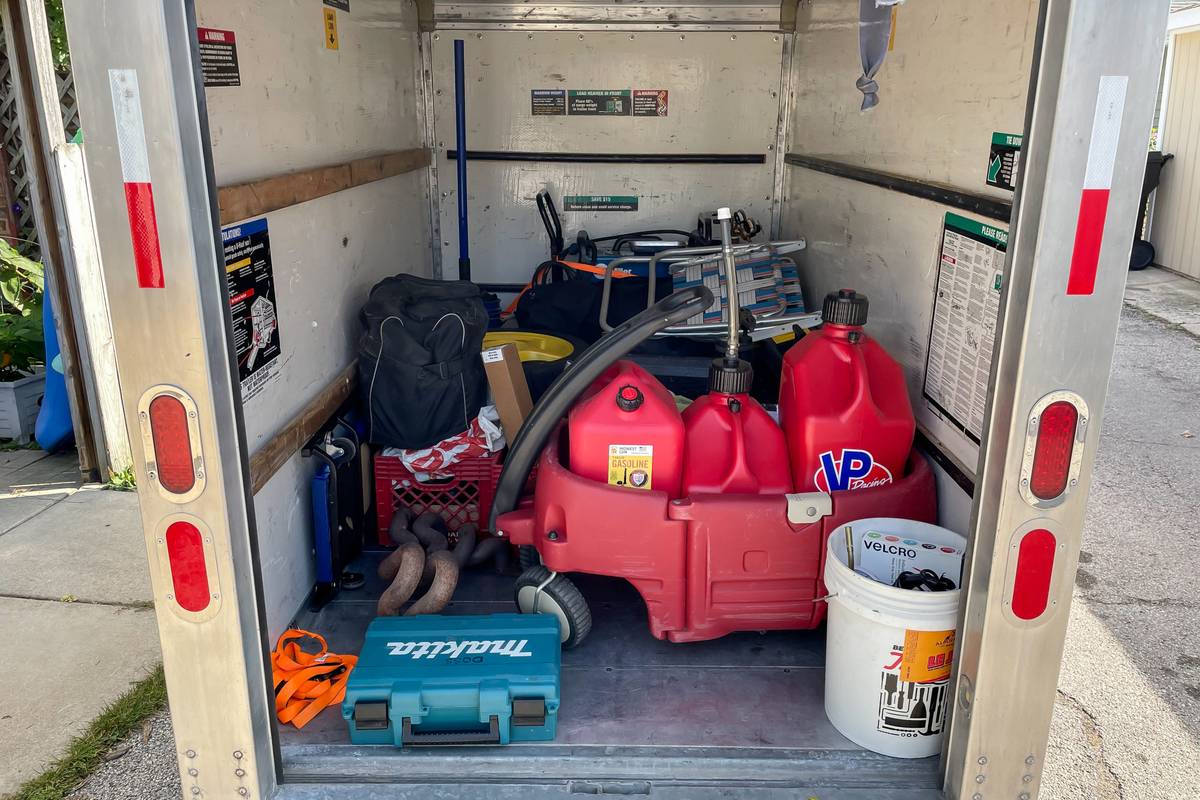 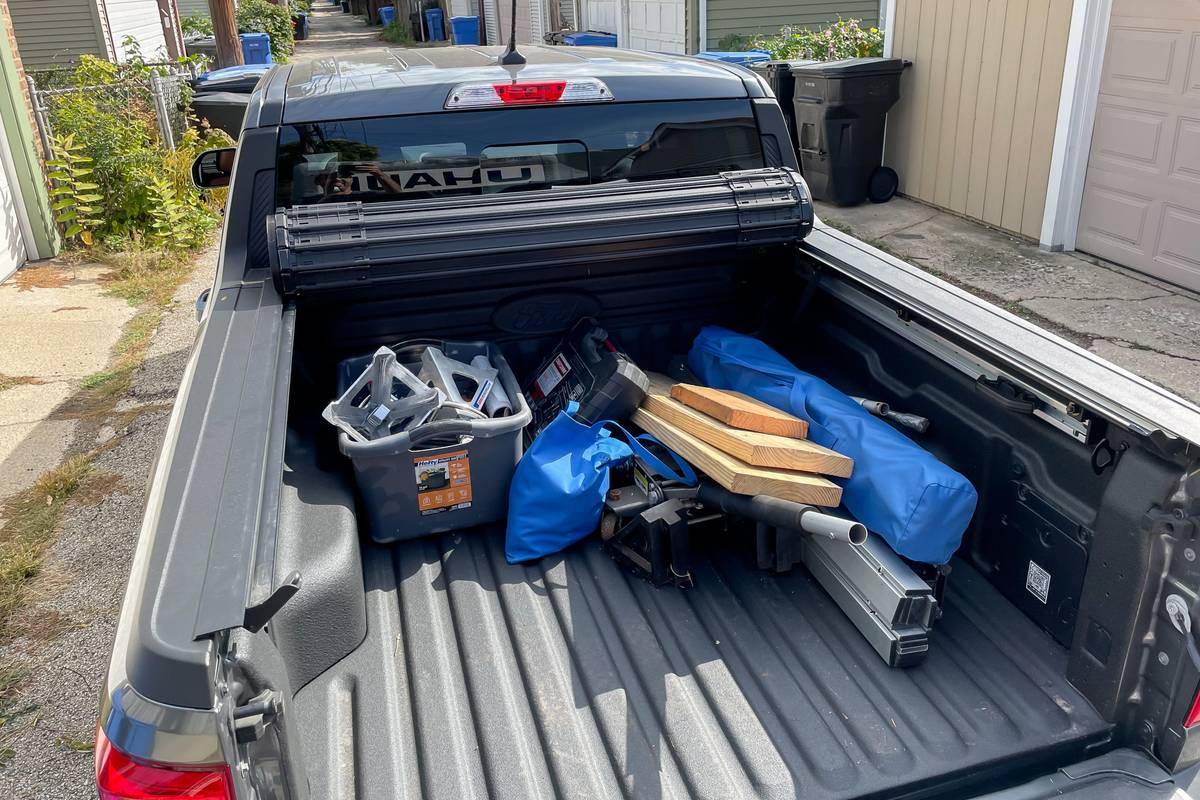 1/3
2022 Ford Maverick | Cars.com photo by Mike Hanley
Don’t miss out on the latest news, reviews and videos from our in-house experts. Get updates in your inbox.

The towing trip consisted of two legs, each around 145 miles. The majority of the route was interstates, with speeds ranging from 55 mph to 65 mph, and we were towing in the relatively flat Midwest rather than the mountainous terrain found in some parts of the country.

Even though there were no hills to ascend, the Maverick hybrid’s acceleration when towing is modest, though it was able to get up to cruising speeds without drama. While relying on the Maverick’s braking system to bring the truck and trailer to a stop wasn’t a problem since our drive covered mostly level terrain, I’m not sure I’d be as comfortable towing this trailer on steep descents; it felt like the truck’s brakes were working hard enough as it was. The Maverick hybrid has unladen ride quality that’s a bit bumpy, but putting some additional weight over the rear wheels with the attached trailer — along with some supplies in the cargo box — helped make for a smoother, more comfortable ride.

Our towing fuel economy as reported by the Maverick’s trip computer was very similar for each leg of the trip: 27.5 mpg on the outbound trip and 28.4 mpg on the return a few days later. Shortly after the towing trip, I took the Maverick hybrid on a drive from Chicago to Detroit that covered some of the same roads. On this trip, the truck’s non-towing fuel economy was 38.7 mpg, according to the trip computer. (The 2022 Maverick hybrid is EPA-rated at 42/33/37 mpg city/highway/combined.)

Towing with the Maverick hybrid near its maximum trailering capacity was a drama-free experience overall, and even though the truck’s fuel economy took a significant hit when towing, our observed efficiency of around 28 mpg is still very respectable by towing standards.

Even so, our scenario shows just how easy it is to approach the Maverick hybrid’s 2,000-pound towing capacity. We made it work, but it’s the kind of situation — barely having enough truck for the task at hand — that many truck buyers are loath to find themselves in. Choosing the EcoBoost-powered Maverick to get the optional Tow Package and its 4,000 pounds of trailering capacity means forgoing the Maverick hybrid’s generally impressive gas mileage, but the extra towing capability would have been nice to have for this test.