See all 169 vehicles from this dealership.

This seller has been on Cars.com since July 2017.
For years we have been striving to give our customers the best quality service possible. Customer satisfaction is our number one priority and we want our Buffalo and Rochester area customers to know that we are here to help. The Upstate Automotive Group is one of the leading Toyota Chevrolet Dodge Chrysler and Jeep dealerships in the Erie County Wyoming County Genesee County Livingston County Niagara County Monroe County and Cattaraugus County area offering excellent customer service a friendly environment attractive financing options and great cars!
Your WNY Chevy Dealer!!!!!! 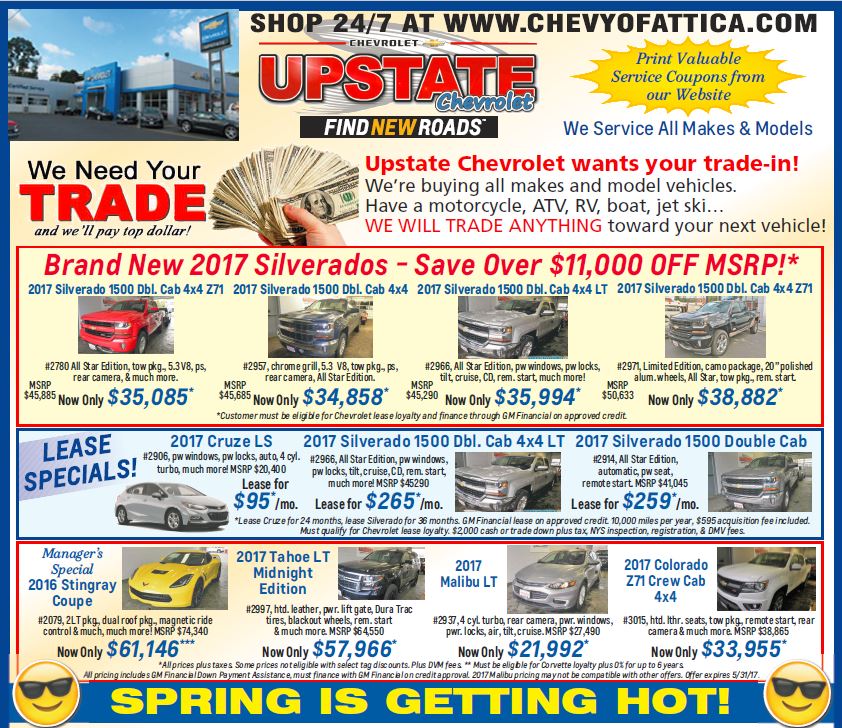 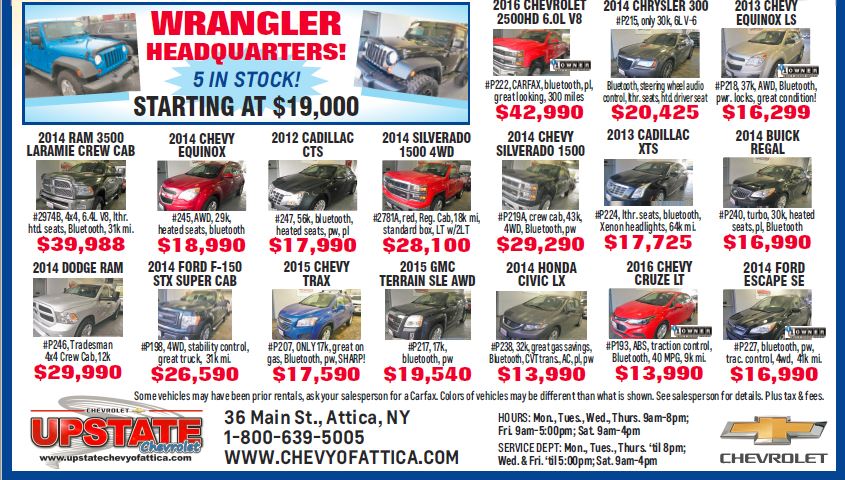 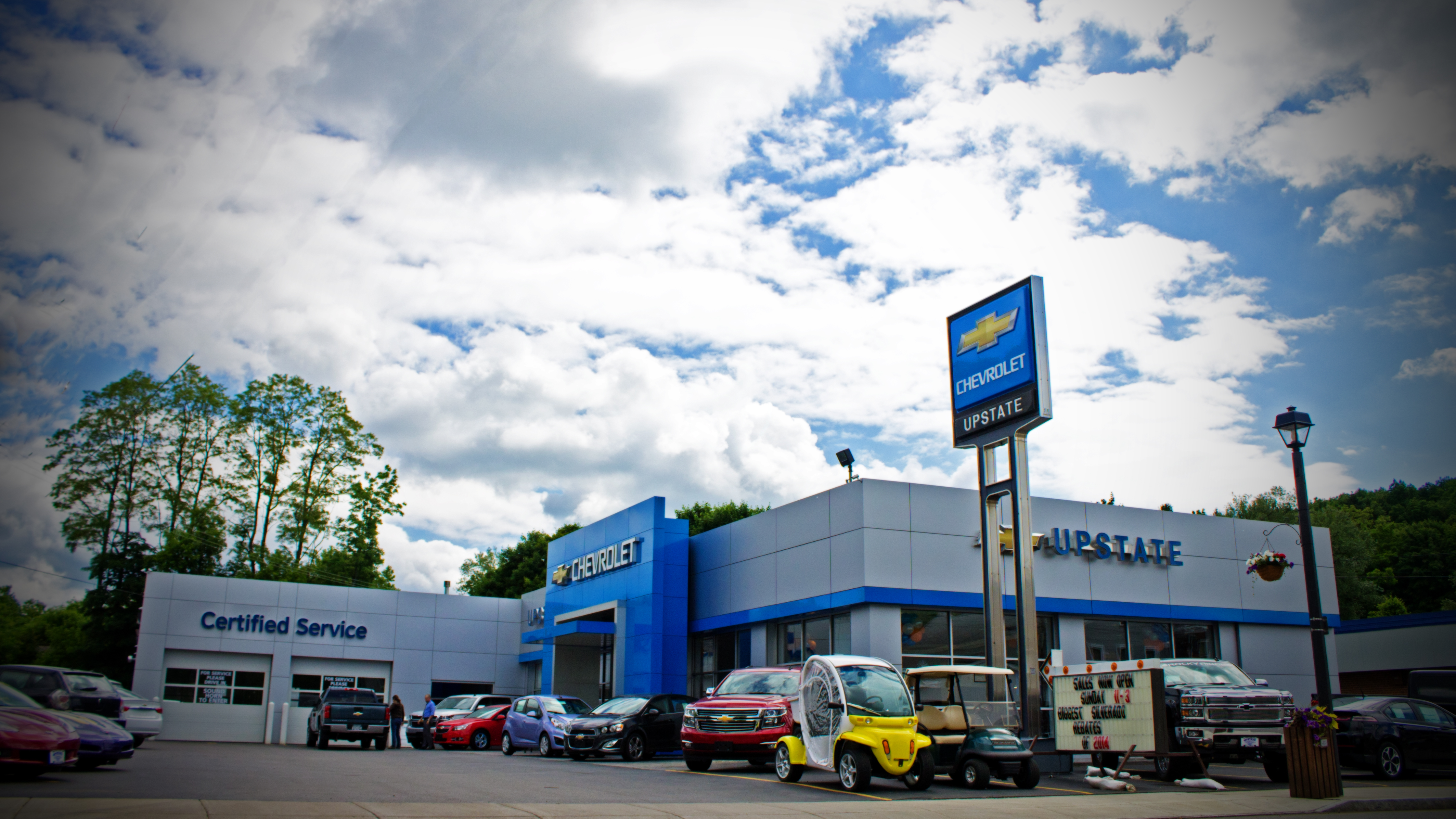 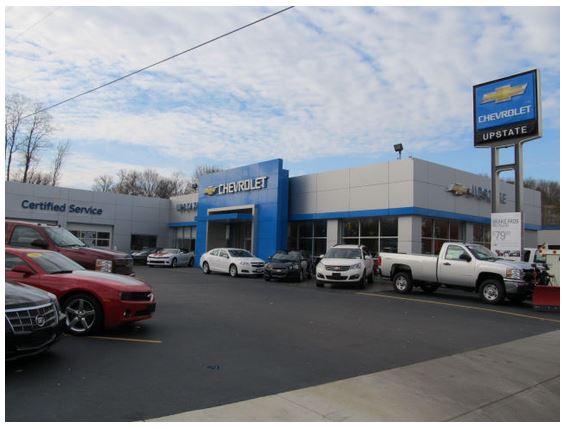 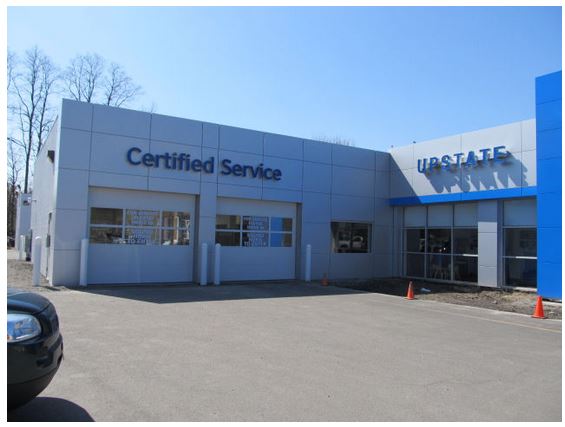 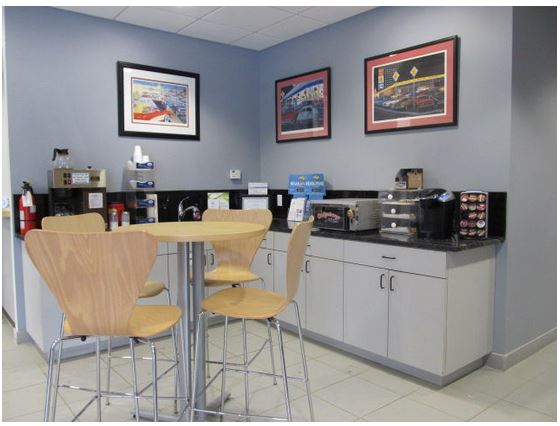 I showed up unannounced and the people were fast and

I showed up unannounced and the people were fast and great. Al went over the vehicles more than any place I have ever been to. Very knowledgeable and I drove away with what I wanted within hours.

I bought a 2016 Ford explorer from the Holland store.

I bought a 2016 Ford explorer from the Holland store. The salesman, Mike Litwin was a pleasure to work with. Fair, honest and no pressure. I feel like I got a pretty good deal and I would recommend them if you are looking for a car.

Will buy again when I want another heavy duty truck.

Michael, we are very happy to have provided you with such a positive experience! We are always more than happy to assist you if anything else comes up. Take care!

April 6 2033 I came in with a 2012 impala. complaining of a grinding noise advised by your service manager Brake roters were rusty and should be turned. service was completed 353.84 .Left with the same noise I came in with now ad vised noise was coming from the transmission> I feel the problem was missed diagnosed and service performed wasn't necessary because it was not the problem was advised to come back for transmission inspection for another 129$ can't afford another guess

Hello, Thank you for your feedback. We absolutely strive to provide our customers with an efficient and professional service experience, so we are disappointed to hear that yours was not up to par. Please contact us at (877) 463-0897 to discuss your concerns, as your satisfaction is of utmost importance to us. We hope to hear from you. Take care!

Absolutely great place to buy or just get information for...

Absolutely great place to buy or just get information for future sale. Keith G. And Ken O. Have restored my faith in people. These two made me feel as if I was family. Can’t say enough on how great the experience was due to the quality of service and care given by both of them.

January 17, 2020
By Michael and Allison Eula from Niagara Falls, NY

Mike Walko and Ken Oswald are excellent. They are friendly, respectful, and endlessly helpful and patient. This is why we have bought four automobiles there.

Gave me what I wanted for my trade in, no hassle salesman, paper work was quick and easy. Overall great experience. Definitely going back to buy my next vehicle

A dealership and sales team

Fantastic sales team. The entire process was quick smooth and absolutely no pressure. The dealership is warm and inviting. I definitely will be back when we need to buy a new car or truck!

Would give a 0 if possible.A few weeks ago my vehicle...

January 8, 2020
By Doseofruthie on DealerRater

Would give a 0 if possible. A few weeks ago my vehicle had this issue where water dripped inside the filler neck, froze, and would not let the flap open so i could pump gas. The 2018 chevy equinox has a pressurized seal on the door so there is no gas cap. Took it in to this dealership, and a couple workers came to the conclusion that because they had never seen or dealt with an issue like this and had no idea how to properly fix it, that they would break the flap and remove the ice. They looked up my vehicle, saw it was out of warranty, and advised me the part would not be covered by warranty but since they were causing the damage, they would be required to fix it. This decision was made by an employee named Caden, but he discussed it with another tech that was working. He ordered the part, and 3 weeks later confirmed it came in and scheduled an appointment for them to replace it. Here's where the story gets more fun... Today I used PTO to bring my car in and have the part replaced and get an inspection. About 20 minutes after i left, Caden called and advised me that his manager, Jesse, has decided that because my warranty is void, they will not cover the cost, and though they broke it, they won't fix it and it will cost me around $430 to have the part replaced. I declined the thoughtful offer lol What I don't understand is why Jesse is pretending as if his company was not aware of the warranty being over, when his employee Caden is the one who advised me that my warranty ended when i first showed up there in the beginning of December, and told me that because he broke the filler neck, his company would be required to replace it. The best part is, after they completed the inspection they asked me to sign some paperwork... I thought it was odd that they asked me to sign two separate packets and had the second packet carefully placed under some inspection invoices so that only the signature area was visible... turns out, the partially hidden packet was the paperwork for the filler neck that they don't want to be responsible for. The first packet was the inspection paperwork, so why they went as far as using other invoices from that packet to cover up the service order and agreement for the filler neck, even paperclipping the invoices to the top, in attempt to fool me in to signing it. When I started questioning about it, I was told they need the documents, I can't have them all but incan have a copy of the cover sheet, and I need to sign both packets for the work performed. I disagreed, they have my signature for the work they performed, which was the inspection. I declined finishing my signature on the second packet, and ripped my first name off so hopefully they don't try to claim I signed it knowingly. Always be sure to know what you're signing, because these guys tried tricking me in to signing documents that said I would be responsible for the part that they intentionally damaged. I called Corporate Chevrolet and explained to them what happened, but I don't expect much. There is an open case for now. All I want is for others in the community to be aware of this incident so they can be cautious, I have heard of other capless gas tanks having an issue and I would hate for them to get roped in to shenanigans like this... i have pictures of the signature i had to remove because of their unethical behaviors.

Rating breakdown (out of 5):
2 people out of 2 found this review helpful.
Show full review
4.7

Dealing with Mike was a good experience. I would definitely consider Upstate again if we are in the market for another truck. Thank you and have a good holiday

Rating breakdown (out of 5):
0 people out of 0 found this review helpful. Did you?
Show full review
See all 98 reviews