See all 15 vehicles from this dealership.

This seller has been on Cars.com since May 2021.
ZRV Auto Inc. is a family-owned and operated car dealership located in the heart of the city of Brea. Throughout the past decade ZRV Auto Inc. has satisfied thousands of customers by providing quality new and pre-owned cars and trucks for sale or lease at affordable prices.

Our core values at ZRV Auto Inc. are quality commitment integrity and customer satisfaction. We treat the need of each individual customer with paramount concern. We know that you have high expectations as a car dealer we enjoy the challenge of meeting and exceeding those standards each and every time. Allow us to demonstrate our commitment to excellence. 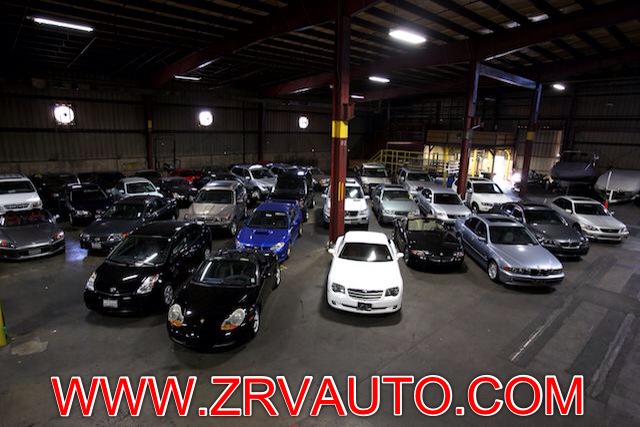 Started off positive but 5 months later and I still have no title. Even with COVID it should not take this long. I can’t drive my car it is inconvenient to have to pay people and you own a car fix my paperwork ZRVAuto

Such an amazing dealership! Found the car I wanted on Car.com and went to go check it out. Made a 2pm appointment with Zora for inspection and test drive. Upon pulling up to the dealership we noticed that there was no lot. All the cars are kept inside. I thought that was great because it keeps the cars clean and protected. We saw the Audi A4 that we were interested in and man was it clean. It was a 2008 with only 70k miles on and it was immaculate. We inspected the car and Zora just let us do our thing. He didn't hover over us like some other dealers. He left is alone and just popped in every now and again to see how we're doing. Zora let my wife and I take the car for a test drive while he stayed at the dealership. After the test drive we fell in love with the car. We worked out an amazing deal!!! Zora was willing to listen to our offer and we came up with the right numbers. This entire time we felt absolutely no pressure. Zora was attentive, patient and professional. A day later an oil sensor warning light came on. I called Zora and even though the car was sold as is with no warranty he told us to bring the car back and he would take care of it. He brought it to a certified mechanic and replaced the part with a genuine OEM Audi sensor free of charge. Problem solved. I mean who does that. If your interested in buying a new car come check out ZRV Auto. Clean facilities, clean cars, no pressure, great deals.

I'm trying to buy a used car and the dealer is playing games. They say they "finance anyone" which is a lie because they are demanding more down payment money to get the car. Refusing to communicate. Yesterday they tell me to talk to them today, and today I talk to them and they refuse to talk. Its like they are rejecting my business and aren't trying to sell cars. Waste of time.

Z Worked very hard to get me in my car of choice. He even stayed later to accommodate me for this time of purchase. Great inventory of vehicles and loved the service. Thank you Z!

My husband and I have been looking for a vehicle for several weeks. We have been to large and small dealerships alike, and we never felt like the salesmen cared about our needs one way or the other. However, Zora at ZRV Auto was very personable, open, and honest with us. There was no pressure whatsoever, and the buying experience was quick and easy. His facility is clean and tidy and that says a lot about someone. We highly recommend Zora to anyone looking for a no nonsense approach to buying a used car.

Just bought the car so doesn't have much to say yet but got the car that I want and zora was honest and gave me a quick and objective service different than the other dealers. From what a saw they are trustful and do the best to give you a good deal working with the possibilities.

Great customer service! No pressure let You test drive as long as you want ! Easy and simple buy with no hassle or change in original price expect tax and registration fee... car works great and drives awesomely bought it a few weeks ago now

ZRV set me up with a dream car

Went to ZRV to look at a 2010 BMW with low expectations. The price was too good to be true, the mileage was high, and I expected it to be worse then others that I was looking at, that were selling for $2000 higher. I got there and the car was CLEAN, and LOADED, and was 10X nicer then anything I was looking at in my price range. Working with Zora was awesome. I wanted to get a dealer to check out the car, so I found a recommended dealer in the area, and called back to Zora the next morning. He ran the car over there and I had a Pre-Purchase inspection done on the car. when I got the report, there were several items of concern, and other items that were good negotiating items. I told him I was concerned with the leaking oil pan, needing a new gasket, that was really my main concern, and he said he was already fixing it as we were speaking. Other points I used for price negotiating were the windshield wiper fluid tank was not connected. He re-connected it and found it needed a new pump, so he fixed it. I told him that I wanted to lower the price because I was going to have to do the rear brakes, and the front tires were going to need to be replaced soon. Also, one of the Halo (daytime running) lights was burned out. Zora put in new brakes, and lowered the price of the car anyway, based on the tires and halo light . So I bought the 2010 BMW 535I, fully loaded and clean AF!!!!! Then, not 24 hours later, I had to tow the car back to ZRV. I talked to Louis and said the car was not charging the battery, and the dynamic drive function was malfunctioning. Louis said they had a car on the rack at the moment, but would get a chance to look at it by the end of the day, and I would get the car back tomorrow. Turns out the serpentine belt broke, and the symptoms were obviously related to the problem. Now at this point, the "SOLD AS-IS" could have come into play. They had every right to tell me, "your car, your problem", and I would not have been mad at them, because I did buy the car AS-IS. But Zora replaced the belt for me, and cleared all the codes in the car and gave me the car back in "better then it was when I drove it off the lot the day before" condition. This saved me probably $500-$800 dollars for the repair, and shows that this dealer (Zora) will stand behind what they sell and are very trustworthy and reasonable. I hope to not be buying another car for 5-7 years from now, but when I am in the market again, this is the first place I am gonna start my search. Thanks guys, you made this purchase very easy and pleasurable.

My wife and I bought a minivan from ZRV, and honestly this was one of the best experiences. I have nothing but good things to say about these guys! We never felt pressured or haggled which made us really want to buy a car from these guys. We got a great deal on our new van and we really are happy we gave ZRV our business. When we are ready to get another vehicle we for sure will use ZRV.

Rating breakdown (out of 5):
0 people out of 0 found this review helpful. Did you?
Show full review
Read all 63 reviews