See all 152 vehicles from this dealership.

This seller has been on Cars.com since May 2020.
We offer one of the largest Buick GMC inventories in Kansas. Find the perfect vehicle for your lifestyle at Hatchett Buick GMC. We are the only Buick GMC dealer to offer you with our Limited Lifetime Warranties on all new and most pre-owned vehicles. We take pride in helping you find the one that's right for you. Whether you're looking for a new or pre-owned vehicle our sales team can help with our no-pressure philosophy. We will make your car buying experience efficient and stress-free. Call us today at (316) 768-4950 to schedule a test drive.
Hatchett Buick GMC - home of the Hatchett Lifetime Warranty 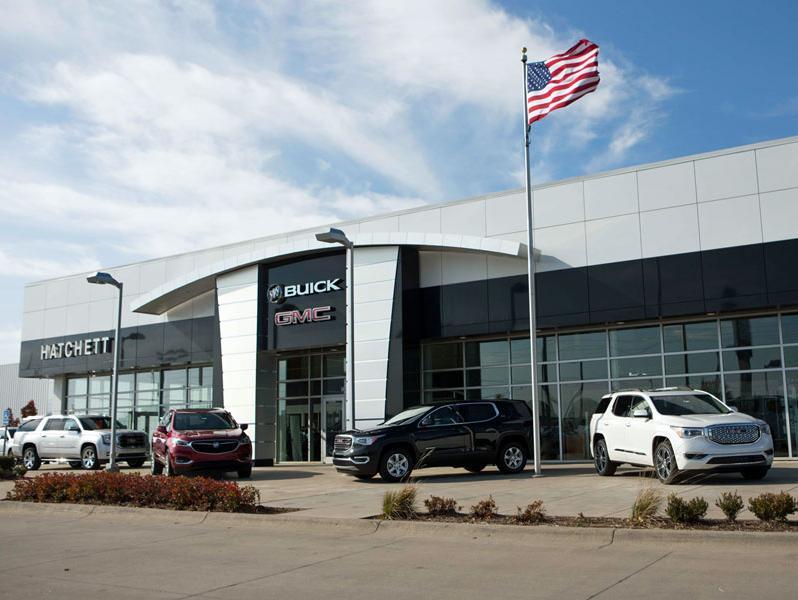 Your Crazy to buy your car any where else!!

I was put in a very rough situation when someone backed into my car, an totalled it. So I had to purchase a car in a pinch! Found my new car online website, an was invited to come see it in person . It was waiting for me when I arrived. Felt like we were the VIP! It was amazing experience all together. (Parker Tanner ), is our sales Rep from now on! Fastest purchasing of a car IV ever experienced!! It was extremely painless. No spending your entire day waiting. Thank you so much to the Hatchett Buick Family for making a terrible situation turn into a dream come true!

Alan was our salesperson. He went above and beyond to...

Alan was our salesperson. He went above and beyond to make sure we got what we wanted. The overall experience was easy and fantastic. The process was simple and it didnt take an entire day to accomplish. Cant say enough good things about our experience.

I have used Hatchett service exclusively for many years....

I have used Hatchett service exclusively for many years. Though we don’t have the most expensive cars we are still treated like family when we’re there. Eric and his team are knowledgeable and are able to explain things to a very mechanically uninclined customer.

Fast service. Great people and place. I?m been a customer for several years.

February 28, 2021
By akragnes on DealerRater

Alan Spencer sold me a 2018 Acadia and I thought that I was dealing with a person of integrity. I discovered after the sale that Mr. Spencer was not honest and evidently views. me as an idiot. Just another stupid buyer to be lied to. What he did was minor and I will not go into details. If you want to know ask him, just beware that when a person will mislead you on minor things how can you trust anything he says. It is no wonder that a received a negative reaction when I told friends in Wichita, I had purchased a vehicle from Hatchett.

Dishonest. The sales staff at Hatchett are misleading and dishonest. I’m an out of state buyer from Denver, CO. I called to inquire about a 2017 GMC Sierra Denali and spoke with Mike Hauschild. I told him I was from out of state, saw the photos of the vehicle, however you can only see so much from photos; you can't see small minor damage. I asked him to walk around the vehicle with me on the phone and thoroughly inspect the truck for anything at all no matter size because I can't see them from the photos. I trusted his word. He told me there’s a rock chip on the hood and a scuff on the tailgate that could polish off, other than that he said the truck looked perfect. We discussed my trade over the phone which he said they could offer $3,500. I looked it up on Kelly Blue Book and selected the correct options and selected the vehicle condition as "good". If you're not familiar with KBB, the vehicles are rated fair, good, very good, and excellent. KBB states "good" category as "Has some repairable cosmetic defects and is free of major mechanical problems". KBB said the trade in range is between $3,800-5,700 with middle being $4,700. My vehicle has no mechanical issues, has 1 scratch on the driver door, and very light hail on the roof. The GMC I’m interested in is listed on cars and the Hatchett website with 32k miles, but the vehicle actually has 34k miles. I bring this up to Mike and told him according to KBB this brings the truck value down $500. He said to me, if it is a matter of $500, he is sure they can make a deal. I agree to drive from Denver to Wichita to trade in my vehicle and buy the GMC, which is over a 7 hour drive and over 500 miles. Again, I am trusting Mike's word on behalf of the Hatchett dealership. Prior to leaving, I see an advertisement on the Hatchett website for "up to $1,000 over KBB trade in value". I sign up for the coupon, got a call informing me they would email the info and to present it to the sales manager for the coupon to be applied. I get to Hatchett and the truck is parked out front. I walk up and within 30 seconds, I see the chip and scratch Mike informed me of, as well as chips and scratches on each bedside, a dent on the roof, a dent on the left bedside, a chip on the fender, and the upper tailgate and right bedside molding are scuffed and shredded. Lie #1, the condition of the vehicle as was described on the phone. At one point on the phone prior to me driving to Kansas, Mike bragged to me of having over 30 years of experience in car sales. If that is accurate, he knows what buyers are looking for in the condition of the vehicle and flat ignored it and lied to me to get me to make the trip. We go inside to discuss the sale and numbers and they tell me they’ll only offer me the $3,500 for the trade on my car and won’t budge on the sale of their GMC. The sales manager said to me the hail damage on the roof is about $500-$600 of damage. I ask about the trade in coupon for up to $1000 over KBB value and the sales manager told me because of the hail damage they won’t offer any more. If you take the middle ground trade value of $4,700, subtract the $600 of hail damage, that's still $600 under fair trade value. Lie #2, they told me with the online coupon they’ll offer more on trade value, and the manager flat ignored it and said he can't do anything. I told them I'd take the $3,500 for the trade, but they need to come down on the price of the truck. They said they wouldn’t budge a dollar. Lie #3. I was told before making the drive, or even the commitment, that if it was a matter $500 they’d be able to make a deal. I was lied to 3 times, the Hatchett sales staff assumed if I made over a 7 hour drive, there is no way I'd leave without the truck, so they can just take advantage of me. I liked the truck and wanted it, but never would I give that much money to a company who thinks they can lie and walk all over their customers as they did.

Rating breakdown (out of 5):
0 people out of 1 found this review helpful. Did you?
Show full review
1.0

Absolutely the worst service I have ever received. Three...

Absolutely the worst service I have ever received. Three weeks to repair an oil leak...twice. No vehicle if comparable value offered. Holiday ruined. Refused to work overtime to make it right. Wouldn’t take my little red wagon to Hatchett for service.

Bought a new 2020 Buick Enclave, transmission went out under 600 miles. Everyone wants to point the finger at someone else meanwhile we are without a car for almost a month. All you get from them is “unfortunately”. Also the finance guy is a real jerk

They took good cadre of me and in a timely manner. They did what they said they would do and were friendly.

Rating breakdown (out of 5):
0 people out of 0 found this review helpful. Did you?
Show full review
See all 309 reviews