See all 75 vehicles from this dealership.

This seller has been on Cars.com since January 2022.
As we celebrate our 50th anniversary it's important you understand that as the oldest Toyota dealer in Texas we learned a long time ago that great customer service and the lowest prices anywhere equal a great buying experience. I personally would like to invite you to come buy and experience world class service selection and great prices for yourself.
Driving Laredo Forward! 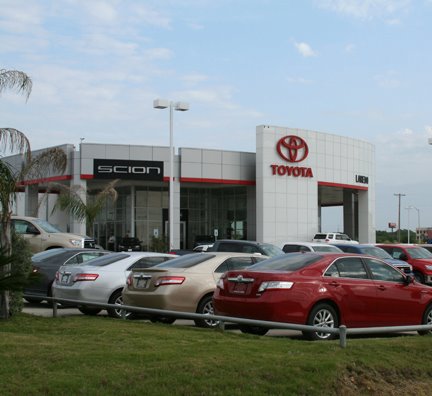 Just the worst experience ever still having issues...

The shop is extremely friendly and came through for me in...

August 31, 2020
By Christophergehlen on DealerRater

The shop is extremely friendly and came through for me in a pinch. GREAT TECHS! They fixed it where others could not. Going to the dealer turned out to be much cheaper than the shop estimate I got from an independent shop.

I got an offer from North Park Toyota San Antonio. When I called this dealership they said they would match it. I told them I had an appointment in San Antonio already and they said for me to cancel it as they were going to save me a trip. I get there and slowly they began to add money to the deal. To make the long story short they didn’t keep their word and added more than $2,500 to the deal I had in San Antonio. I ended up leaving after spending over three hours there and went straight to North Park, where I closed the deal on the price they originally promised.

Rating breakdown (out of 5):
2 people out of 2 found this review helpful.
Show full review
5.0

Rating breakdown (out of 5):
0 people out of 0 found this review helpful.
Show full review
3.0

Terrible customer service you get a run around

Took in my car they ordered parts. No one calls to say the parts are in. The parts are the wrong parts and what I took it in for did not get addressed even though I was told it would. Now I call and it says it's after hours at 2:30 on Thursday. The service manager says he would call me back right away yesterday after he looked into it never got a call left him a voicemail late in the afternoon I still haven't heard from him. Way to go Roger latte

Rating breakdown (out of 5):
1 person out of 1 found this review helpful.
Show full review
1.2

October 14, 2015
By Mikeeaton on DealerRater

When I started looking into the new Tacomas, I went to Toyota of Laredo first, since it is the dealership closest to home. I started by looking online at their inventory. At the time, they advertised to have 57 Tacomas "available." Most of us assume that means they have the item in inventory. It turns out, it's a wording trick (the first of many). When I arrived at the dealership, they had one on hand. Despite this, I was prepared to work out a deal. The salesman, Alberto "Tito" Garcia and I went through the paperwork, but I noticed that they were trying to skip over important information. When the salesman wrote up the first deal, he left off the interest rate. When I asked about it, he told me that it was computed for 4.9% through Toyota finance. I told him no, and that I would get the loan through my bank. They also wanted me to agree to buy a truck that they didn't have on hand, and that I hadn't seen--I was willing to buy, but I had no intention of buying it without seeing it (and the invoice). it really hit the fan, though, over the value of my trade in. They had grossly undervalued my truck (I had checked through BlueBook, kbb.com, and I had had it valued at the Ford dealership). So I told the salesman that I was leaving, and I told him bluntly that I knew they were trying to rip me off and that I didn't appreciate it. I had to ask several times to get my keys back. Later that same day (Saturday), I received a phone call from out of area. It's someone asking about my experience at the dealership. So I laid it out for her. On Monday, I get a voicemail from the salesman, Mr. Garcia, wanting to work out the issue. I had cooled off, so gave him a call the next day. He said he didn't know why he had called and left the voicemail. At this point, I gave up. Do yourself a favor. Avoid these people - drive a little and buy your new car somewhere else.

Rating breakdown (out of 5):
4 people out of 4 found this review helpful.
Show full review
1.2

Deceitful practices! I was sold a new car not used.Code of Conduct describes a collective commitment to the highest ethical standards. It also is required by law to disclose any damage to a vehicle being purchased as new. I have not yet disclosed this breach to my financial institution. Toyota Laredo had betrayed the confidence and due diligence that is their responsibility to full disclosure. ..Do the dutiful Michael Powell and contact me regarding this compliant. Hilda Reyes

Rating breakdown (out of 5):
3 people out of 3 found this review helpful.
Show full review
5.0

September 30, 2014
By tonyarg on DealerRater

I took my 2012 Toyota Sienna for a wheel alignment and as soon as i got there, i was provided with an excellent polite greeting by service representative Mr. Centeno. Service was provided on promise time and at modest price. Vehicle repair was excellent. Thank You.

June 20, 2014
By Freedomishii on DealerRater

I have been getting my Prius it's oil change upon my purchase from another dealer bc at this time it was a Prius crisis when Japan had the earthquake and ppl panicked ( like me) lol Every oil change is an amazing experience. I get called by my first name as soon as I pull up. I have a 4-5 year old now but they have been with me through the years getting oil changes. The place is always clean, with cold water, TV on , toys for kids and clean bathrooms. The employes there has always been patient with me when it came to my kids. They always smile and greet them too. The reason I'm leaving a review after a few years if customer satisfaction is because of one person . His name is Loyd. He is in the service dept. I called Toyota last week bc my air stopped blowing in my Prius and I live over an hour away. I was imeditaly passed to Loyd. I didn't realize who I was speaking to at the time . He told me to hit the bottom of my dash and the air should come back on. Let me remind you, we r in south Texas hitting the 3 digit temps daily and I have my 2 kids. This guy saved me from driving all that way . Well a few days passed and it stopped again. I didn't hesitate to get it repaired with Toyota of Laredo. Matter of fact I got 4 new tires while I was there. Oh no I must not leave this out. I was driving to laredo going grocrey shopping. Loyd told me it would be a few hours which was no problem. I asked him if the shuttle could take me to HEB to shop , he said yes. I told him I was shopping and getting a lot bc I lived far away. They dropped me off... The guy driving the shuttle is so nice .. I didn't get his name. When he came to pick me up. He helped me load all my groceries in the shuttle and when I was paying for my tires and etc he had moved my car , backed it up to the shuttle and unloaded over 300.00 worth of groceries. These ppl are just awesome.. The popcorn man made my kids smile from here to high heaven:) this company will be selling me my next car. I want to thank all of them. Even the ones that are not seen:) I'm not proof reading bc in on my phone and it's to much to deal with! Hope this helps someone

Just bought my new pre-owned 2008 Prius! I got my old 2007 Camry paid off and a great deal on it. Its certified, the Manager was extremely pleasant (thanks Ruben) and the sales staff all were kind. My salesperson knew all the features and was able to help me. I was in and out quick. Thank you again!

Thank you so much for your review! Were so glad we were able to help you in all your needs! Please make sure to visit us in the future!