See all 167 vehicles from this dealership.

This seller has been on Cars.com since January 2019.
Chevrolet of Everett is proud to sell and service New Chevrolet and pre-owned vehicles in Snohomish County. We are also a retailer of OEM General Motors parts and accessories. We provide excellent customer service and "No Stress" pricing on all vehicles we sell. Part of the Harnish Auto Family.
Check out the All New Chevrolet of Everett! Home of No-Stress Pricing & Oil Changes For Life 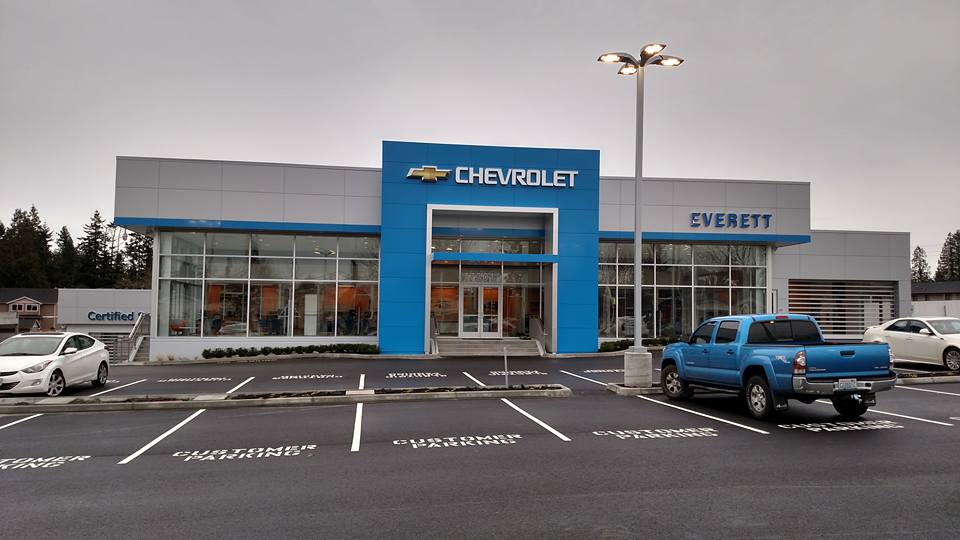 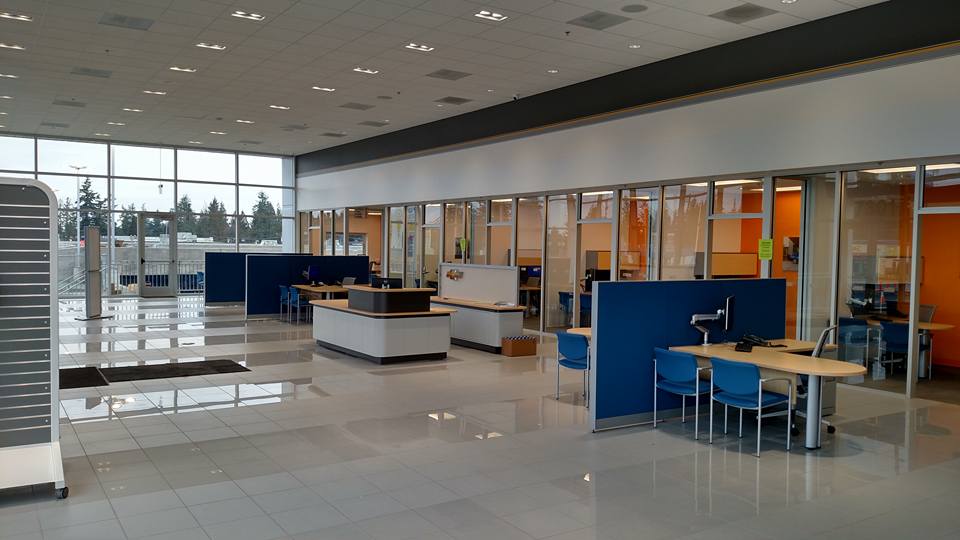 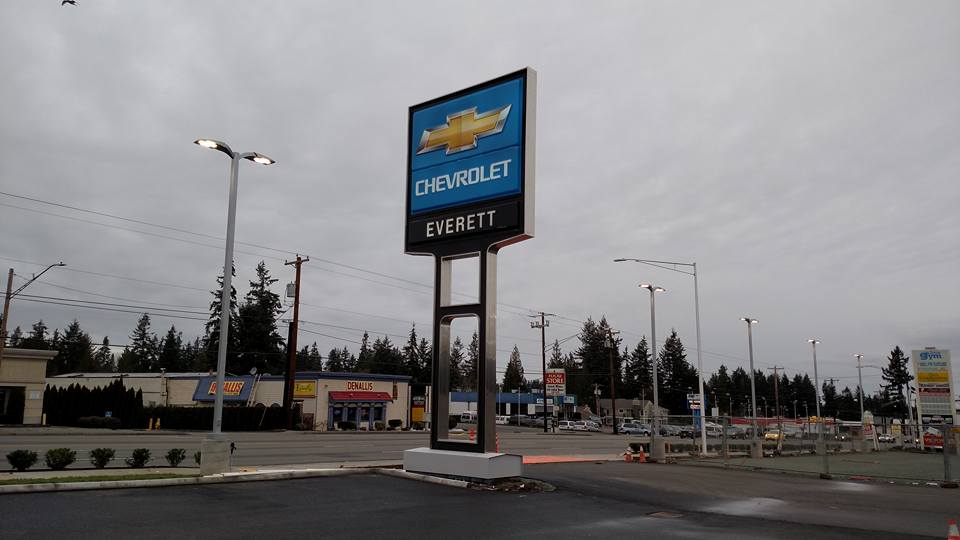 Jury is still out

Decided to trust their service dept as they treated my daughter well. But the quote I got for a door handle cable was crazy high. Almost $600. And they lied about what was broken as I had already looked to see what it was. I bought the part (genuine GM) online and installed it myself for under $180

Hello, thank you for leaving us feedback. We are disappointed to hear that your experience was not a positive one. If you'd be willing to provide more feedback, please reach out to us at (425) 265-8000 so we can assist you further.

We just drove off the lot with our new (used) Tahoe. From...

January 4, 2022
By Richard.Nolan.soderstrom on DealerRater

We just drove off the lot with our new (used) Tahoe. From our initial phone contact with Joey to finalizing the paperwork with Nick…every step of the process was professional, courteous, friendly and smooth. We are pleased with the level of service and truly impressed with this women owned and managed business! Richard and Randi Soderstrom

1 star because 0 isn't an option. From the salesman...

1 star because 0 isn't an option. From the salesman blowing our speakers, to telling me the "clicking/clanking" sound in my front end is water "sloshing" around in my battery, to it taking 3 people, 2 dealerships, 3 trips, 400+ miles, and 2-3 weeks to simply install a trailer brake module (4 wires, pre-wired from factory,) to the Service Manager Scott blowing off our appointment. I have a copy of my service records, from day 1. They paint a picture of laziness, incompetence, and scamming behavior. Avoid this dealership at all cost. Doing business here will cost you lots of time, energy, frustration, and money.

Purchasing a vehicle can be an awesome experience!

I came in hoping to purchase a new car. Was disappointed that there were no new Chevy Equinoxes, but Ali Blaibleh guided me towards a beautiful 2019 Equinox with low miles. Ali was friendly, knowledgeable, respectful and never pushy, which has often been the case for me with other salespeople in other dealerships! He even drove from the dealership in Everett to Redmond to pick me up the day took possession of my Equinox. Instead of making me wait while Ali was helping another customer, he introduced me to Erik De Chatonnayree, who patiently, explained all the amazing features my Equinox has! A lot for this old brain to absorb, but Erik was so patient and informative and I have no doubt he will always be there for me in the future! Thank you so much for making this such wonderful and exciting experience!

Hi, your wonderful feedback and rating mean a lot to us. Thank you again for choosing Chevrolet of Everett, INC. and we hope to see you again.

November 4, 2021
By Marjorie from Lynnwood

I can't say enough what an easy process it was purchasing a vehicle here. Ashley was extremely knowledgeable about the vehicle and I never felt pressured to buy. The process was quick and easy and I will purchase from them again!

We're glad to hear you found our staff was so knowledgeable and helpful! Thank you again for the great review!

Jen in service what an amazing women!! She dealt with all...

October 7, 2021
By Whidbeyislandliving2 on DealerRater

Jen in service what an amazing women!! She dealt with all the issues kept me up to date and stayed on top of the work order until the end! Because of her I bought a new used car last night!

Hello! Thank you so much for taking the time to leave us a nice review. We appreciate your business :) -- Camille Burley, Marketing Manager

October 7, 2021
By Whidbeyislandliving2 on DealerRater

Excellent customer service. Great sales person name Erik deChatonnayree. He answered all of our questions. Showed us the features on the truck. Stood by the everything. Thank you so much Erik

Hello! Thank you so much for taking the time to leave us a nice review. We appreciate your business :) -- Camille Burley, Marketing Manager

Would not recommend them at all to anyone. No one would...

Would not recommend them at all to anyone. No one would get back to me on a break down of the numbers for days, And kept getting emails from them saying they are interested to buy my vehicle, keep telling them won't sell, just trade. Then when a deal was made, DREW TODD refused to send a purchase order to me/my bank so I can get the financing through my bank, so I can get the low loan rate and payment I want, wants it done in house, through them, witch my bank said it does not garenteed to be the same as what we talked about. Not impressed at all with these guys,

It was helpful to receive the video by the person servicing the car. Also, thank you Dan for the info on upcoming purchase of new tires we will need to make. The Equinox is not just considered to be a drive-it-ride-in-it from point A to B; everything centers on the safety and reliability for family/friends and safety of those out on the streets.

RUN AS FAR AS YOU CAN. DO NOT WASTE YOUR TIME OR $

DO NOT EVEN BOTHER . There is ZERO "customer service" here. The big wigs are ALL UNPROFESSIONAL. It was 2020. I was dealing with Post Partum Depression aftet just having a baby. Lost my job due to covid. Totalled my 2016 cruze. I was a returning customer to the Harnish Family Chevrolet. I confided in this man, and he turned out to be the most crooked unprofessional person I've ever had to deal with, besides his higher ups, THEY ARE EVEN WORSE. I spoke to 7 people THIS WEEK, asking for their findings during their SAFETY nspection. I was pushed off repeatedly, when i finally got to talk to the general sales manager, Michelle Owens, she was unprofessional, rude, and appears to be covering both their tails.... she repeatedly hung up on me. When i called and asked for the office managaer Loretta, the office Bully Michelle Owens took the phone and interrupted. Hollered at me, and hung up. ALL I HAVE ASKED FOR IS A SAFETY INSPECTION ON THE VEHICHLE I FIRMLY BELIEVE SHOULD NOT HAVE BEEN SOLD TO ANYONE. MY CHILDREN AND I COULD HAVE BEEN SEVERLY INJURED OR WORSE, COULDVE DIED DUE TO THE CONDITION I HAVE HARDLY DRIVEN IT. this entire dealership is more unprofessional than joe shmoe druggy on the corner. I was lied to, told i was unable to back out of the "contract" Bob refused to give me my $1500 cash back, and proceeded to charge my debit account $1500 AFTER I TOLD HIM I DID NOT WANT THE VEHICLE. he refused to refund my money, he forced me to take the car, LYING THRU HIS TEETH telling me i was legally bound by contract and i was the new owner and i was told to "accept the gift that was given to me" When i demanded my money back, and told him he took then$1500 after thr phone call of me saying i no longer wanted the car... he stated "it was legal and by the book, because i signed" WHICH WAS A WEEK PRIOR TO ME TELLING HIM ON THE PHONE I DIDNT WANT IT, WAS BRINGING HIM A SET OF KEYS FOR A TOTALLY DIFFERENT CAR I WAS GOING TO FINANCE BEFORE i lost my job. Also the day i signed for the Ford, Bob Flood received a call from someone, and i could only hear his end of the conversation, but then he said "man this guy is trying to back out, and i have 3 days til the end of the month, i have to get these loans thru because theres a deadline with the bank" this was JULY 27TH, 2020. (at this time he was pushing to finance me before end of the month, the bank did not finance me which is when he offered me the whole sale part it out junk car) This man made nasty comments in a joking manner.... "if you leave the lot and the transmission falls out, you're responsible" "if the car breaks in half, youre responsible" Ironically enough, the transmission prob couldve fell at any time.... and this week, i called for 2 days, asking for the "SAFETY INSPECTION" done prior to him FORCING ME TO take the keys and leave while refusing to give me my money back, stating his boss was not going to take the loss (because they replaced brakes and tires without me authorizing ANY WORK on the vehicle that i no longer wanted , and then wanted me to pay EXTRA, which i declined) and his boss WOULD NOT LET ME OUT OF THE CONTRACT. This man convinced me and my mom who gave me a ride to everett, that there was ABSOLUTELY NOTHING I COULD DO BECAUSE I SIGNED. At the time I signed paperwork... i had already spent 3 days with 2 young kids and A BREASTFEEDING INFANT, and 14 hours in the building.... before i signed i clarified if things would be on hold until the inspection... BOB FLOOD AGREED, and said i would receive a call after the inspection, and i said i would make my decision then. HE HELD MY MONEY, after the loan fell thru.... when he called and asked me to pay more, i said i didnt want the vehicle, HE SAID " ITS YOUR GOD GIVEN RIGHT" BUT THEN PROCEEDED TO CHARGE the other half . HE IS A REAL LIFE WORMWOOD, WHO PREYS ON POST PARTUM MOTHERS, WITH YOUNG CHILDREN, AFTER HE SEEN THE VULNERABILITY BECAUSE HER FINANCE OPTION FELL THRU.

Hello, thank you for leaving us feedback. We are disappointed to hear that your experience wasn't a positive one Ashley. If you are willing to give us another chance, please contact us at (425) 265-8000 so we can understand your situation better in order to try and turn your experience around. I've forwarded the review to our management team and they are aware of your situation.- Thank you, Chevrolet Of Everett, Inc. - Christopher Thompson Marketing Manager