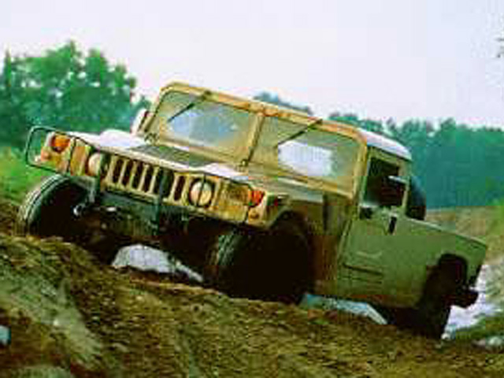 Our 1994 Am General Hummer trim comparison will help you decide.

In their gropings between genius and lunacy, inventors have developed cars that double as airplanes, convertibles that dabble as motorboats and vehicles that run on methane gas squeezed from chicken droppings.

Add AM General’s Hummer to the honor roll of dreamy impracticality.

Recently demobilized from military service, this car-truck-tank, go-anywhere carryall is capable of lurching from A (Alaska) to B (Bahrain) while climbing the Jungfrau, butting heads with rogue elephants and fording shallower reaches of the Atlantic.

Earthquakes fear this vehicle. Add a few sacks of quarters and it’s a Brink’s truck. If Robert E. Lee had had a squadron of Hummers, we all would be speaking Georgian. Arnold Schwarzenegger–a man known to eat sofas–owns four and stands tiny by comparison.

On the civilian market, though, the Hummer makes little sense.

It is seven-feet across or about the width of a freeway lane, and at 40 m.p.h. that’s a SigAlert. The sight and snorts of a three-ton Hummer have caused valet parkers to turn in their red vests. At a four-way stop, everybody quakes and nobody moves until the Hummer is out of sight.

Mostly aluminum surfaces are pocked by naked bolts, bare hinges and visible rivets. This vehicle is so outdoorsy and all-weather even its map pockets have drain holes. It has two-piece wheels and Goodyear Jungle Ambush tires that cost $450 apiece.

Still, as Gen. Dwight D. Eisenhower praised the jeep as one of the most important weapons of World War II, so Gen. Norman H. Schwarzkopf anointed the Hummer as the toughest desertfighter since Lawrence of Arabia.

That was blessing enough for AM General of South Bend–with Willys and Jeep in its corporate bloodline–to decide to transform the High Mobility Multi-Purpose Wheeled Vehicle (HMMWV) to mufti.

It comes in colors, including, naturally, Guardsmen Red. There are cup holders that have never seen a GI canteen. Also armrests, remote entry, power windows, glove box, real carpets and other sissy stuff.

Andre Agassi has bought a Hummer. It hasn’t done much for his tennis game, but it does appear to have earned him Barbra Streisand and Brooke Shields. When basso James Earl Jones cut some commercials for AM General, he happily accepted one of the vehicles in payment.

Despite all this civilization, the 1994 Hummer remains a commando in a C&R suit.

It is square and flat from all angles and so ugly it is handsome. Any similarity to a barrack block is intentional. A Hummer has space for half of Delta Force but still seats only four.

There is no insulation, just the power of a megawatt sound system to distract from the roar o f a 170-horsepower diesel slurping a gallon of fuel every dozen miles. Also the thumping of 37-inch tires locked in permanent four-wheel drive and trying to stomp through asphalt.

Thanks to enormous windshield and door pillars, visibility requires carefully coordinating the eyes of all occupants. Or mounting closed circuit television. Speeding tickets are not to be feared in a vehicle that grunts and chuffs to reach 85 m.p.h. Acceleration is best measured by lunar phases.

Every window is dead vertical and night reflections produce a sense of driving inside a planetarium. The interior is the center spread of an after-market catalogue. There is enough space between front passengers for Monopoly, a picnic lunch and conversations by bullhorn.

And as any Raiders’ scout will tell you, brute force doesn’t come cheap. Hummer prices start at $40,000 for a two-passenger hardtop, lumbering to more than $60,000 for a four-passenger wagon with basic creature discomf rts.

The Hummer’s warranty is three years or 36,000 miles–or 5 0 wars and three direct hits.

Diesel fuel costs about $1.45 a gallon, and reduced availability restricts refueling to a diminished number of Los Angeles service stations or the Flying J truck stop at Blythe.

The Hummer was designed to offer the strength and durability of a dumbbell, with a flexibility for multiple military purposes from PX runs to hauling grunts and ordnance over all terrains through every climate.

Since 1985, AM General has sold more than 100,000 Hummers to friendly forces around the world. It is a very serious 4X4performing the functions of several vehicles–ambulance, missile platform, weapons carrier and the beloved, ubiquitous, but outdated Jeep. To expect this hard-nosed military ideal to transition easily to softer civilian life is to believe that Alexander the Great retired comfortably to shuffleboard.

That the Hummer is available at all is a tribute to the lobby of those–including Schwarzenegger–who persuaded AM General there would be a market for an urban wilderness vehicle that is to Range-Rover what the battleship Missouri is to the QEII.

They were right. For every conformist, there is someone who likes polka-dot pit bulls. Today there are 1,000 Hummers beating up American roads, a 55-member Hummer Owners Assn. in San Diego, and one owner who believes in revertible roots and plays soldier with his Hummer painted in Desert Storm camouflage.

A spokesman says only 25% of civilian sales are to suburbanites with incomes to dispose on adult toys. That percentage will drop as novelty wears thin. Then, he says, the Hummer will be recognized as the perfect pack mule for ranchers, winery owners, desert trekkies, oil explorers, off-road racers, bush doctors and anyone who does business in great construction sites.

With 16 inches of ground clearance and springs tough enough to cushion the Golden Gate Bridge, obstacles may slow the Hummer, but they won’t block it. Not two-foot snowdrifts. Not axle-high bogs.

If the muck becomes a struggle, there’s an on-board compressor and a one-button system to reduce tire pressures for better traction. When sand is up to the steering wheel, there’s a 12,000-pound winch to heave you out.

Water certainly doesn’t dampen its spirits. The only problem is that hydrodynamics follow the flow patterns of aerodynamics and Hummers are as streamlined as house bricks. So water approached too fast will slosh over the vehicle, even over the windshield, and not swirl around it.

Back in the marginal civilization of the Los Angeles freeway system, a Hummer isn’t the happiest of ground-pounders. It huffs to enter traffic at a crawl. Steering via a surprisingly small wheel is light and a little twitchy. Industrial strength brakes are effective but lock easily.

But ag ain, the Hummer was designed for zones of primitive combat, not the Hollywood Freeway. Although some may argue that degree of comparative risk.

So you invest $60,000 in this unarmored personnel carrier.

When the feeling wears off, you can sell it to Ollie North as a campaign vehicle.

The Bad Laneclogger. Noisier than a sore drill sergeant. Too wide, tall, long, heavy and expensive.

The Ugly Bumper to bumper.

SLOW ON THE HWY BUT IT WILL GO ANYWHERE

December 27, 2020
By KENNY FRANCIS from BROOKINGS OREGON
Owns this car

I HATE TO SELL IT BUT THIS COVID xxxx IS GOING TO BANKRUPT ME IF I DONT GET BACK TO WORK SOON. MY LOSS YOUR GAIN 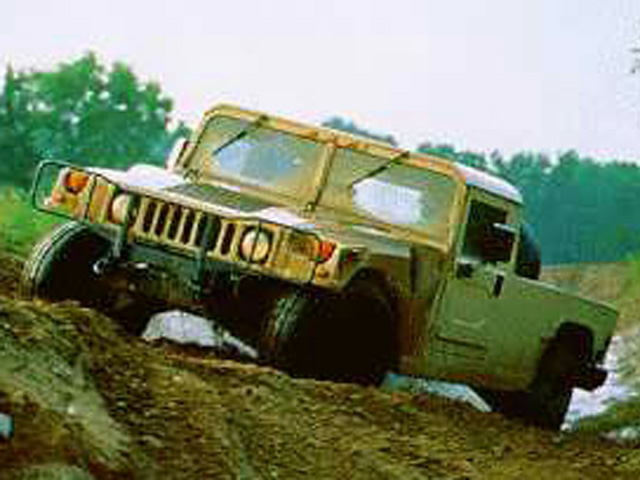