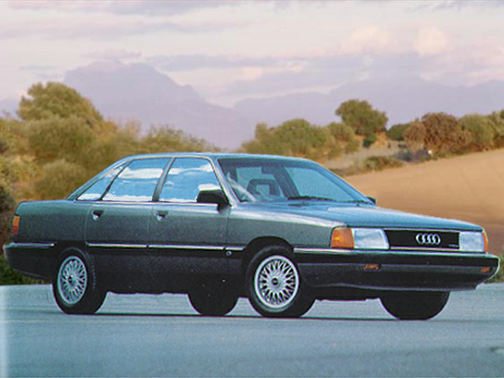 The company once known for stiff, harsh, unpredictable cars best suited for high-speed driving on the autobahn rather than any U.S. street, road, expressway, toll road or interstate, is making a sweeping comeback in this country.

First it was the Audi 100CS (Cartalk, Dec. 29, 1991), then the Audi V-8 Quattro sedan (Cartalk, July 5). And now comes the 100CS again, but this time with automatic transmission rather than the smooth-shifting five-speed manual, as well as the S4 sedan, a vehicle Audi refers to as the “spiritual successor“ to the 200 Quattro.

For years Audi was designed and built for European roadways. The focus was on speed to keep up with the Mercedes and Jaguars that may try to pass on the way to wine country.

Its new performance machines still are fast, but now they are comfortable, too. It`s one thing to build a vehicle that can travel from Hamburg to Munich at 130 miles per hour; it`s quite another to build one to take you from Rolling Meadows to Chicago or Evanston to Milwaukee, trips on which you might get up to 65 m.p.h. before the orange and black signs issue the April-through-October Chicagoland advisory: Road construction ahead.

The automatic doesn`t seem to rob the 2.8-liter, 172-horsepower 6- cylinder engine in the 100CS of any power. Audi had been known for delivering the power burst after you passed cruising speed, all the better for rocketing down the autobahn. Americans preferred livelier movement off the line, away from the light, down the merger ramp or into/out of the passing lane. With the 100CS, Audi focused on 0 to 60 m.p.h. rather than 60 to 120.

Regardless of transmission, the 100CS sports new sheet metal for 1992, while retaining those four locked rings in the grille and on the deck lid as evidence of its heritage. With the styling change came new dimensions, with wheelbase extended to 105.8 inches from 105.6 inches and overall length nipped to 192.6 inches from 192.7 inches.

Though you`d need a micrometer to measure the changes in physical size, you can feel the difference Audi pulled off by increasing front track-the distance between the two front tires-by two inches and rear track by one inch. That means you can be more aggressive in corners and turns without wiggle or wobble.

A trio of items we enjoyed included the infrared setting on the key fob, so you need only press the button to lock or unlock the doors; an automatic mirror adjustment, so whenever you shift into reverse the right outside mirror tilts down for a better view of the curb, meaning you can avoid scrapping tires against concrete (it tilts up again once you`ve engaged a forward gear); and the power sunroof in which you simply twist a dial in the overhead console and the roof opens/closes to a pre-set space without you having to hold your hand on the knob.

The full-time all-wheel-drive S4 sedan is a somewhat different breed, as you`d expect from a “spiritual successor.“

Built on basically the same platform as the 100CS, there`s a little less coddling or cuddling from the S4. The 2.2-liter, 227-h.p., 20-valve turbocharged 5-cylinder engine is meant for performance, though the turbo kicks in before you notice being nudged back into the bucket seat off the line.

The S4 comes only with a five-speed manual. Whereas European five-speeds often are a bit stiff and balky, the S4`s is exceptionally smooth. It`s an attempt to win anyone who might be considering a BMW, which along with Audi is one of the few automakers that still caters to those willing to pay roughly $40,000 for a car and shift for themselves.

It`s not difficult to distinguish the S4 considering the badges on the grille and deck lid and the flared fenders. What you don`t see, but learn to appreciate, is the sports suspension, complemented by 16-inch tires, speed- sensitive rack-and-pinion steering and power anti-lock brakes.

The major complaint we have with the car is excessive stiffness in the driver`s seat back. For some reason, automakers have a mind-set that anyone interested in performance prefers sitting on concrete.

Another item we didn`t like were the Nissan Maxima-like black numerals on white background gauges that turn to orange numerals on black background at night. The white looks unfinished. And the placement of the phone in the center armrest was annoying. The armrest/phone holder is so far back you have to fiddle around to reach it. Some motorists we`ve encountered on the road can`t dial a phone and chew gum at the same time. Making those same people hunt for the phone doesn`t help.

So you can enjoy your car for a long time, the sheet metal is two-sided galvanized and the body is sealed with polyvinyl chloride; the lower body cavities are filled with hot wax; and lower body panels are covered with stone/chip resistant coating.

I want to own my brand new car

July 3, 2020
By Kortney Jackson from Omaha Nebraska
Owns this car

August 22, 2017
By missyzygy from The GORGE
Owns this car

This is the best car I have ever Owned. Has more tales but has yet to fail. If you let it, It will tell. Dont misdoubt the auditrail

September 12, 2012
By GREEN from Washington, DC
Owns this car

All model years for the Audi 100 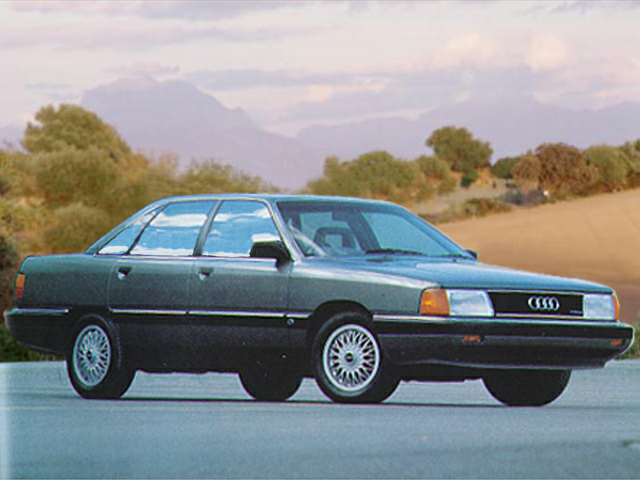