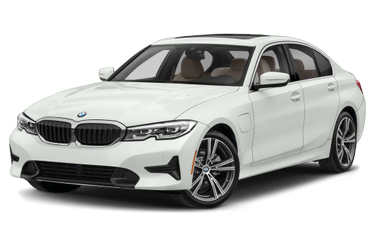 With the price of the gas going up and even with the possibility of a shortage in the future, I had to do something. But how do you substitute a 2011 Dodge Charger RT AWD? In another word, a car that has plenty of power, that glues to the road and that has a good amount of space. Well the BMW 330e XDrive comes pretty close in doing the magic. Power: With the battery boost and its AWD system, the car can take-off. It is slightly less than the Charger but it is definitively smoother. This 330e can really merge into traffic 0-55 just like that and it is smooth (no trip to the chiropractor after the deed...). Where I can feel a little less power is at higher speeds going up-hill. We talking about passing when you are already doing a good 70mph and you need to bring it to a good 110mph+. This BMW 330e does the job but I can notice a slight difference from the charger. Space: Well that BMW 330e trunk is magical. While the cubic foot number does not look good, the reality is way different. The trunk offers a lot of square footage, making is very usable. I am also very impressed on the seating space. I am 6ft and I can sit comfortably while driving and even in the back behind my wife. Once again, this BMW really surprises me. Gas Mileage: That is the very best part. I am not certain how epa / the government computes its number, but this car gets awesome gas mileage. Between Phoenix at altitude 1,086 and Pinetop altitude 7,206 AZ, I averaged 36.7 MPG. That is leaving Phoenix with an empty battery and climbing over 6,000fts... A round trip to Phoenix with a full battery and recharging in Phoenix, I averaged 57.9MPG. I mainly use the car to go to work, a 24 miles one way commute. Thanks to the battery / recharges, I get 350+MPG. Basically, I can be on the same 10.6 gallons tank for 4 months... And thanks to the car programing options, I recharge during off-peak tariff, thus I can barely see the difference in my electric bill. BMW says that the 330e xDrive battery will get you 20 miles. Honestly, if you are on flat surface and drive around 65-75mph, you will get a good 30 miles from that battery. I think what really helps it is the brakes that brings back energy in the battery. That systems is quite impressive. On trips between Phoenix and Pinetop, it can almost recharge the battery to 50% and between Pinetop and Phoenix it will do that twice. By the way, I am not a slow person. I keep in the car a radar detector (Uniden R7), that should give you an idea... BMW, well, you did it! The ultimate driving machine: speed, handling, space and fuel efficiency.

So far so good no problems, the 19 inch tires lose about a 1 psi a week. I getting about 75mph with charging. The only thing for me is the car is so low to the ground it’s difficult to enter and exit the car.

Rating breakdown (out of 5):
6 people out of 6 found this review helpful. Did you?
Show full review