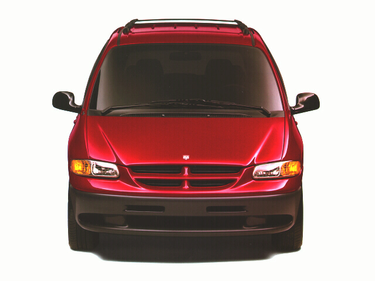 i love the 1996 dodge g c minivan now here is why not only have my wife and i owned 1 or 2 but 3 so far when you have a family of 8 this is the best and safeist way to go shopping and doctor visits is where it comes in handy never had an issue with a single one i never thought i would ever own a minivan but when we bought our 1st one my attitude towards the dodge g c minivan changed instantly i now say to pepole who look down on these and simply say '' drive before you lable '' these are the longist runing minivans on the roads and by far the safeist MINIVAN OWNERS UNITED :)

I will buy another

We bought our caravan used in 1999. We literally drove it until the wheels feel off...actually, the rear axle broke. Up until that point, we never had any real issues, other than tires, tuneups, oil changes...just your standard vehicle maintanece. I will be shopping for a new caravan.

Reliable but not pretty

This Dodge Caravan SE (base) has been easy to drive. The 3.3L engine is decent on gas even after many years. The spark plugs lasted until 100k and had to be replaced but it keep running ok. I would recommend switching to a blend oil or Mobil One after 100K. In later years the most annoying things were lack of CD in the stereo, weird on and off in the wipers in the front, the sound of the thing running, some rust, gas tank meter bouncing up and down and the lack of a center console to hold items while you drive. Parts are easy to find and not too pricy. Engine leaks a small bit of oil after 10+ years. And water pump drips once every three months, but have not created much drainage beyond a few drops of coolant. While driving the visibility is great. The van handles good in the snow with some fair tires, is high enough from the ground to not get stuck in the snow much. This van is a good bargain with the 3.3L engine for low cost family vehicle and moving stuff or work van.

March 9, 2009
By reliable lover of the vihicle and owner from brooklyn ny
Owns this car

You have to Own one to apreciate it ... with the mitsabitshi it makes the engine most reliable . good engine

January 18, 2009
By Van owner in Vermont from Burlington, Vt
Owns this car

This car is about average to a little better than average, in snow conditions it will fishtail. only had it about two months but its been pretty good for a 96.

October 17, 2006
By IFCAR from Fort Washington, MD
Owns this car

A minivan inherently offers inexpensive practicality, which this one did ten years ago. Execution has varied by model, but that always stays the same. For $16,000 new in 1996, this Caravan has lasted through ten years of a mix of commuting and carrying cargos. Of course, it has also eaten a transmission, two head gaskets, a computer, a water pump, and a catalytic convertor, and most probably other components that aren't coming immidiately to mind. But what still impresses me is the clear effort that went into this vehicle's design that seems to be absent from contemporary domestic minivans. The engineering, such as the sloppy handling, slow and noisy engine, and poor brakes, is obviously dated, but the interior details seem to me superior even to what is offered today. The dash has shape to it without sacrificing any usability, the two rear bench seats are designed to be rearranged or moved around, and there are little pockets and cubbies and adjustable cupholders and the like that seem much more like the Japanese vans of today than their American competitors. Above all, aside from its incessant trend towards unscheduled maintenance, I remain extremely impressed with what the Caravan has offered for the price over the years. If today's Ford Freestar, Chevrolet Uplander, and Dodge Caravan showed as much apparent interest in design as the Caravan did in 1996, two of those three wouldn't be contemplating eliminating minivans from their lineup and all three would not require monster rebates to compete. $16,000 bought general engineering adequacy, lots of space for passengers and/or cargo, and thoughtful details that can't cost much to include but make a vehicle easier to spend a decade with. What happened?