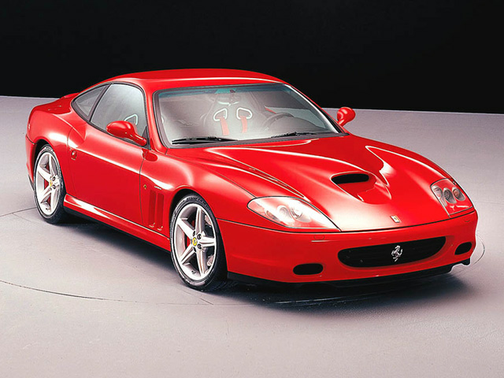 Our 2002 Ferrari 575 M trim comparison will help you decide.

Ferrari has called the 550 Maranello its interpretation of a 12-cylinder, front-engine berlinetta and described it as discrete, understated, but typical in design and looks. It sells for a little less than the four-passenger 456M GT/GTA but considerably more than the 360 Modena, which can be purchased for a mere $144,620.

Midway through the 2002 model year, Ferrari launched a new 575M Maranello coupe (the M designates a modified version), with an even stronger V-12 engine. Helped by a higher compression ratio and a larger displacement, the 5.75-liter V-12 power plant produces a whopping 515 hp. A new F1-type gearbox uses paddles at the steering column to change gears electrohydraulically. This is the first such installation on a V-12 road car. The 575M Maranello debuted at the Geneva Motor Show in Switzerland in early March.

In spring 2001, Ferrari launched a limited-production 550 Barchetta Pininfarina. Only 448 of these special cars were to be crafted at the companys facility in Maranello, Italy. Every last one was sold even before the cars unveiling at Detroits auto show in January 2001, with 131 of them destined for U.S. shores. Ferrari sold a total of 1,200 cars in the United States during 2001, according to Automotive News.

Exterior
Like all Ferraris, the 550 Maranello exhibits a classic sports car profile, centered around its long-hood/short-deck shape. An eggcrate-style grille sits low in front, and side gills are visible behind the front wheels. Similar design elements have been seen on various models from the Italian sports carmaker.

At 179 inches long overall, the 550 Maranello is 8 inches shorter than the 456M GT/GTA, and its wheelbase is only 98.4 inches long. The two-seater sits a little taller than the 456M, but at just above 50 inches high, its still not an easy car to enter or exit. Five-spoke alloy wheels hold 18-inch tires.

Ferrari says the new 575M Maranello has balanced and sober looks that will deliver the status of an instant classic. Front air intakes get a different shape and size, and there will be a new treatment for the front spoiler. A restyled headlight cluster uses the xenon high-intensity-discharge system for its low beams.

Interior
Both occupants of the 550 Maranello can luxuriate in wraparound seats that are upholstered in leather. Both the driver and passenger should be able to reach the climate and audio controls with ease because theyre mounted in the center of the dashboard. As expected, storage space is limited, but a cargo shelf behind the seats makes a useful supplement to the cars 6.5-cubic-foot trunk capacity.

Under the Hood
Mounted up front, the 550 Maranellos 5.5-liter V-12 engine develops 485 hp. The rear-wheel-drive 550 Maranello has been promoted by its manufacturer as one of the most powerful road-going GT cars Ferrari has ever produced. A six-speed-manual gearbox is the only available transmission.

The new 575M Maranello gets a 5.75-liter V-12 engine rated at 515 hp, along with a new six-speed transmission that can be controlled via levers at the back of the steering wheel. At the console, the driver can select either regular or Sport shifting, which affects suspension damping. The driver also can choose automatic or low-grip mode. Able to accelerate from zero to 62 mph in 4.2 seconds, the 575M Maranello can reach a claimed 202 mph.

All model years for the Ferrari 575 M 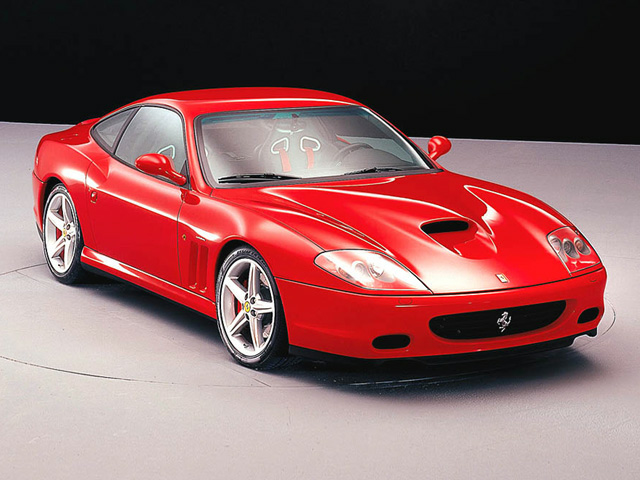