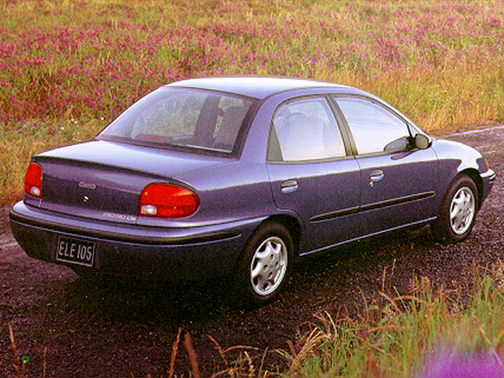 Our 1995 Geo Metro trim comparison will help you decide.

From the sublime to the ridiculous, step out of the BMW 540i into a Chevrolet Geo Metro two-door hatchback.

The new sedan (Cartalk, Sept. 18, 1994) is one of the nicer cars in the Chevy stable and one of the better buys in the economy-car market. Not only does it sport fresh styling similar to that of the larger Chevy Cavalier, but it also boasts roomy interior dimensions, comfortable ride and handling, excellent fuel economy and, perhaps most important, dual air bags. ABS is available, but as a costly $565 option.

The little 4-cylinder engine is one of the more fuel-efficient powerplants on the market. If you operate on a tight budget, you’d be hard-pressed to find a vehicle with as much value for the money as the Geo Metro sedan.

Which is a roundabout way of getting to the Geo Metro two-door hatchback. Under “ugly” in the dictionary, you’ll find this car’s picture.

It looks as if the designers went home one night, forgot to cover the clay model they were working on that day, the clay dried hard and, because they didn’t have time to start from scratch, they left it as is.

To be blunt, you wonder why Chevy keeps this car in the lineup. Coupes, even high-mileage ones, are not in big demand. And any vehicle that rides on mini 13-inch tires should come with handlebars and a chain guard, not a 1-liter, 55-h.p., 3-cylinder engine teamed with 5-speed manual.

Chevy boasts that each Metro “includes an intangible asset-peace of mind.”

We’d like the author of that statement to sit in the back seat as an 18-wheeler trying to make up lost time on the interstate approaches from the rear.

For that $1,100 you get a roomier, more comfortable, more powerful, more stylish vehicle, and some of that peace of mind that’s difficult to measure in window-sticker terms.

Has the mileage of a hybrid

It's amazing American Technology. Being able to get back & forth to work without going broke is remarkable. We should have demanded this earlier as Americans.

I am still driving it after 18 years!

Purchased in 1994, I have 258,000 miles on my Geo Metro 1.0 Liter with 5 speed trans. The options are 1. Air Conditioning, 2. Stereo. I have driven it from Tennessee to California, Florida, Mississippi and beyond. Handling is crisp and sporty; road feel is firm and smooth but can jolt you over a large bump. Performance is nominal and the engine must be throttled pretty well in order to extract power when needed but even at high RPM's the engine is happy and mileage is great at 40MPG when the A/C is on and I am climbing hills and 47.5 while climbing the same hills in winter with the A/C off at 70MPH. I boosted performance by utilizing E3 Diamond Fire spark plugs and by replacing half the 80W-90W transmission gear oil with synthetic automatic transmission fluid. The gearbox looses little power now that the engine doesn?t have to push power through all that honey-like oil. Comfort is surprisingly good with roomy interior (I am 6' tall) in the front and rear with controls well placed. The A/C can lag behind when the temp is near 100F and humidity is high. Reliability is very good with the "Bullet" never letting me down even in 10 inches of snow or packed ice, it keeps on going. The following is a list of maintenance I have performed (I am a Master Technician). Multiple timing belt, brake, drive belt and tire changes which are all normal maintenance. I have had the head liner re-lined as well as the seats re-covered. The water pump has been replaced once, the clutch was replaced once and the transmission has had a front bearing and 1st gear synchronizer installed. The exhaust has been changed twice from the catalytic converter back. The EGR system was cleaned out once (check engine light was on). Had the radio repaired twice. Replaced the multi-function switch (wiper/light switches etc) the switches were fine, I had trouble with a wiring harness connection and I replaced it all. Replaced the antenna (car wash accident). Over all, I am thrilled with the car and have decided to keep it! In the current high fuel cost environment, there should be millions of these cars on the roads. I am not sure why someone hasn't re-made the Geo which gets hybrid-like performance without all the price or high tech.

All model years for the Geo Metro 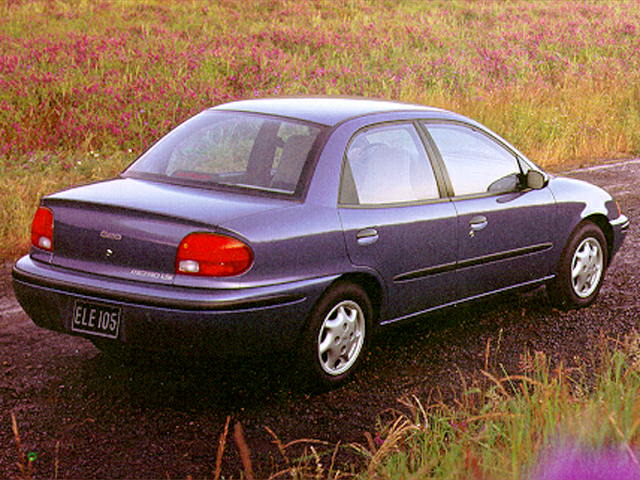