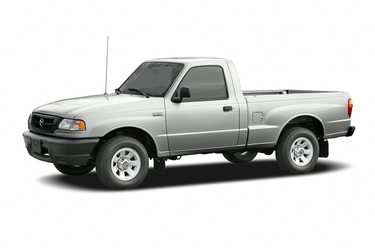 March 19, 2022
By SuperDave Schanen from Brooklet Georgia
Owns this car

I bought this truck new in 2004. It has served me very well, even though it is lightly used. It is reliable, comfortable, and a solid truck.

ive had this car for 6 months it runns great it has 64k m. ive done some mods. to it ive changed the rims and it looks sharp the radio in it is ok just fm and am but u can always replace it its will go pretty good when u start flooring it havent toped it out yet but im going to soon its nice

June 29, 2008
By Mileage Fanatic from Rochester, MN
Owns this car

I bought the 2004 Mazda B2300 (in 2006) because the previous vehicle I had was a B2300 and it held up extremely well. Since 2004 was the last year the 2.3 liter engine would be available with an extended cab, I felt I was getting an updated model of a vehicle I truly enjoyed driving. Its been disappointing. The miles per gallon is incredibly impressive. Its rated at 29 mpg on the highway and I'm getting over 32. However, since we lost our Mazda dealership and I have to drive almost 2 hours to got to another one, dealer inefficiencies are eating up more time than I have to donate. Its still under warranty and they do provide a loaner, but on at least 3 occasions, they haven't been able to fix it and it cause me to have to drive back to their shop to bring the loaner back, thus wasting lots of time. Let's see, the dealer messed up replacing the transmission fluid. I could tell the difference even be- fore I got it off the lot. The dealer said it was the way these transmissions are supposed to act. Due to work, I couldn't leave it at the time and had to return 2 weeks later for fluid changes, which eventually led to them replacing 2 or 3 synchors. Then, when the truck developed a lean to the left, the North American parts distributor sent the wrong rear leaf springs and I had to leave it over night again. Now, I have a grinding noise between 2nd and 3rd gear which the dealership can't seem to find, so even though its under warranty for another couple thousand miles, I'll have to leave it with them so they can figure out why its grinding. Then there's a "thumping noise" coming from under the vehicle which the dealership can't hear, and it will require leaving the vehicle up there and more driving for me in their loaner vehicle. I can't blame Mazda for the loss of time for me to get to and from their dealereship. Nor can I hold them responsible for normal wear and tear. I can, however, hold them responsible for providing the right parts, finding the problems and repairing them in a reasonable amount of time. Would I recommend anyone buy a 2004, B2300 (ext. cab) pickup? Probably not. It does get incredible mileage for a small pickup, but the irritation of North American Mazda sending the right parts or advising the dealership of the right parts to use, based on the VIN number has been enough to drive me to other brands.

My Third Mazda - And They Keep Getting Better!

February 3, 2008
By ngcomputing from Vernon, Florida
Owns this car

This is my third used mazda vehicle. My first was a used 87 323, that I drove to college and put well near 300K on it. My second was a 86 B2000, I put 224K on it and only replaced the tires, and the alternator and battery once. I just traded out and purchased the 2004 B2300, which was a service vehicle for a dealership with 64K and in mint condition inside and out. I've had the 2300 for a few days and just love it. When your inside, you feel like you have plenty of room (I'm 6'4) and actually feel like you are riding high in a bigger truck. The only thing I wish I had was an extended cab, so I could just slip a toolbox behind the seat instead of having to buy a toolbox. The 2300 gets excellent gas mileage, and by far beats out my 86 B2000. One thing I love about the mazda is that the motor always stays familiar, where as it is easy to do repairs if need be, plenty of room to work. I've had a ranger before and hated it, especially since I had to pull the motor out just to swap out and oil pan! Out all all the vehicles I have owned, I love the mazdas, low maintenance, rugged, easy to work on. If you can find a good deal on any Mazda, I would highly suggest that you really consider them especially over a ford. Remember though, if you buy a mazda car it will have FWD, meaning that every few years (especially if you hit the dirt roads) your going to have to replace those CV axles and keep it aligned --- with a truck with RWD, you don't have to worry about those issues. If you like a truck, and want something that is very dependable, then a mazda is for you!

I have a 2004 Mazda B2300 Regular Cab with 37,000 miles on it now. I never liked Ford, but I couldn't pass up on the price, and Mazda offers a better warranty than Ford for the same exact engine (4yr/50k miles). Mazda's exterior styling has Ford's beat, hands down. The truck has been EXTREMELY reliable giving me no problems whatsoever. The suspension is very stiff, but it's expected for a small pick-up truck. The gas milage is "fair" giving roughly 24mpg in city and 27mpg highway compared to other 4-cyl vehicles clearing over +30mpg in city driving. Still, getting 143hp from a 4-cyl is not bad at all. Driving is as smooth as butter until you hit some rough road. Handling is VERY sharp. This is a great little pick-up truck for light hauling and towing. It's reliable, good loking, yet very practical. It's a truck.

October 23, 2006
By sk8inpunknthrash from Tompkinsville, KY
Owns this car

This is my first vehicle. I love it. It looks absolutely great. The truck I own is a straight shift. It shifts great, you can bearly feel the shift. For a pickup, it is a very smooth ride. The stereo systerm is great. It is very clear. I haven't had the truck very long, but can already tell that is a great truck. If you are looking for a small pickup, this is definately the truck for you.

This Truck is very injoyable drive. It handles real well and is very quit in running. The Radio Sterio system is real good. So far thier are no major rattels. I bought in Feb05 and only have 15,000 miles on it. This is my main ride and not a work Truck though, I will use it when I need it to load and unload things. I still take care of it as if it was a Caddy. I chosed it for it's looks over all the small Truck.