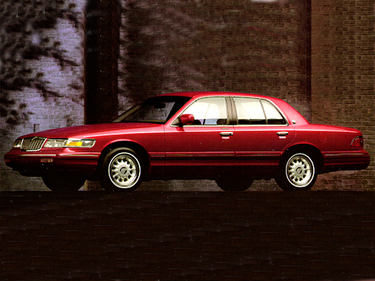 My First and Favorite Car.

When we purchased this vehicle in August 2013, I had been eyeing it for at least a month. From the vintage styling to the great condition, I knew I had to have it. They're a pretty cheap buy these days, and it's not hard to find one with low miles (ours had 116k). Very reliable, was like sailing down the road on a cloud, the most comfortable car I've owned. Also very roomy, seating 6 comfortably, with a ton of storage space in the trunk. You'll here some people talk about cars like this being "boats," as if that's a bad thing, but this car's size saved my life. In September 2015, I was driving two of my friends home one night and I struck one of two cows that were standing in the road. I was going about 50 mph at the time, and the car was totaled: The grill was destroyed, the front end was bent out of shape, the hood was mangled, the windshield was obliterated, and the roof was caved in. The cow actually came through the windshield and hit and bent the steering wheel. Had the front end of the car been any shorter, it would have come further into the cabin before getting caught on the roof, and I would have likely been seriously injured or quite possibly killed. Instead, I had minor cuts and bruises, and my friends were completely uninjured. Definitely a car I miss and one I am likely to purchase again in the future. (I ended up getting a '99 Town Car next, so basically the same thing,)

Value for the money

Reliable, comfortable, great gas milage. Performance and handling are supurb. This model auto is the greatest value for the money on the road.

Most Reliable car I've Ever Owned

The 1995 Mercury Grand Merquis Is A Great Car The 4.6 v-8 Makes Up For The Lack Of Feature, Handling Is Smooth Ride Is Comfortable Just Watch Out For That Fuel Pump Shut off Switch Itl Fool You.

February 28, 2007
By A Grand Marquis Enthusiast from Gentry, AR
Owns this car

I bought this car at 150,000 miles and have not had a problem yet. This is the best running car I've ever owned. It still gets 22-25 hwy mpg, the A/C blows extremely cold, and is quiet comfortable drive.

Great Car, 80K miles w/o problems except window reguators (3 failures out of 4 windows) smooth ride, needs CD player instead of cassette, very reliable, changed original Michlen tires our for Goodyears for better ride, Michlen tires crack from heat before they wear out, Goodyear has a softer rubber compound, mine rides better than my Dad's 2005

Rating breakdown (out of 5):
0 people out of 1 found this review helpful. Did you?
Show full review