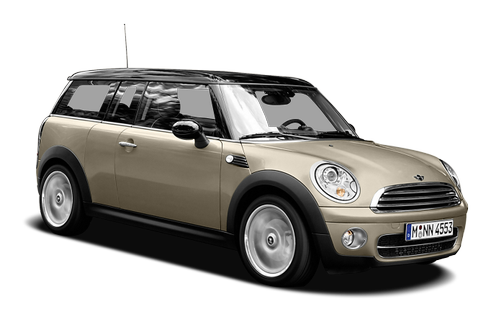 Our 2008 MINI Cooper Clubman trim comparison will help you decide.

The Mini got bigger, again.

It seems like an ongoing theme for the little car that could. BMW, the owner of hot-selling Mini, brought out the second-generation Cooper a few years ago, and it was slightly larger than the first. Then, it introduces the 2008 Clubman, and presto, lardo, bigger again.

Mini hasn’t transformed completely from phat to chunky yet, just as America didn’t become the pudgiest nation in world overnight; we did it bite by bite, a Quarter Pounder at a time. But the 2008 Clubman makes you want to check the car’s cholesterol.

Hopefully, Mini will stop growing and start performing again, because its current trajectory leaves it looking in its own rearview mirror a few years from now to wonder out loud: Do these double doors make my butt look fat?

No, of course not; you look great — that extra 9 inches of body only leaves you with more to love.

But truth be told, a couple of seams are starting to pop, and that beltline seems cinched a little too tight. Unless Mini wants to change its name to Husky, the Clubman is about as rotund as these little urban racers should get. Especially when some of the bigger competition such as the Audi A3 and Volvo C30 offer a more traditional approach to small but luxurious driving.

Of course, there are some perks to a super-sized Mini. The interior has a lot more space. Four adults can fit easily into this car. The third door — a small suicide door on the passenger’s side — makes ingress and egress to the back much easier.

Fold down the 60/40 split rear seats and there’s more than 32 cubic feet of space. This may give the Clubman a more practical edge than its smaller brother the Cooper. Keep the seats up and passengers in the back will enjoy 32.3 inches of legroom, compared with 29.9 inches on the regular Cooper. It may be only a few inches, but tell that to your shins.

Takes some getting used to

Overall, I like the Clubman’s interior: the giant speedometer in the center of the dash; the toggle switches; and even the quirky stereo switches that are confusing to use. But the materials, such as the plastic on the dash, feel cheap and when you put a cup of coffee in the cup holder, you cannot operate your window because the switch is covered by the cup. You’ll learn this right after going to a drive-thru.

Idiosyncrasies run throughout the vehicle — something I think appeals to many owners. The auxiliary jack is difficult to find. The seats are awkward to adjust, and every time I tried to turn the stereo up, I inadvertently changed radio stations.

Nonetheless, I looked past those problems when people commented to me about this cute little machine. There’s no denying this car’s personality: No one smiles at you when you’re in a Chevy Cobalt.

Following the Clubman’s tradition of the Morris Mini Traveller and Austin Mini Countryman of the ’60s, I decided to take this little big car on a road trip.

So I spurred all 118-horses under the hood — provided by the 1.6-lilter four-cylinder engine — and headed to western Pennsylvania. After all, road trips are an American tradition, and, in this particular case, a great way to put this car through the paces, check out the fall colors, eat fast food guilt free and have work pay for it.

The pickup was smooth as I clicked through the car’s six gears on the manual slushbox, but it seemed to lack the zip of previous Minis. I would have preferred the Clubman S with its more powerful turbocharged engine. Even so, it maintains its precise handling that comes with a car on 16-inch wheels and 100-inch wheelbase.

Around town, there’s still that go-kart feel to the Clubman, making it hootilicious to drive. The suspension is stiffer than a larger car, and you find yourself laughing through fast corners. Previous Minis have included heavy torque-steer, with the front-wheels pulling you to the side during heavy acceleration. The Clubman stayed straight all the time.

On the highway, the Clubman is noisy and fun. Its low ride and big windows provide an new perspective to semi tires.

Be forewarned: Drive-throughs are an awkward convenience from the driver’s seat. The McDonald’s attendant nearly dropped my Coke on me as she reached down to my lowly position, and I had to hop out of the car to get a few bucks from the ATM. Downsizing has its drawbacks.

Mini owners tend to take the good with the bad. Some may think it’s an inconvenience to have to get out of their car to use an ATM, Mini owners think it’s nice to stretch their legs.

All the way through Ohio, the ride was a little bumpy, but I was comfortable. Everything was at my fingertips and the stereo was able to compensate for the road noise. The Big Ben-odometer read 70 for most of the trip and it might have been able to push 80, but no one pushes the speed limit in Ohio too much.

Amazingly, when I neared Youngstown, the landscape turned into these rolling waves of green with growing patches of red, yellow and orange. I cracked the window, once I found the switch, to savor the crisp air and relish nature’s beauty. Nothing gold can stay, so a few pictures will suffice.

No time to gaze too long though. Semis surrounded me, as if I were the main character in a Tennyson poem. Pushed to the left lane, I began to feel the squeeze of the big rigs and the concrete barrier on these mountain highways. Luckily, there was room to spare in my lane, even when a truck would shave the line into my lane.

Going up hills, however, I found myself downshifting to fourth gear in order to keep up with traffic. More power would have been very handy at those times.

One impressive stat I came across was the 36 mpg my Clubman reached in the real world.

If you’re considering this car, I’d suggest getting a manual transmission. It lets you compensate for the lack of power with downshifting.

However, I should caution consumers, the Mini Clubman is not for everyone. If you want a smooth, quiet highway ride, this is not for you. If you want loads of power at the press of the pedal, there are better alternatives. If you want to blend into the background, there are much easier ways to do it.

This car makes a statement, and the extra room makes the Clubman, well, bigger. And bigger is not as becoming as Mini may have thought in the first place.

Exterior : Excellent. True to the Mini character, the big headlights and curvy sides make this grin with energy. The double doors in the back and third door on the passenger’s side make it even quirkier.

Interior: Good. Toggle switches and big speedometer give the Mini a unique look. Materials feel cheap. The car was comfortable on a long haul.

Performance : Good. Very fun around town but lacked enough power on the highway, especially when driving next to big semis.

Cons: Tight space in the back for someone who carries more than two adults. Harsh ride may not appeal to those who want a highway cruiser.

It's the latest car among my choice of brands.

February 1, 2019
By AthenaJ from New Jersey
Test drove this car

I just want this car for myself. I am looking to purchase one but don't want to recommend my choice to anyone else. Let them find their own brand. Don't really fancy others having what I own.

The more I drive it, the more I love this car! OK, I've only had this it for ten days, so I have not experienced this car in all conditions yet; but so far, I have been very impressed by its performance. I can drive this car much harder than the previous vehicles I've had, and it'll take even more. And it appears to be getting great gas mileage - much better than the two vehicle I have driven in the previous 14 years. The styling is very cool, and it's pretty comfortable. I'm six foot tall, and I have long legs, and there is plenty of room for me inside. It's a little tight getting in and out, but that's all. Otherwise, not a problem. It is pretty versatile. I can fold down the rear seats if I need more room to carry stuff, or I can bring three people along with me to where I'm going. I wouldn't want to go across country with three other people in this car, but for a short trip in town, no problem. If I had to fault this vehicle for anything, I think the controls are a little over complicated, like how to set the radio stations and like that. It's hard to figure out, and the owner's manual is no help. But! I have called the MINI dealer and great response from the parts department about getting some things that I need. And people notice this car and ask me about it all the time - even while pumping gas and like that. It's a cool, fun car to drive. Enjoy the ride!

January 16, 2012
By Helgas Driver from Jackson, MI
Owns this car

If you are looking for a car that is super responsive, great on gas and a real head-turner, then you need a MINI Cooper! For a small car, the interior feels spacious, well laid-out and thoughtful in design. The only drawback is that it is not great in the snow or ice as it is not very heavy. Other than that, it is a fun car to own.

All model years for the MINI Cooper Clubman 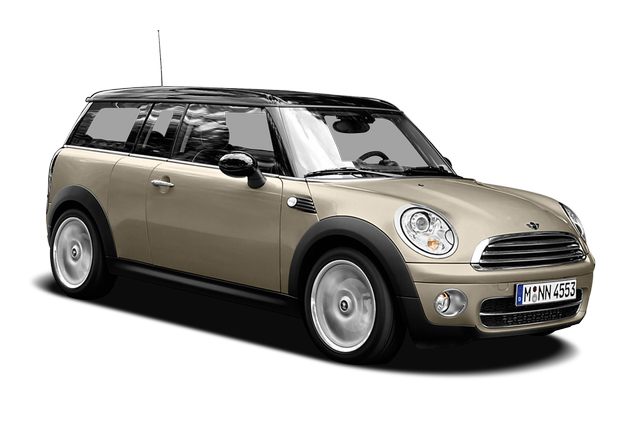 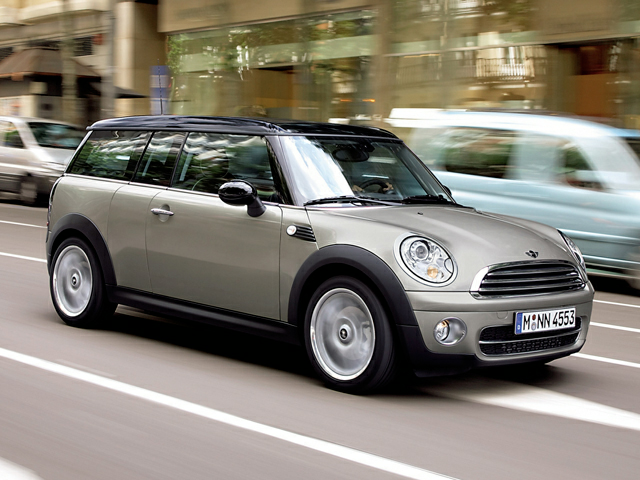 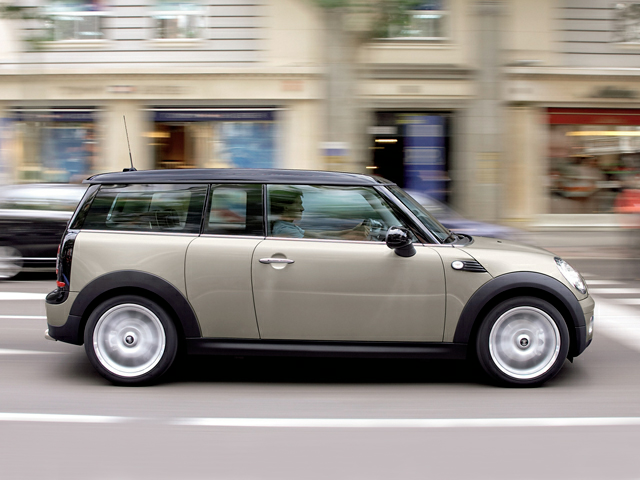 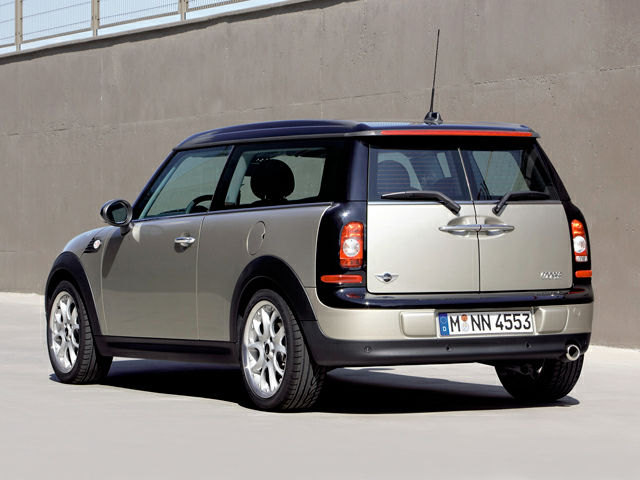 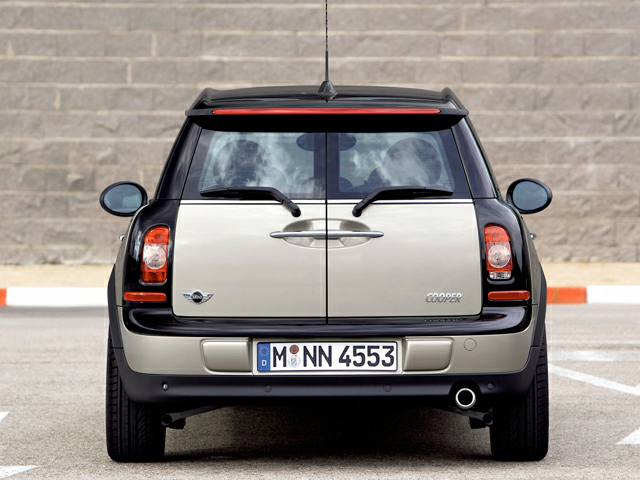 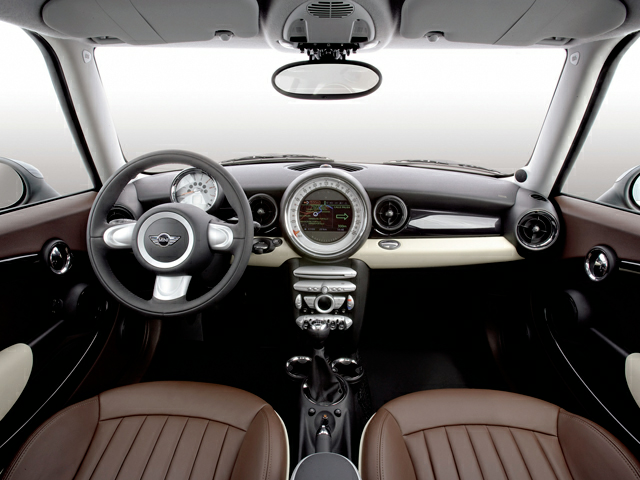 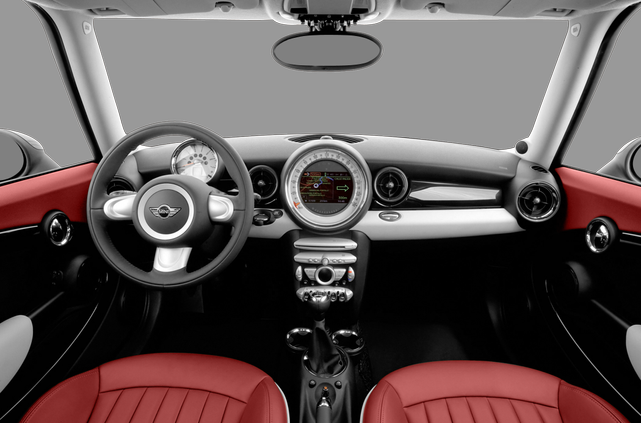 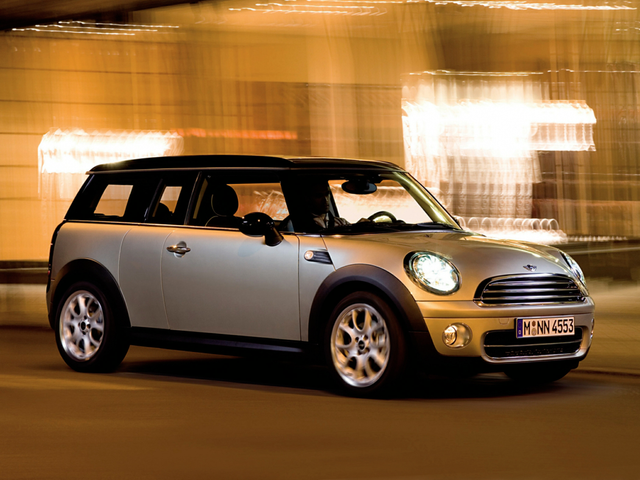 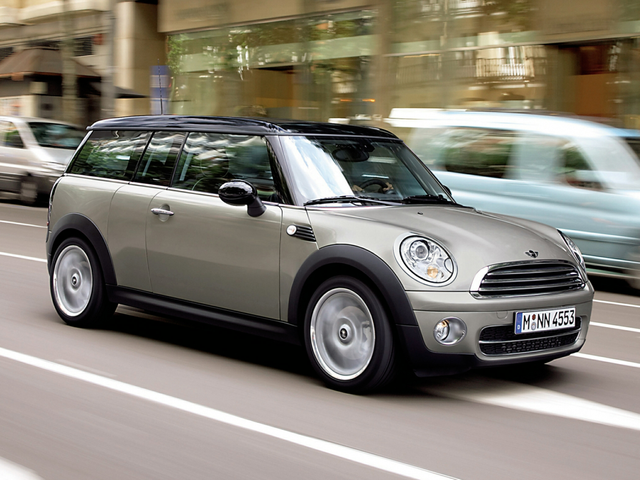 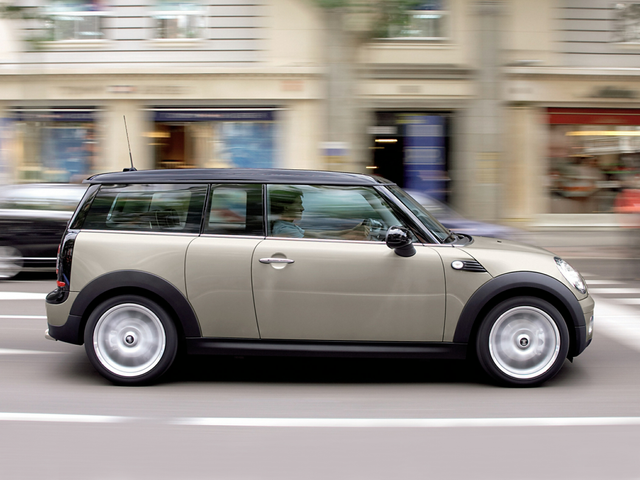 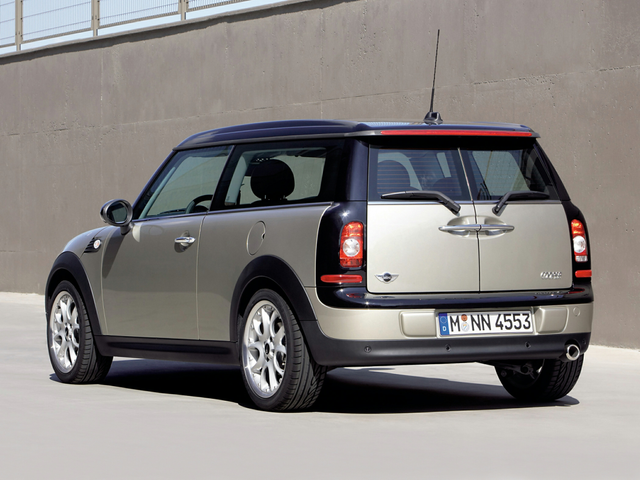 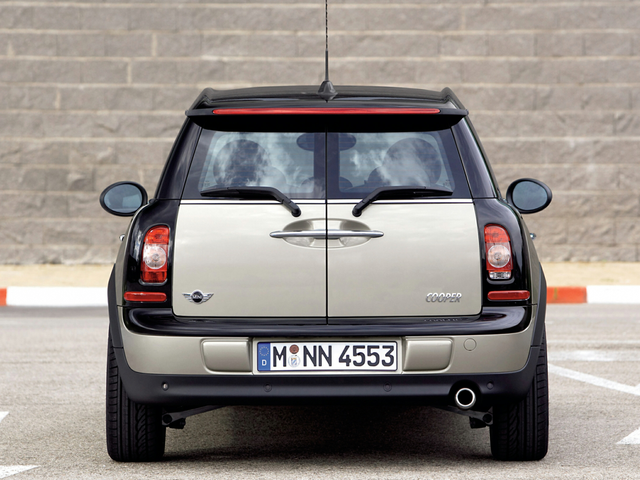 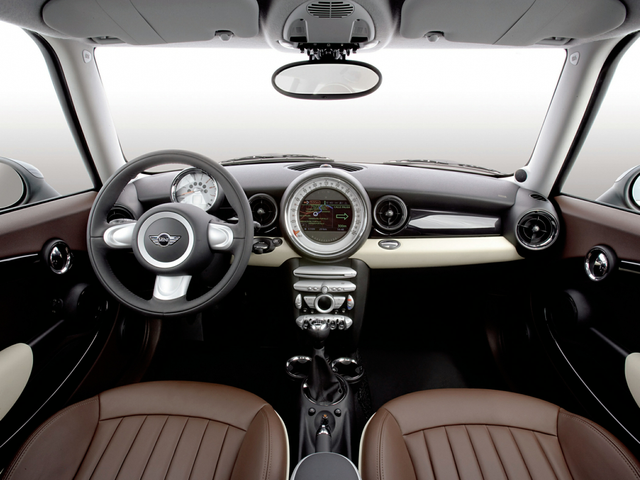