Our 1994 Oldsmobile Ninety-Eight trim comparison will help you decide.

Also, there are engineering “refinements” — a few modestimprovements in the Ninety Eight Regency’s operational systems. Well,maybe not so modest. There’s an air bag for the front-seat passenger inthe 1994 car. It’s a change most folks can live with. There’s a newair-conditioner refrigerant — R134a. It replaces cooling juice composedof ozone-damaging chlorofluorocarbons.

Finally, there are “significant” interior changes. Heads up. Whenevera manufacturer uses “significant,” that means something big is in theworks — like the new Ninety Eight Regency’s passenger cabin. There isno similarity between it and the indisputably ugly thing it replaces.

The 1994 car’s cabin is beautiful. Yeah, “beautiful” — a word seldomapplied to an Oldsmobile product in the past two decades. But it surelyapplies here.

The new Ninety Eight Regency’s cabin is also elegant, ergonomicallycorrect, intelligent. The main instrument cluster is housed beneath aneatly sculpted hood. The gauges are simple and easy to read. Thedashboard flows from the center, moving east and west before merginginto the front-door panels, which also have been redesigned.

Background: Geez, I’m 45, and the Oldsmobile Ninety Eight has beenaround longer than I’ve been alive. The car was introduced in 1941, notsignificantly changed until 1971, refined in 1977, significantlyreengineered in 1985 when it became front-wheel drive, and refined againin 1991.

Throughout all of that tinkering and remaking, the Ninety Eightremained a full-size cruiser, capable of carrying six adults and all oftheir stuff. It’s been a favorite of folks over 50, and of people whohabitually drive long distances, and of ministers whose congregationsmight frown upon them running around in something as deliberatelywealthy as a Cadillac or Mercedes-Benz.

There are only two Ninety Eights for 1994, the tested Regency and theplush Regency Elite. The Olds Ninety Eight Touring sedan, an errantattempt to snare younger buyers with an odd mix of horsepower andGeritol styling, has been discontinued for the new model year.

Complaint: The car is so doggone big — 17 f eet long, more than sixfeet wide — and it weighs 3,509 pounds, with most of that heft (63.2percent) over the front wheels. It’s just so much to handle.

Praise: All of that bigness, troublesome in tight urban traffic,becomes an asset on the highway, especially on long trips. The NinetyEight just cruises along. Quality? It’s there. No shakes, rattles orother trifling traits.

Mileage: Surprise, surprise. Big as it is, with all of its electronicengine controls and other enhancements, the tested Ninety Eight Regencygets about 25 miles per gallon (18-gallon tank, estimated range of 436miles on usable volume of regular unleaded), running mostly highway withfour occupants nd light cargo.

Purse-strings note: It’s a lot of car for the money. But, um, do youneed that much car?

March 11, 2017
By Oldsmobile from Roland, Iowa
Owns this car

Nice car and they really ride nice down the road and they are a very luxurious vehicle and I love the 1991-1996 oldsmobile ninety-eight regency elite 4-door sedan a lot too as well.

All model years for the Oldsmobile Ninety-Eight 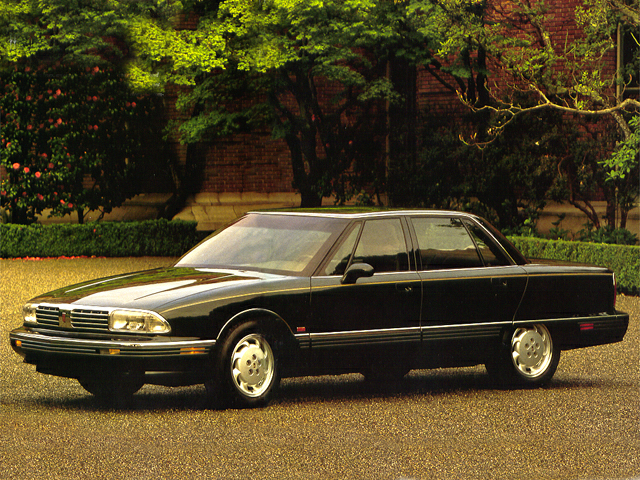