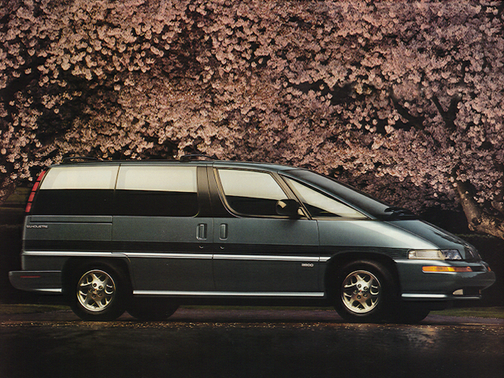 Our 1994 Oldsmobile Silhouette trim comparison will help you decide.

For the 1994 model year, the Oldsmobile Silhouette was the only member of the General Motors mini-van triplets not to get a nose job.

The Chevrolet Lumina and Pontiac Trans Sport had their honkers bobbed for the new model year because when snow fell on the front end of the GM mini-vans, skiers would confuse them for the slalom.

But Olds said it could use the money elsewhere-like investing in the new Aurora sedan that comes out in May.

So you’ll have to put up with the ski slope a couple more years, until GM replaces all its plastic-body front-wheel-drive mini-vans in the 1996 model year with generation deux.

We’ve grown to tolerate the protruding proboscis since the wife pointed outthat while we thought it made the van’s styling rather ungainly, she considered it a safety factor to have so much bulk between her and any object she might strike.

The long nose outside means a long dash leading up to it on the inside. Theproblem in the past wasn’t just the enormity of the dash, but the fact that itreflected in the windshield. For 1994 all the mini-vans sport a carpet-like covering over the front portion of the dash to reduce glare. Nice touch.

The Silhouette’s 3.8-liter, V-6 engine is peppy, its standard anti-lock brakes comforting. The driver-side air bag is a welcome addition. You’ll have to wait till 1996 for dual bags.

Still, we admire the mini-van for one new feature in 1994: a power side sliding door.

You can open and close the door automatically by pushing a button on the key fob or in the roof console. The door motors open and close. No more havinglittle Muffy or Buffy stand outside in the snow or rain trying to muster all their energy to perform the simple task of trying to shut a van door. If the van is parked on a hill, Muffy and Buffy and Mom and Dad combined can’t close the door.

The power sliding door ensures that it’s closed securely first try every time. And it’s a mere $295 option. Don’t consider the $295 an extra cost as really a $295 saving rather than have to send Muffy or Buffy to the analyst tolearn to cope with their inability to close a door.

The most frequently asked question of the door is, “What happens when my kid is halfway in and the door starts to close on him?”

Unfort . . . oops. Fortunately the door senses an obstruction, stops in itstracks and motors back again to spare your child.

The second most frequently asked question is, “What happens when I’m busy driving and my kid grabs the door handle? Will it open on its own?”

Nope. Mom and Dad need only reach up and press the button in the overhead console and the door can’t be fooled with by rear-seat occupants.

The one question never asked is, “What happens when Dad forgets to close the door after he puts his briefcase in back and then gets into the driver’s seat and tries to drive away?” Purely theoretical question, of course.

What we found-make that h eard-is that once you put the gear selector in “D”or “R” with the door open, you get such a blaring warning sound from the door,you’d think there was an air raid in progress. The noise is so irritating there’s no way to drive until you push the button and close the door.

If you don’t have a Muffy or Buffy but do go grocery shopping and haul lotsof sacks, or golfing and carry a few bags, or vacationing and need to load lots of luggage, the power sliding door sure comes in handy.

Used this car while my Ford flex was broken

I loved this car I bought a used Ford Flex last year and this year ran in to some major issues so my exes family lent me their 94 silhouette while my flex got worked on by them I’m on day four of driving the old van and it’s amazing I love it more than the newer flex! It’s also better on gas! Rides smooth and is just really practical

As an owner, definately got my money's worth. Handles great in ALL weather conditions. Wish I could by a new one.

Great vehicle. Bought it used with 145,000 miles. now have 235,000 with no rust. Engine runs great. Has been a great vehicle to haul family around, along with other items. heating fan has been replaced a couple of times, along with transmission at 140,000 miles, just before I got it. No other major issues. Gas mileage is great 24-27 miles per gallon. 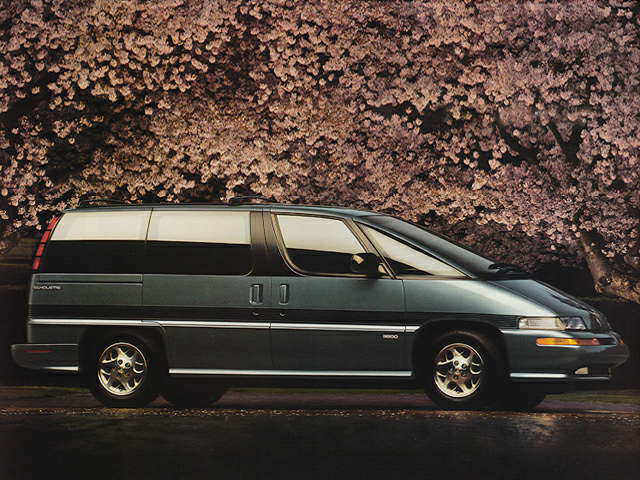