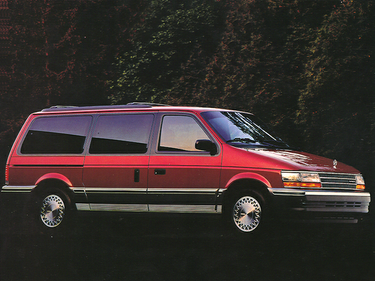 July 1, 2010
By Voyageroffroader
Owns this car

I had this car handed down to me from my parents a couple years ago, but we've had it in the family since it was new. Overall, its been an excellent car. We've used it for cross country trips, camping, daily driving, skiing (its the AWD model), hauling kids, and other normal minivan duties. While I've had it, I've used it to move a lot of my stuff to and from college. I've even been able to haul a sportbike inside it. The chairs can be easily removed to create a lot of space inside. The 3.0 V6 engine is bullet proof and surprisingly powerful. I drive this thing hard, and found it to be well handling for a minivan. I've even taken it off road in Sand Dunes, and the all wheel drive grips very well, (caution, it doesn't work in reverse). The ride is nice, and interior is comfortable. Very easy to drive for hours and hours. (aka Portland to San Fran). Gas mileage is about 18 mpg average. The only problems we've had is with transmissions, which we've gone through 3 or 4 through the life of the car, but it has over 190k now and I haven't had any tranny problems since I've had it. And like i've said before, the motor is solid as a rock. These vans are old now, but I see them as the modern day VW bus, better running but just as versitile and inexpensive.