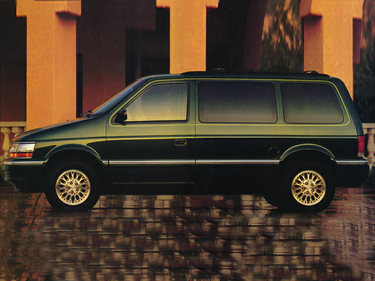 This car was great for cross country trips and was a very comfortable camping vehicle. It has been a very reliable and dependable vehicle. We're sad to see it go but just don't have the room for it anymore.

This van has been a dream, Reliable, powerful, well designed for the most part. A friend inherited this from his grandpa in 2013, and did not want it, so he gave it to me! With only 92,000 miles at that time, it was in excellent shape,,and still is...I’ve driven it for 6 years now, and am up to only 126,000, but am hoping to reach 300,000!!! I have only ever put tires, brakepads, oil, sparkplugs, filters, and other fluids in it, no real major problems except a fuel pump after 3 years, and a new PCM (computer) which were fairly easy to do. Mine is the 3.0l V6 SE, which is quite powerful for an automatic. It’s mileage is only ok I suppose, but it excels on the highway, running on fumes...This engine DOES have one flaw however which I think is common to them: The valve guides or seats (not sure which or both (my BETTER mechanic explained sone time ago). Deteriorate, and then allow more oil to burn through the engine, but it really doesn’t use that much...but she does smoke from it on occasion (Since this is at least 1000$ to fix, to me it’s not worth it. Mine also has always had a “sometimes” leaky transmission, but I just stay on it and use good treatments as well. I think this could likely be fixed easier than I once thought, but I’ve just never got around to it. It’s great for passengers, camping, moving (roof rack!) or just about anything! PRACTICAL! And CHEAP to own and run!!!

my first car n the best!

I had this van for 5 years while in high school and college. It was my grandmas and that van took a beating. I'll tell you want it stood high though. I always felt safe and always I will love my baby. I had to get another car cause of gas that's the only problem with this van. High way my van loved doing 80 and did awesome. This is my baby.

i would not own any other vehicle but a plymouth voyager, dodge caravan, or a grand cherokee jeep, i have yet to buy a town and country, although my brother has one, and he really loves it. They are the best!