Our 1992 Pontiac Bonneville trim comparison will help you decide.

Pontiac’s Bonneville SSEi has the potential to become a classic.

Its performance and styling separate it from the ranks of the ordinary.

The SSEi is one of a handful of cars to leave the factory with a supercharger, a performance-improving device that extracts more power from the engine.

The Jaguar like styling gives the Bonneville elegant lines and a shape that probably will not be affected much by design trends. But then there is the issue of price.

Some car buyers might look at the price tag of about $30,000 and scoff. Could anything American-made that is not a Lincoln or a Cadillac be worth so high a price?

To be fair, you really can’t assess the SSEi that way.

You have to compare the SSEi to similar cars to get a fix on whether the Pontiac offers enough value to justify the price. I think it does.

If you are in the market for a high-performance sports sedan, you obviously are going to take a close look at the leading cars in the class. You will discover that the Pontiac is bigger, more powerful and less expensive than most comparable imports, such as the BMW 525i, the Acura Legend and the Mitsubishi Diamante. And its only real American competition is the Ford Taurus SHO.

The SSEi is unlike any other car I have driven recently. As soon as you turn the key, you hear a barely muffled roar from the exhaust. You are immediately aware that your right foot controls an engine with the pent-up energy of a caged lion.

Stepping hard on the accelerator, however, does not cause the tires to squeal. You don’t feel neck-snapping acceleration or anything like it – and that’s where the Bonneville SSEi fools you.

When you look down at the speedometer, you suddenly realize you are traveling fast enough to be not just ticketed, but probably jailed; in other words, power is delivered with ultimate finesse and refinement.

The SSEi comes with a 3.8-liter, V-6 that develops 205 horsepower, upfrom the 170 horsepower available in standard Bonnevilles. The supercharger enables the engine to develop more power at lower speeds.

Pontiac claims the SSEi can go from 0 to 60 mph in 8.7 seconds, though several magazines came up with different figures. Car And Driver tested a Bonneville in this month’s issue and reported a 0-to-60-mph time of 7.5 seconds. However, in a similar test, Road & Track in November came up with a 0-to-60-mphtime of 9.0 seconds.

In any case, that’s impressive performance for a six-cylinder car that weighs nearly 3,700 pounds. Many V-8-powered sedans that weigh less can’t outrun the SSEi. It is EPA-rated at 16 miles per gallon city, and 25 on the highway.

You have no choice of transmissions in the SSEi. It comes one way: with GM’s ultra-smooth shifting computer-controlled four-speed automatic.

The SSEi is clearly the best-handling sedan Pontiac has ever built.

The SSEi will carve up curves, stop, turn and erase bumps from the pavement with as much vigor as most imports.

The suspension is independent front and rear. The SSEi is not as stiff-riding as many other sports sedans, yet it is not bouncy over big bumps. It delivers a smooth, comfortable ride when driven normally. But the car is most rewarding when pushed hard.

A traction control system built into the drivetrain ensures that the front tires maintain maximum grip under full acceleration, regardless of the road condition.

The four-wheel disc brakes are equipped with the latest anti-lock system. They work well but could be given a little more stopping power.

The SSEi is equipped with an electronic variable-effort steering system, which may take a little extra muscle to operate in cold weather. I ested the SSEi in 30-degree temperatures in Detroit, where slow sharp turns in parking lots required a Hulk Hogan-like determination to execute.

The SSEi is every bit as interesting on the inside as on the outside.

For instance, the dash appears to have taken some of its cues from a jet fighter’s cockpit. The instrument lights are red, and the analog gauges are large, round and easy to read.

The SSEi features what Pontiac calls the HUD, or Heads Up Display. This device projects the vehicle’s speed onto the lower left portion of the windshield directly in front of the driver. The small numbers can be adjusted for brightness or turned off. HUD allows drivers to monitor their speed without taking their eyes off the road.

Only one option was installed on the test car: $779 leather bucket seats. The comfortable and supportive seats are the best in any GM car, excluding the $60,000 Cadillac Allante.

The interior does have a flaw, however: the confusing array of console-mounted buttons that control the electrically adjustable seats. There are nine buttons – arranged in three rows. There must be a simpler way. Looking at row upon row of seat adjustments is confusing.

Other controls, for the windshield wipers, cruise control and headlights, are standard-issue GM components that work well and are easy to use.

Visibility is good, front and rear, although the rear headrests do protrude slightly into the line of sight.

Five passengers and a load of cargo fit into the SSEi. The trunk has a net on the outer edge that holds small parcels in place, a nice touch.

Limited production, along with high performance and powerful styling, are some of the ingredients of a classic. For 1992, Pontiac is on track to build about 107,000 Bonnevilles, according to general manager John Middlebrook. The SSEi will account for about 8,700 of those.

May 7, 2008
By Bonneville Lover from Broadway,VA
Owns this car

This vehicle has some of the best interior I've ever seen. I have almost fell asleep driving before its so comfortable. It doesn't have much power. Trying to do a burnout in a 1992 Bonneville is impossible.

A good car overall. Good performance and handling, but had troubles with reliability. Transmission and radiator problems in the later years of owning the car. A very comfortable ride though, seats were nice and plush and the features on the interior were great. Sound system was especially good, 10 speaker stock stereo system is very hard to beat even in this day and time. Also had a great deal of horsepower and acceleration to it, very good in the performance field. Also with the ABS system installed worked very well in the winter in almost any conditions that didn't require 4X4 and sometimes would even make it in conditions that would require 4X4. Overall a good and safe car. 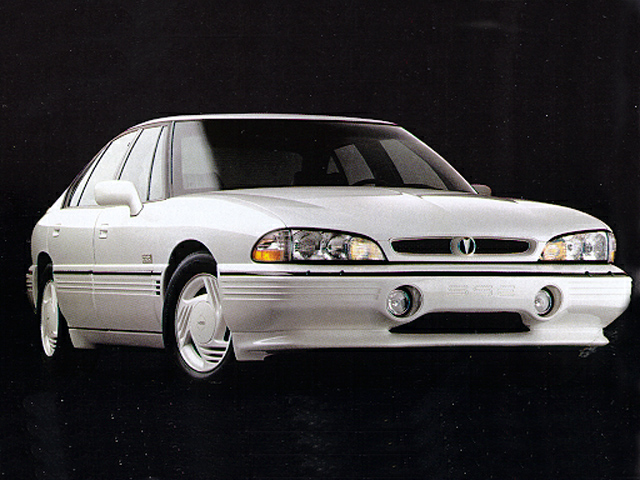