Our 1993 Pontiac Bonneville trim comparison will help you decide.

If you find the Bonneville SSEi to your liking, but not its $29,000-plusprice tag, Pontiac has come up with a compromise for the 1993 model year-theBonneville SLE, or sports luxury edition.

It`s one of those best-of-all-worlds machines, bringing you just aboutthe same looks, ride, handling and performance as the top-of-the-line SSEi at a price the average Jane and Joe can afford-at least a price that`s about$6,000 less than the SSEi.

And not only do you save $6,000, but you get a lettering designation-SLE- that rolls off the lips, rather than one-SSEi-that skitters over the tongueand the roof of the mouth before banging into the back of your teeth.

Our initial impression was bravo and hallelujah for Pontiac thinkingabout affordability and the fact that not everyone who wants a sporty car has won the lottery.

When you stop to think about it, however, the SLE wouldn`t be necessaryif Pontiac didn`t price the SSEi in roughly the same stratosphere as the tradedeficit.

As we said, the SLE is a compromise. Pontiac took an SE and loaded itwith performance and luxury options to make it an SSEi pretender. It also got its own grille to keep it from being called a clone.

The 3.8 is not only lively but also carries a 19-mile-per-gallon city/28- m.p.g. highway fuel economy rating with its standard 4-speed automatictransmission. Very good for a five-passenger family machine. Unless you climb lots of steep hills or pass lots of long convoys, the 3.8 does just finewithout the supercharge boost.

What we found most enjoyable about the 1993 SLE we tested, however, wasperformance as measured by how the car responded when 5 to 6 inches of snowcovered the drive and salt-induced springs of water filled the highways.

Often the performance car has to be left in the garage when the snowplows take to the streets. But the SLE proved to be one of the most stable carswe`ve driven on saturated pavement. That sense of security adds to the drivingenjoyment.

While cars around us treaded gingerly, the SLE performed at the speedlimit-perhaps a mile or two above it. Tires gripped the road and thesuspension system held the radials in place.

Having anti-lock brakes meant that we could approach intersectionsknowing the car would stop in a straight line. The SLE also had tractioncontrol to ensure we would move away from the light without slipping orsliding or leaving our lane. And an air bag rested in the steering wheel hubjust in case. But there`s no passenger-side bag, like in the SSEi.

Pontiac is recognized as GM`s performance division, which gives theimpression performance is measured only by 0- to 60-mile-per-houracceleratio ns and the body sitting flat in sharp turns, not 60 to 0 braking orthe car holding steady and within the white stripes when snow, ice or raininhibit travel.

The SLE brought peace of mind driving in the Snow Belt. The SLE is analternative to a utility vehicle. Its ability to scoot from the light in theSun Belt is an added bonus.

The SLE acted like the original Bonneville SSE, the car that popularizedthe term “sports sedan“ and taught a generation brought up on two-doorcoupes that four-doors can be fun, too.

The SSE was one of our all-time favorite cars before Pontiac fooled withBonneville styling in 1992 and adopted a rear-end de sign that looks as if thesheet metal was squeezed so it would fit into a packing crate. The beauty ofany Bonneville starts in the cabin and under the skin and stops at any outsideportion.

Only two gripes with the car: one is the door lock button, which isconfusing as to which end you push to lock or unlock the door, and the otheris the diameter of the cupholder, which is suitable for a McDonald`s cup butnot a 16-ounce pop bottle.

The 'Bad Bonne as we call it is truly a time capsule of 90's grandeur. It moves you down the road in complete comfort, taking every road imperfection in stride. This car is honestly smoother driving than some 2017 BMW's I've driven. Once compared to the Lexus of its day, it was the economical & reliable option that most people went with. Its been an extremely easy and low maintenance car to own!

January 14, 2015
By Bonneville Owner from Kansas City
Owns this car

I got my 1993 Bonneville a year and a half ago from owners who had kept it pristine for twenty years. It has all sorts of extra options on it despite being a base model SE, including a power sunroof, leather, twilight sentinel, and the upgraded suspension that normally went on the supercharged Bonnevilles. As a result, this car does not feel or act its age, being far more comfortable and offering similar amenities compared to cars half or even a quarter its age. Driving this car is a breeze, especially on the highway where you can sit in those leather seats for hours and and still be comfortable. It also gets good highway mileage for a full-size car (27-29 mpg is my average). City mileage is unimpressive, though (15-17 mpg for me). As for power, the Bonneville has plenty of torque to get the big car moving. Its 225 lb ft. is enough to match many brand new cars of similar weight today. While the Bonneville is short on horsepower (only 170), it has enough torque and grunt to move around well enough. The interior and the trunk are ridiculously spacious. My only gripe on the inside is that the cupholders are practically useless for holding actual drinks. That probably says more about our culture than this car, though. Cups were smaller 22 years ago. The exterior is flawless, with the dark green paint and alloy wheels having aged very well. Its aggressive but smooth styling still looks good after all these years. As for reliability, this Bonneville has been about as solid as you can expect from a 22 year-old vehicle. It has needed a new fuel pump since I've owned it as well as a new transmission line, but that's it other than routine maintenance. The power antenna stopped working, too, but the radio reception seems unaffected. A couple plastic bits on the inside have fallen off, too, but that is again typical for its age and can be fixed with basic household supplies. As this Pontiac only has 94,000 miles on it, hopefully it still has lots of road ahead of it. I plan to fix up all the minor things in the spring and keep it looking as spotless as possible. I absolutely love driving this car. I plan to keep it as long as I can, so maybe you'll see it at a car show in another 22 years. Who knows?

I've had my '93 Bonneville for 3 years. I could have not have asked for a better first car. The car sat in a garage for a year before I got it, and it started right up, and has started right up every day since. It now has 311,000 miles on it and it still runs just as good as the day I got it. I've been in a few fender benders, bumped into a few cart racks at the store and hit my fair share of pot holes, but the Bonneville took it all. It still has the original transmission and engine. Overall, a really solid car. 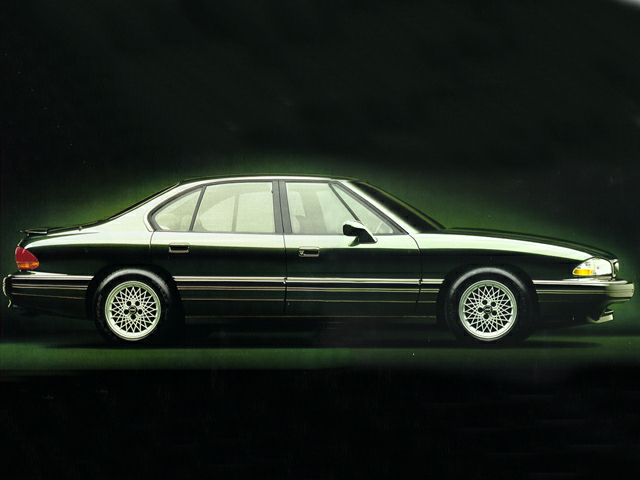