Our 2004 Suzuki Aerio trim comparison will help you decide.

The Little Engine That Can
2004 Suzuki Aerio LX

Let us consider the urban runner.

It has four wheels instead of two feet. It consumes gasoline instead of carbohydrates. It emits carbon monoxide — which, unlike the carbon dioxide exhaled by humans, isn’t good for green plants or other organic life.

But with proper pollution controls, the motorized urban runner can be good, practical and even fun. It is small, efficient, a blessing in city traffic and parking garages; and it is growing in safety, numbers and engineering sophistication.

You can be forgiven for not knowing that. The American preoccupation with sport-utility vehicles, pro and con, has consigned the urban runner to obscurity, with the exceptions of breakthrough models such as the Mini Cooper hatchback and the 2004 Toyota Prius sedan.

So, I’ve decided to explore this world of tiny wheels and small but robust engines — of minuscule bodies with big hearts and inventive interiors capable of seating at least four adults in reasonable comfort.

I’m involved in a long-term study of Mercedes-Benz’s Smart car, currently being redeveloped in Europe for global sales and scheduled for U.S.-market introduction in 2006.

I will dispense with the visually obvious: The Aerio LX sedan is ugly — a car with a bulldog face, square butt and supercilious rear wing.

Yet, what it lacks in face it has in performance and grace — which are matters of dispute among automotive scribes.

The editors at Edmunds.com, for example, describe the Aerio LX’s handling as “sloppy.” I strongly disagree. The Edmunds.com people must have tested the car on a racetrack, where it does not belong, instead of on congested urban streets, where it excels.

I thoroughly enjoyed driving the Aerio LX through the traffic jams of Baltimore and the District of Columbia, through the mayhem of suburban Christmas shopping traffic. In those environments, the test car, equipped with a four-wheel independent suspension system, handled beautifully. It moved in the manner of a sharpened pencil, executing crisp, quick strokes through stacked traffic and deftly avoiding seriously inattentive motorists.

I was so impressed, I returned to the Aerio LX daily, leaving other substantially more expensive and prestigious vehicles in my driveway.

Zip and chutzpah are key characteristics of good urban runners, and the Aerio LX sedan has lots of both. Its 2.3-liter, 155-horsepower, four-cylinder eng ine out-muscles the comparable Honda Civic DX sedan (115 hp), the Toyota Corolla CE (130 hp) and the base 2004 Toyota Matrix car/wagon (130 hp). For that matter, the Aerio LX also packs more punch than my very own, much-beloved, base Mini Cooper, which comes with a 1.6-liter, 115-horsepower, four-cylinder engine — and a considerably higher price tag than that stuck on the tested Suzuki.

Although the Aerio LX gets nothing for turning heads, its ugliness imbues it with a sort of street-rough swagger — something akin to baggy jeans, waist chains, head rags and multiple tattoos. People leave the car alone, stay out of its way. In urban combat, that is a good thing, especially in the shopping mall, parking-lot warfare of transporting gifts bought, given and returned during the Season of Peace.

Engine/transmissions: The Aerio LX sedan is equipped with a standard 2.3-liter, 16-valve, in-line four-cylinder engine that develops 155 horsepower at 5,400 revolutions per minute and 152 foot-pounds of torque at 3,000 rpm. The car gets a standard five-speed manual transmission. An electronically controlled, four-speed automatic is optional.

Model range: The front-wheel-drive Aerio LX sedan replaces the GS model for 2004. Other models include the base Aerio S and premium Aerio LX AWD.

Capacities: All Aerio sedans have seating for five people. Cargo capacity is 14.6 cubic feet — quite generous for a compact car. Fuel capacity is 13.2 gallons. Regular unleaded gasoline is recommended.

Mileage: I averaged 28 miles per gallon in mostly city driving.

Great bang for the buck

So far my Aerio is very good! Bought it used from a Cadillac dealership as a trade in. It has the 5 spd., so it?s nice and peppy! The interior is not great as far as looks, but it?s plenty roomy for over 6ft. people. My only complaint is that when it?s windy out, prepare for a fight! The Aerio dances in the wind like a drunk at a party, it?s all over the place! Great little commuter, but don?t expect to turn heads or get any compliments.

November 8, 2017
By Knitknot7 from Georgia
Used to own this car

I was lucky enough to be given a brand new 2004 Suzuki Aerio SX. It only had 9 miles on the speedometer? For the first 5 years I drove it back and forth to work. I could fill the tank up on Sunday night and it would last until Saturday morning. The model has a great sound system with 6 CD changer. I am 6'1" and there was plenty of leg room to spare. After the first 5 years I got into a hobby that had me traveling around the Southeast US quite a bit. Excellent highway miles. At about 8 years old things started to need to be replaced (Which I understand). The only down side to it is that the parts are very expensive to replace and hard to find. Don't expect anyone to have the part on hand. It will almost always need to be ordered. I got stranded in Savannah, GA when something went wrong with the passenger side wheel well. It took three days to get the part in and then an extra day to replace the part because the Suzuki uses a special tool that only one mechanic had and he had been on vacation.

This car is excellent in all weather conditions and very roomy with reclinable seats. Perfect car for anyone. 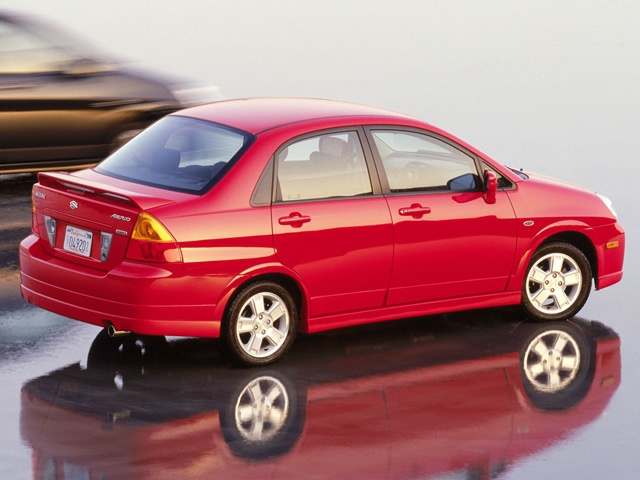 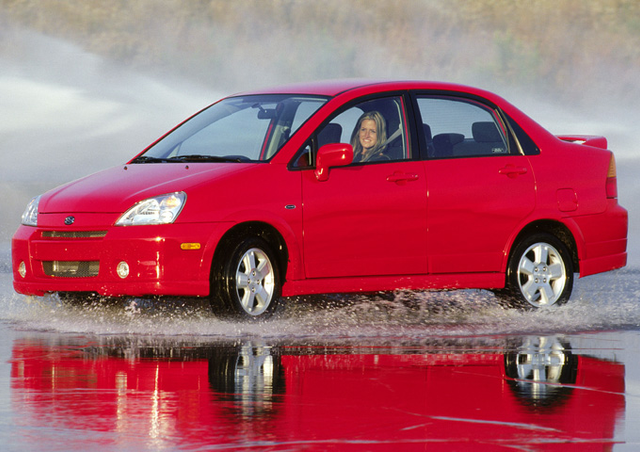 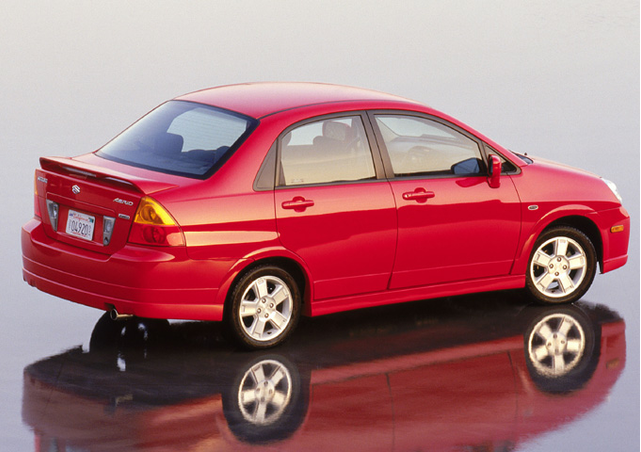 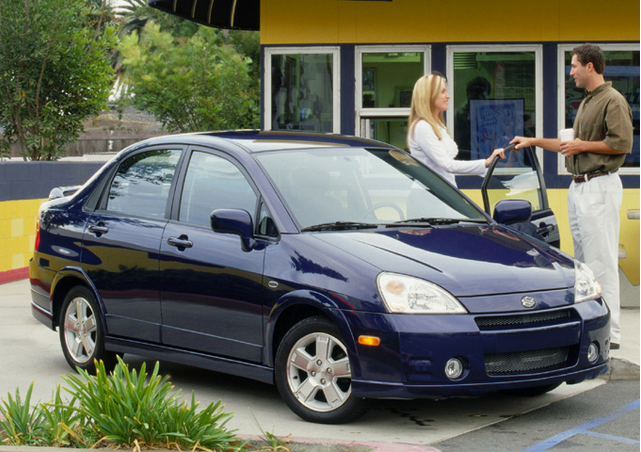 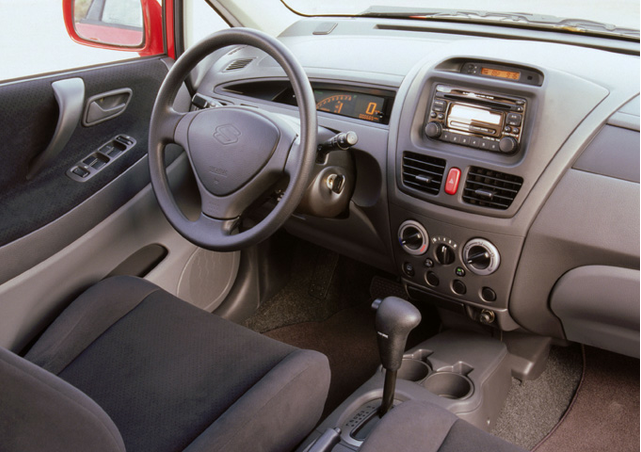 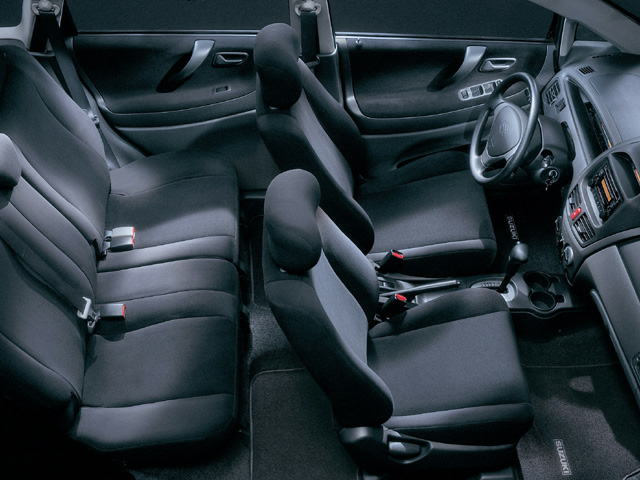