Our 2001 Suzuki XL7 trim comparison will help you decide.

A year ago, when Suzuki introduced its new, bigger, better XL-7 sport utility vehicle to journalists at the Los Angeles Auto Show, it seemed like too much hoopla for a fairly routine truck.

I missed the point. In retrospect and after subjecting the XL-7 to my usual highly scientific battery of road tests, I realize that this SUV is more than just a stretched version of the Grand Vitara.

I also realize that its introduction was an important moment for the small Japanese automaker, better known for its sports motorcycles. This marked the first time Suzuki had a four-wheel vehicle that was not just cute and funky, but a fully capable SUV built for American families, one that could compete against the vast array of sport utilities from the world’s automakers.

Maybe not the smoothest or the most stylish, XL-7 does offer space, features and amenities comparable to SUVs costing thousands more. With its lengthened wheelbase and strengthened V-6 engine, XL-7 is greatly improved over the standard Grand Vitara.

The wheelbase is stretched 12.5 inches, with a body-length increase of 19 inches. These numbers represent a huge difference for a compact SUV, making it more suitable for toting full-size friends and family members and covering long-distance freeway miles in relaxed comfort.

It also allows Suzuki to offer a third row of seats, which adds two more seating positions. But unless your friends are leprechauns or your kids are very small, you’ll find the third-row space to be laughable. As far as I’m concerned, all it does is steal cargo space.

The other five seating positions are not bad. The cabin still feels narrow, but legroom and headroom are more than adequate.

In case you haven’t made the connection, XL-7 is shorthand for extra-length seven-seater.

XL-7 comes up hard against a new generation of SUVs, the so-called cute utes represented by such good-selling craft as Ford Escape/Mazda Tribute, the redesigned Toyota RAV4 and Honda CR-V, and the new Jeep Liberty.

The Jeep is the one having most in common with XL-7 because of its tough, off-road-capable, four-wheel drive. This truck-based system, which is favored by boondockers, has a dual-range transfer case that lowers the gearing for tackling mud, boulders and other tough off-road conditions.

The Escape and most other compacts offer the car-based all-wheel drive, which is lighter and more refined than four-wheel drive, but less capable. It’s a front-drive system with a coupling to the rear wheels using electronics and hydraulics to make it work.

Whichever is the preferred system depends on what you want to do with your compact ute. The rear-drive/four-wheel system can tackle the rugged Jeep trails, but all-wheel drive is better for such things as snow, loose dirt surfaces or highway driving.

XL-7 is also available with rear-drive only, which for most people would be the way to go. Besides, XL-7 is a bit long and low-slung for a ny serious assaults on natural terrain.

On the highway, the XL-7 has a nice ride and a stable feel, despite its trucklike body-on-frame construction. Handling is surprisingly nimble in relation to its boxy appearance, with flat cornering. Steering is numb but precise.

The 183-horsepower engine is powerful enough, but it is a small-displacement V-6 that has to work hard to make that power. Acceleration is unimpressive off the line but picks up steam as the engine speed increases.

Under hard acceleration, the engine sets up an intrusive roar. At freeway speed, it turns quiet and relaxed.

For about $26,000, the Limited model comes with leather seating, all the normal power and convenience features, running boards (which seem redundant on such a low vehicle), a good stereo system and a big power sunroof.

The only options on the tester were $300 heated seats, which you can skip in central Arizona, and the usual floor-mat charge, in this case $95. They better b some good floor mats.

I just handed my 2001 XL-7 to my sixteen year old granddaughter as I have owned it since new. The vehicle has always had good care and no matter it's age it is very reliable. With it's lower center of gravity than many 4x4's it is very stable in 4wd on snowy roads.

Most reliable vehicle I have owned

August 6, 2016
By Ole reliable from Houston Texas
Owns this car

Bought new in Oct 2001. Just rolled past 300,000 miles. In repair shop once for A/c (500 repair) 2.7 L Suzuki motor is bullet proof still has original plugs just checked and still good Best car I have ever owned 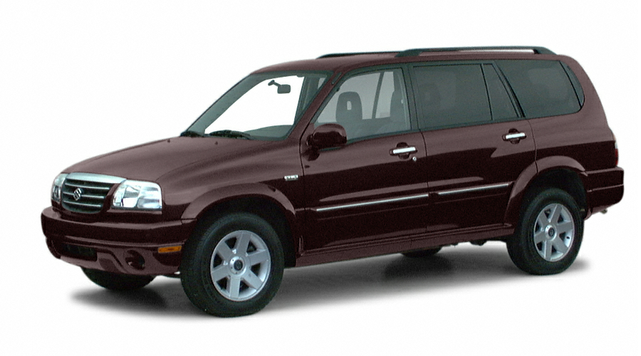