There used to be a hard line between mainstream mid-size sedans and premium mid-size sedans. The Kia K5 makes that line so fine that it actually disappears. This year, millions of Americans will march out like dutiful little automatons and buy the latest Camry, Accord, Altima, Sonata, Legacy or Malibu without the slightest thought to finding something better. That is a true shame. But, then, not everyone is open to change, and they’ll miss out because of it.

Kia chose to take the less trodden path with its new K5. The car replaces the Optima in the lineup. The Optima served Kia well from its humble beginnings in the 2000s to its meteoric rise to prominence in the last few years. Kia has big plans for its mid-size car. With a completely new design came the need for a new name used around the globe: K5.

This new name helps better position the car where it truly belongs in the market, and the alphanumerical name allows for global recognition, which the car deserves. Why? Because it’s more apt to compare the K5 to members of the premium mid-size sedan segment than it is to compare it to the Camry-Accord gang.

What Makes a Premium Mid-Size Sedan?

The premium mid-size sedan segment has evolved just like everything in the automobile industry, but at the very least, we can say this about the segment: The cars feature an eye-catching design that stands out in a crowd, interior materials and fit and finish that are a cut above the mainstream offerings, stronger performance and handling than average, and a long list of advanced technology and features.

There are plenty of automakers out there that will claim this is true of their car. We all know there’s a difference between what the marketing department puts in its press release and what you actually feel when you get in the car.

While the attributes above are the qualifiers for the segment, there’s also a quality to the premium mid-size sedan that can’t be easily quantified. It’s something that’s felt. That feeling comes from every aspect of the car and is the culmination of its design and engineering. The car has to feel premium and feel special.

If you go to the Kia K5 website, you’ll see the tagline is “Evolution of the sedan.” What does this really mean? It means that the K5 is a natural move forward for the brand’s mid-size sedan. The Optima was a good sedan, but Kia wanted to take things further with the K5. The K5 doesn’t hold back. It’s a bold move to make Kia’s mid-size sedan go above and beyond the competition. 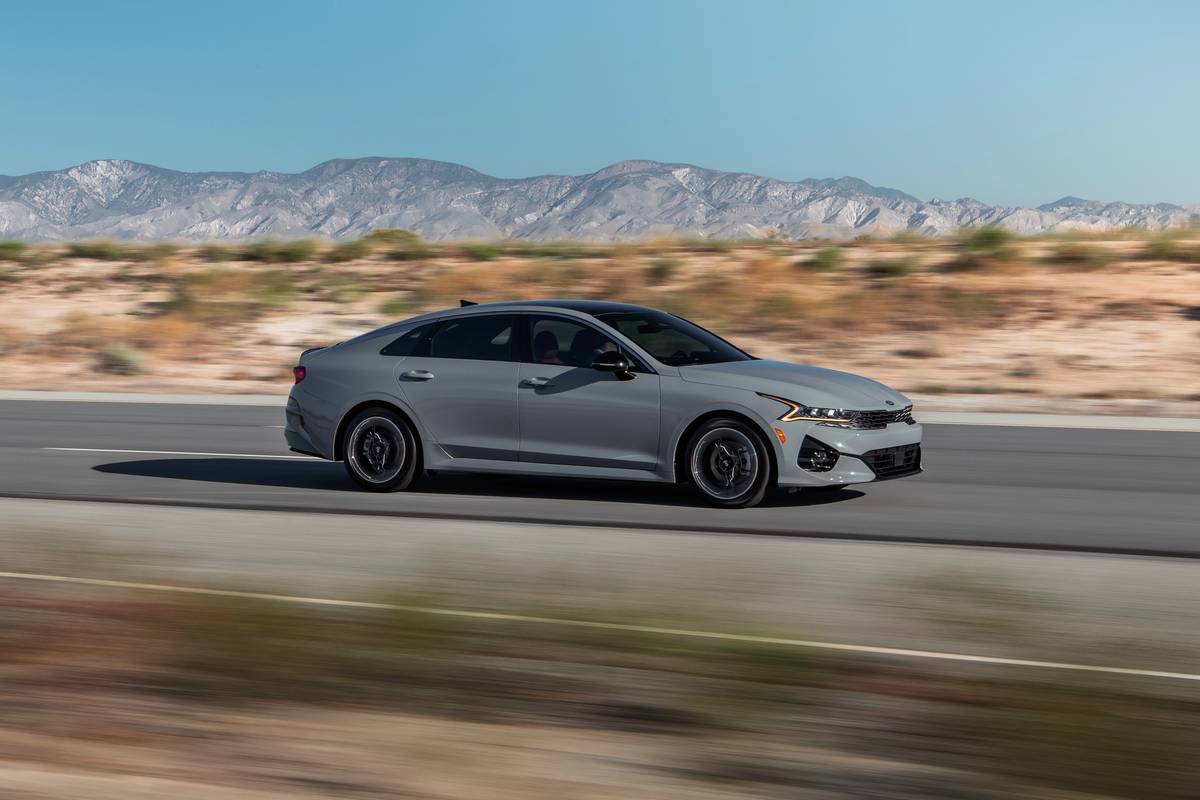 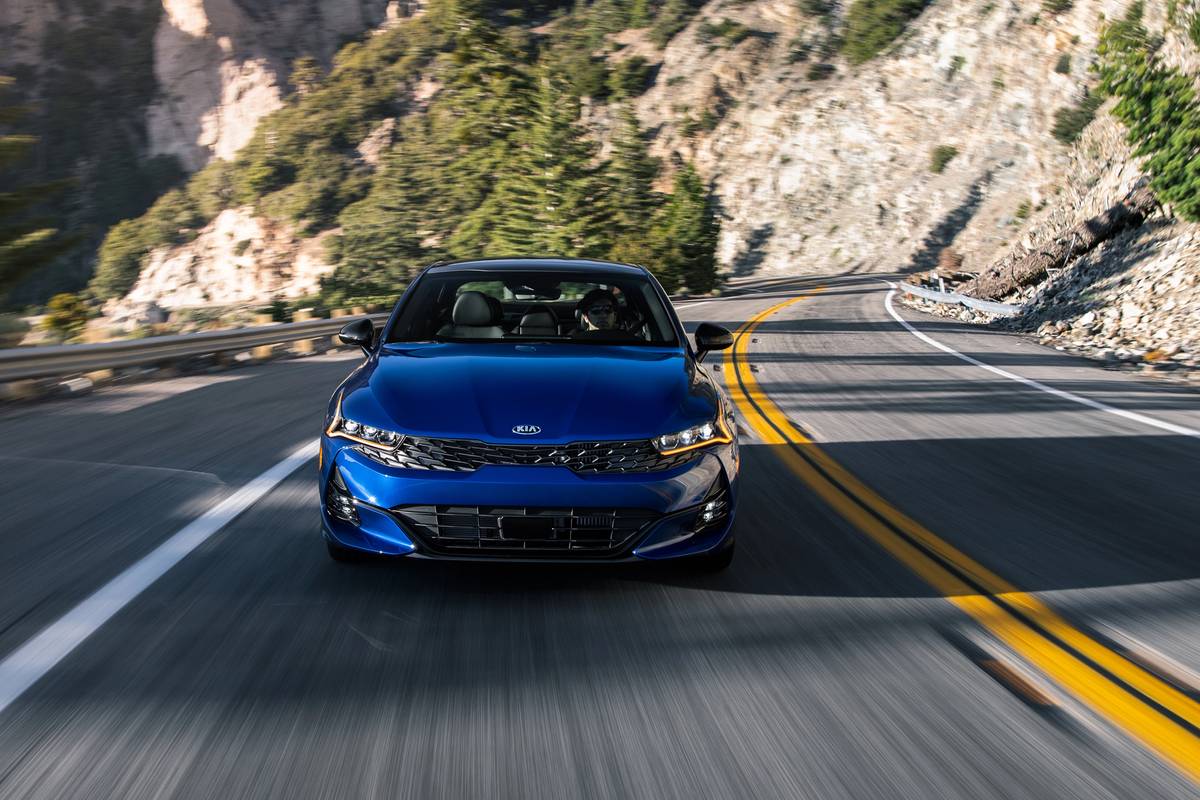 Kia’s design team started with the overall shape of the car. They utilized a four-door, fastback-like profile to give the K5 a low, lean and sleek overall appearance influenced by the upmarket Stinger sports sedan.

At the front, the grille stretches across the nose with a unique shark-skin-inspired mesh and connects with what Kia calls Heart Beat daytime running lights. Down the side, you get a low crease down by the rocker panels, and up high you’ll find a chrome swoosh that widens near the tail of the car.

The result is a fast-looking sedan that is immediately eye-catching. The K5 doesn’t look like other cars on the road.

The Interior and Technology 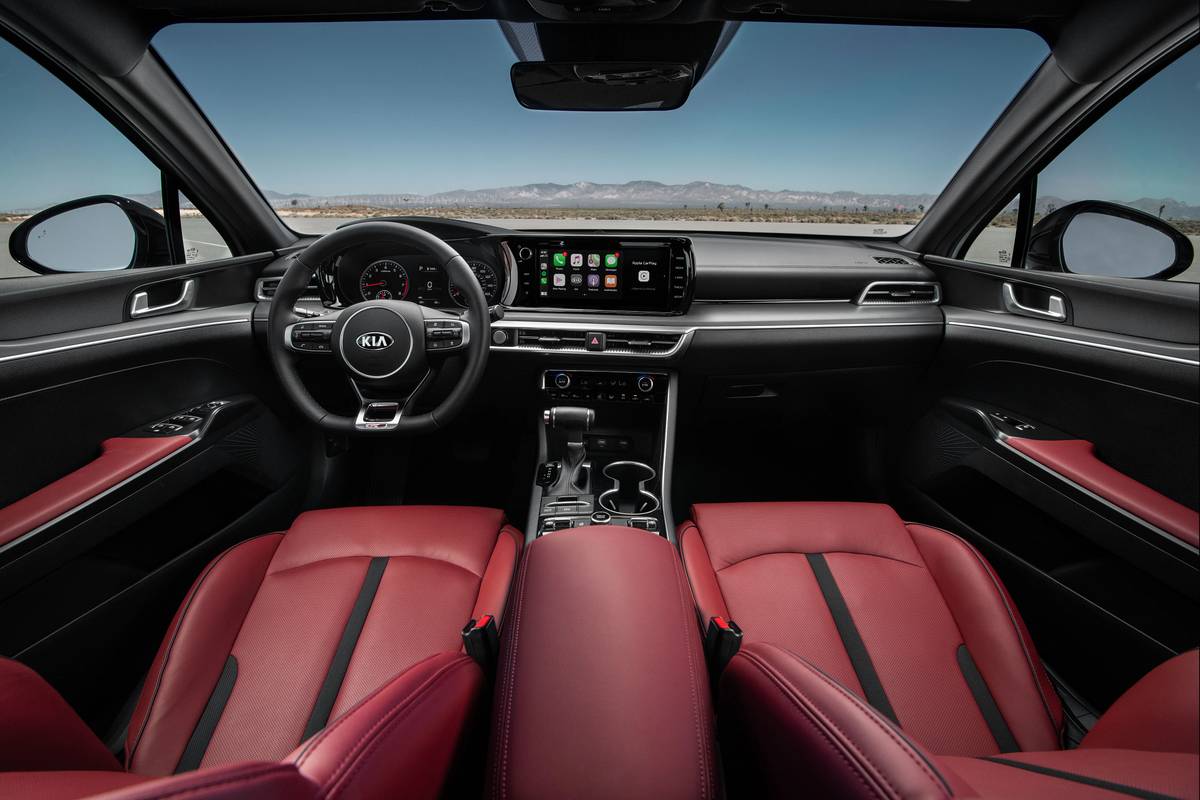 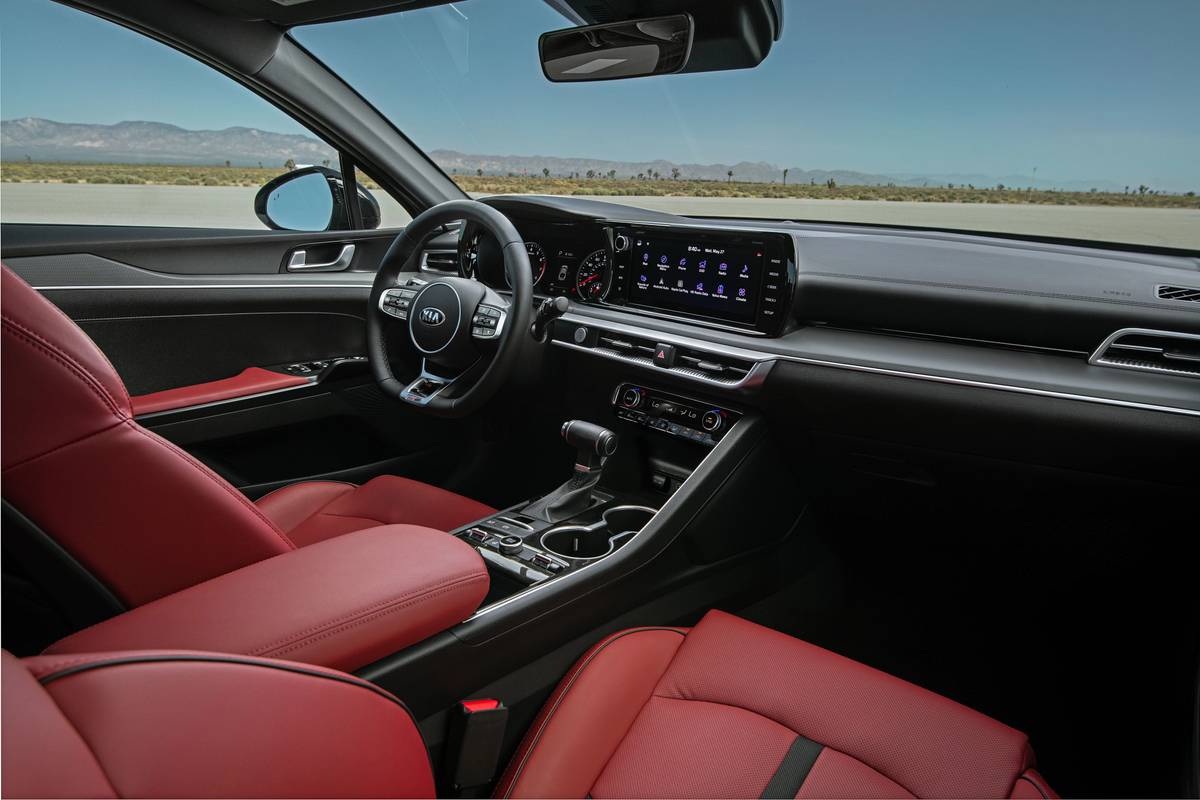 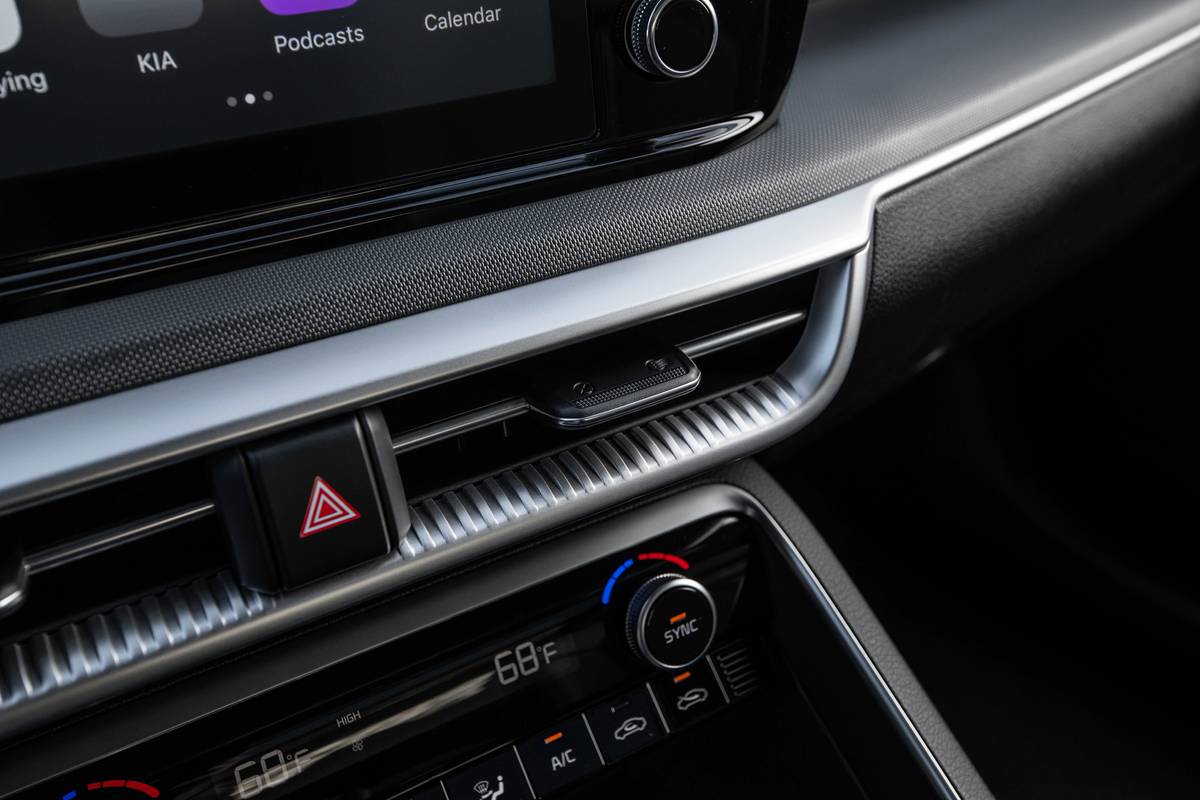 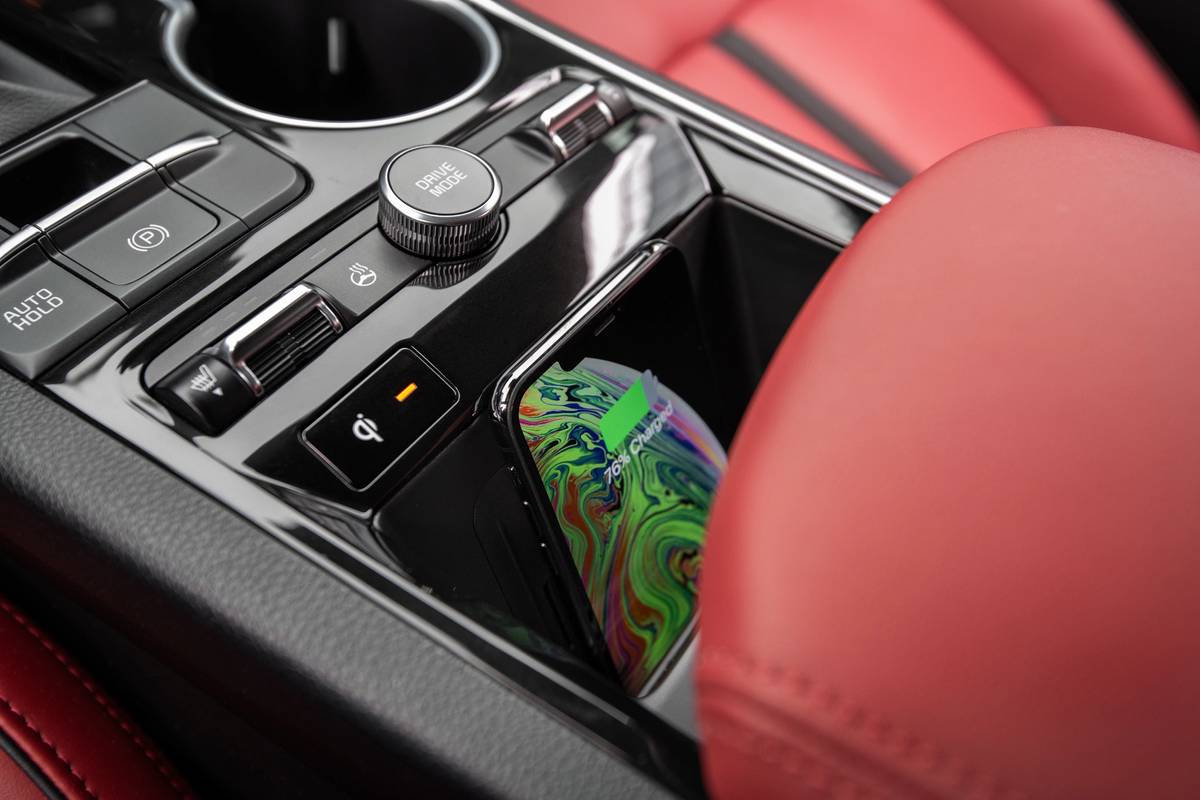 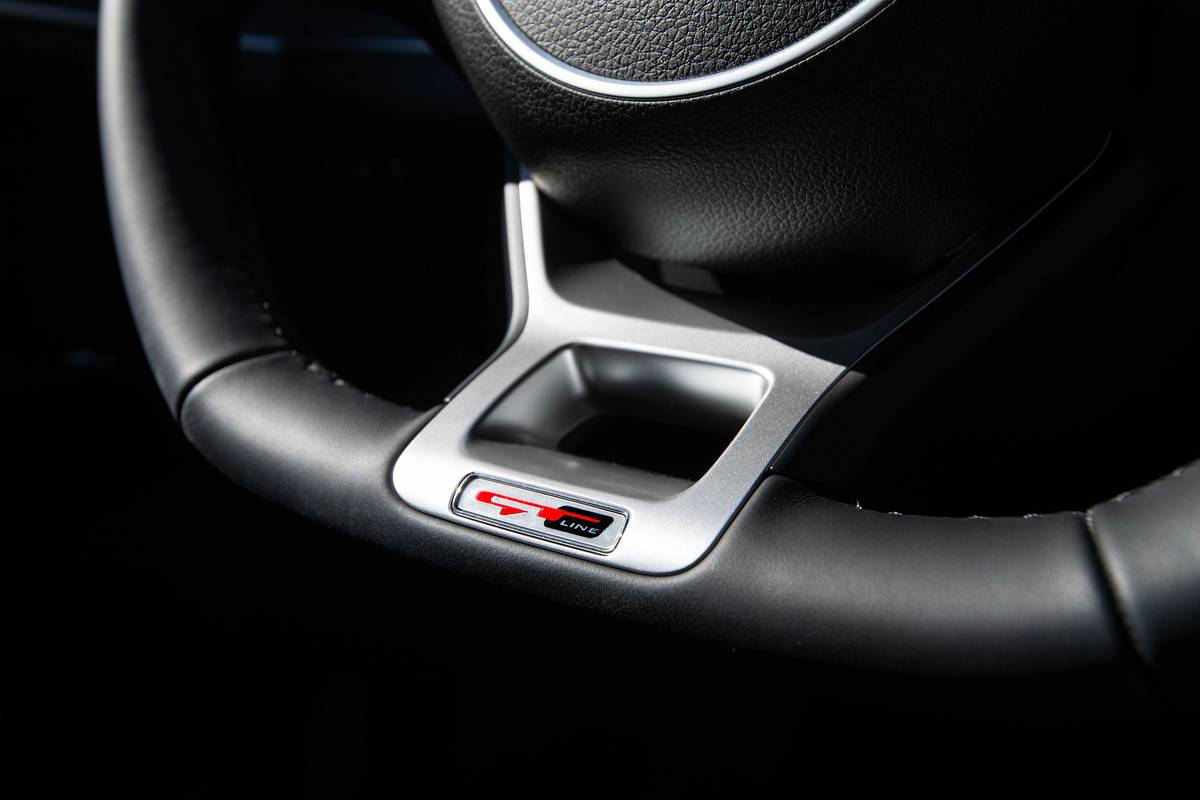 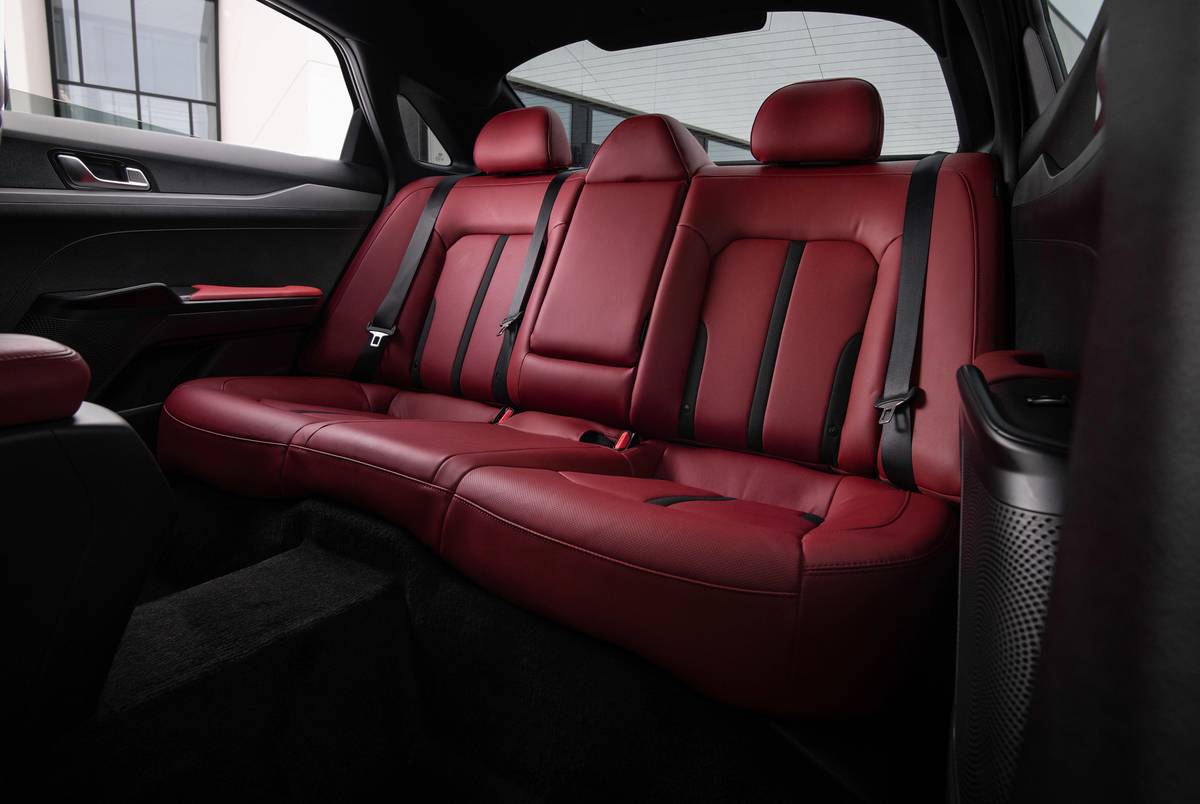 Open the door and you’ll find a design and fit and finish you would have believed was Germanic in origin. Kia’s interior is downright European luxe. From the aluminum accents and SynTex Seating Material to the driver-centric cockpit and Ultra-Lux Panorama sunroof, the K5 delivers on an experience that’s uncommon from a mainstream brand.

All of the things called out above are great, but what sets the K5 apart from the competition is how they come together. These features and materials are great on their own, but the overall design and fit and finish are what elevate the K5 above its mainstream competitors. 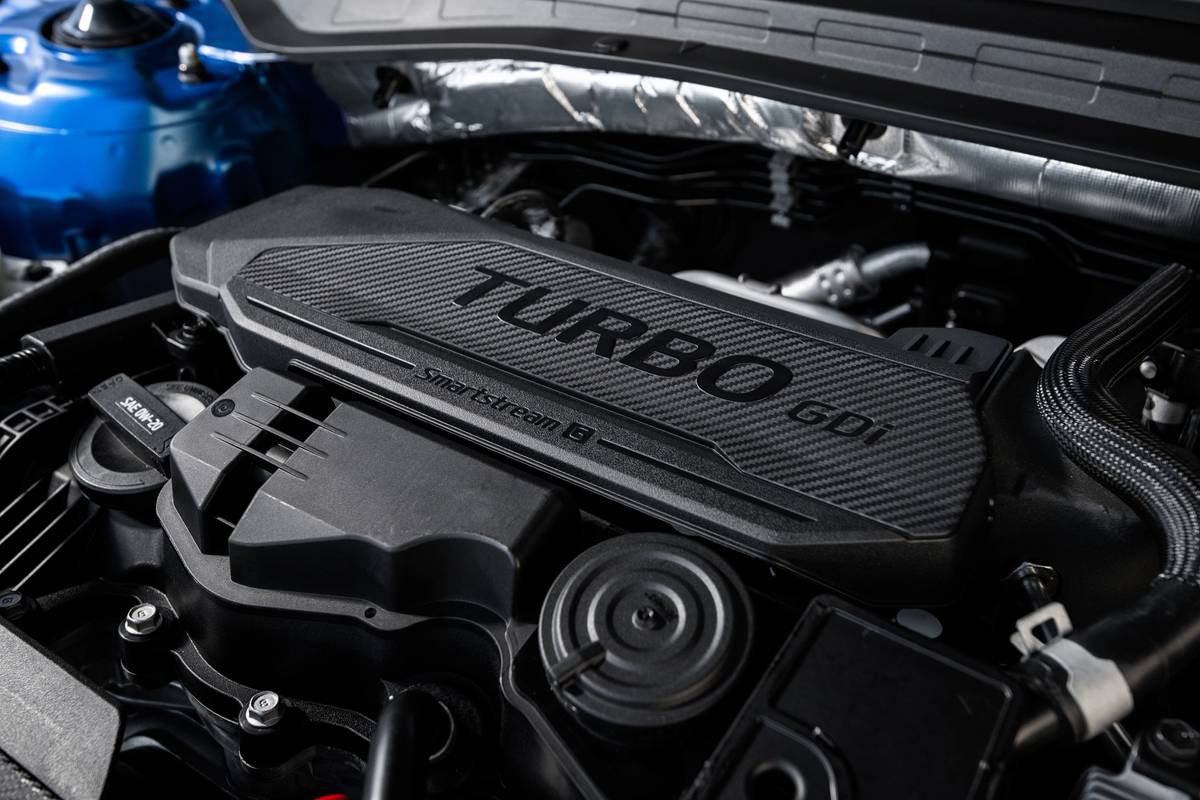 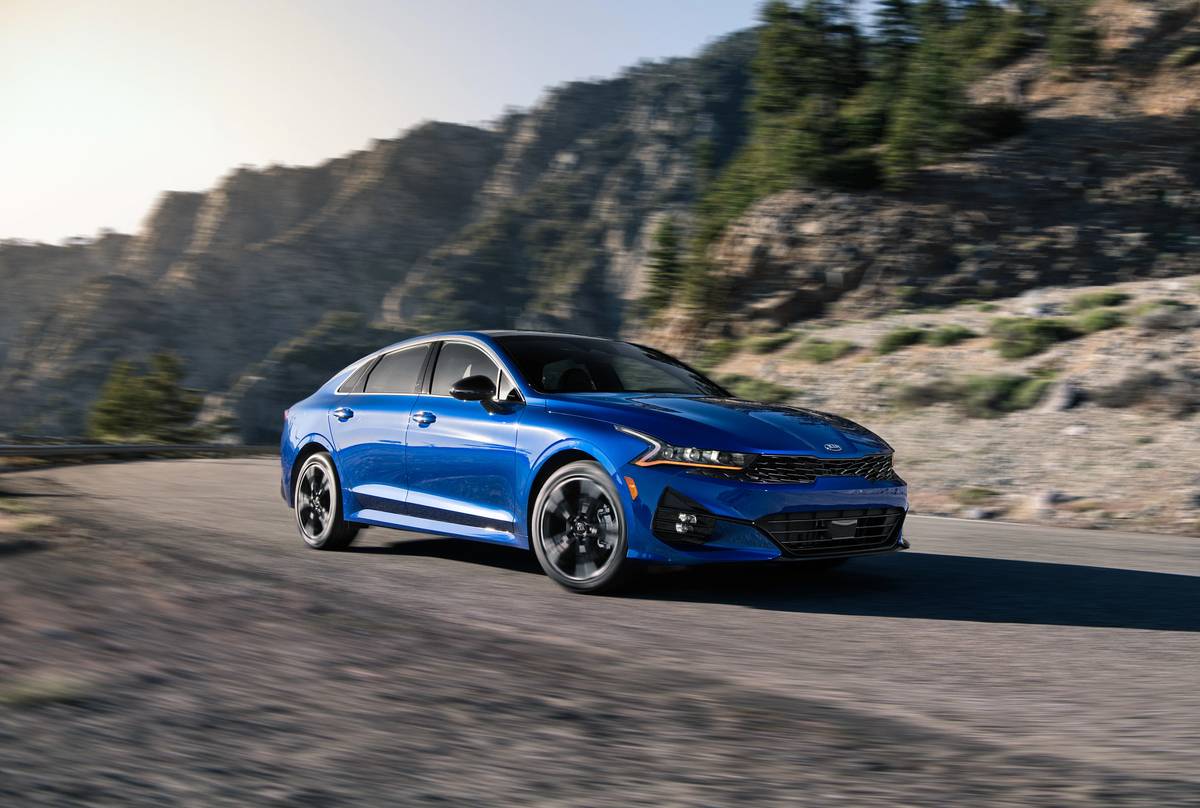 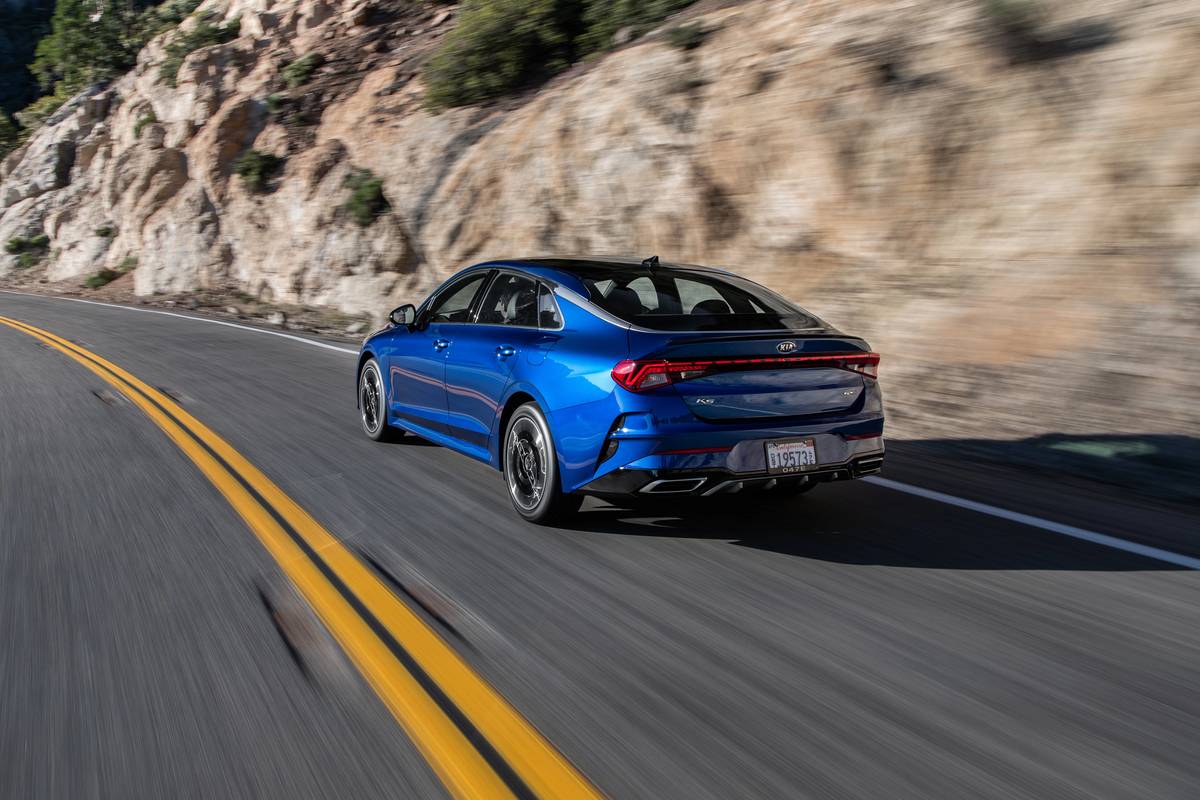 When it comes to performance, you’re looking at two different options. The K5 features a turbocharged 1.6-liter four-cylinder engine in four trim levels. This engine is no slouch. It delivers 180 horsepower and 195 pounds-feet of torque. Max torque is available at a low 1,500 rpm, which brings the power on quickly, making for a fun drive. It’s mated to an eight-speed automatic transmission and, depending on the trim level, the transmission will send power to either the front or all four wheels. The all-wheel-drive system is a first for Kia in the mid-size segment and provides driver confidence in wet weather or in snowy conditions.

Step up to the GT trim of the K5 and you find something special — a turbocharged 2.5-liter four-cylinder engine that churns out a strong 290 hp and a best-in-class 311 pounds-feet of torque. That power goes through an eight-speed ”wet” dual-clutch automatic transmission (DCT) and is sent to the front wheels. The quick-shifting DCT helps K5 establish its credentials as a sports sedan.

The K5 outpaces much of the mainstream competition in the ride and handling department thanks to a well-damped suspension and wide, sporty stance. This is true in any trim level, but the GT takes things up a notch, providing GT Sport Tuned Suspension, GT Brake Calipers with larger discs and unique 19-inch alloy wheels.

The K5 GT is a bona fide killer when it comes to performance, and to prove it, let’s take a look at how the K5 GT stacks up against a couple of premium mid-size sedans.

On Kia’s website, the company notes the K5 is faster from 0-60 mph than the BMW 330i. The K5 also beats the BMW 330i in quarter-mile and handling performance, bettering the Bavarian machine in independent tests certified by AMCI Testing reported in August 2020. That’s just one of the cars in the premium sedan segment. The K5 is a fantastic challenger to multiple cars in this segment.

So, starting with the BMW 330i — the most natural benchmark for the segment — the Kia K5 stacks up very well when you look at the things that matter. The K5 has a more modern design than the BMW, and both cars have high-quality interior materials and an impressive list of features. When it comes to performance, as noted above, the K5 outperformed the 330i in several AMCI tests certified in 2020, but let’s get a look at the spec breakdown below.

As you can see, the Kia has the larger, more powerful engine. The K5 offers up 35 more hp and 21 pounds-feet of torque. That’s quite a bit more power. The BMW is more fuel-efficient, but only slightly so. It’s safe to say the performance difference between the two cars far outweighs the slightly better fuel economy of the BMW.

Then we get to price. This is where the Kia K5 stands out. It’s $10,660 less expensive than the BMW. That is a huge price difference. Just to put that into perspective, you can buy a nice used car for $10,660. So, if you had the money to buy a BMW 330i, you could actually afford to buy K5 and also buy a nice used car for, say, your teenage son or daughter.

The Kia K5 GT and the Acura TLX

The Acura TLX versus the Kia K5 is a natural comparison. Both the TLX and the K5 GT have the same FWD layout. They also both have exterior styling that’s eye-catching, sharp and modern. Inside, there’s clear attention to detail and materials a step above the mainstream mid-size sedan segment. Then there’s performance, and finally, how the whole package compares to the car’s price tag.

As you can see from the table above, the Kia K5 GT not only holds its own with the Acura TLX. In many ways, it beats it. It has a larger engine with more horsepower and torque, but it still manages to get better gas mileage.

The TLX’s only true advantage is that it can be had with an all-wheel-drive system, but that all-wheel-drive system will cost you nearly $9,000 over the price tag of the K5 GT. The other notable feature of the TLX is its 10-speed automatic transmission. However, this is nullified by the quick-shifting “wet” DCT and the additional horsepower and torque the K5 GT possesses. All in all, dollar for dollar, the K5 delivers.

The Volvo S60 is a car that stands out even in the premium mid-size sedan segment as a unique car. Its Scandinavian styling and strong performance make it a truly interesting vehicle, but the Kia K5 doesn’t come up short here, either. Its styling is certainly different than the S60, but it’s arguably more modern and eye-catching, whereas the S60 is more sedate. There’s a performance contrast, too.

Stay in the know

Cars.com editors produce reviews, videos, and news updates. Add your email and get the latest info in your inbox.

Again, as you can see from the table above, the Kia K5 presents the more enticing option overall. The car has a larger engine with more power. While the S60 T5 does manage to edge out the K5 GT on the highway in terms of fuel economy, in the city, the Kia actually does better and the combined mpg number is the same.

As with Acura, all-wheel drive can be had, but the K5 GT widens the performance gap even more. The K5 GT offers up 40 more horsepower and a whopping 53 pounds-feet of torque. The price delta is significant, as well, with the K5 GT costing $8,360 less than the front-wheel-drive version of the S60 and a wild $10,660 less than the all-wheel-drive version.

With all this in mind, the Kia K5 has solidified itself as a true contender in the premium mid-size sedan segment. It’s at least as upscale if not more than the competition in that segment, and it’s faster and handles better than many of the segment’s stalwarts. It does all that at a much lower price, too.

Kia says the K5 is the evolution of the sedan, and after taking a closer look at some of the competition, it’s clear this is not hyperbole or just some slick marketing. The K5 is all about substance, and that’s what makes it a unique and bold option for any buyer seeking something new and different.

2022 K5 GT-Line shown with optional features. Some features may vary.

This advertisement was sponsored by Kia. Cars.com reporters and reviewers do not participate in the creation of sponsored articles.