The verdict: Mini’s original small, sporty model still proves massively entertaining, but it’s getting pricey for what it delivers.

Versus the competition: Small, sporty cars are becoming increasingly rare in the SUV-crazed U.S., but there are less expensive and equally entertaining import options from sources like Hyundai, Volkswagen, Kia, Fiat and a host of other automakers.

Driving a Mini Cooper in a world full of towering crossovers and SUVs is a sobering yet refreshing experience. Yes, the latest Mini is considerably larger than its 1960s minimalist original; it’s even bigger than the rebooted model that showed up nearly 20 years ago. Under BMW’s guidance, it’s become more sophisticated, more technology-packed and more reliable, too. The current top-performance model is the John Cooper Works version seen here. It features unique styling, a more powerful engine, special seats and trim, and an adaptive suspension. And for 2019, a limited-availability Knights Edition is available that brings even more unique content. But nearly 20 years into its reboot and after a mild refresh for 2019, does Mini still deliver driving magic?

The exterior look remains the same, of course, with a bulldog-faced two-box design that’s now considered alongside the Jeep Wrangler, Ford Mustang, VW Beetle and Porsche 911 in the realms of iconic styling. Changing it much wouldn’t be prudent … or really even possible. The Mini is still a packaging marvel, able to fit four people into a space that doesn’t look like it could.

A light refresh for 2019 brought barely noticeable items, like Union Jack taillights to the exterior, but even with one parked next to a 2018 model you’d be hard-pressed to pick out which was the newer car. A limited-availability Knights Edition brings a few more styling tweaks, like 17-inch John Cooper Works black wheels, piano black exterior paint with a silver roof and mirror caps, white turn-signal lenses and a rear spoiler. Mini styling is a traditional look to be sure, but it’s immediately identifiable as a Mini from a distance. If you want something a bit more modern and adventurous, there are sporty alternatives like the new Hyundai Veloster N or Kia Soul GT Turbo that stack up well against the Mini Cooper Hardtop JCW .

Just As Entertaining As Ever

Half the draw of a Mini Cooper is its tiny footprint — it’s unabashedly small, with dimensions meant to fit into European urban centers with relative ease. But the other half of its appeal is Mini’s go-kart-like driving dynamics. Yes, it’s cliché, but it’s also remarkably accurate. The JCW performance model brings a standard sport suspension that tightens up the Mini’s already solid body control even further.

Thanks to our test car’s 17-inch wheels (in lieu of the super-low-profile 18-inchers it could have had) the ride was choppy but tolerable, even over winter-cratered Midwestern roads. A twisty back road brought grins aplenty to my face, and a 600-mile road trip didn’t leave me wishing for a land yacht instead of this speedboat.

It’s not as quick as you might expect, however. Despite 228 horsepower generated by the BMW-derived, turbocharged 2.0-liter four-cylinder engine, the Mini Cooper JCW is best described as zippy, not fast. It feels faster than it is simply because there isn’t a whole lot of vehicle around you, and it changes direction with eagerness, disguising its comparatively pokey acceleration with nimble reflexes.

The Knights Edition even adds a little aural trickery to the mix: a gimmicky Bluetooth-activated adjustable exhaust flap meant to be used on the track. It opens up a throaty, popping soundtrack that makes the car sound quicker than it is. One Mini spokesperson said it even detects whether or not you’re driving the car aggressively enough and closes itself if it thinks you’re just commuting through town. Frankly, it feels like it’s going to be the first thing to break on the car, and the thumb-sized remote control button that controls it is almost certainly going to be misplaced at some point.

Fuel economy isn’t the only reason to buy a vehicle this small, but it’s usually a factor. The Mini Hardtop John Cooper Works two-door is about mid-pack in its segment, earning a 23/32/26 mpg city/highway/combined rating for the six-speed manual car, 25/32/28 mpg for the automatic. My considerable voyaging in the Mini, which included a 600-plus mile jaunt from Detroit to West Lafayette, Ind., saw a combined rating of 25 mpg — not unreasonable given my elevated speeds and windows-down, moonroof-open configuration.

In comparison, the Hyundai Veloster N (which comes only with a manual transmission) is rated a less impressive 22/28/25 mpg — the exact same figures as the high-strung, high-output Honda Civic Type R. Stick a manual transmission in the VW GTI, however, and you get a better 24/32/27 mpg rating. If saving fuel is your goal, a Fiat 500 Abarth might be your best option: It nets a 28/33/30 rating for the five-speed manual transmission, 24/32/27 mpg for the six-speed automatic. It gets significantly less horsepower from its turbocharged engine, but also a lot less weight.

You might think a vehicle this small wouldn’t be very comfortable for its occupants, but if so you’ll be pleasantly surprised. Front occupants have plenty of room, with lots of headroom (even with the moonroof) and legroom. The car’s low beltline helps visibility, and there’s excellent seat adjustability up there. The backseat is, as expected, cramped for full-size humans. It’s not terribly easy to get into or out of, but this is a subcompact two-door hatchback, not a full-size SUV, so that’s not a ding against the car. Backseat passengers do have decent headroom, at least, thanks to the Mini’s two-box design.

The JCW comes with some aggressive sport seats that are unique to the trim level, but they’re comfortable for long-distance drives as well as occasional track days. Of course, a big draw of the Mini brand is its quirky interiors, which feature a far more stylistic design than most brands on the market. A generic interior this is not: From the round central console display to the toggle-style switches for windows and other functions, the uniqueness and appeal of the Mini’s interior can’t be denied. It’s also highly customizable; work with your Mini dealer and you can recolor and reconfigure the trim in a number of ways through accessory parts. All it takes is money.

The multimedia system’s menus might look familiar; they’re lifted, with some graphical modification, from BMW’s proprietary system. You can operate it in a number of ways, using a controller on the console between the seats, the touchscreen or voice controls. There’s a mood-lighting trim ring around the large round display that can be configured to do a number of things, from acting as a tachometer to changing color along with the drive mode you’ve selected. It’s gimmicky, sure, but it’s also unique and interesting, and it beats a sea of gray plastic with a few bright-colored bits, which is the norm among most of Mini’s competitors.

You’re obviously going to have a lot more passenger room in just about any of the Mini’s rivals, with the exception of the truly tiny Fiat 500 Abarth. The Honda Civic and VW GTI are based on much larger vehicles to start with, providing significantly better backseat legroom and improved cargo capacity. The Hyundai Veloster is somewhere in the middle; its unique three-door configuration allows for a more usable backseat, but headroom back there is decidedly compromised by the car’s sloping roofline.

Suffice it to say the Mini Cooper Hardtop is fine for two people on a weekend getaway, but three wouldn’t be easy and four isn’t possible without a car-top carrier of some kind. Full-size suitcases don’t fit well in there, and even a couple of roll-aboard cases would quickly fill up the Mini’s available interior room.

It’s a subcompact car, so its size and weight may be a disadvantage in a crash with a larger vehicle, but within the Insurance Institute for Highway Safety’s Minicars class, the 2019 Mini Hardtop three-door hatchback performed well —especially when equipped with optional forward collision warning and LED headlights. It got the top rating in every one of the agency’s crashworthiness tests. The National Highway Traffic Safety Administration didn’t go quite as far with its ratings, giving the Mini Hardtop four out of five stars; it fell one star short in each of the front- and side-impact tests. The Knights Edition brings a lot of safety equipment that’s not standard by including the Active Driving Assistant Group. It adds forward collision warning with autonomous emergency braking, parking sensors and adaptive cruise control. What isn’t available on the Mini Hardtop, however, are blind spot warning sensors and lane departure warning.

The biggest surprise with any Mini generally tends to be its price tag, and this model is no exception. While you can get a base 2019 Mini Hardtop for $22,750, including destination, the John Cooper Works version starts at $32,750 and goes up from there if you want to add common options, like navigation. My test vehicle was even more dear than that, adding the limited edition Knights Edition Package (which isn’t offered for 2020 and is already sold out for 2019) and its special styling, paint, trim, wheels, premium audio, head-up display and heated front seats. It also had navigation and another group of Knights Edition accessories (including the trick exhaust system) for a total of $41,065.

That puts the Mini Hardtop JCW among some stiff competition for the money. A Hyundai Veloster N, which features a much more aggressive, track-oriented list of abilities versus the Mini, starts at a much lower $27,830, and even fully loaded it doesn’t top 30 grand, making it one of the great performance deals of the year. Volkswagen will sell you a Golf GTI for $28,490 to start, but you can easily push that up into the high 30s if you start adding options — or you can just start with a Golf R, which gives you more power, standard all-wheel drive and an electronically adjustable suspension for $41,290. Honda’s Civic Type R is a similar bargain by comparison; the powerful compact hatchback goes for $37,230 to start, while the Fiat 500 Abarth is a more budget-friendly smile-generator, starting at $22,240 and just topping $30,000 fully loaded.

To pay that kind of money for a Mini you have to really specifically want a Mini. There are a lot of other cars out there that outperform it and are more comfortable, more spacious and more efficient. But few of them can provide the combination of quirky character and driving fun that Mini has always been so very good at. Keep your finger off the silly options list, and you can get out the door with a reasonably priced car that’s sure to satisfy an enthusiast driver. 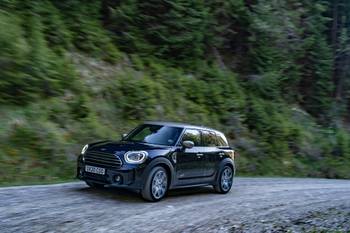