Looks like: The next hero car in the “Fast and the Furious” movie franchise

The Toyota Supra sports car is beloved in enthusiast circles, and that’s reflected in the stratospheric prices of used models. Last offered as a 1998 model, the Supra returns for the 2020 model year — but the way it’s been reborn might surprise long-time fans who haven’t been following its development. The new Supra, which has two seats, rear-wheel drive and is being shown for the first time at the 2019 North American International Auto Show in Detroit, was developed with BMW and shares its platform with the German luxury brand’s redesigned Z4 roadster. And the heart of the new Supra is a 335-horsepower, turbocharged 3.0-liter inline-six-cylinder engine sourced from BMW.

The 2020 Supra will be offered in 3.0, 3.0 Premium and Launch Edition versions. It’s built in Graz, Austria, and hits dealerships this summer.

Toyota says the Supra’s design recalls the brand’s 2000 GT sports car of the late 1960s and the previous, fourth-generation Supra, and you can see design elements of both cars in the exterior styling. There’s a double-bubble roof and blacked-out front pillars like the 2000 GT, while the LED headlights and front end offer a modern take on the fourth-generation Supra’s face. Standard 19-inch forged-alloy wheels that are wider in back are fitted with Michelin Pilot Super Sport summer tires.

The driver faces a three-spoke steering wheel and a color screen that takes the place of conventional gauges. A color head-up display is available. The 3.0 trim has power-adjustable sport seats with a memory feature that are finished in Alcantara fabric, while the 3.0 Premium has leather upholstery and seat heaters.

In contrast to the Supra’s flowing exterior lines, the cabin is defined by the crisp horizontal lines of the dashboard, which is topped by a central multimedia screen. The 3.0 model has a 6.5-inch display with a rotary controller on the center console. The 3.0 Premium gets a larger 8.8-inch touchscreen, navigation, wireless Apple CarPlay, a JBL premium stereo and wireless phone charging.

Related: Return of the Toyota Supra: 3 Things We Gotta Have

Like its famous predecessor, the 2020 Supra is powered by a 3.0-liter inline-six-cylinder engine. The engine is turbocharged and makes 335 hp and 365 pounds-feet of torque in all trim levels. Engine technology includes a twin-scroll turbocharger, direct fuel injection, continuously variable intake and exhaust valve timing, and variable lift on the intake valves.

Power is sent to the rear wheels through an eight-speed automatic transmission with steering-wheel shift paddles (a manual transmission isn’t offered). The car has Normal and Sport driving modes, as well as a launch control feature and a torque-vectoring differential. Toyota claims the Supra can sprint from zero-to-60 mph in 4.1 seconds on its way to an electronically limited top speed of 155 mph. The car’s curb weight is just shy of 3,400 pounds.

The Supra uses a strut front suspension and a multilink rear suspension with aluminum pieces to save weight, and the setup includes adaptive shocks that can vary their firmness. The electrically assisted steering system incorporates variable power assistance, and it can vary the steering ratio, too. Toyota says the Supra has 50/50 front-to-rear weight distribution. 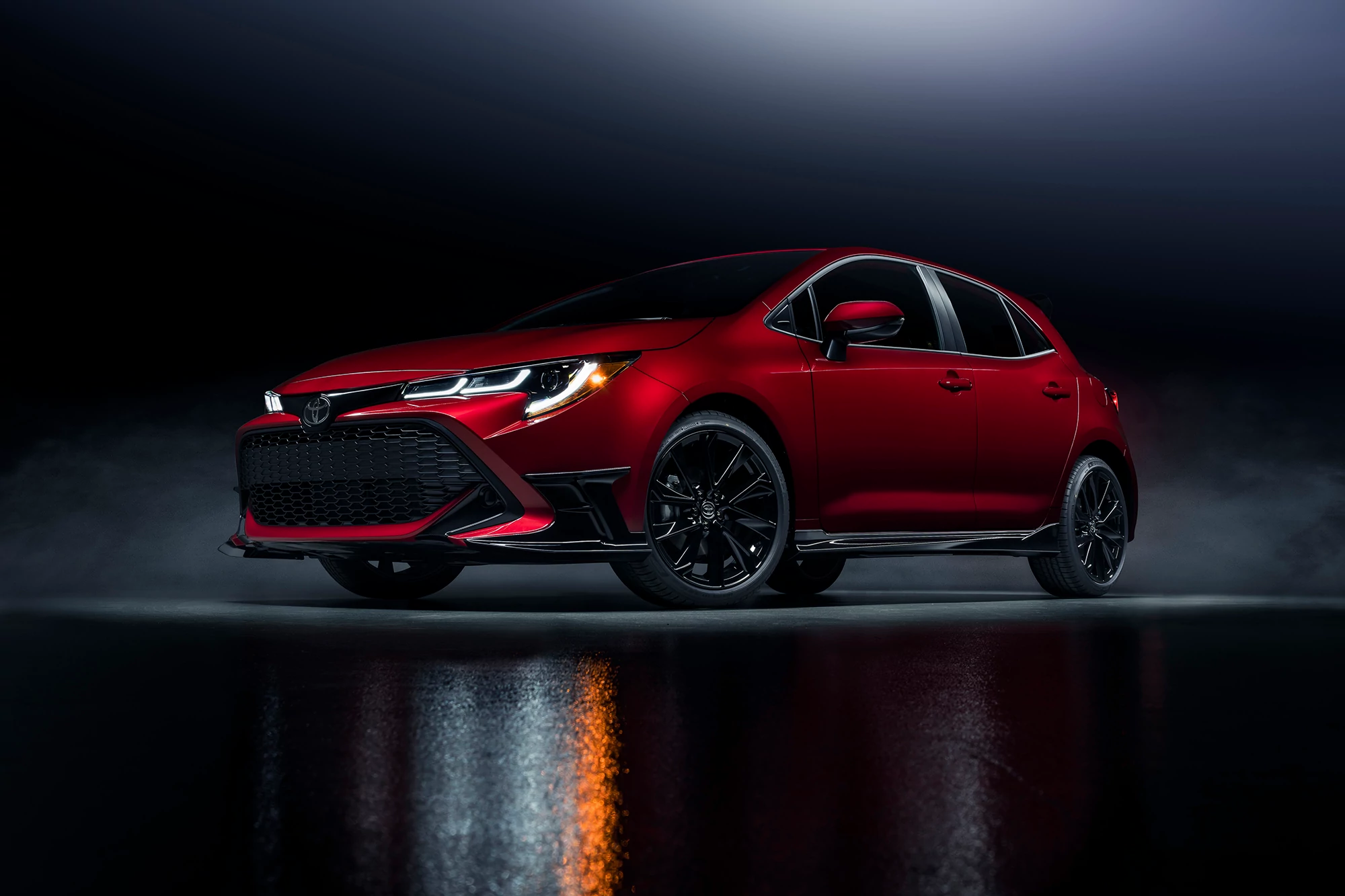 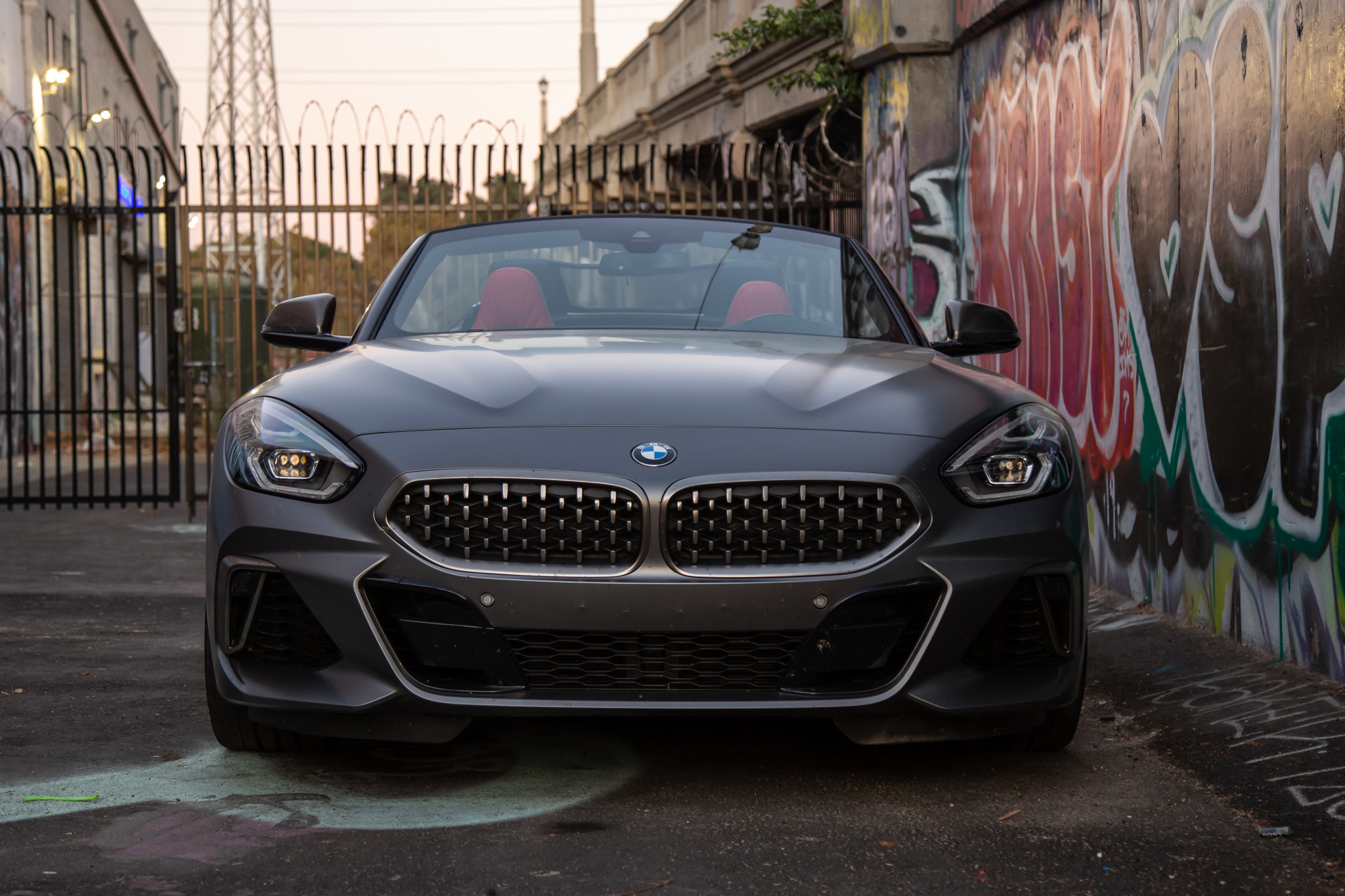 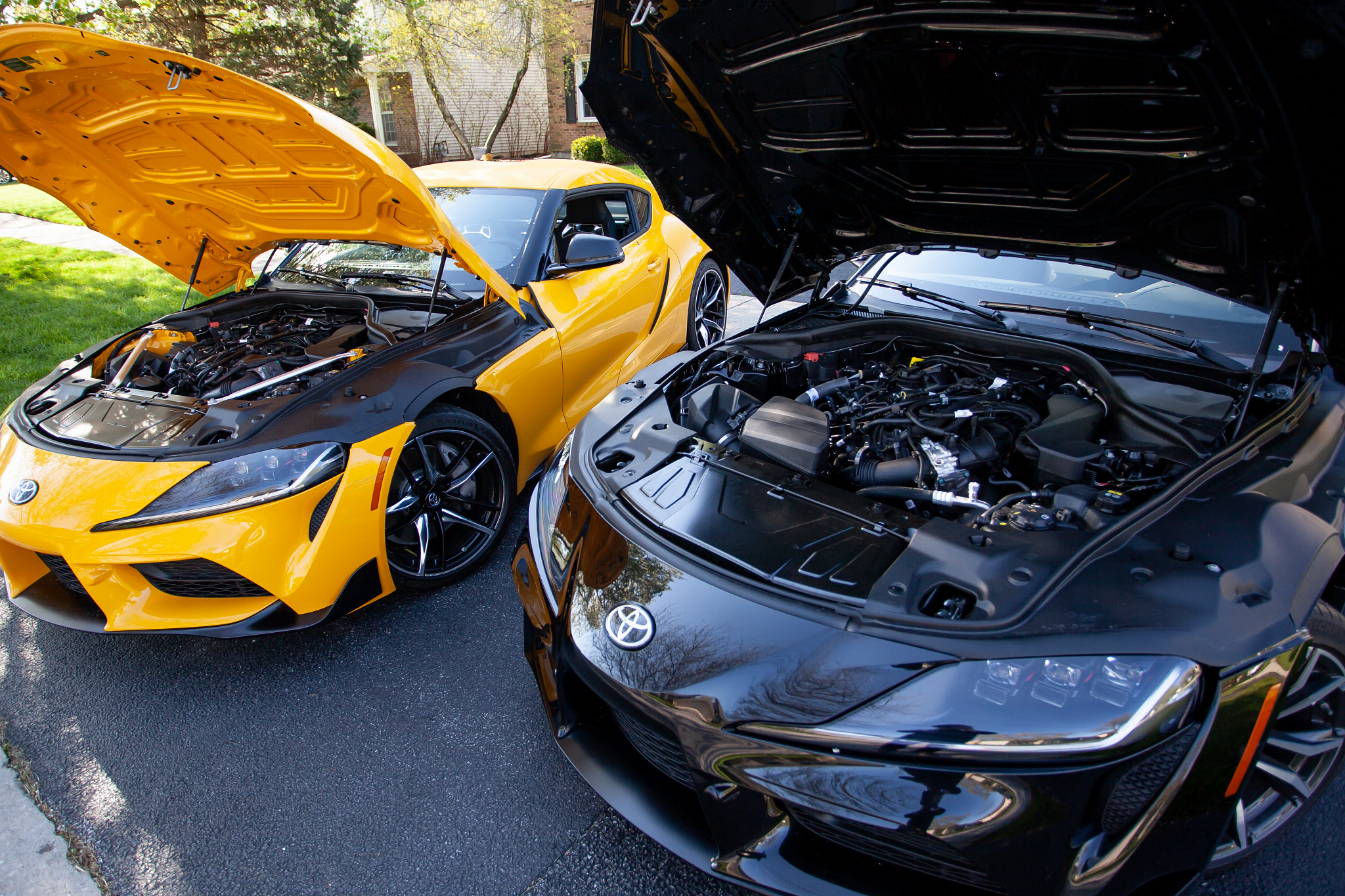