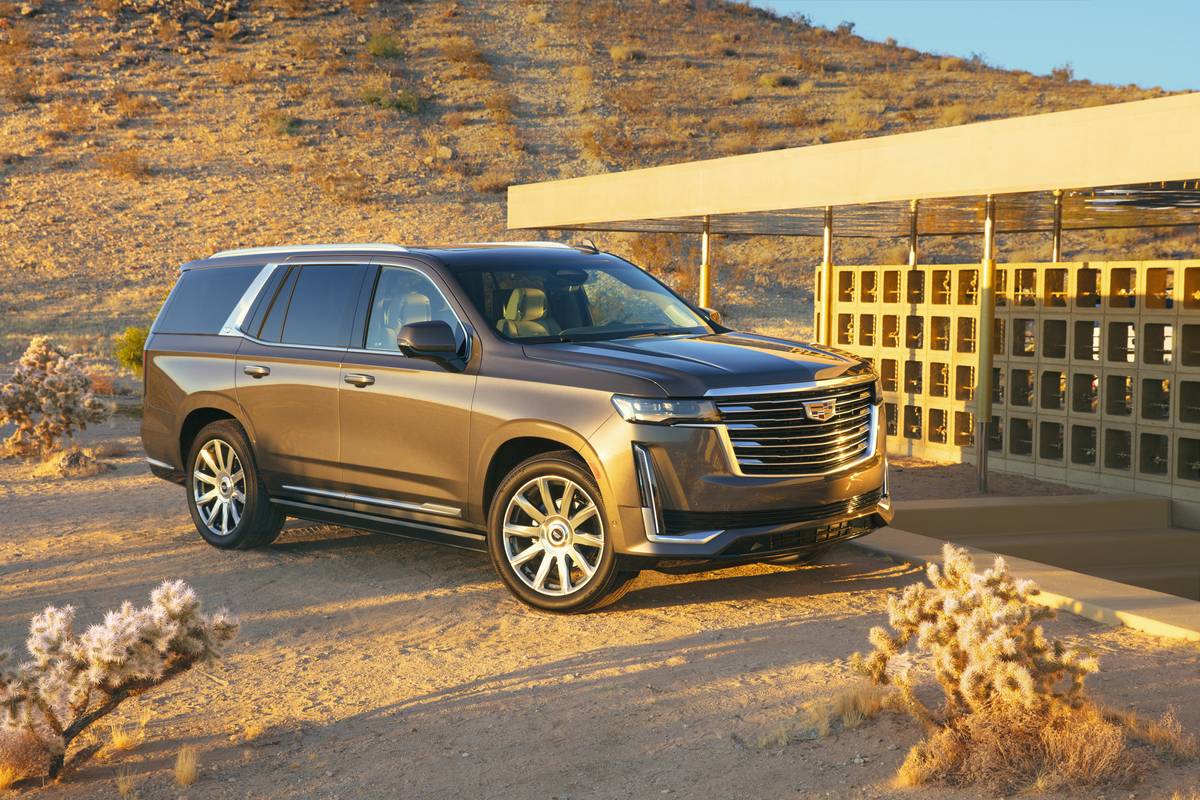 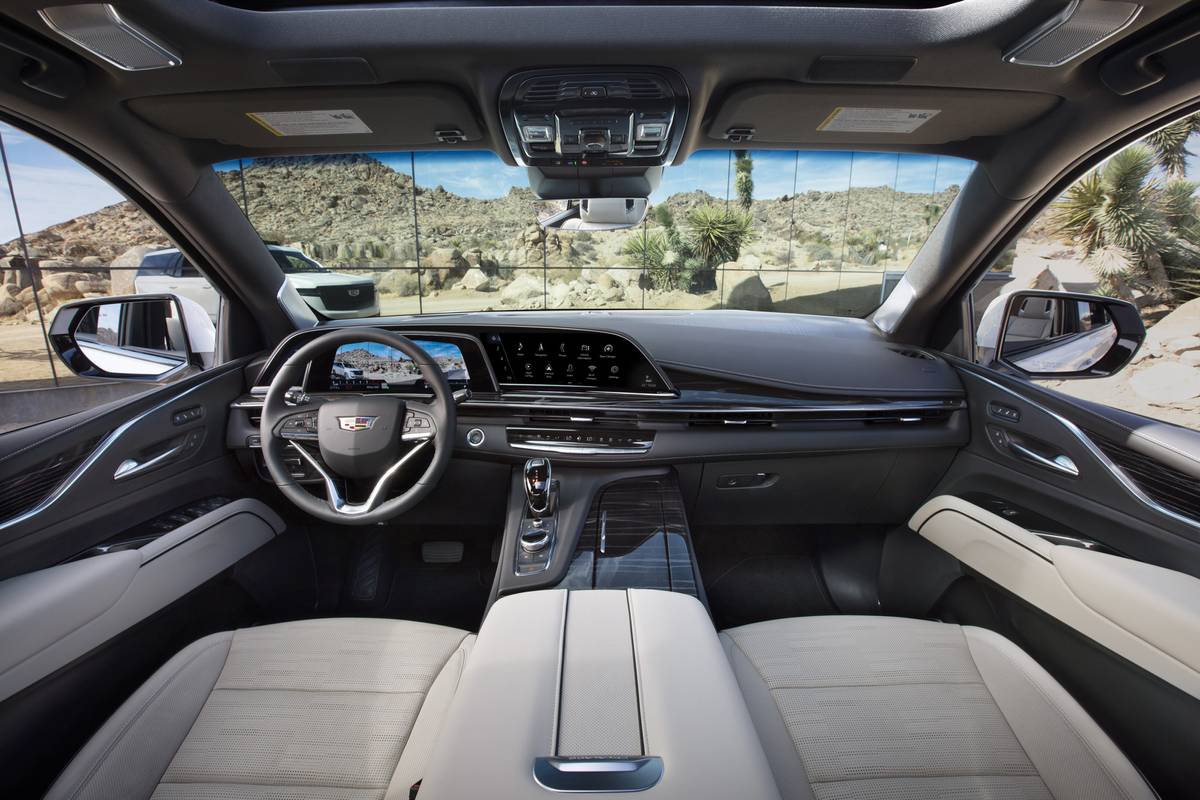 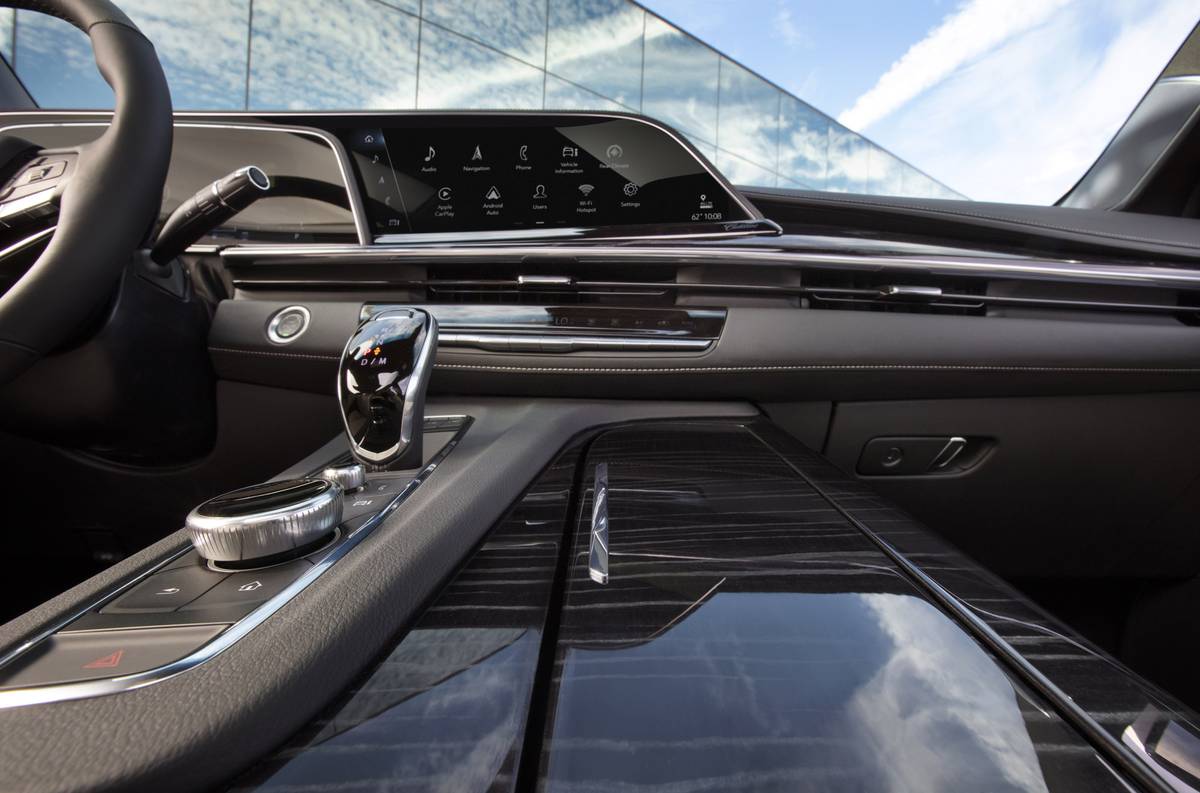 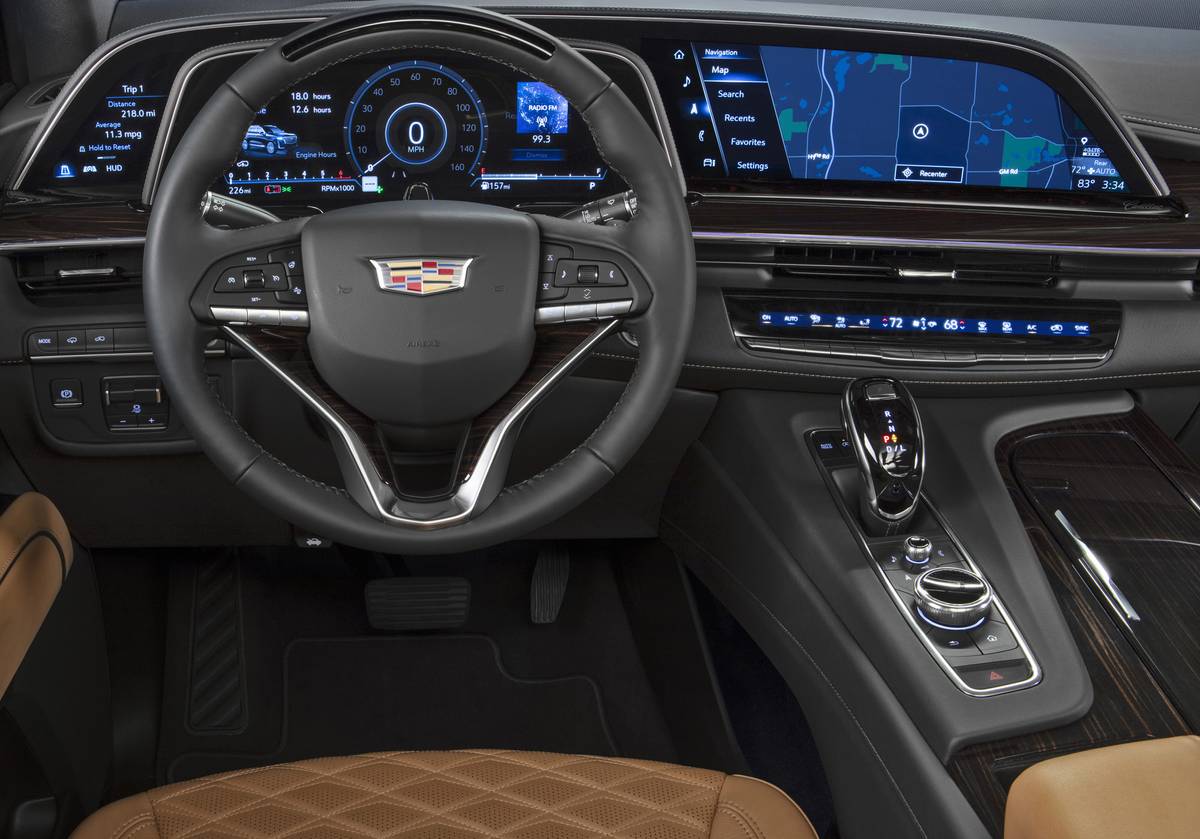 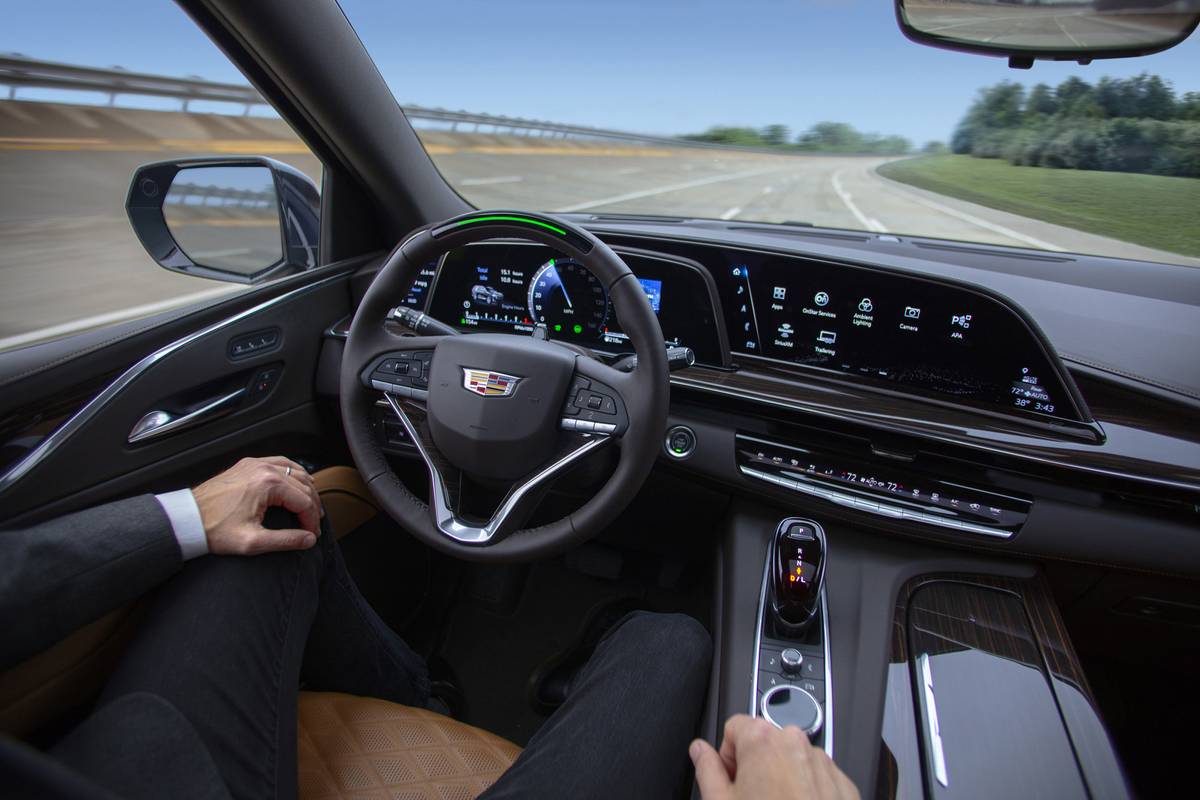 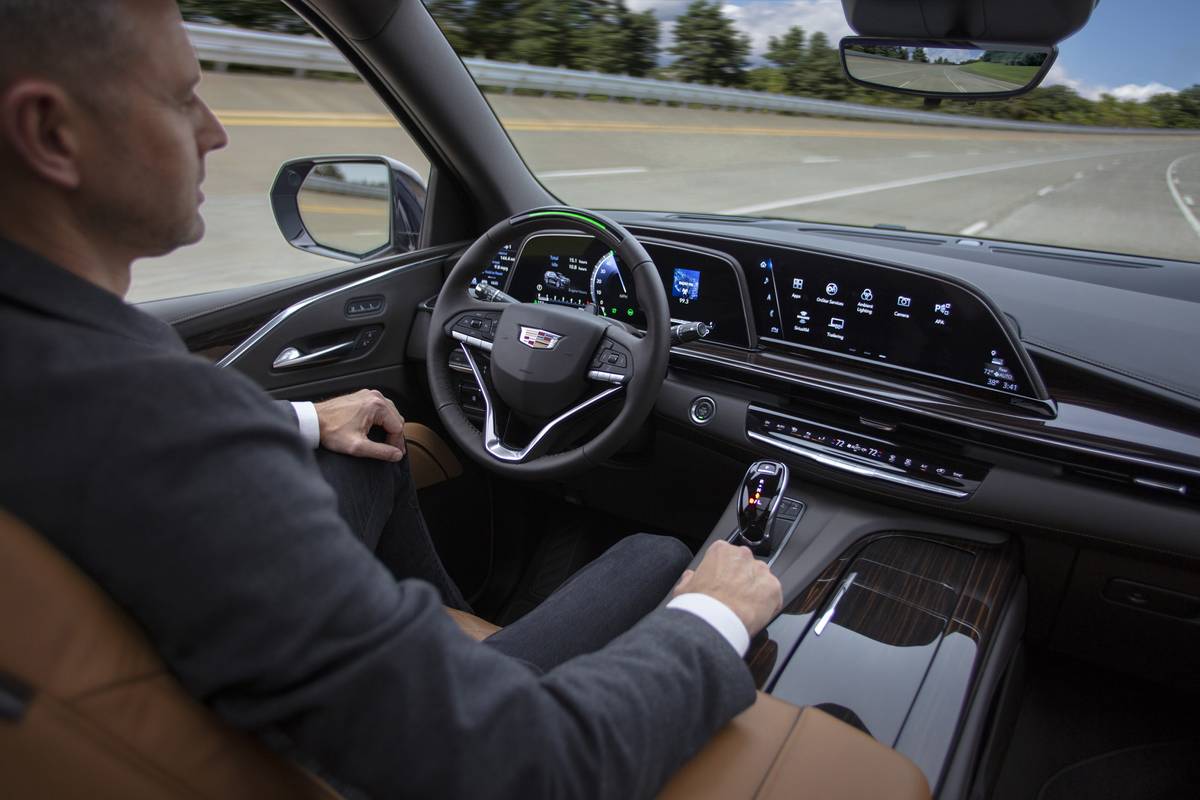 Looks like: The nose from the Escala concept car grafted onto the latest GMC Yukon

Three out of GM’s four U.S. brands offer the company’s big, truck-based SUVs, and all are redesigned for 2021. There’s the Chevrolet Tahoe and Suburban, the GMC Yukon and Yukon XL, and then the third pair, a prestige model that still commands a massive following: the Cadillac Escalade and Escalade ESV. The brand has unveiled the completely redesigned 2021 model at an event tied to the 92nd Academy Awards, so expect to see these things rolling up to future red-carpet events in Los Angeles. Unlike previous versions, which reveled in ostentation and over-the-top bling, the latest Escalades instead aim for a degree of advancement in sophistication and technological leadership that Cadillac has never before put into its big SUV.

The new look of the Escalade is one that builds off of other models in GM’s big-SUV stable. It shares its sleek lines with the Chevrolet and GMC models, with the exception of Cadillac’s blacked-out window trim, but front and rear styling are completely unique. Inspiration for the nose, like those of the CT4 and CT5 sedans, comes from the 2016 Cadillac Escala concept. The grille is deeper but not nearly as garish or ostentatious as on previous Escalades, and the headlights trade their vertical orientation for a wider set meant to emphasize the SUV’s width. The vertical light piping also doubles as daytime running lights and turn indicators up front, while the tall vertical orientation continues in back for the taillights. All exterior lighting in the new Escalade employs LEDs as standard equipment.

Just like the Chevrolet and GMC models, the new Escalade is significantly larger than the one it replaces, with a stretched wheelbase and overall length intended to boost interior volume. Twenty-two-inch wheels are standard across the board. Cadillac will offer two versions: a regular-length model and an extended-length, the Escalade ESV. Like Cadillac’s other products, the Escalade will employ a branched strategy for trim levels: One branch skews toward luxury trimmings with glitzier exterior trim and more chrome, while the other goes sporty, featuring blacked-out trim for a more menacing, monochromatic look with minimal brightwork.

Cadillac will unveil more details about the Escalade ESV at the New York International Auto Show in April, spokeswoman Tara Kuhnen told Cars.com. If the extended-length versions of Chevrolet’s and GMC’s big SUVs — the Suburban and Yukon XL, respectively — are any indication, expect the ESV to eclipse the standard-length Escalade by more than a foot.

Don’t miss out on the latest news, reviews and videos from our in-house experts. Get updates in your inbox.
2021 Cadillac Escalade | Manufacturer image

The star of the show for the Escalade isn’t exterior styling, though — it’s the concept-car-style organic light-emitting diode display that now graces the dashboard. The OLED display comprises a 38-inch, curved three-zone display with double the pixel density of a 4K television. The freestanding, leather-wrapped display consists of a 7.2-inch touchscreen to the driver’s left and 16.9-inch touchscreen to the right — the latter controlling most items — with a 14.2-inch reconfigurable gauge display between. The unit features an illuminated Cadillac badge on backside, viewable from the outside of the SUV, that lights up as you approach with the key.

This is the first instance of a curved OLED this large in a production vehicle. The left panel controls several aspects of the central display, such as modes. Four such modes exist: standard gauges, full-screen navigation, a large night-vision display (when equipped) and augmented reality navigation that overlays arrows for directions and waypoints in a real-time forward video feed, similar to an AR feature offered by Mercedes-Benz. Apart from the tech, the cabin offers eight color themes, with real- and faux-wood veneers among other distinctive materials.

The other bit of technological wizardry comes from two audio systems offered for the Escalade — both from Harman (and, thus, Samsung) subsidiary AKG, a first in a passenger vehicle. The base system is a 19-speaker Studio stereo with surround sound tuned specifically to the Escalade’s trim materials. But the optional system (standard on the Escalade’s Platinum trim) is a 36-speaker Studio Reference system with 3-D surround sound. The system uses three separate amplifiers to drive the speakers, which are just about everywhere. Usage of noise-canceling technology even allows the occupants to raise or lower the volume for the driver versus front-seat passenger.

As with the other big GM SUVs, passenger space and comfort are greatly improved in the new 2021 Escalade. There are 10 more inches of legroom in the third row, which now sits more naturally due to the vehicle’s new-for-2021 independent rear suspension. That also allows for a lower load floor and an 80% boost in cargo room behind the third-row seats, according to GM. Backseat passengers can enjoy an optional new rear-seat entertainment package with two 12.6-inch screens in the front seatbacks.

There’s less difference from the other GM SUVs under the hood, where the Escalade’s engines are no different from what you find in top trim levels of the Tahoe or Yukon. The standard engine is a 6.2-liter gasoline V-8 with the same 420 horsepower and 460 pounds-feet of torque as the optional engine in the Tahoe, Suburban and Yukons. Or shoppers can go for a first-ever diesel engine in the Escalade: GM’s excellent 3.0-liter turbocharged inline-six-cylinder is optional here, too, making 277 hp and 460 pounds-feet of torque. Both engines pair with a standard 10-speed automatic transmission and rear-wheel drive; four-wheel drive is optional.

The suspension and chassis also carry over from the Yukon Denali, with three choices dependent on trim level: coil springs with passive shock absorbers, coil springs with GM’s magnetically controlled adaptive shocks, or air springs with magnetic adaptive shocks. Cadillac engineers admit that the differences in tuning between the Yukon Denali and the Escalade are minor. The air suspension has several height levels — some automatic, some driver-selectable: lower for easier entry and exit, or up to 2 inches higher to clear off-road obstacles. Toward the latter end, the Escalade’s 4WD system even features an off-roading low range. A tow package is also available, and cameras allow up to nine views to aid in trailering, as well as storable trailer profiles and information copied to Cadillac’s smartphone app.

The new 2021 Escalade is set to arrive this summer, with pricing announced closer to its on-sale date.