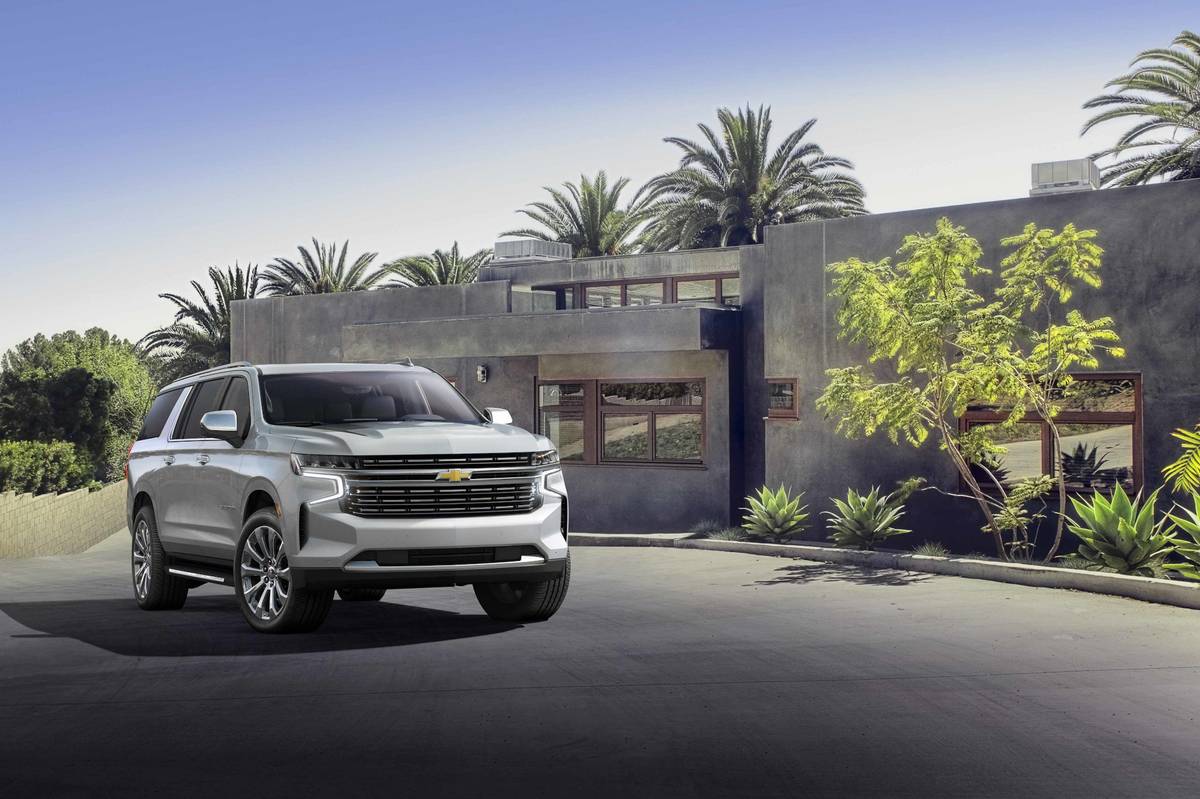 Looks like: A softer, friendlier take on the Silverado pickup truck

One of the longest running, most historic nameplates in the automotive world has just received a major redesign — the 2021 Chevrolet Suburban and shorter-wheelbase 2021 Chevrolet Tahoe have been revealed at an event in Detroit sporting an all-new chassis, updated powertrains, slick new styling, a new turbo-diesel option and significantly more interior space than the trucks have ever featured. Chevy claims that the new Suburban and Tahoe are now the biggest SUVs period — larger than the trucks they replace and bigger than crosstown rivals the Ford Expedition and Expedition Max thanks to a longer wheelbase, new independent rear suspension and considerably different interior packaging.

Related: How Do Car Seats Fit in a 2019 Chevrolet Tahoe?

On the outside, the trucks look like the evolution you might expect. They’re pretty much identical, differing only in the wheelbase and length overall, with the Tahoe featuring a 4.9-inch stretch to its wheelbase over the old model and a 6.7-inch overall length increase, while the Suburban grows 4.1 inches in wheelbase and 1.3 inches overall. The front-end styling is a softer, kinder, less aggressive take on the polarizing look of the 2019 Chevrolet Silverado pickup truck, with a definite family resemblance to the pickups but still differentiated enough to be their own animals.

Six different trim levels will be available for the Suburban and Tahoe, double the 2020 model year’s number, with different style to each of them. The LS and LT are the two lowest levels, featuring standard 18-inch aluminum-alloy wheels, LED headlights and taillights, and nine available colors. But things get more interesting with the RST “street-inspired character” and its blacked-out trim and 22-inch wheels. Stepping up from there is the Z71 off-road model, featuring 20-inch wheels with all-terrain tires, a unique grille, red tow hooks and a revised front bumper for better approach angles off-road. Next is the Premier trim, which is loaded with new infotainment technology, chrome, a dual exhaust (with a gas engine) and 20-inch wheels, while the new range-topping trim is the High Country, with unique branded trim, a bronze-accented grille and 22-inch wheels.

The name of the game for the new Tahoe and Suburban interiors is space. Chevy claims to be trumping Ford in this regard with some impressive numbers thanks to the new platform and interior packaging efforts. How much more space does it have? Chevy says the Tahoe has a whopping 66% increase in cargo room behind the third row, a 30% increase in overall cargo room, and the third row itself has 10.1 inches more legroom than before (more about this in a moment). The Suburban’s overall cargo room behind the first row when everything is folded flat has increased 19 percent. And for the first time ever, thanks to the new interior packaging that has completely redone how the second and third rows are engineered, the second row of both SUVs has fore-and-aft sliding ability of up to approximately 10 inches. (That makes us wonder if the Tahoe’s 10-inch gain in legroom is really more a function of the second-row seat now being able to slide forward; we’ll know more after we’ve examined it in person.)

The entire interior is new, as well, and is distinctively different from the Silverado pickups. It’s loaded with new technology and can feature up to five display screens. There’s the big standard central display screen; a 10-inch screen in the center console; a 4.2-inch color display in the gauge cluster that grows to an 8-inch model on the Premier and High Country; a massive 15-inch head-up display carried over from the Silverado, available on the Premier and standard on the High Country; and two optional 12.6-inch touchscreens that are part of the new rear-seat entertainment package.

Chevrolet claims that the new rear-seat entertainment package is the most advanced in the industry, with two independent screens positioned so that they can be viewed by second- and third-row passengers, and that they can stream independent content, mirror an Android phone’s screen, or even share content from one screen to the other or from the entertainment system to the central navigation system up front. In addition, the new trucks feature a built-in Wi-Fi hot spot with available subscription-based 4G LTE data plans, standard Apple CarPlay and Android Auto capability, multiple USB charging ports and a wireless charging system on all trims except the base LS.

Powering the new Suburban and Tahoe are two familiar powertrains and a newcomer to the party. The standard engine is the venerable 5.3-liter V-8 making 355 horsepower and 383 pounds-feet of torque. It’s standard on all models of both SUVs except the High Country, which comes standard with the bigger 6.2-liter V-8 making 420 hp and 460 pounds-feet of torque. New for 2021 is a Duramax turbo-diesel 3.0-liter inline-six-cylinder engine, pumping out 277 hp and 460 pounds-feet of torque, optional on all models except the Z71 off-road trim. That’s the same torque figure as the big V-8, but it’s all made at a super-low 1,500 rpm versus the 6.2-liter’s output coming at 4,100 rpm.

All engines are mated to a standard 10-speed automatic transmission, with rear-wheel drive being standard on all models except the Z71, which features standard four-wheel drive. A Max Trailering Package is also available that brings a high-capacity radiator and cooling fan, integrated brake controller, and the Chevrolet trailering app with hitch guidance and hitch view features for the camera. It’s not certain, however, that the changes apply to all powertrains, or what the new Tahoe and Suburban’s maximum trailering capacity is. Fuel economy numbers are also not yet known.

The suspension has been given a lot of attention, with all models receiving a new multilink independent rear suspension instead of a solid live axle like previous models, bringing the Suburban and Tahoe in line with the Expedition. In addition, a class-exclusive four-corner adaptive air suspension is available on High Country and Z71 trims. It acts as a load leveler but also adjusts ride height up to 4 inches, lowering height three-quarters of an inch for highway driving, dropping it 2 inches for passenger and cargo loading, or raising it as much as an inch over standard for low-speed off-road situations in 4WD High, and another inch on top of that when switched to 4WD Low. If you want something even more sophisticated, go for the available Magnetic Ride Control suspension that’s standard on the Premier and High Country models and optional on the Z71. It scans and reads road conditions and feedback in real time, and adjusts damper firmness based on terrain, speed and driver input.

Chevy also upgrades the Suburban’s and Tahoe’s trailering technology, stopping short of offering the most advanced system available in the Silverado lineup but still incorporating some of the available systems into the SUVs. Up to nine camera views are available in the Chevy trailering app through the center console, along with rear camera guidelines for easier connection, storable trailer profiles, trailer tire pressure and temperature monitoring, and blind spot detection for trailers.

The new 2021 Chevrolet Tahoe and Suburban go on sale in the middle of 2020, and they will continue to be built at the company’s plant in Arlington, Texas.