Take a look at the new 2023 Dodge Hornet, the first compact SUV from the Dodge brand since the late, unloved Caliber left the showroom a decade ago. If it looks familiar, that’s because you might have already seen the new 2023 Alfa Romeo Tonale, a compact SUV from Dodge’s sibling brand under the big Stellantis umbrella shown to the world a few months ago.

The Hornet is unabashedly based on the Tonale and is even made in the same Italian factory, according to Dodge brand head Tim Kuniskis, who spoke to the media at a private unveiling of the Hornet before it was shown to the public. “We started with what was already a really good car and injected it with Dodge DNA,” he said. “Why reinvent something, or add cost and complexity just to add something like a crease in the sheet metal to make it look different?”

Dodge is looking to go to areas of the super-hot, super-crowded compact crossover class that aren’t currently being played in by competitor brands. Dodge executives lamented that the top three customer wants for this segment according to their research are apparently “value,” “reliability” and “selling price”; “fun to drive” is 15th on this list, and “power and acceleration” ranked way down at 38th.

But Dodge doesn’t do boring or ordinary — this is the brand making 700-plus-horsepower cars and SUVs.

“We’re not a ‘need’ brand,” said Kuniskis, “we’re a ‘want’ brand. Nobody needs a Dodge — we’re the brand our customers want.” Recognizing they had to come to play with something different (perhaps taking some lessons learned from the short-lived rebirth of the Dart), Dodge made a hot-hatch crossover that’s meant to be fun to drive from the base model up to the most modded-out version your mind can cook up using the company’s Direct Connection online aftermarket parts seller. 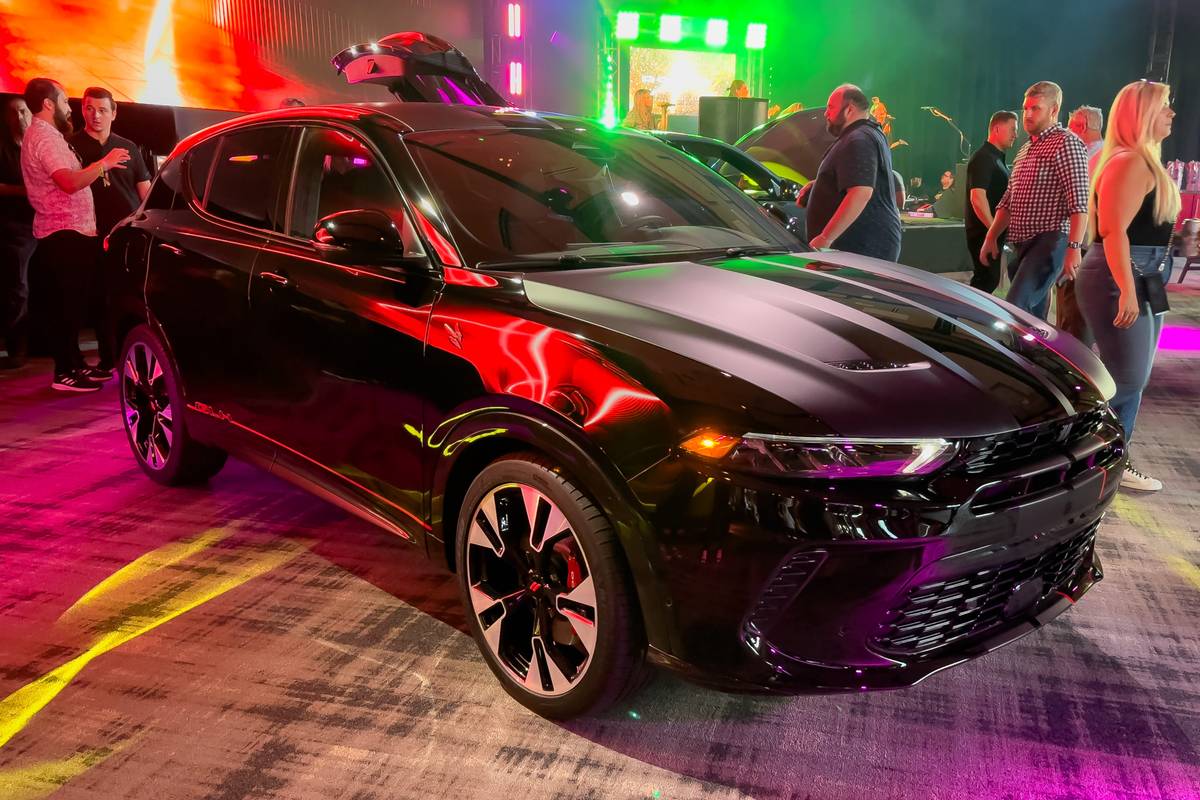 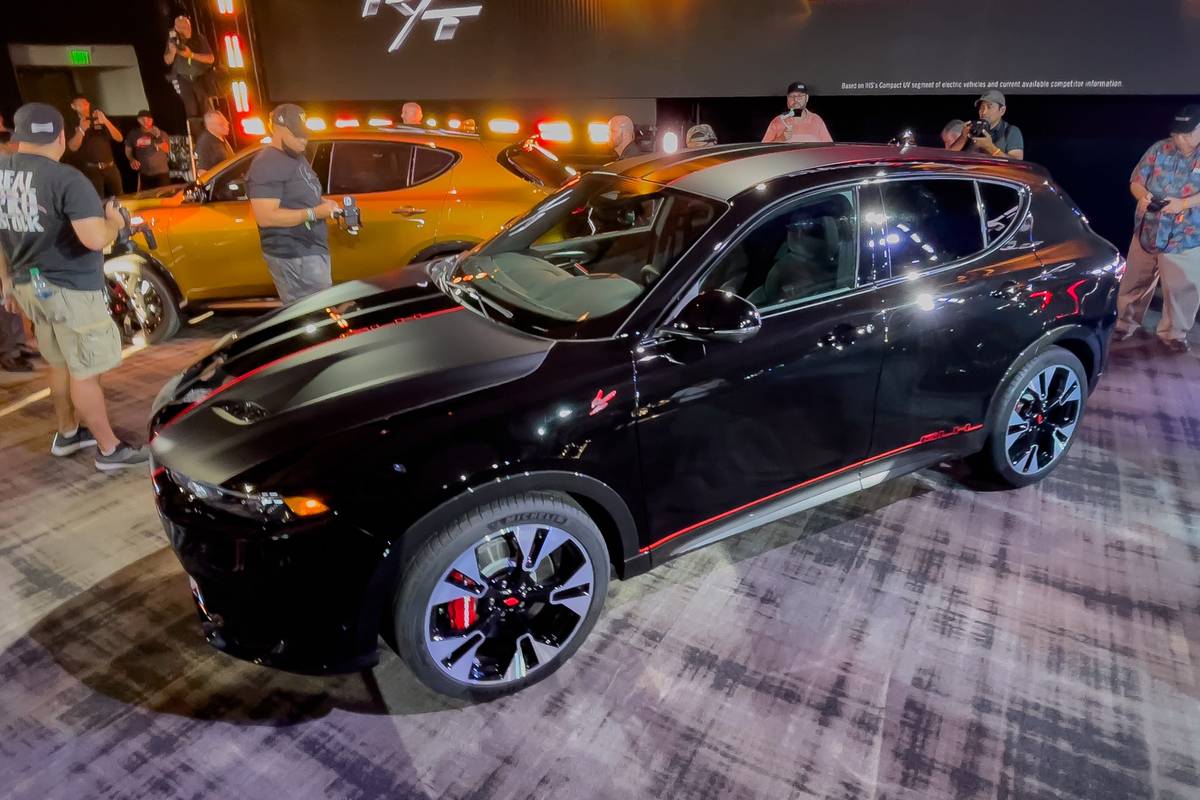 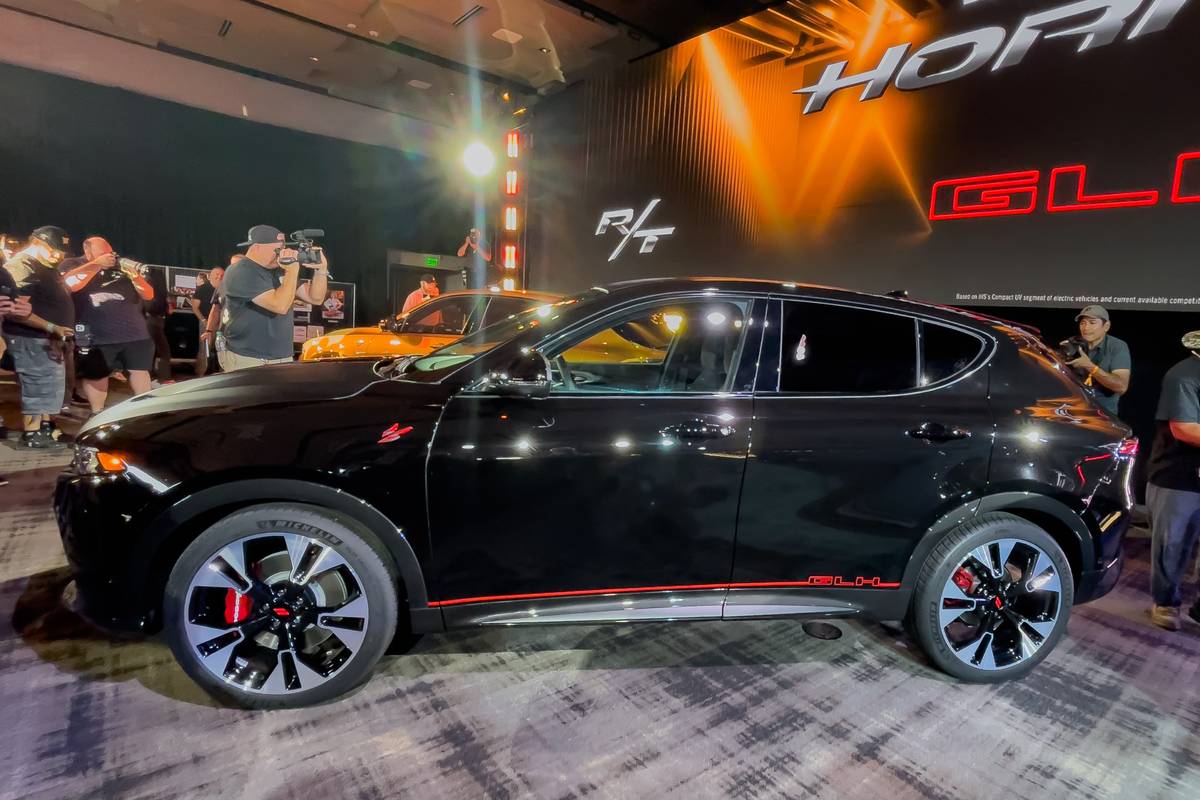 Whether or not you think the new Hornet is different enough from the Alfa Romeo to justify itself is likely going to be a matter of personal preference. It shares a lot of its sheet metal with the Tonale, from the doors to the roof to the window openings, but the front end, hood and taillights are uniquely Dodge. The brand will also offer Blackout and Track Pack packages with larger, black painted wheels as an option that bring the Hornet more in line with Dodge styling instead of Alfa. Whether its badge says Tonale or Hornet, the diminutive crossover is still an attractive little runabout, but it’s not likely going to be its styling that wins over new buyers.

What might win over shoppers who are good with the idea of a crossover but don’t want something boring or slow could be the standard equipment that comes with the Hornet GT for around $30,000: a turbocharged 2.0-liter engine pumping out a minimum of 265 horsepower and 295 pounds-feet of torque (Dodge is trying to squeeze out a bit more before launch), standard all-wheel drive, Koni shock absorbers, a fully independent suspension at all four corners (no cheap twist-beam axles out back) and an electronic limited-slip differential. At that price, it matches up with a Honda CR-V or AWD Toyota RAV4 but handily outguns both in the power department.

It only goes up from there. The more powerful plug-in hybrid powertrain available on the R/T will pump out more than 285 hp and 383 pounds-feet of torque, which is V-8 levels of power and torque while providing what Dodge says is 30 miles of all-electric range. The R/T PHEV will match up well with a RAV4 Prime in terms of price, and while it falls a bit behind the RAV4’s horsepower rating and all-electric range, it offers considerably more torque. It will also bring a dual-stage damper suspension, four-piston Brembo front calipers and the PowerShot feature that boosts power by 25 hp for 15 seconds, knocking a full second off the standard 0-60 mph time. 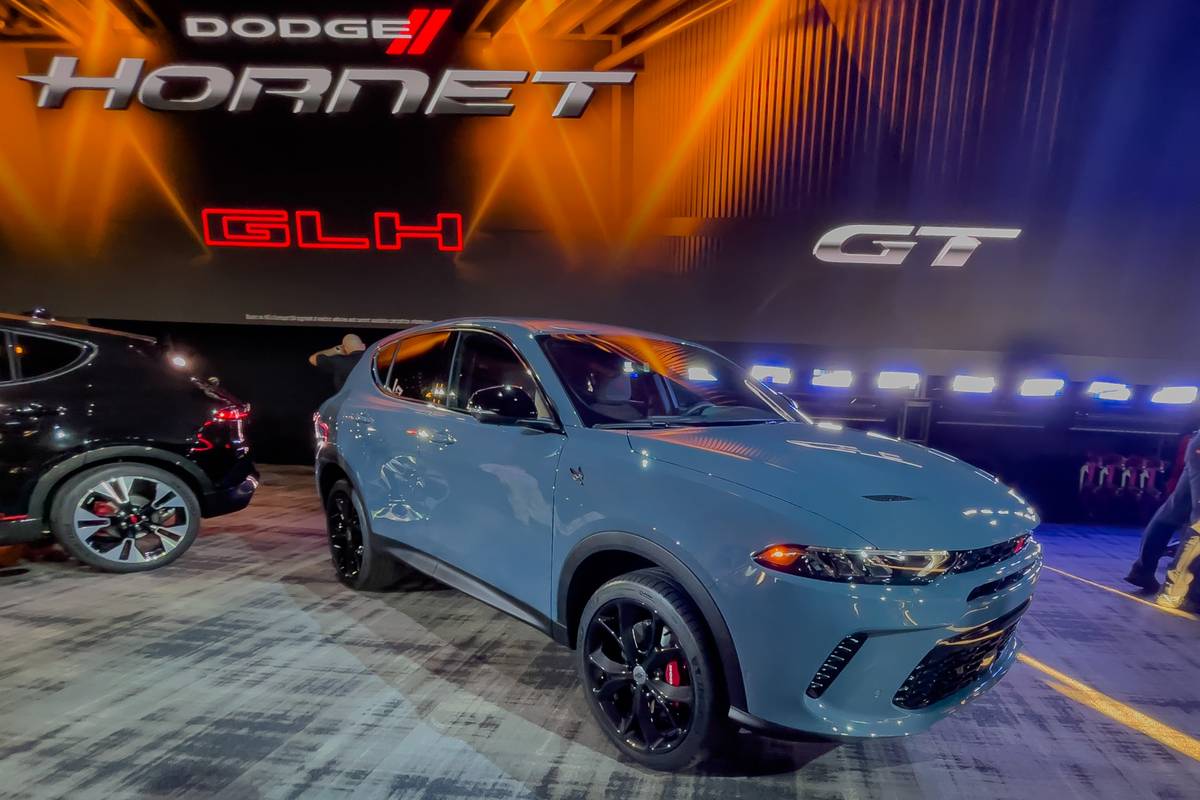 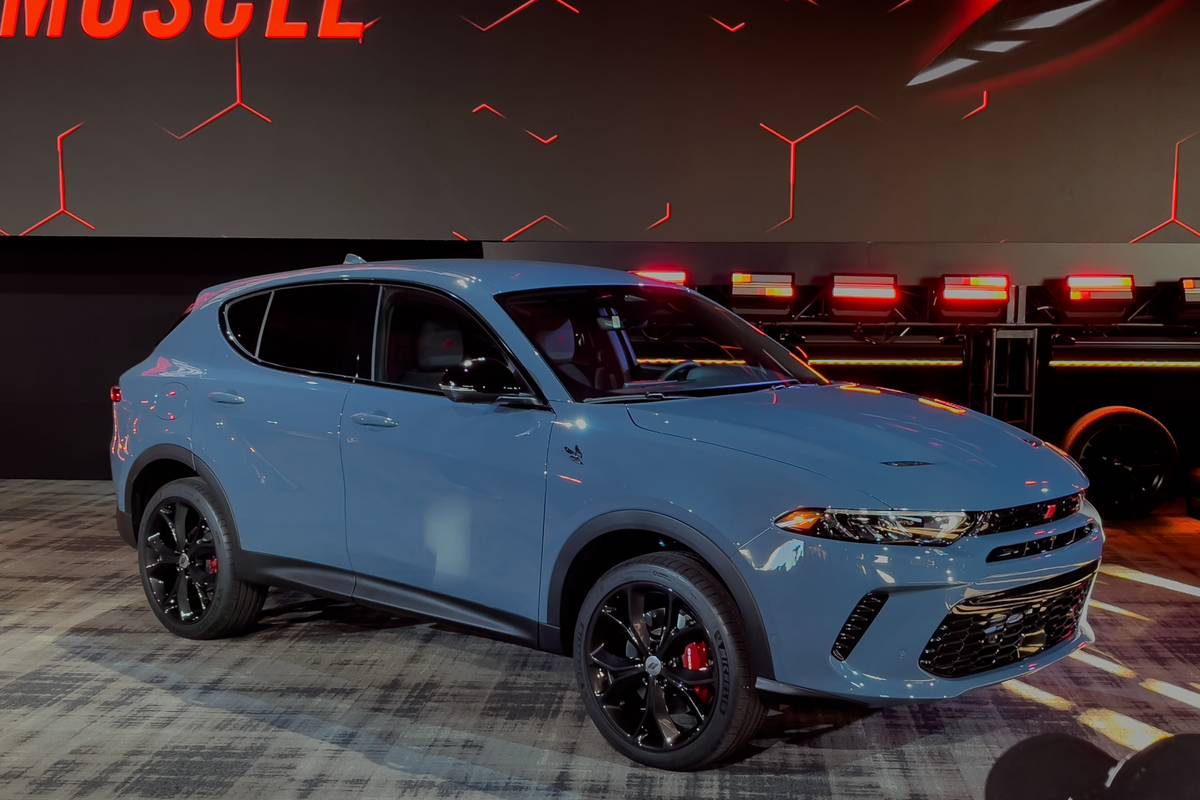 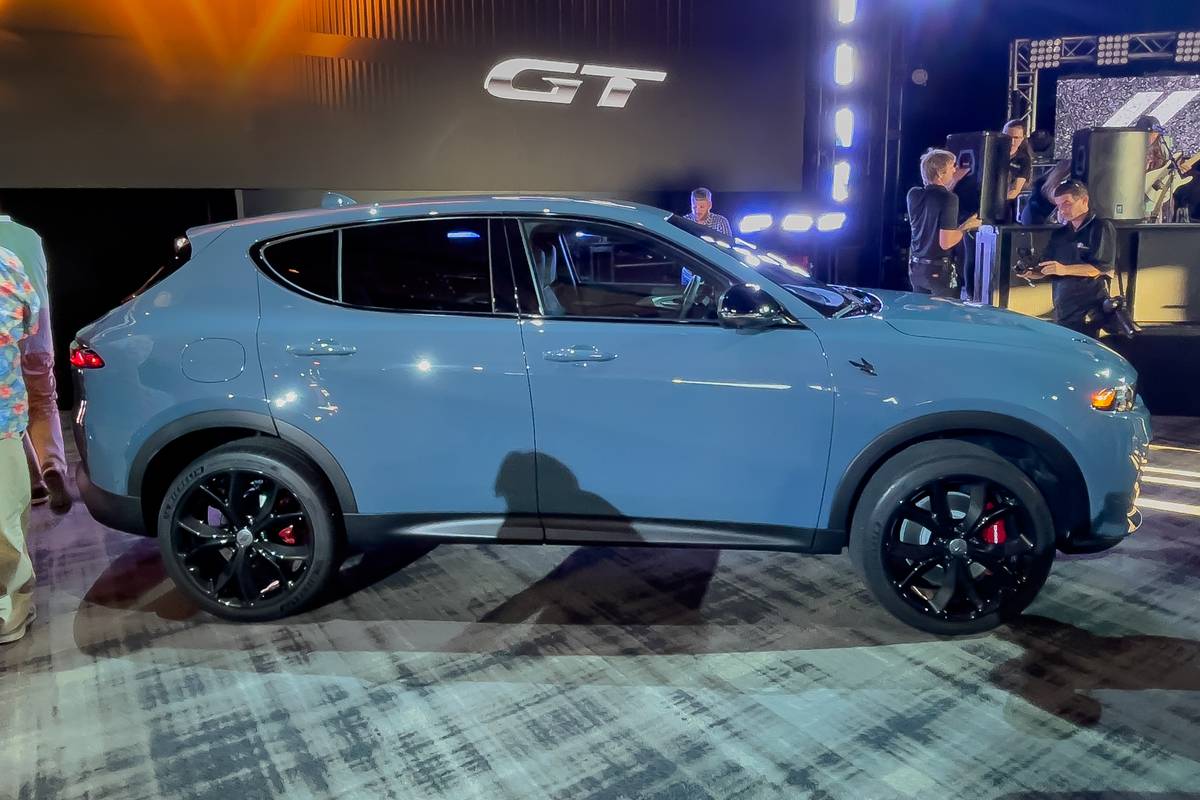 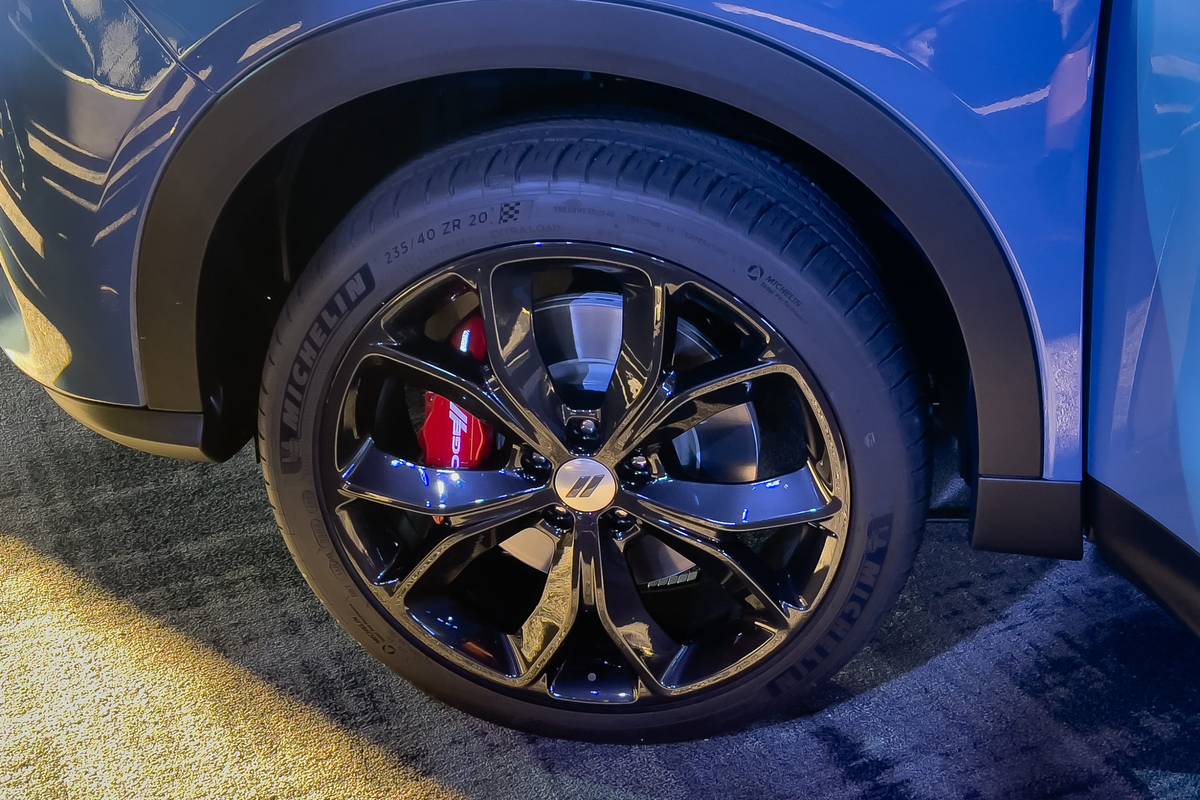 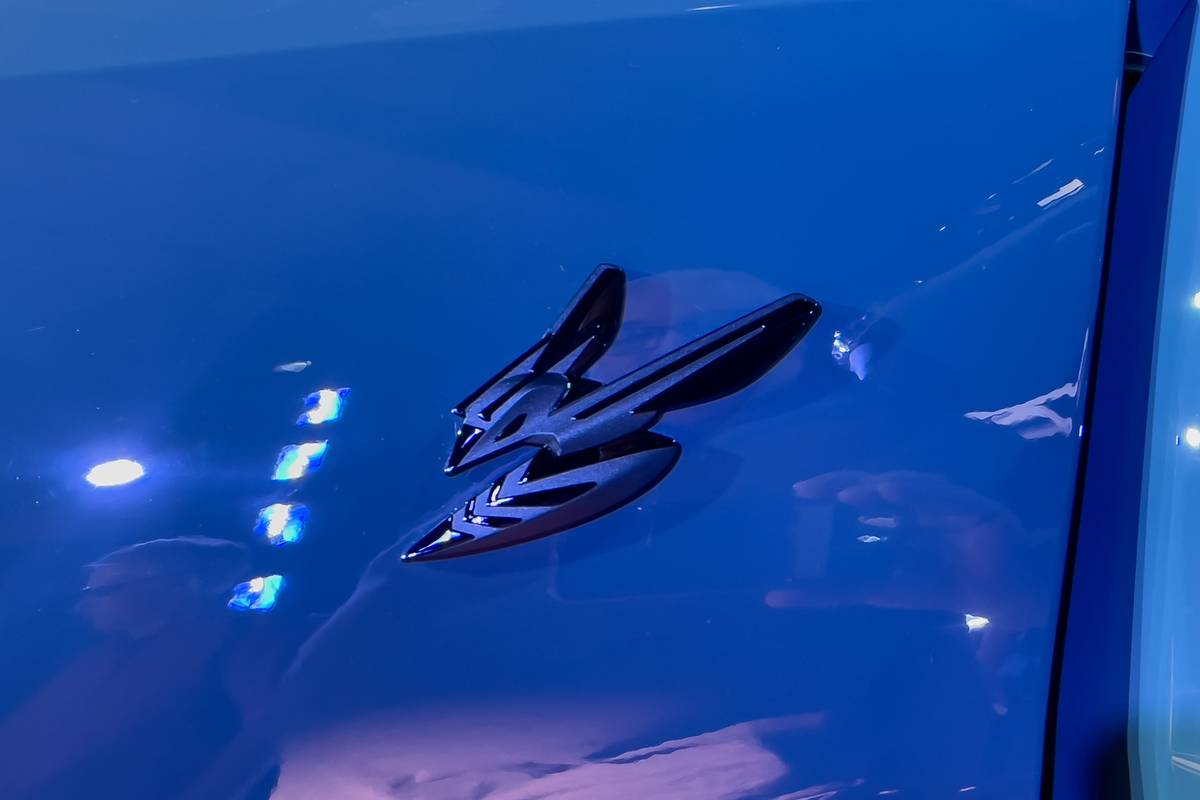 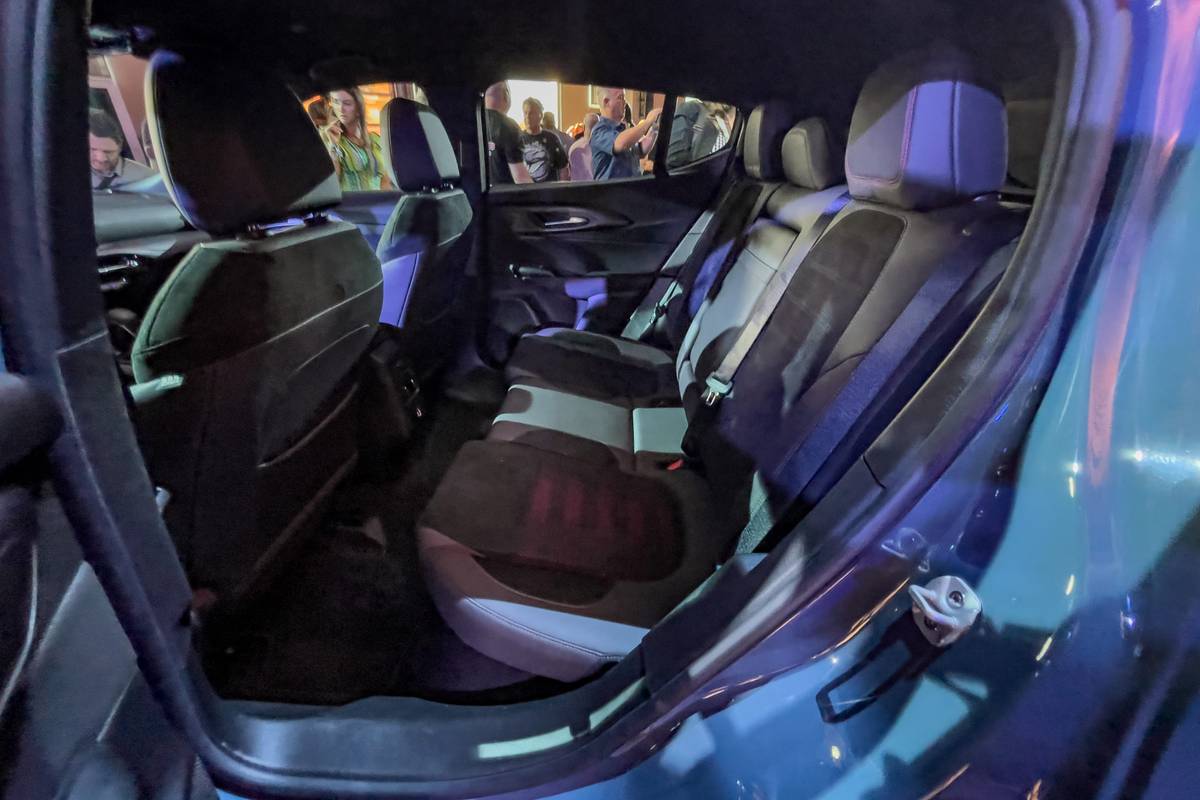 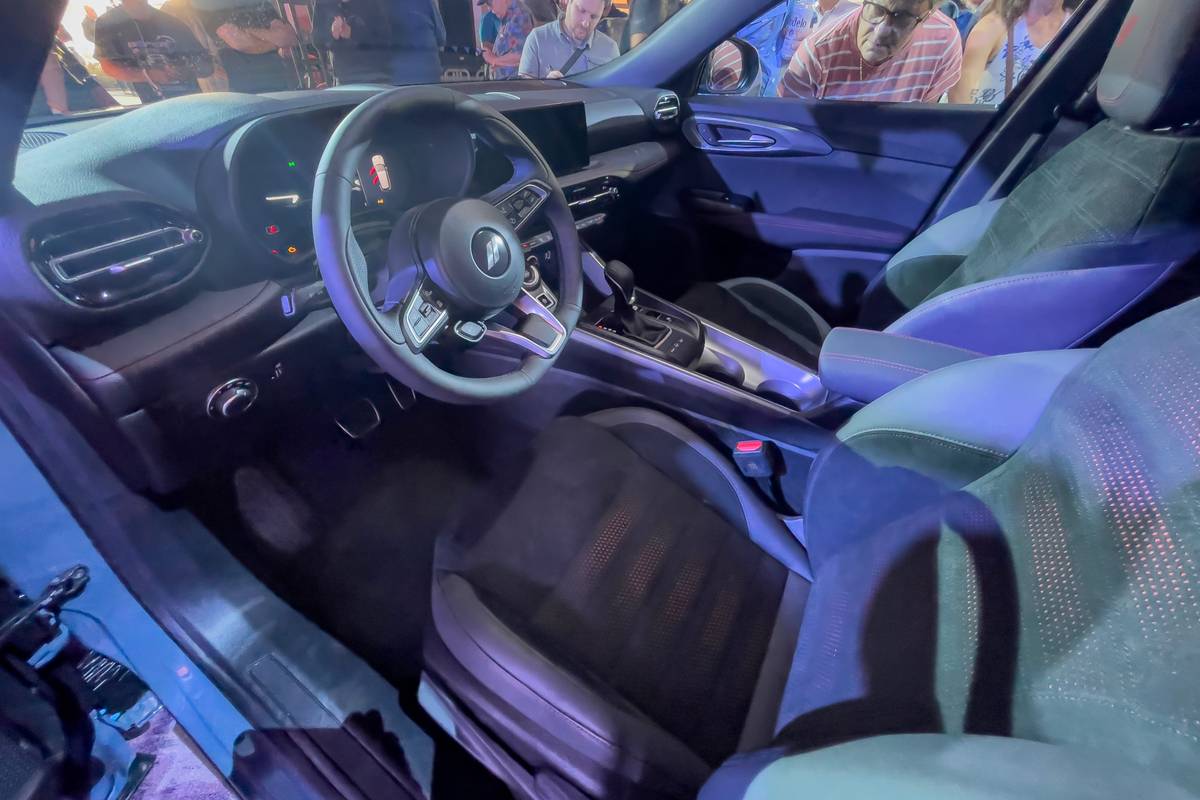 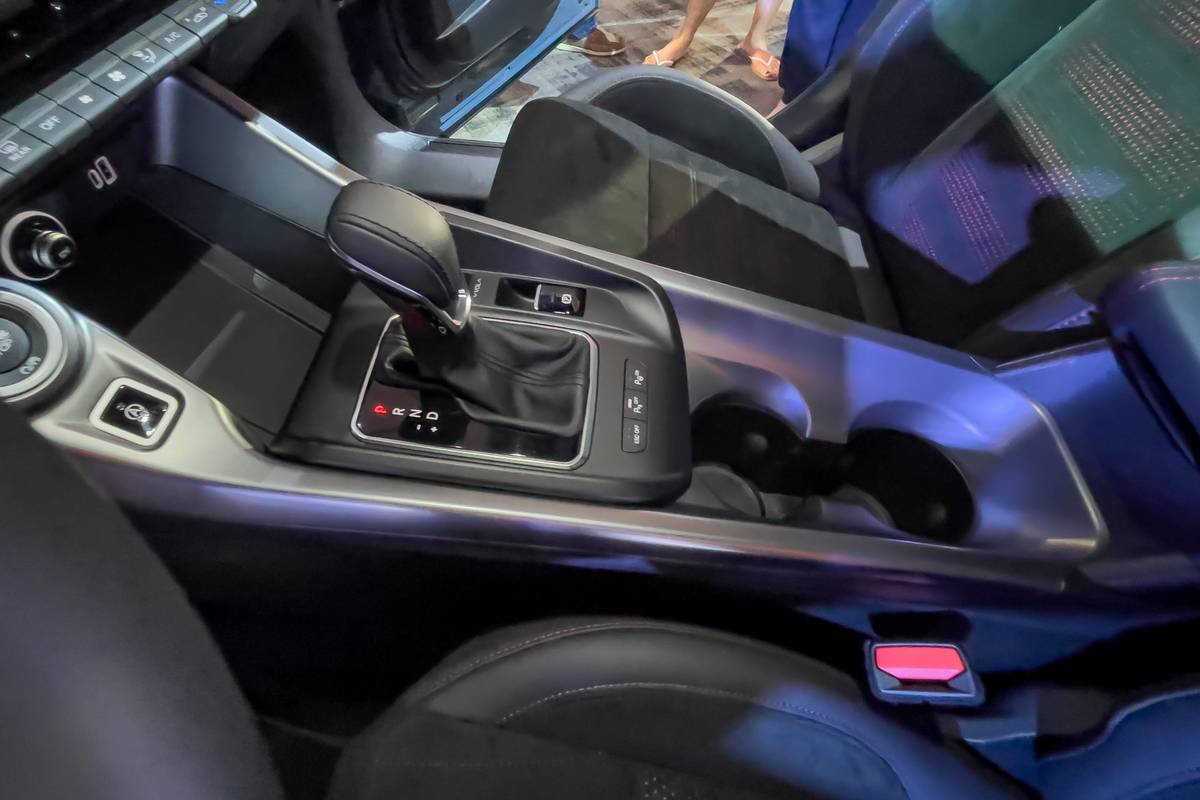 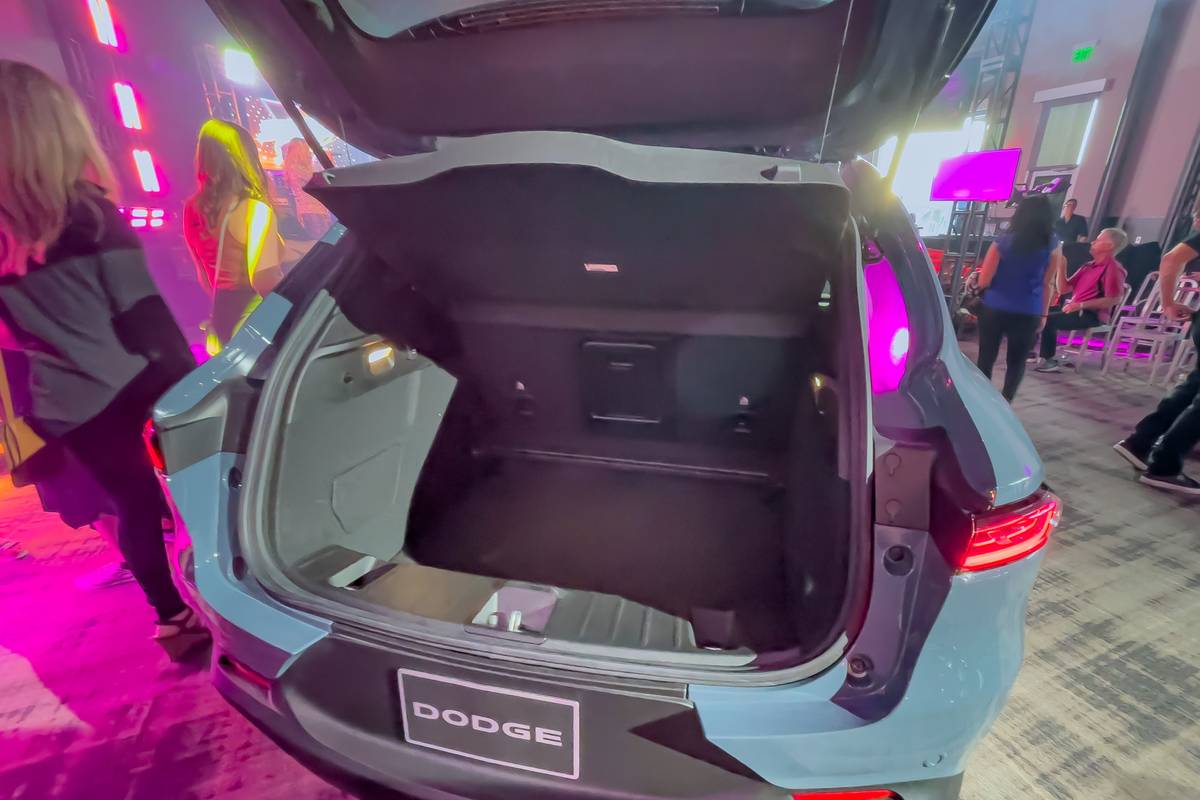 The new Hornet looks to be the enthusiast’s choice in the compact crossover class, the thing to buy when family needs necessitate four doors and cargo room, but mom and dad don’t want to give up the thrill of driving something fun. A lot of its equipment and powertrain details are shared with the Tonale, but you’ll have to spend thousands more on the Alfa to get the same level of kit. Dodge isn’t wrong in calling it unique in the segment: In order to get truly sporty, quick and capable crossovers, shoppers usually have to go to luxury brands like Alfa Romeo, Audi, BMW, Jaguar or Mercedes-Benz. Mass-market brands like Chevrolet, Ford, Honda, Nissan and Toyota just don’t make anything truly “fun to drive” in this category — the Hyundai Kona N is the exception, not the rule.

Compact Is the Right Word

One area where the Hornet might have some challenges is in interior space — it feels like it’s on the small side of the category, with tight environs in both the first and second rows of seats. There’s not a lot of width for front-seat occupants, and the steering wheel is not centered on the driver — it’s inboard an inch or two, enough to be noticeable. The second row is tight on legroom, especially when compared to some competitors like the Nissan Rogue or Volkswagen Tiguan, which have comparably spacious backseat legroom. 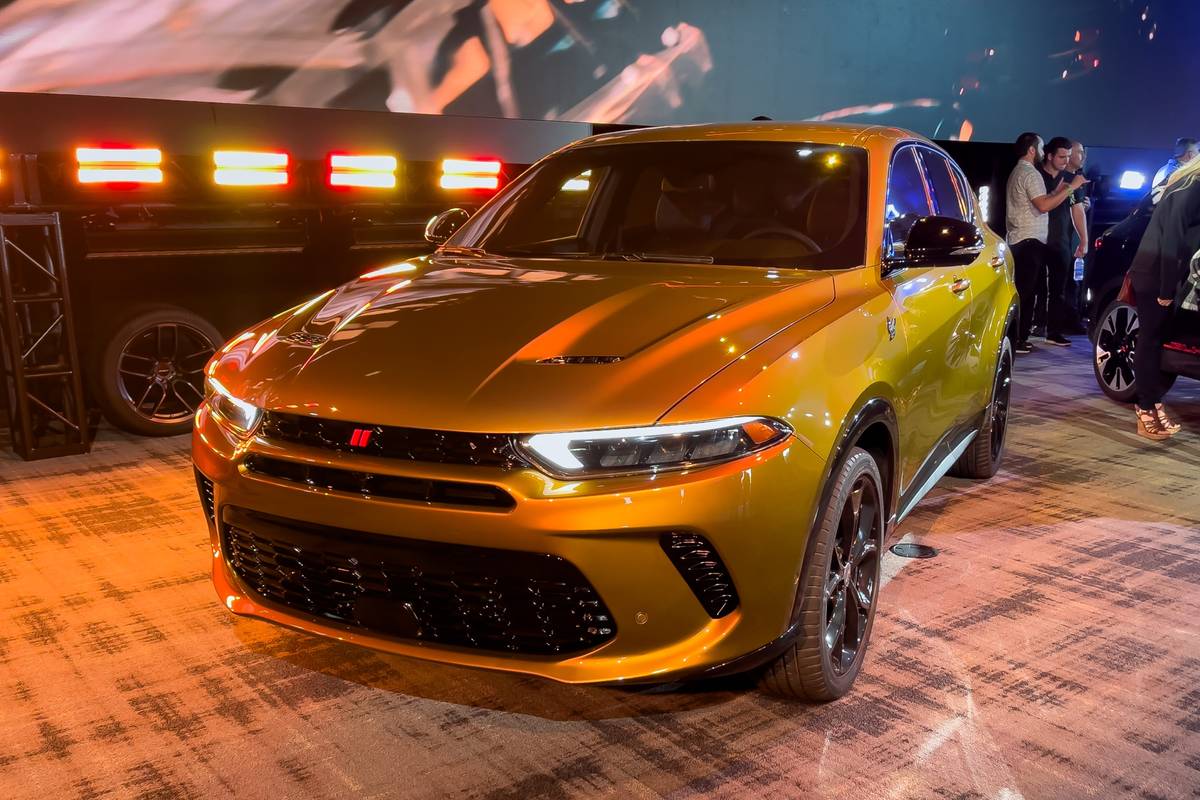 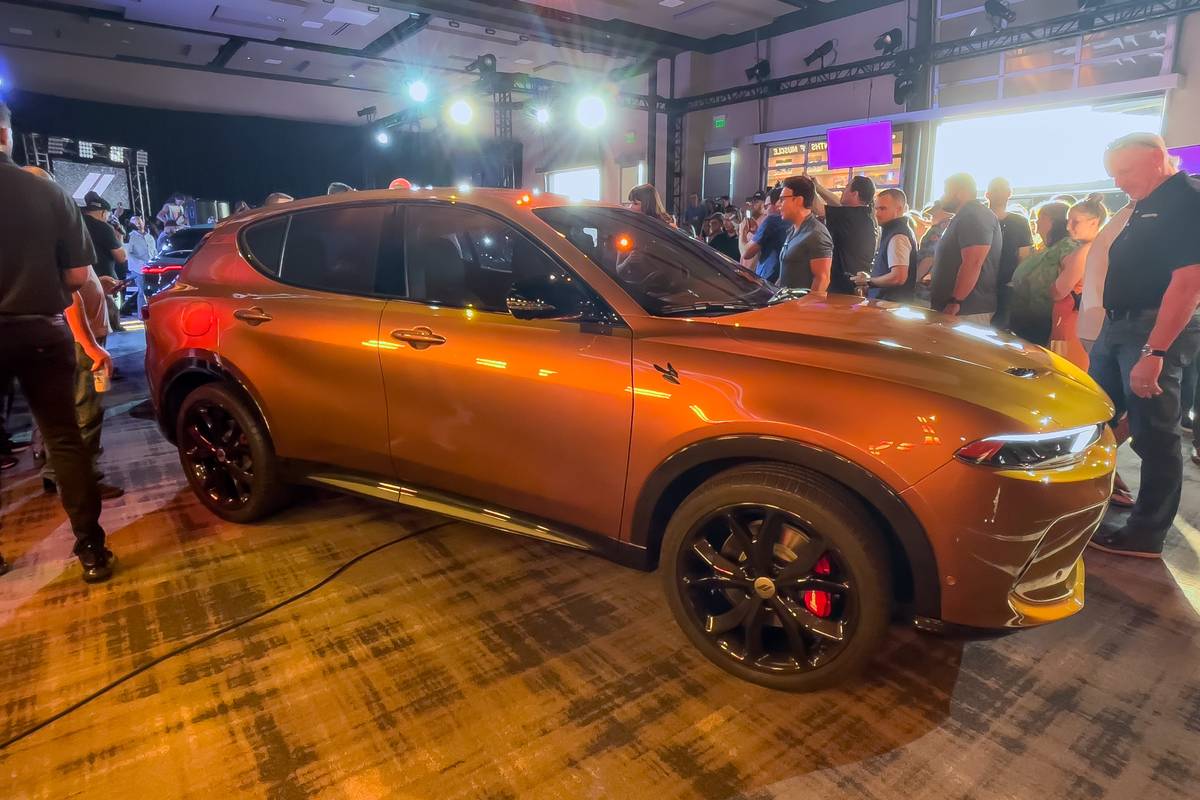 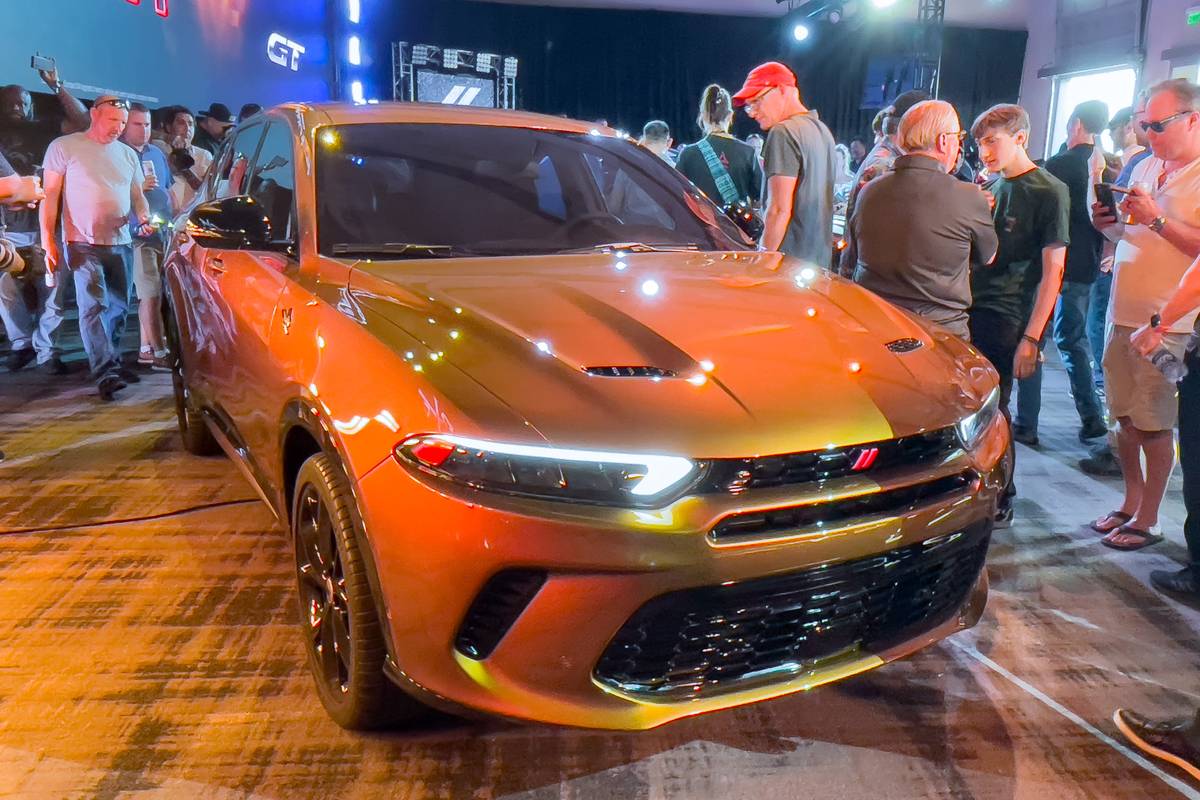 What the Hornet does have, even in the early prototypes I sat in, is quality materials, smart design that combines both real buttons and touchscreen controls, a state-of-the-art Uconnect multimedia system update that secures its status as a benchmark system and slick details like colored stitching even in base models. The interior also differs a bit from the Tonale — perhaps more than the exterior does — but the layout is still the same, including the position and style of multimedia screen that looks plonked down in the middle of the dashboard as an afterthought.

So, will the Hornet work? Will a cheaper, Alfa Romeo-based, mass-market crossover with a very specific mission find buyers in such a crowded field? I’d say it has a good chance — Dodge knows its customers quite well and tailors its offerings to appeal to them with excellent effect. This comes after years of trying to be a main player in established fields with conventional products that never quite caught on regardless of how good they might have been. Aiming for the white space where established players aren’t participating is certainly worth trying.

On paper and in the sheet metal, the Hornet looks like it has the enthusiast goods — but we’ll have to see how it drives to judge if it’s worth putting on a consideration list.