Yesterday, we introduced the four high-mileage commuter cars for our latest mileage challenge, which comprised about 300 miles of highways southwest of Chicago. Three of the four — the Pontiac G5, Toyota Corolla and Ford Focus — had trip computers with mpg readouts; the fourth, a Honda Civic, did not. We started the drive with full tanks of gas, logged mileage on the trip computers and calculated it again by filling up at the end of the day.

As noted yesterday, we filled all four cars at one station to begin the day and another to end it, something that experts have noted could introduce slight variances due to pump calibrations. The variances should at least be consistent, however, as we filled each car from the same pump at each station. Onboard mpg readouts, which measure fuel-injector pulses (and are arguably more accurate for short-term tracking like this) indicate a closer race: The Corolla’s 34.9 mpg effectively mirrors its 35-mpg highway rating, while the G5 and Focus returned just over 33 mpg — less of a shortfall for the 35-mpg Focus than for the 37-mpg G5.

Given our fuel-friendly speeds, why did three of the four cars underperform — especially given that, in worse conditions, we outpaced the highway ratings of a Nissan Rogue and Subaru WRX? Our route was free of major elevation changes, but there were some hefty crosswinds: We drove southwest and doubled back northeast, and The Weather Channel’s weather.com pegged the northwester along our route at anywhere from 14 to 23 mph.

Turbulent air can have an effect on mileage, especially at highway speeds. According to the EPA, crosswinds introduce lateral rolling-resistance to the tires — think of the steering corrections needed to maintain a straight line — and they increase aerodynamic drag in directions a car isn’t designed to handle, both of which affect gas mileage.

Greg Fadler, an aerodynamics engineer at GM, expounded: A 14-mph crosswind on a car traveling at 55 mph can affect its drag coefficient enough to increase fuel consumption 13 percent, he said. Conversely, any sort of tailwind can help — and it doesn’t need to be coming directly from 6 o’clock. “Use a full 360-degree analogy, assuming that your nose is at 90 degrees,” Fadler said. “Zero to 180 degrees is oncoming wind, and anything from 180 to 360 degrees is going to help you.”

Given our there-and-back route, a constant crosswind from the same direction should have a zero net effect, Fadler said. The wind gusted unevenly all day — but whatever its effects, the Corolla somehow managed to fare just fine.

Another phenomenon: Despite all four cars driving the same route, the G5’s odometer read 306 total miles. The others registered anywhere between 298 and 300. Asked about the variance, David DeFrain, GM’s director of infotainment telematics, said it shouldn’t be due to wheel size — the G5 XFE has 15-inchers — as the company calibrates its odometers to match a car’s specific wheels. Spokesman Tom Read added that GM tested three G5s with 15-inch wheels for odometer accuracy and found mileage discrepancies of about 1 percent, at most. Read said GM would look further at the specific hardware in our test car.

Some final food for thought: It’s possible that automatic transmissions may allow for more consistent results. Even the seasoned stick-shifters among us need a few minutes to learn the unique progressions for the clutch and gas pedal in an unfamiliar car, and over-revving the engine to ease into first or missing the timing on a downshift rev-match can take bites out of mileage. But at most, those bites were slight: The vast majority of the time in the G5 and Focus was spent in fifth gear at high speeds, a task any driver could turn into high mileage. And the well-performing WRX in our first challenge, also a stick shift, didn’t seem susceptible to any of this.

However you slice it, the G5 and Focus fell significantly short of their highway estimates. The Civic came close, but the Corolla won the day: It matched the EPA highway ratings on its mpg readout and beat them at the pump calculations. Advantage, Toyota. Stay tuned for some driving impressions and more postgame analysis. 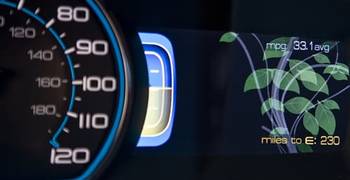 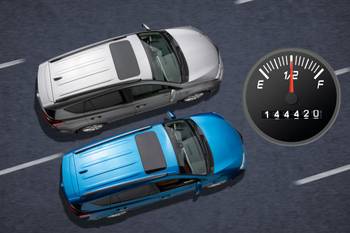 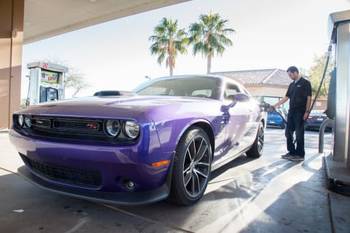 Which V-8 Muscle Car Gets the Best Mileage?