In August, Ford unveiled five Bronco and Bronco Sport “adventure concepts” to show off the Bronco two- and four-door and Bronco Sport’s collective abilities to wear an impressive amount of accessories, enabling your future Bronco to be customized for your specific needs. Today, Ford revealed yet another adventurous concept: the Bronco Overland.

Based on the Bronco Badlands four-door and powered by a turbocharged 2.3-liter EcoBoost four-cylinder engine paired with a seven-speed manual transmission (heralded by Ford as a “class exclusive” in that competitors have manuals with fewer gears), the Bronco Overland’s mission is to take you far from the beaten path — and let you stay there for a while. 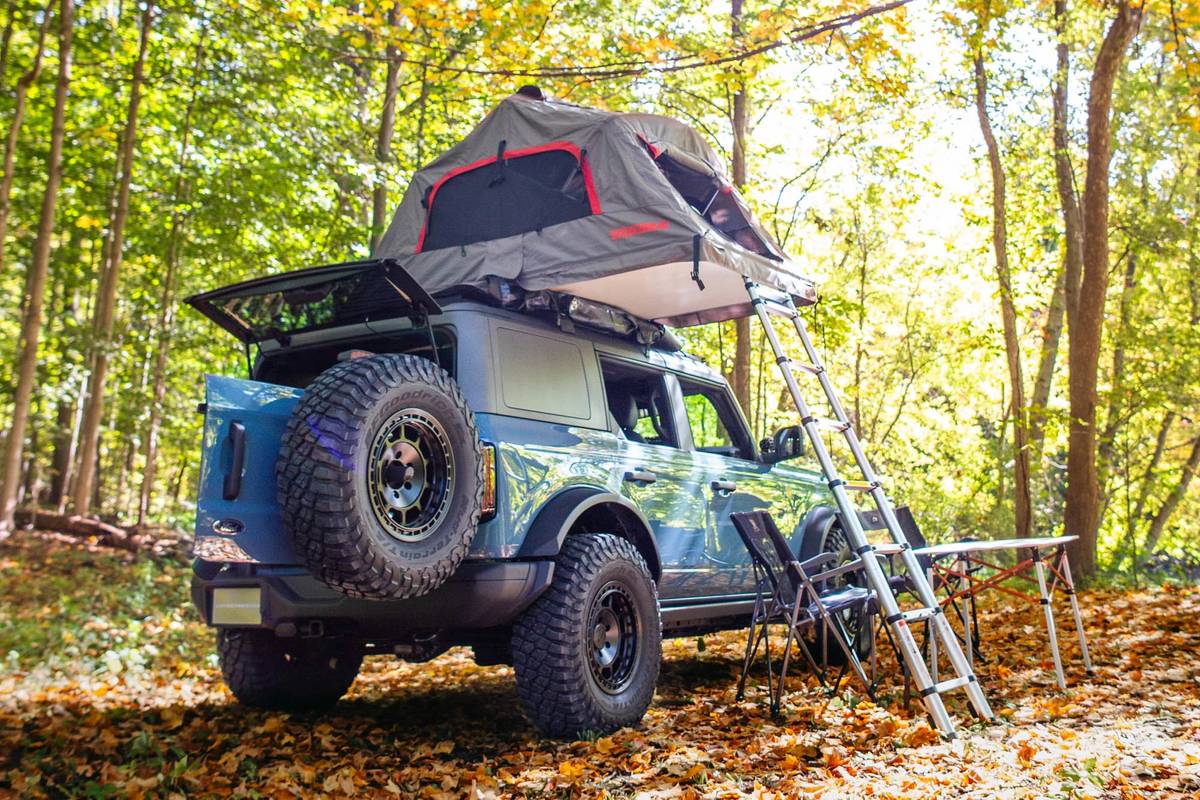 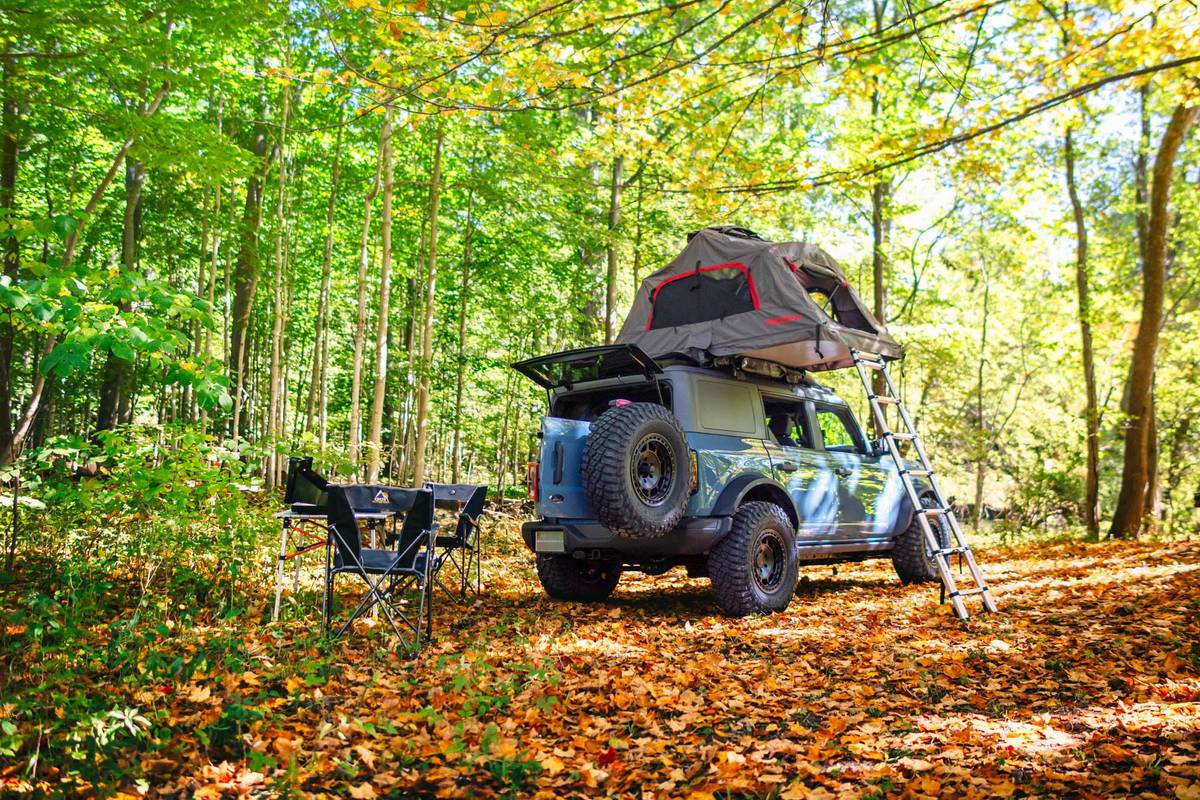 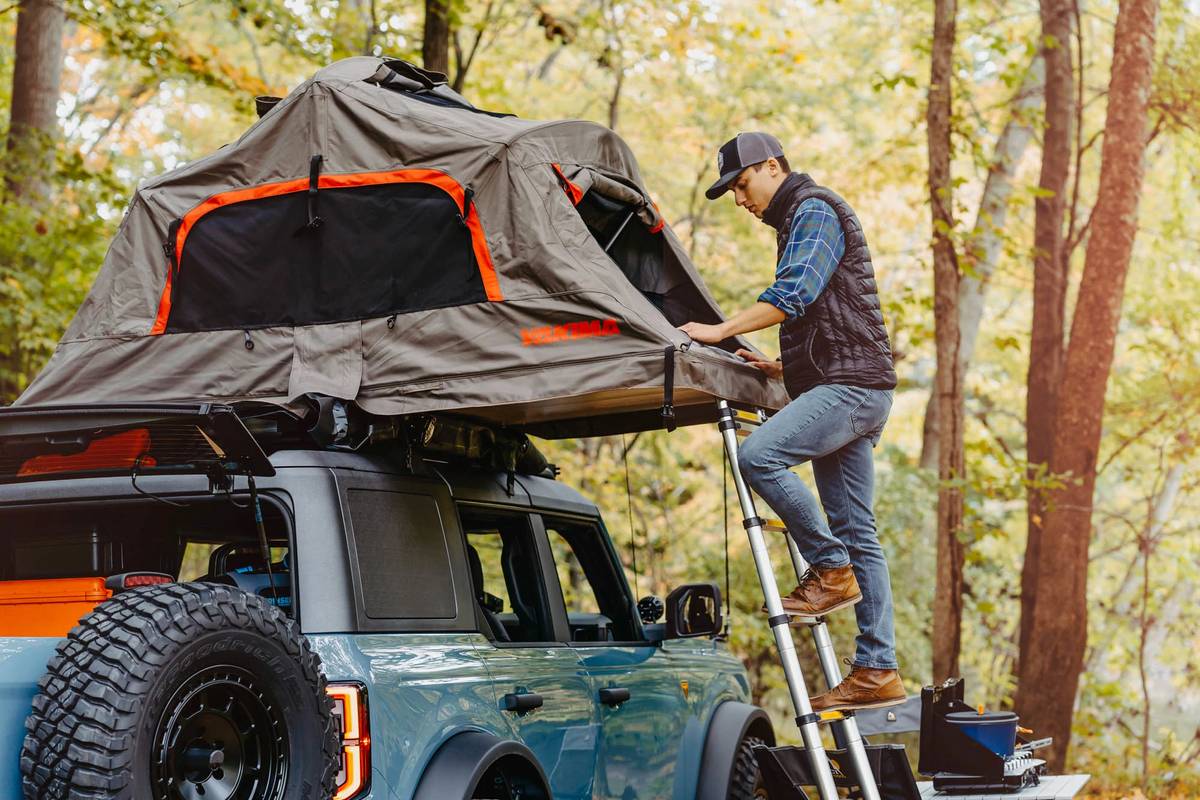 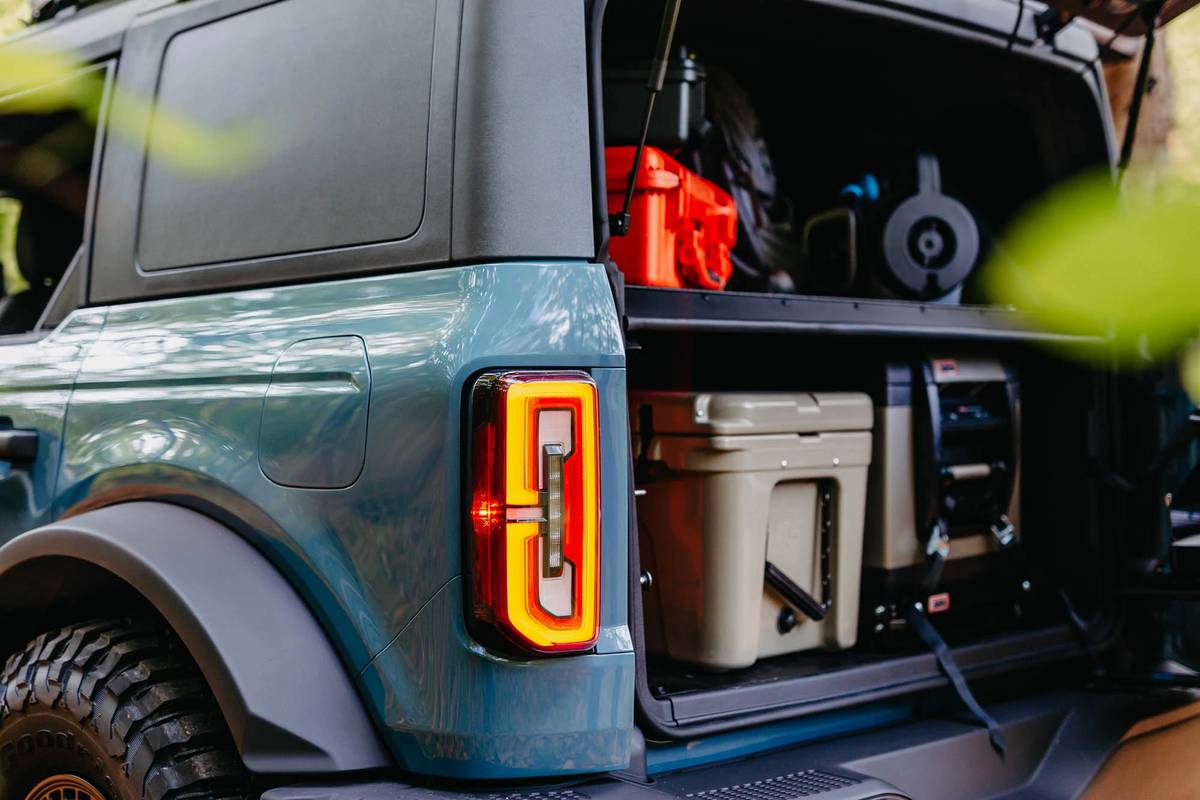 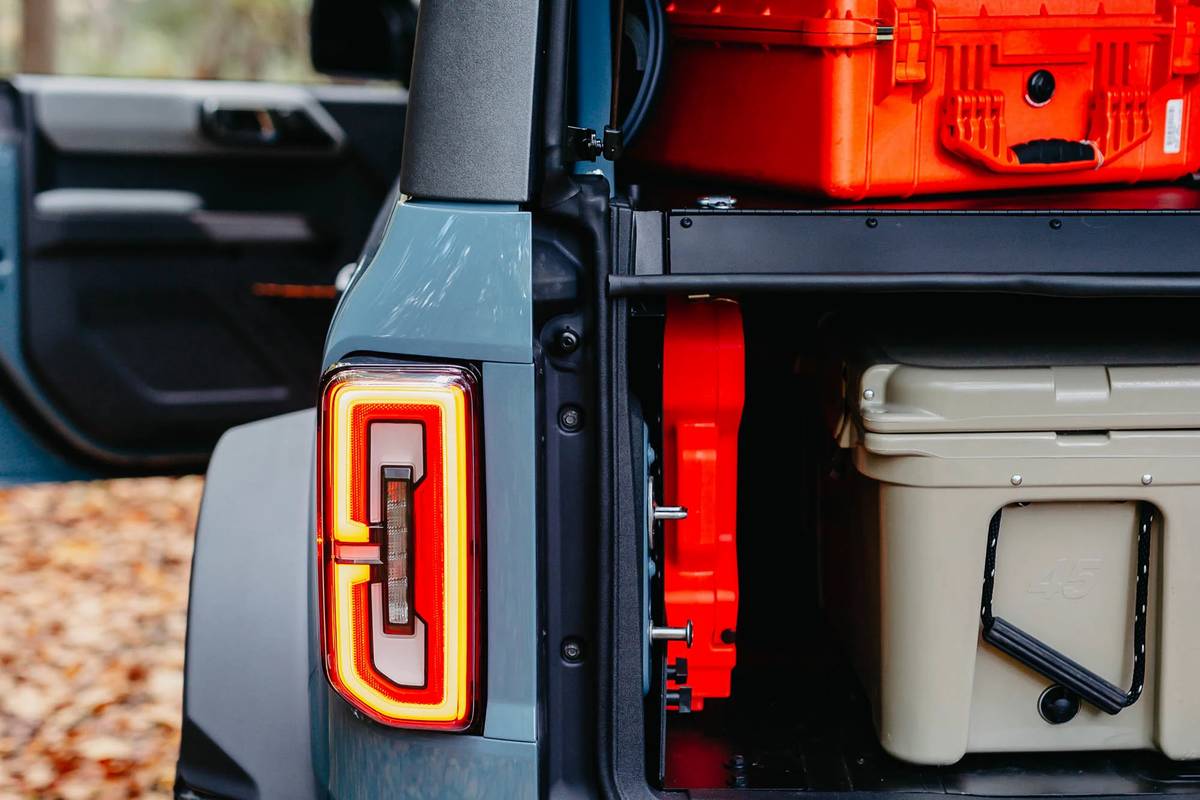 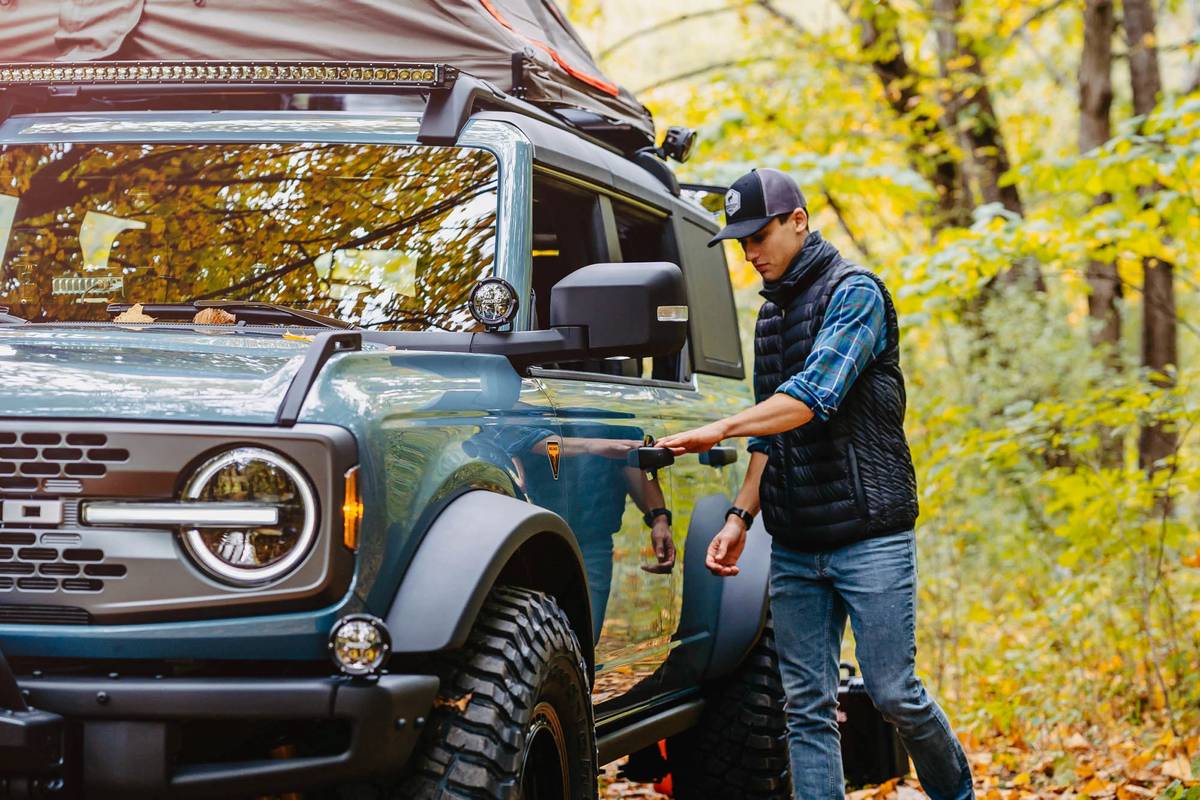 1/7
Ford Bronco Overland Concept | Manufacturer image
Don’t miss out on the latest news, reviews and videos from our in-house experts. Get updates in your inbox.

The standard wheels and tires on the Bronco have been swapped for 17-inch Fifteen52 Turbomatic wheels wrapped in 35-inch BFGoodrich KM3 mud-terrain tires. The front bumper is now a steel Ford Performance modular unit fitted with a Ford Performance by Warn winch. A factory roof rack has a Rigid Industries-brand light bar and a Yakima-brand two-person tent mounted on top, making it harder for unfriendly wildlife or the apocryphal hook-handed murderer to reach you (unless they can figure out ladders). An additional six Rigid light pods — one on each corner of the bumper, one on each side mirror and two on the rear corners of the roof — provide extra, 360-degree illumination. There’s also a citizens band antenna mounted to the rear bumper for noncellular communication.

Most of the Bronco Overland’s interior upgrades focus on the part of overlanding — which, for the uninitiated, is basically driving aimlessly and camping — where basic services aren’t readily accessible. It’s got an ARB-brand refrigerator, stove and cooking kit, all of it mounted to a cargo management system. There’s additional storage thanks to MOLLE (modular lightweight load-carrying equipment) grids inside. The Bronco Overland also carries a table and chairs so you don’t have to sit on the ground while you eat or relax in nature.

Can You Buy One?

The Bronco Overland will not come to production and some of its accessories aren’t available through dealers, though the automaker is including accessories in the price of the production Bronco, even for leases. But owners should be able to customize their Bronco using factory and aftermarket accessories to create a similar overlanding Bronco should they wish — just read your warranty closely before you do.