Genesis’ latest concept car is the Genesis X, an all-electric grand touring coupe that looks set to devour long highway stretches while coddling occupants in high-tech luxury. The brand’s fifth concept, the X eschews the trend of SUV-like EVs — see the Lexus LF-Z Electrified concept, plus the recent debuts of the Hyundai Ioniq 5 and Kia EV6 from Genesis’ related South Korean automakers — for a modern take on the traditional grand-tourer silhouette.

Here are four things to know about the Genesis X Concept:

1. It’s Stunning to Look At

Beauty is in the eye of the beholder, but to this particular beholder, the Genesis X Concept is beautiful. It looks like the brand’s designers saw the Polestar 1, Lexus LC 500 and the late Mercedes-Benz CL-Class and thought: Hey, we can do that. The elegant proportions show off the car’s potential for high-speed comfort. Standout details include:

Genesis has updated the designs of its current production cars to feature a two-line motif, and the Genesis X Concept takes that idea and runs with it. The most noticeable lines are those that make up the headlights, which curve from the front of the car to the fenders; they’re interrupted by the wheel well before continuing on the other side. It’s an interesting design choice, and it works here. A small set of two lines also appear on the side windows.

2. The Interior Is Beautiful, Too

Inside, the Genesis X Concept is what might become a new trend: differently colored front seats (seen previously on the Lexus LF-Z Electrified). The driver’s seat is a shade Genesis calls Scotch Brown, while the front passenger seat is an “Ocean Wave Green-Blue.” There appears technically to be a backseat, but in true grand-touring fashion, it looks more useful as a place for additional luggage or pets, not necessarily human beings.

The cockpit area is driver-focused, with most controls and displays angled toward the driver. The two-line motif is also visible here, particularly on the horizontal air vents and side-window moldings.

Most EVs these days are pushing for more environmentally friendly interiors, and while the Genesis X Concept doesn’t mention recycled materials, it does use upcycled scraps of leather from other upholstery processes to create the woven four-point seat belts, as well as parts of the steering wheel and airbag cover. 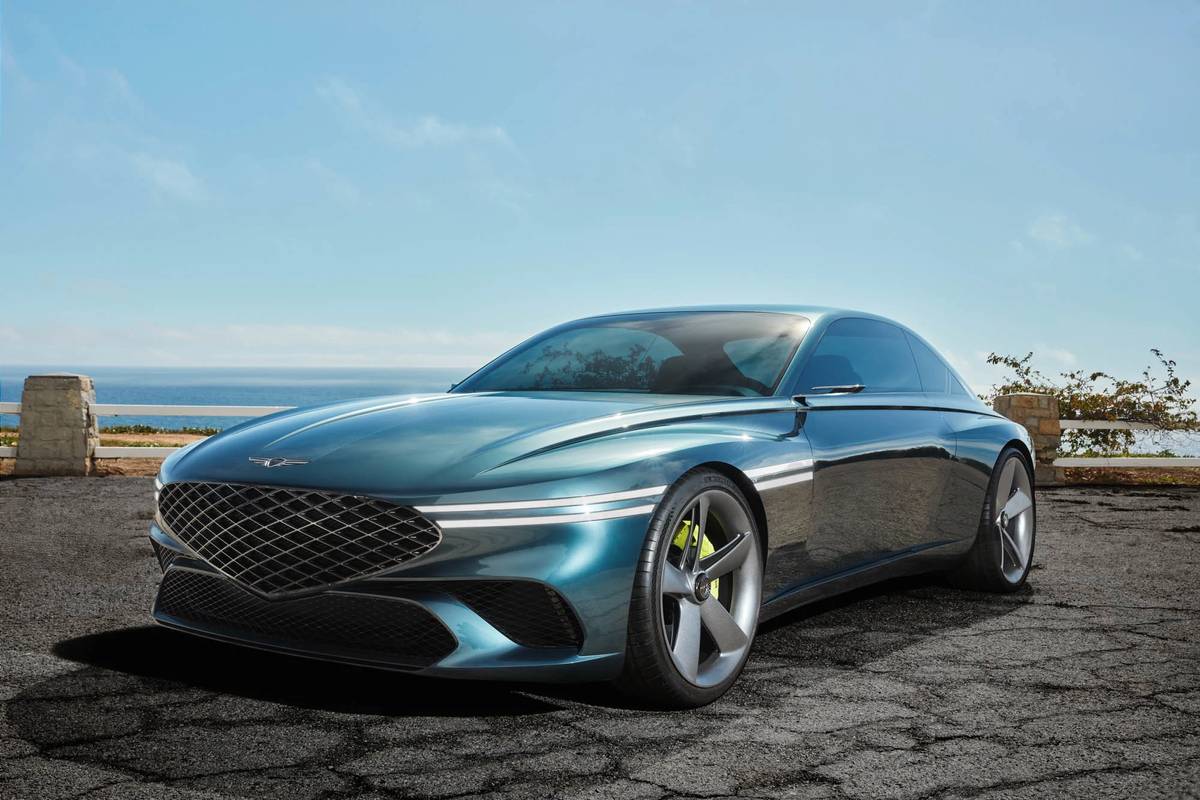 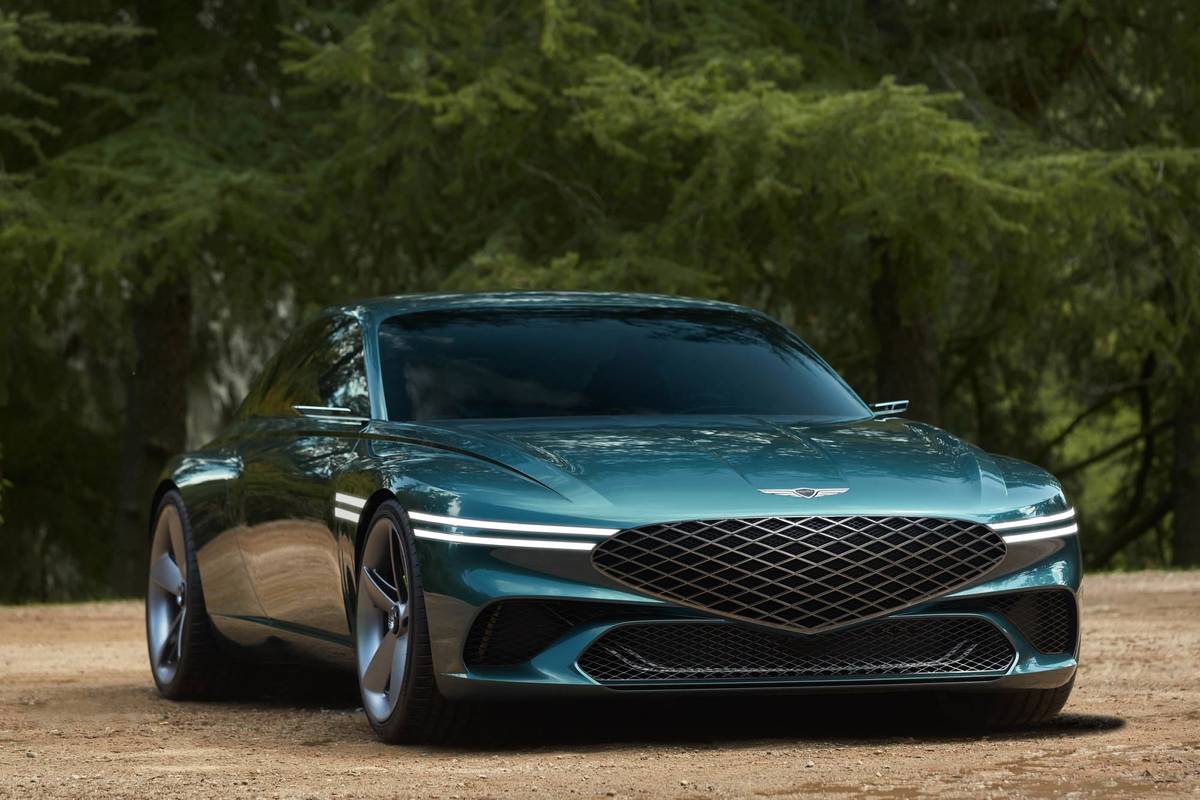 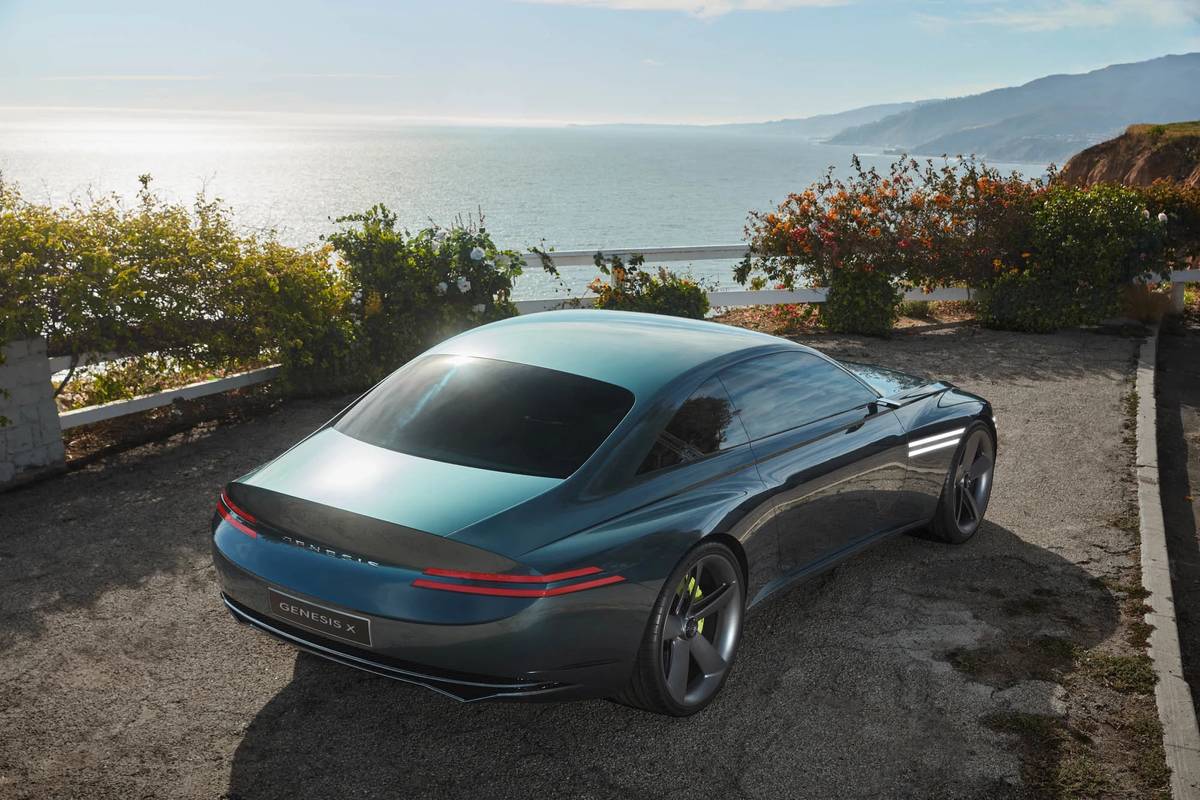 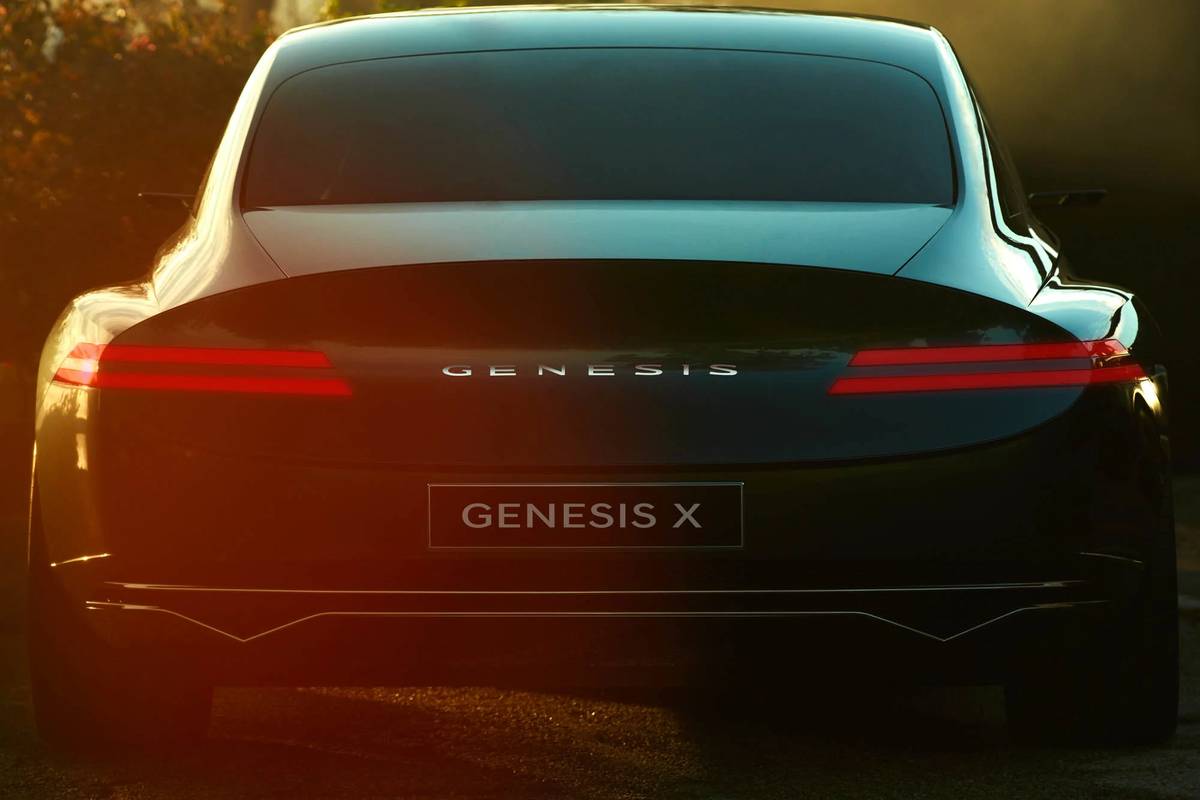 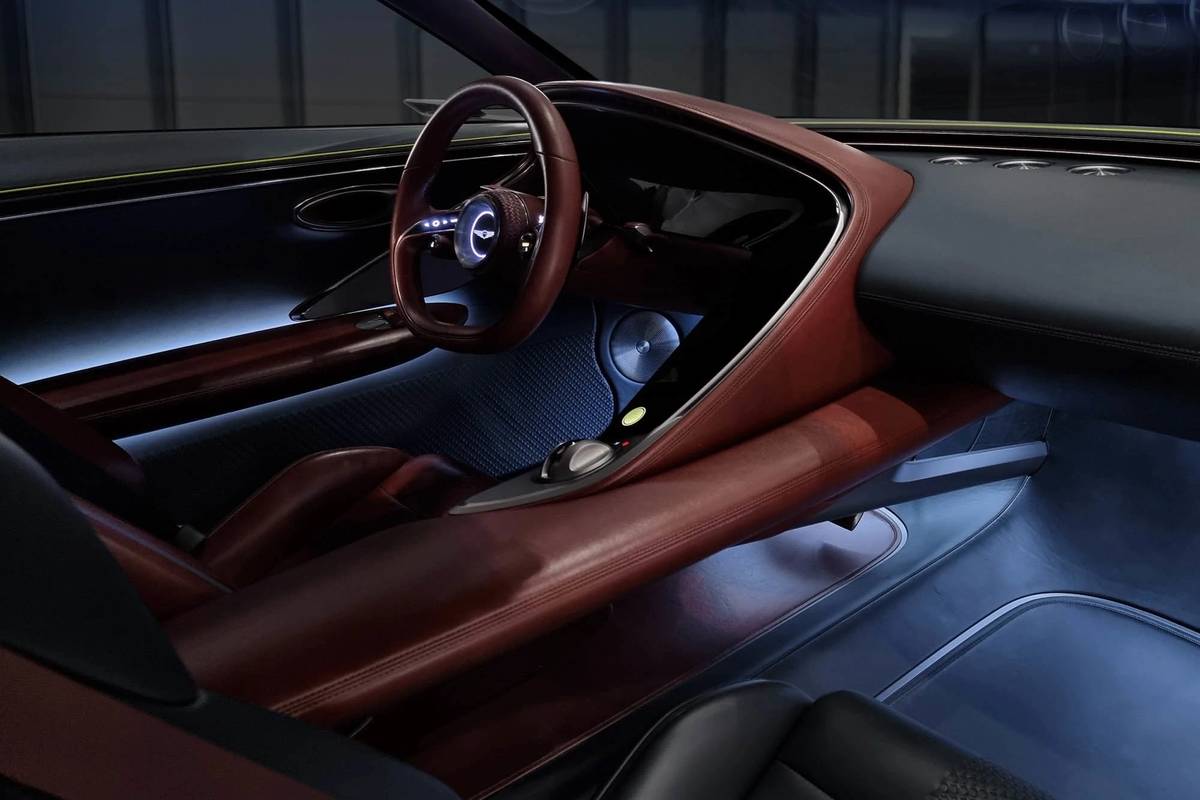 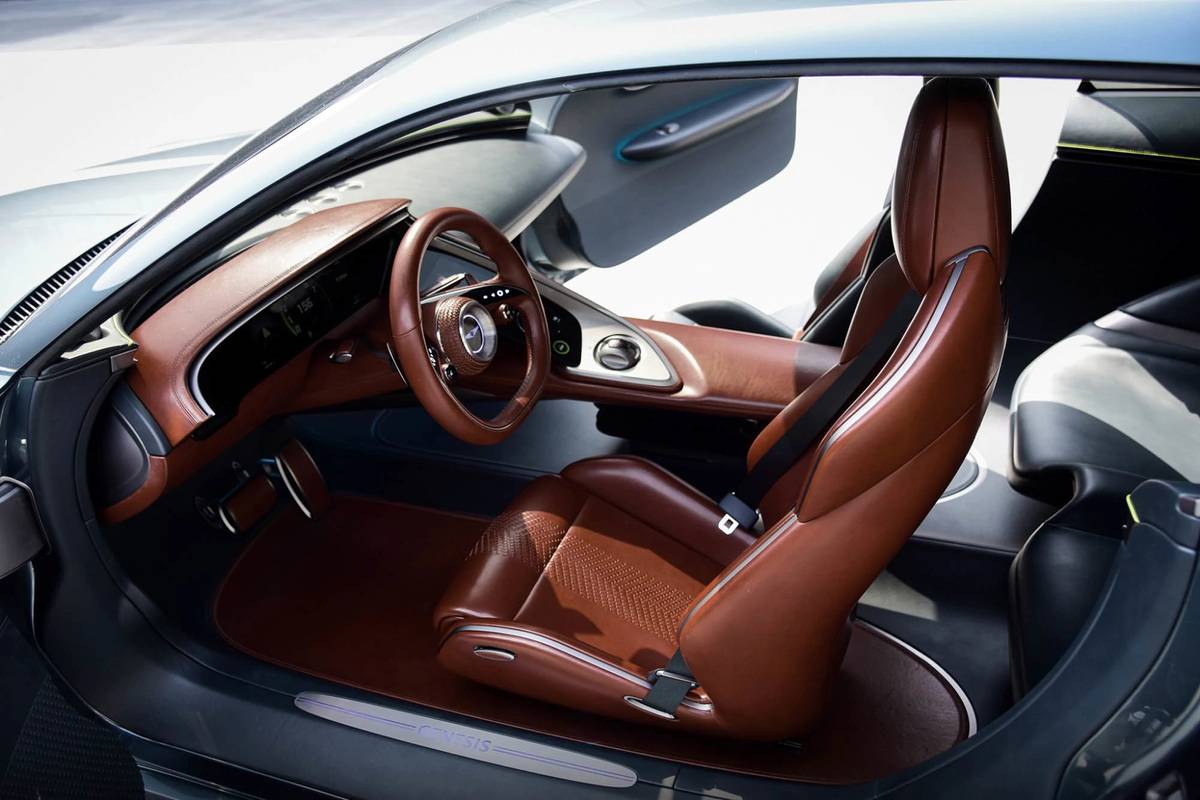 3. The Name Is Heroic, Allegedly

Fans of Roman numerals can relax: the X does not represent 10 in this case, which wouldn’t even make sense because the Genesis X is the brand’s fifth concept following the New York, GV80, Mint and Essentia concepts from previous years. Instead, Genesis says it “symbolizes a hidden hero.”

Despite its good looks, the Genesis X Concept is unlikely to become a production vehicle, unfortunately. Elements may live on in future Genesis products, but unless the EV revolution alters U.S. consumer tastes to revive the luxury coupe market, expect production EVs to look decidedly more practical.