Honda’s rollout of the latest generation Civic compact car continues with the 2022 Civic Hatchback. Like the Civic sedan we’ve already seen and recently driven, the hatchback gets new styling inside and out, plus numerous upgrades intended to improve the driving experience. One feature that sets the hatchback apart from the sedan is something enthusiasts will welcome: an available six-speed manual transmission.

Honda says the new Civic hatch has styling “inspired by European sportbacks,” with a long liftgate that hinges above the rear windscreen but slopes downward. The hatchback is also shorter than the sedan, with the rear overhang and overall length measuring 4.9 inches shorter than the sedan, according to Honda (179.1 inches for the hatchback versus 184 inches for the sedan). The hatchback also gets a unique grille treatment with a concave mesh design and unique taillights. Compared to the previous hatchback, the 2022 hatch has much smoother styling with fewer sharp angles. 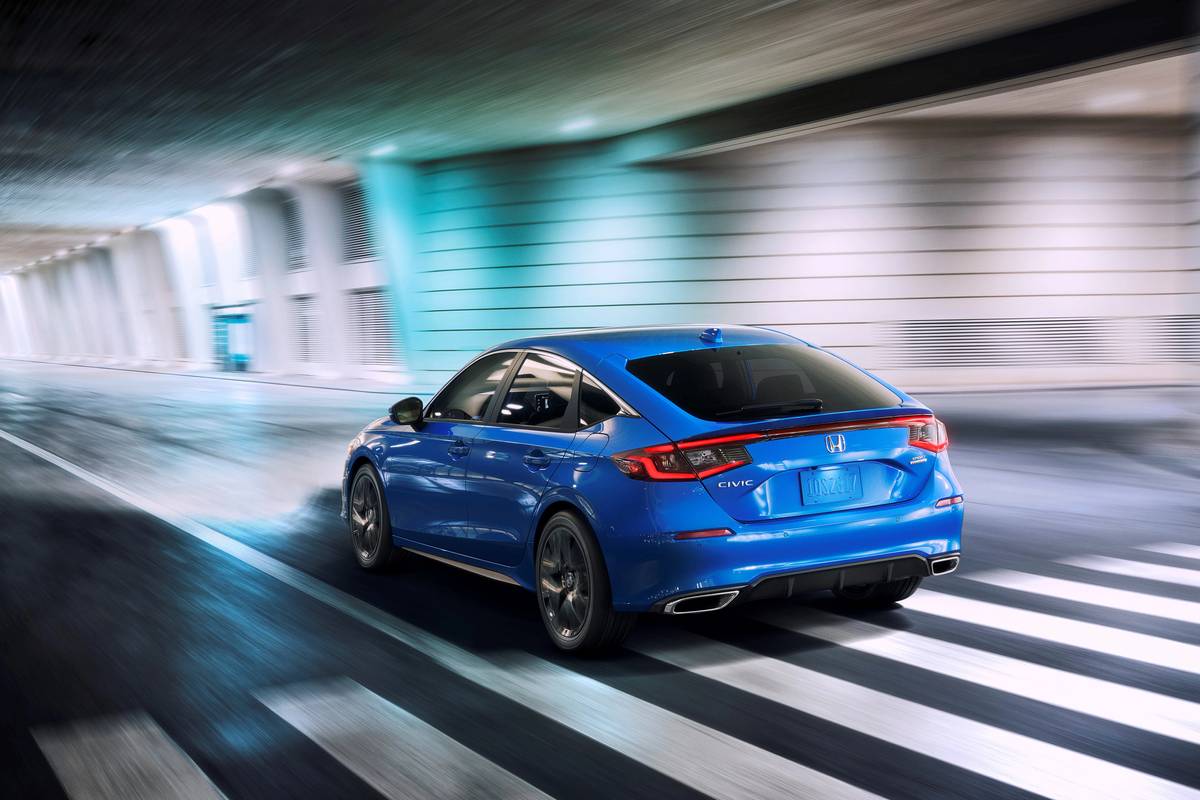 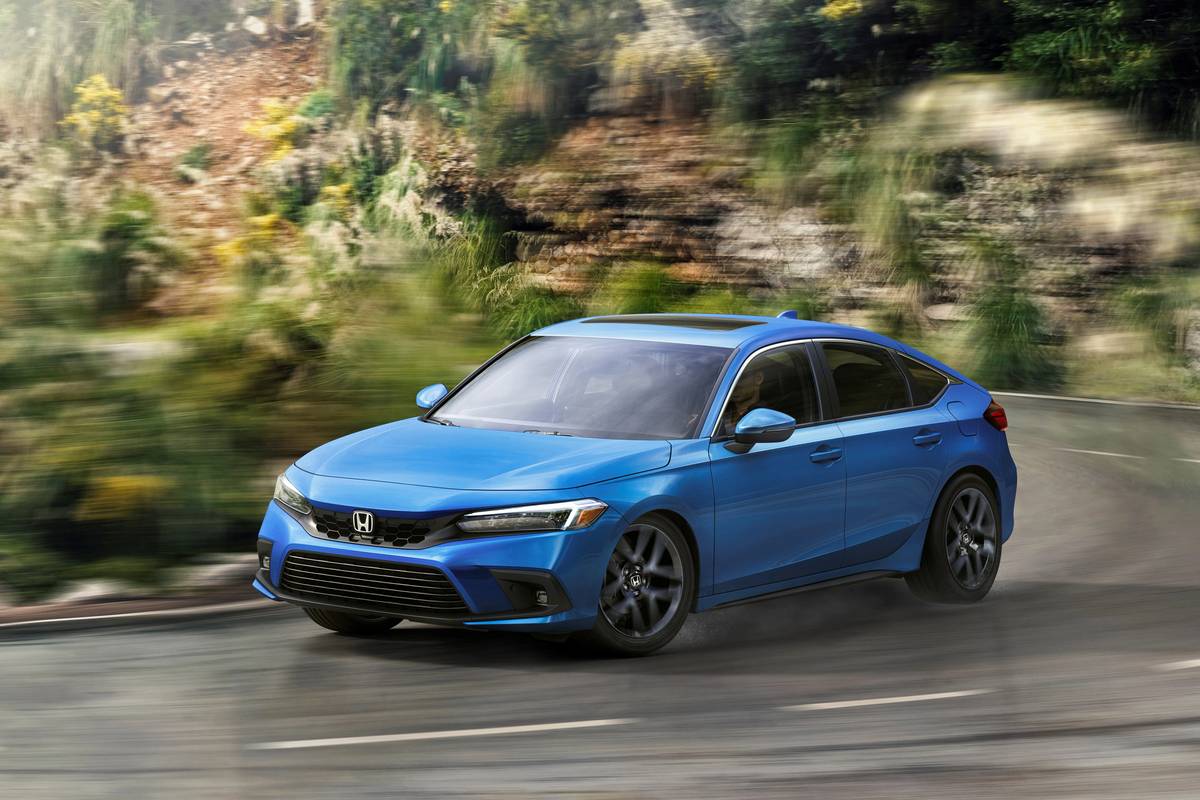 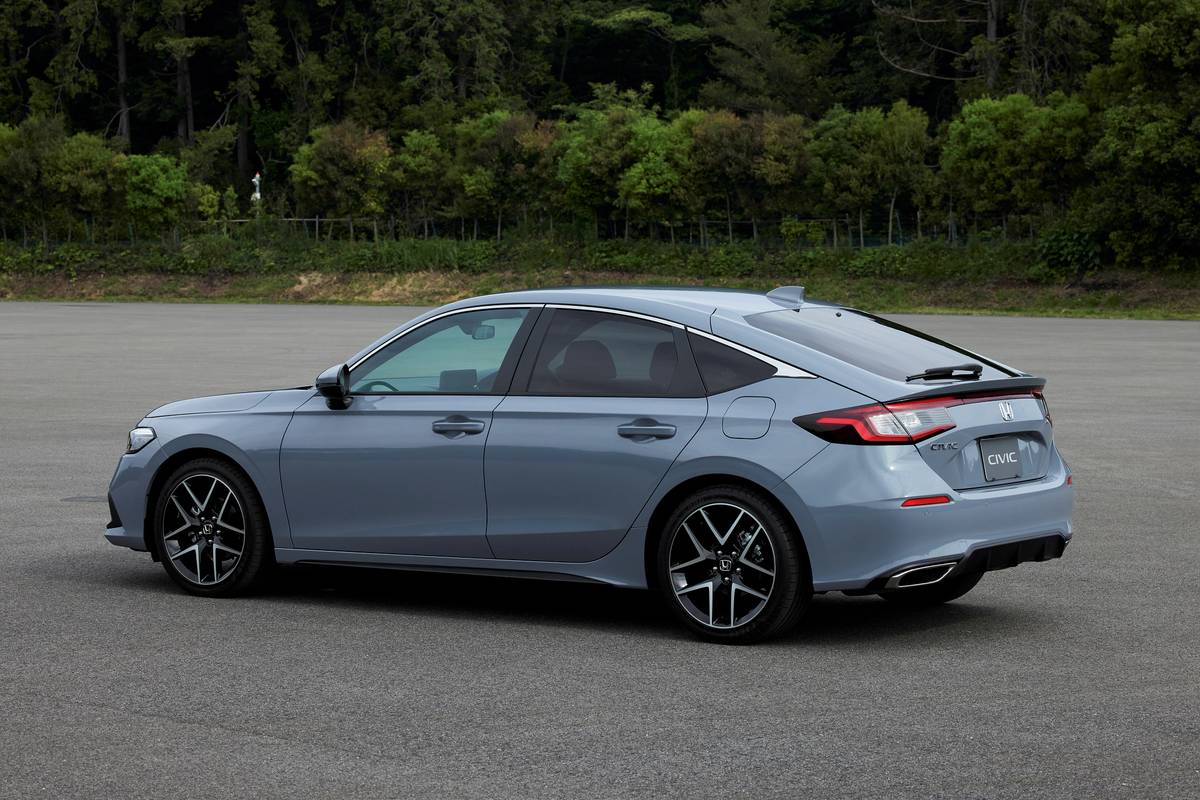 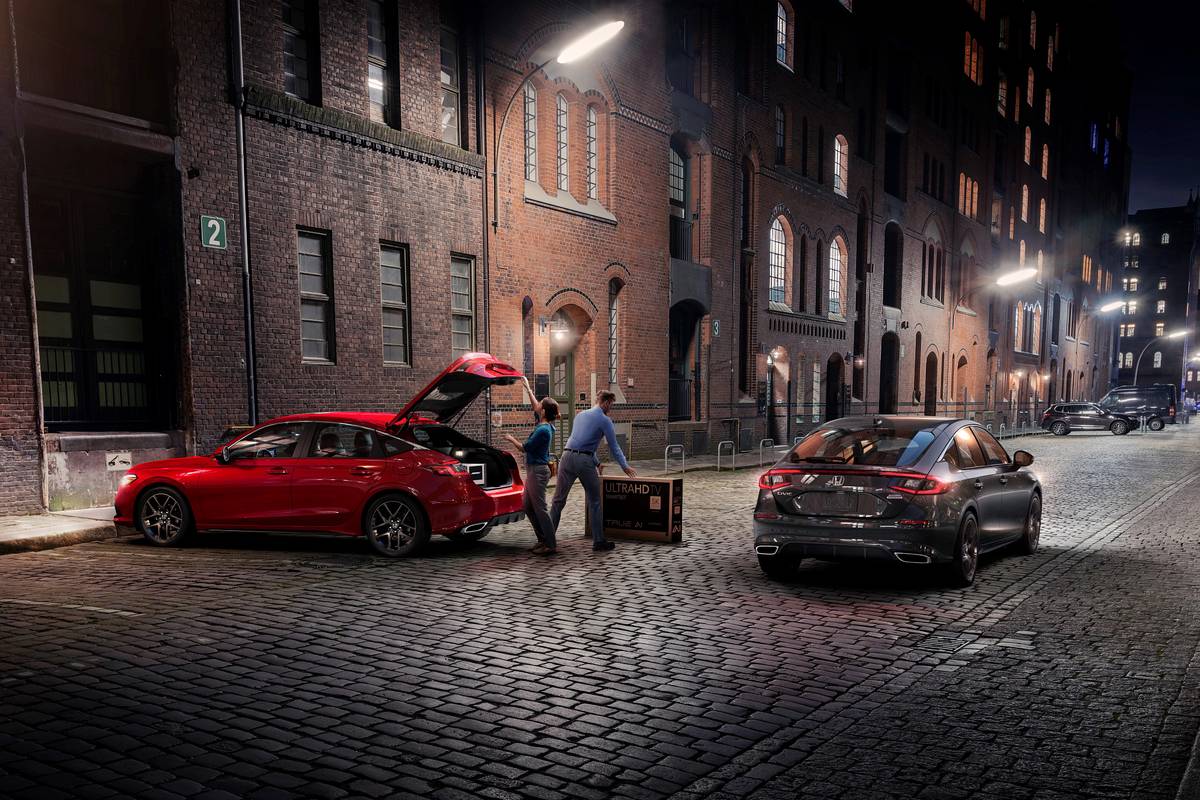 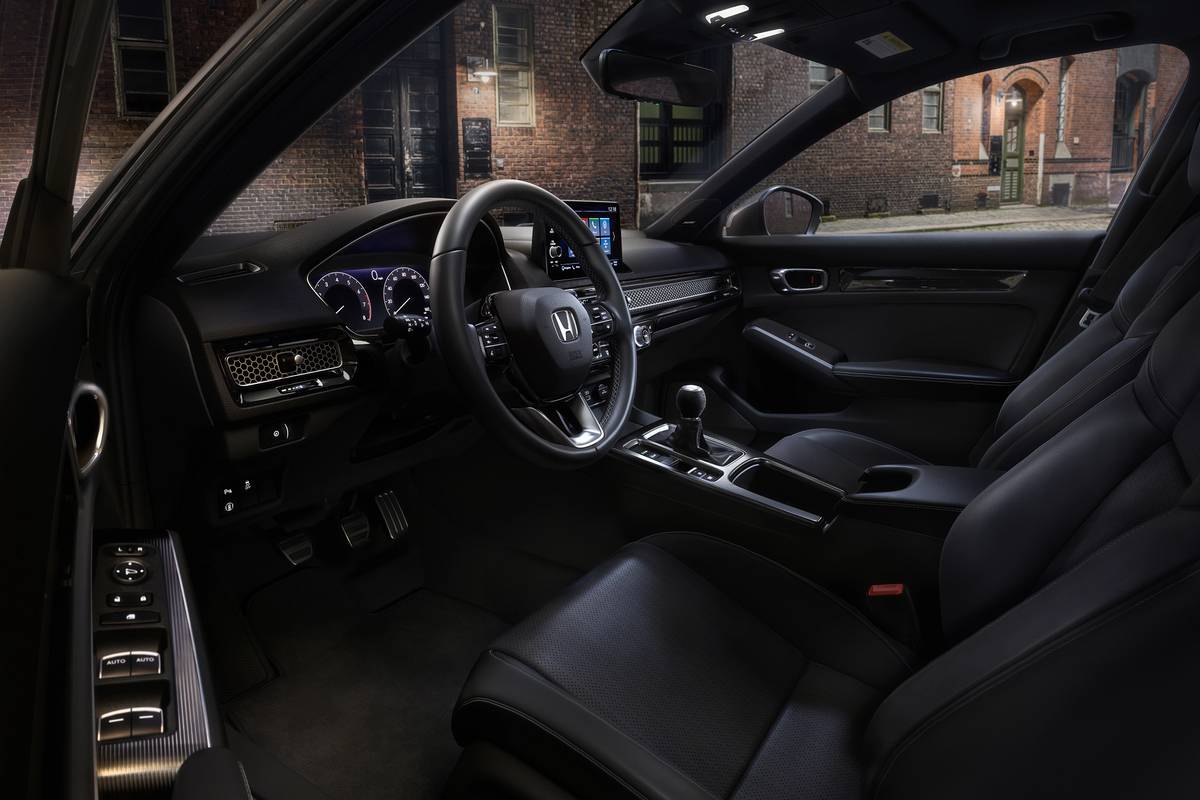 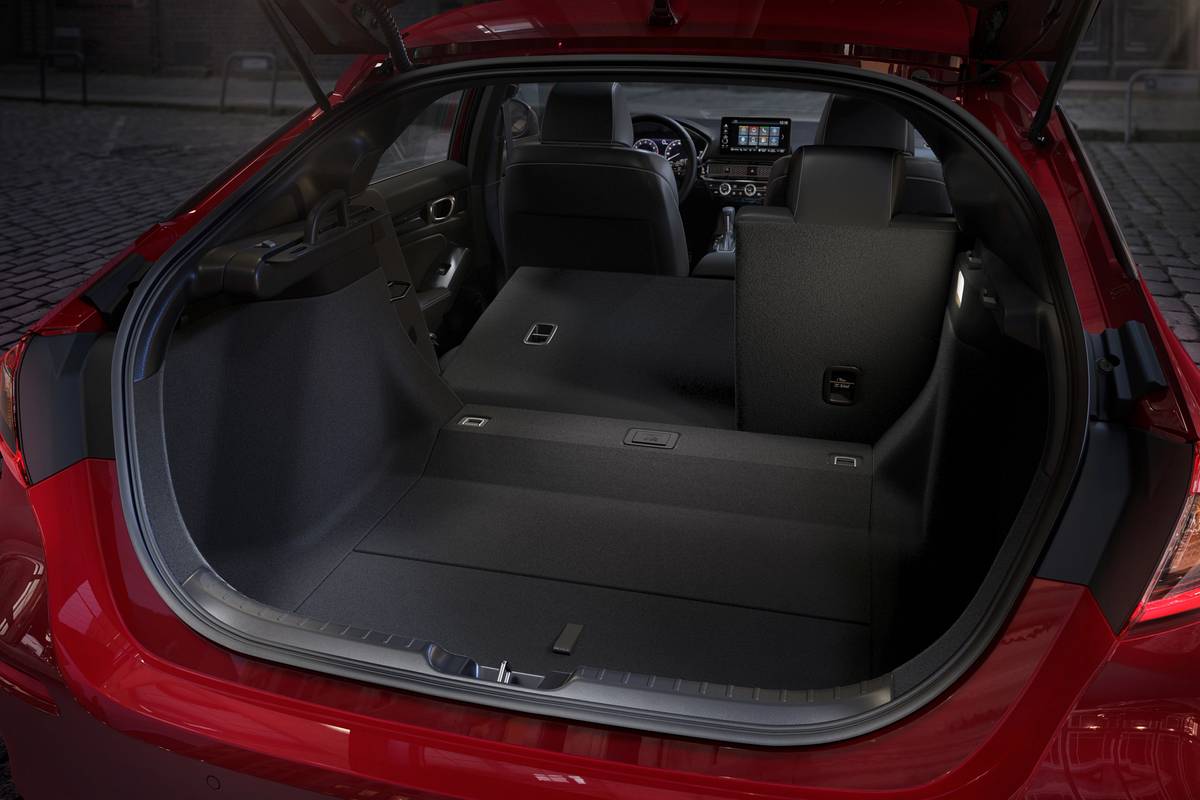 The new Civic sedan gained a retuned continuously variable automatic transmission that’s still available in the hatchback, but the great news here for enthusiast drivers is the addition of a six-speed manual transmission that’s available on the Sport and Sport Touring trims (the LX and EX-L remain CVT-only).

According to Honda, this six-speed is updated from the previous generation’s stick with a “sportier feel” thanks to shorter throws and increased rigidity. It also uses a new dual-mass flywheel to reduce noise and vibration. By making it available on the Sport and Sport Touring, Honda will allow the six-speed to be paired with either of the hatchback’s engine choices: the 158-horsepower, 2.0-liter four-cylinder with 138-pounds-feet of torque in the Sport or the revised 180-hp, turbocharged 1.5-liter four-cylinder with 177-pounds-feet in the Sport Touring.

3. Improvements From the Last Generation

Other updates present in the new sedan are also in the hatchback. That includes a retro-modern, minimalist interior design and available new 9-inch touchscreen display. The A-pillars have been pulled back almost 2 inches, its wheelbase is longer by 1.4 inches and its rear track is half an inch wider. The hatchback opening is 1.6 inches wider in the 2022, and Honda says rear legroom has increased by 1.4 inches. The 2022 also has a lower roofline than the previous generation, but rear headroom remains unchanged thanks to a new rear hatch hinge design that moves the hinges outward.

Mechanically, the hatchback also gets increased body rigidity — 19% stiffer, according to Honda. Its suspension and steering, like the sedan, have also been retuned to improve driving performance.

For improved safety, Honda is giving the hatchback the same new Honda Sensing suite of active-safety features. That replaces the previous camera-and-radar setup with a single camera system and adds a Traffic Jam Assist feature that works with other safety systems to keep the Civic in its lane and at a set follow distance at low speeds.

For the first time, the 2022 Civic Hatchback will be produced in America at Honda’s Greensburg, Ind., facility, which may improve the Civic’s overall ranking on next year’s Cars.com American Made Index. Production is scheduled to begin later in 2021, and pricing should be available closer to that time.