CARS.COM — They say you can’t understand another person’s experience until you’ve walked a mile in their shoes — or perhaps in the case of Ford’s “empathy belly,” driven a car in a maternity suit. The Detroit automaker’s pregnancy-simulating apparatus aims to help the non-expectant better understand what to expect when someone else is expecting and apply that empathy to making moms-to-be safer behind the wheel.

Related: I Tested Ford’s Drugged Driving Suit and You Won’t Believe What Happened! (OK, I Crashed)

Ford said its engineers use the empathy belly to ensure pregnant drivers are considered during the car design process. The automaker also uses the suit as a public education tool on the importance of proper seat belt use by pregnant women. That’s of particular relevance during the summer, as July and August are two of the busiest months for baby births, with each month logging between 350,000 and 360,000 new arrivals in 2013 and 2014, according to the Centers for Disease Control and Prevention.

Having previously donned Ford’s drugged-driving suit, simulating the experience of being behind the wheel while under the influence of drugs and alcohol — to disastrous effect — I was eager to find out what it was like sitting in the driver’s seat during my third trimester. And while I have no illusions that I have even the faintest idea of what it feels like to be pregnant, I do have a pretty good handle on the logistical challenges of climbing into and out of a car, buckling up and properly positioning oneself behind the wheel with a sizeable baby bump.

The suit consists of several pieces, the largest of which is a vest that fits around the torso with Velcro straps, and comes complete with belly and breasts; it fits over a compression strap that goes around the chest to create the shortness of breath felt by expectant mothers. Once that’s in place, two balls vaguely the size of an orange and the weight of a shot put are placed into tight pockets on either side of the stomach area to mimic the poking sensation of the fetus’ limbs. Finally, another weight Velcros to your lower back for further pregnancy-approximating discomfort. [Check out the gallery below.] 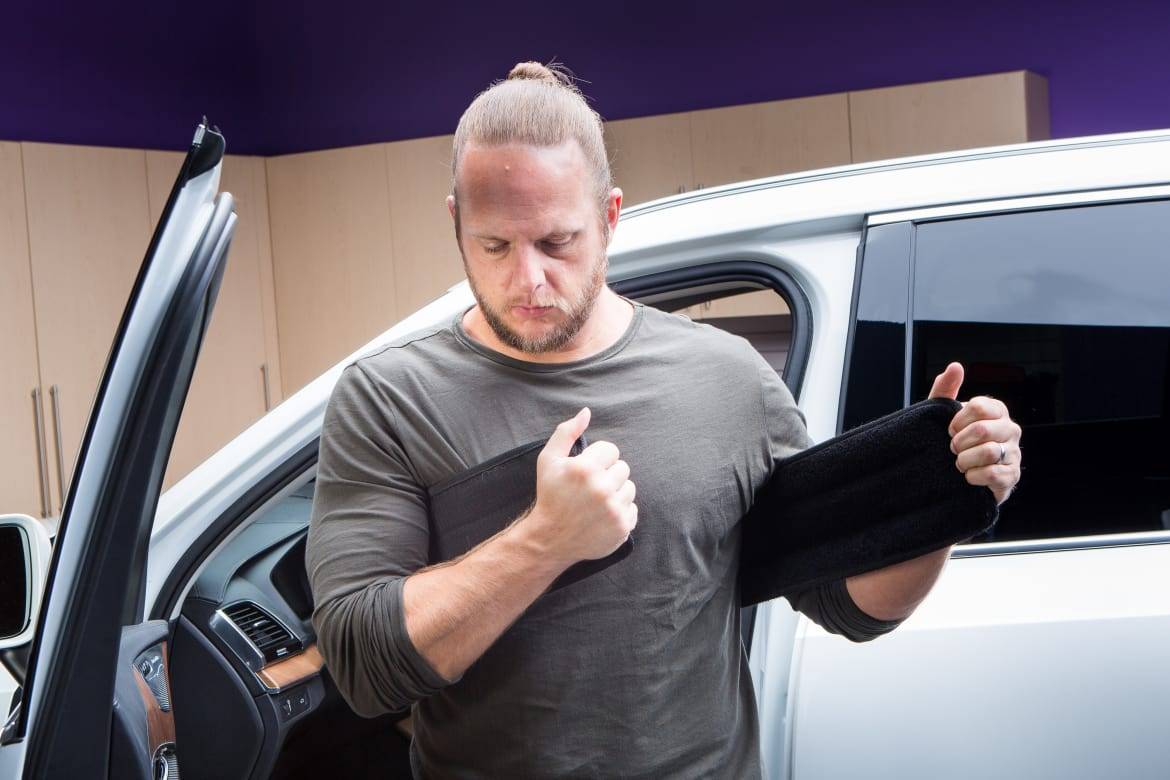 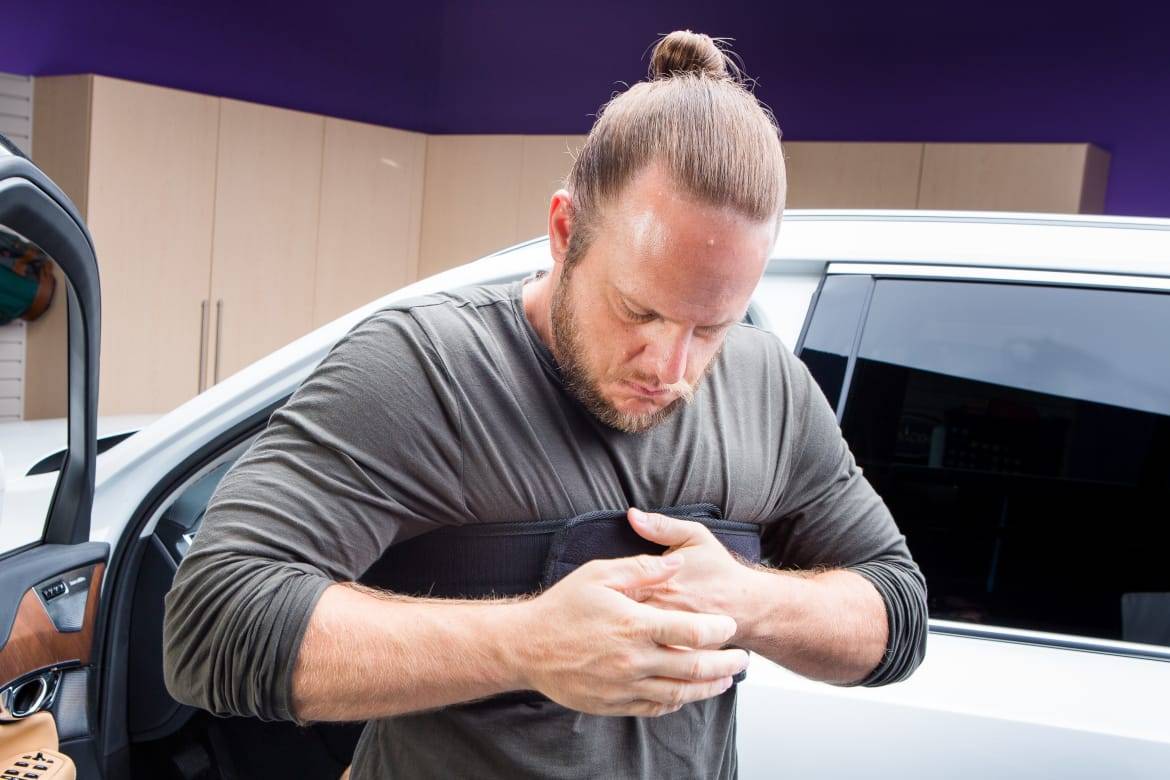 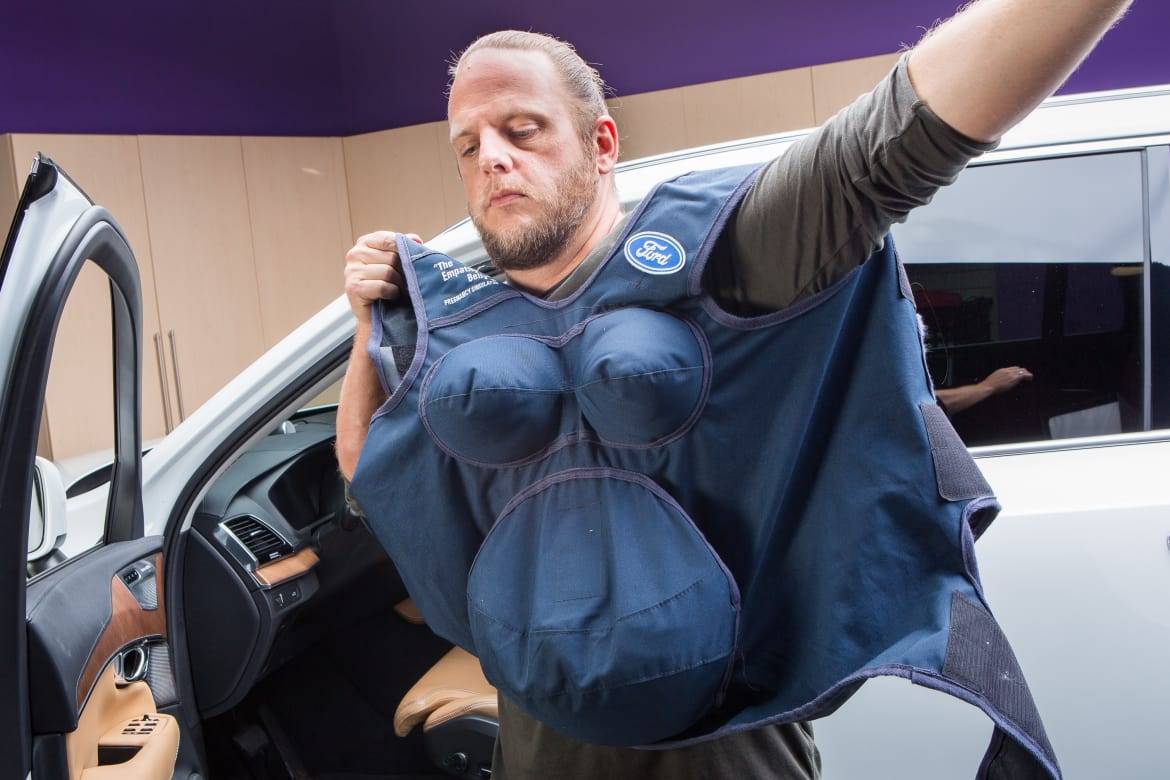 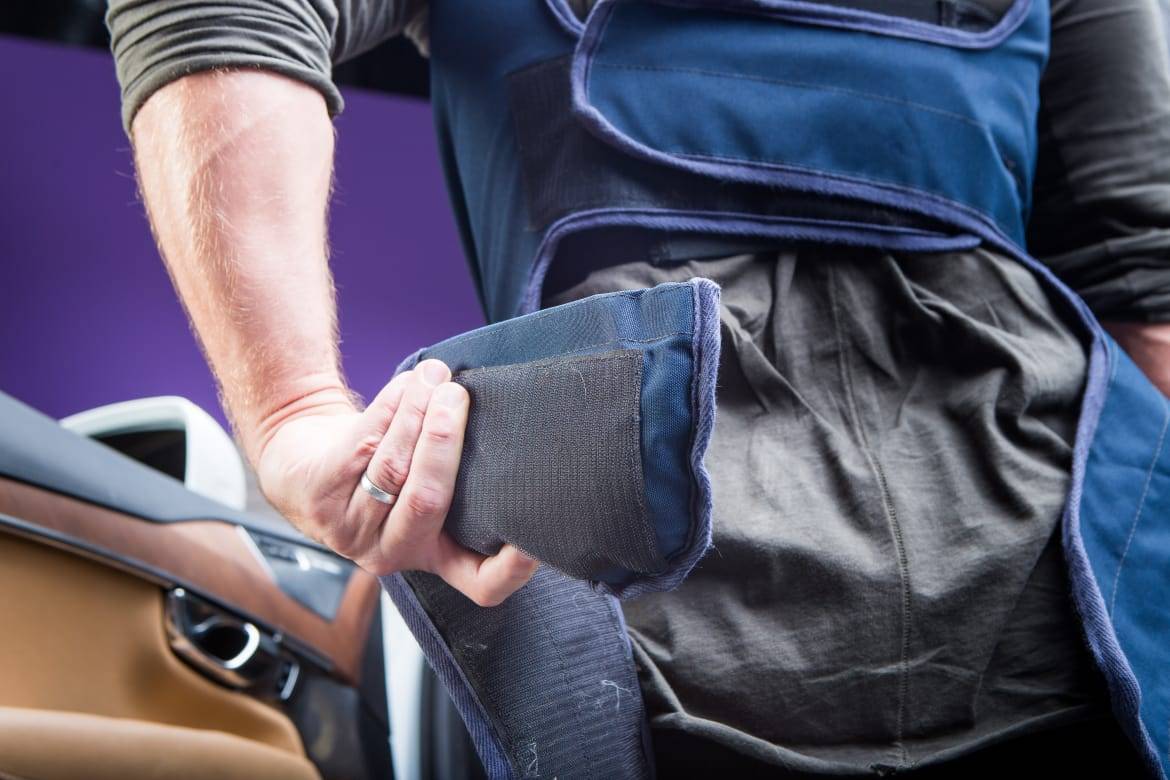 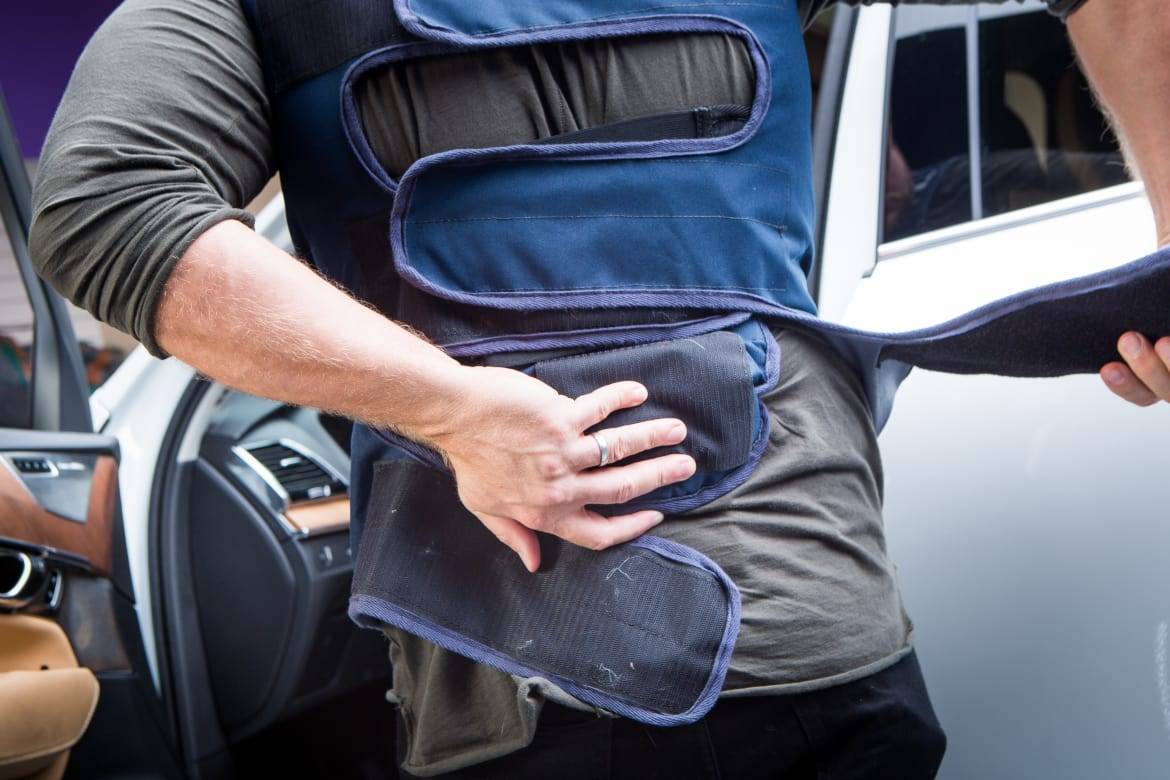 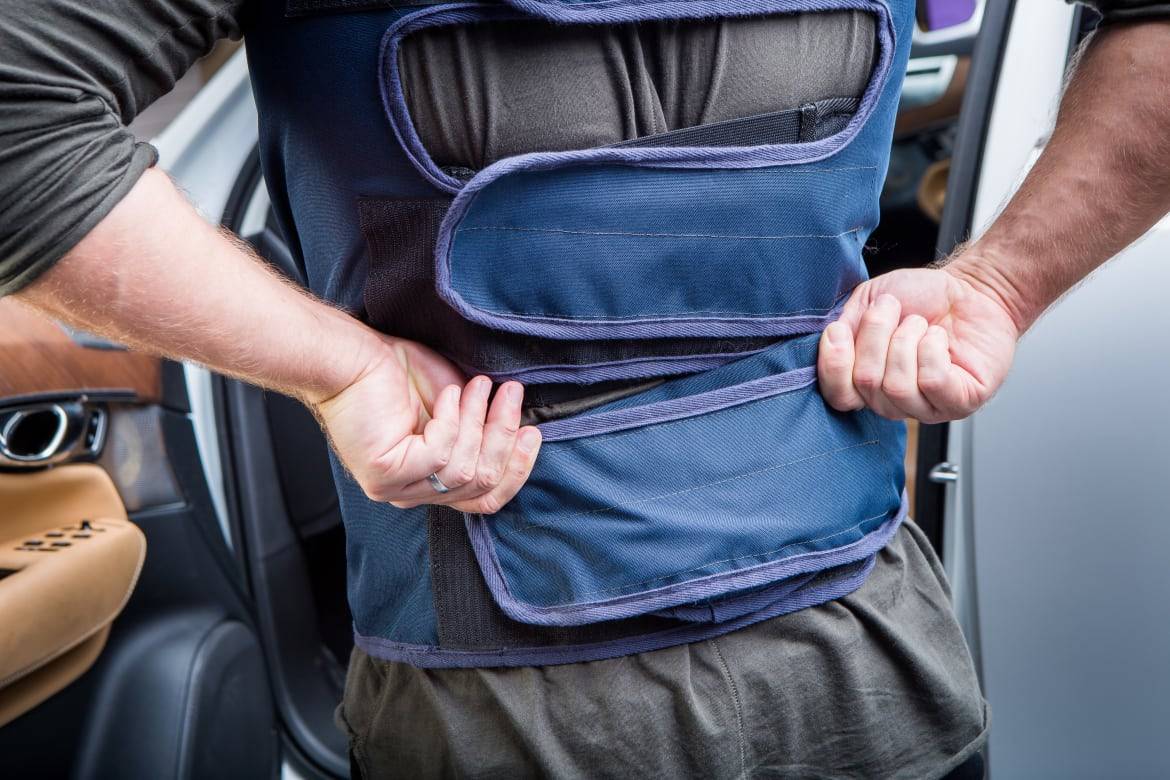 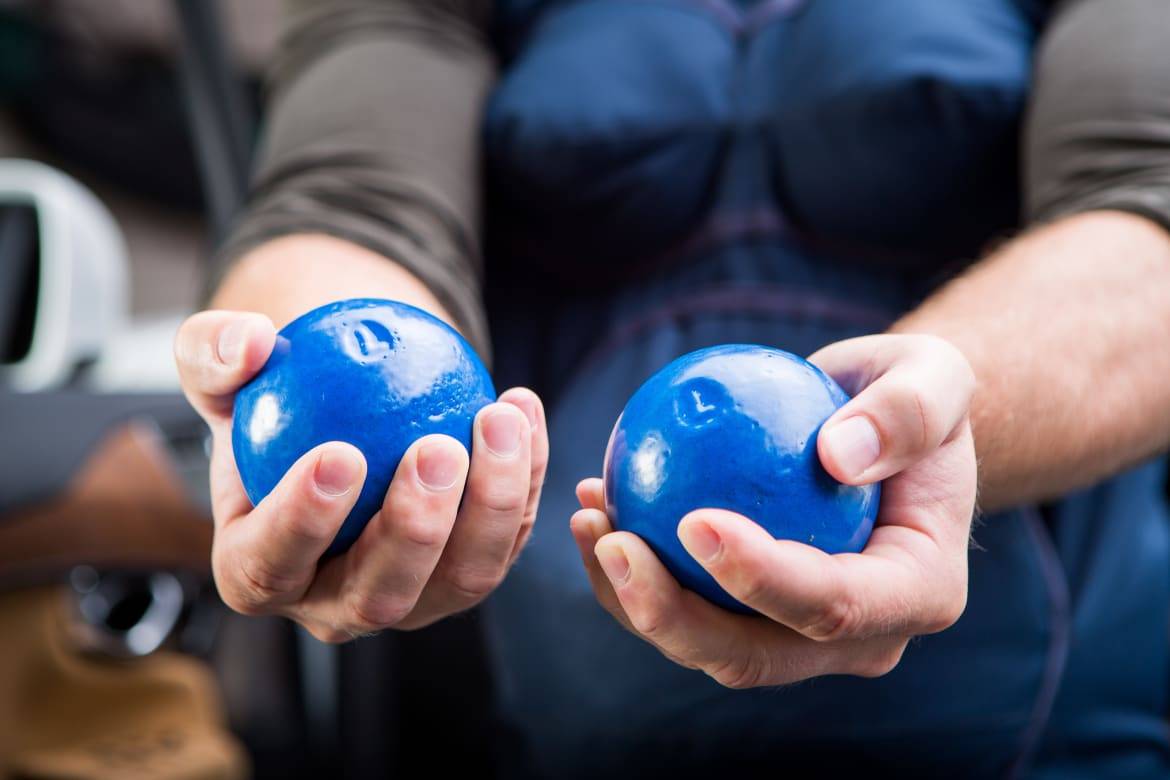 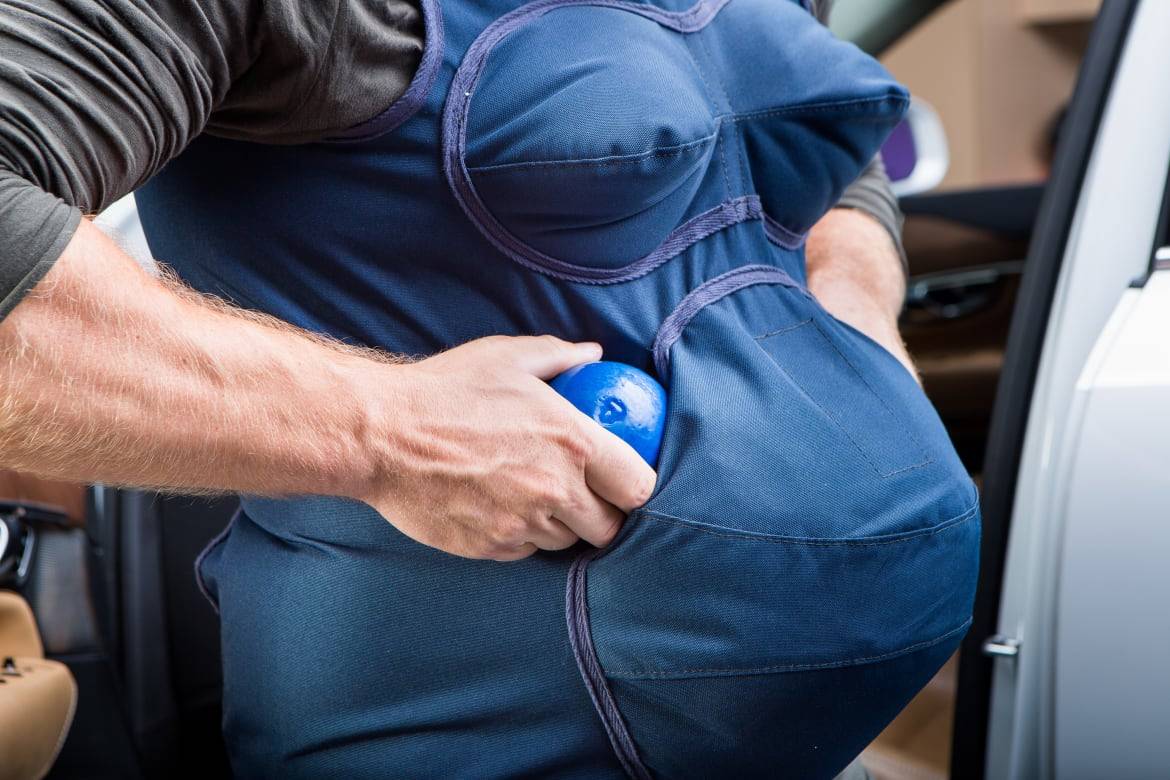 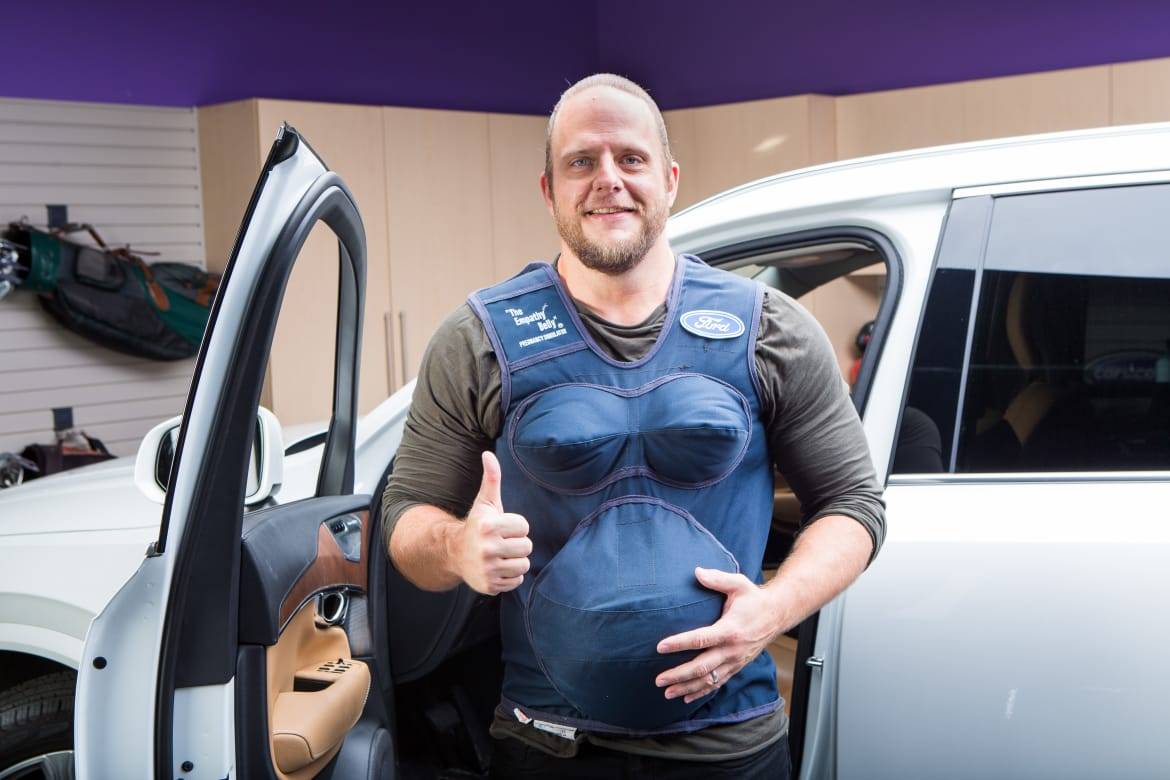 Ford says the whole package weighs 30 pounds — the average total weight gain for a pregnant woman — but it feels significantly heavier than that. For me, it wasn’t so much the weight as it was the bulk that made things tricky, requiring extra effort while climbing into and out of the driver’s seat. I tested the empathy belly in the 2017 Jaguar F-Pace SUV, which has a more accommodating ride height, so I can only imagine having to lower oneself down into a low-riding sedan or coupe.

From there I went step by step through Ford’s recommendations for driving while pregnant, which are as follows: 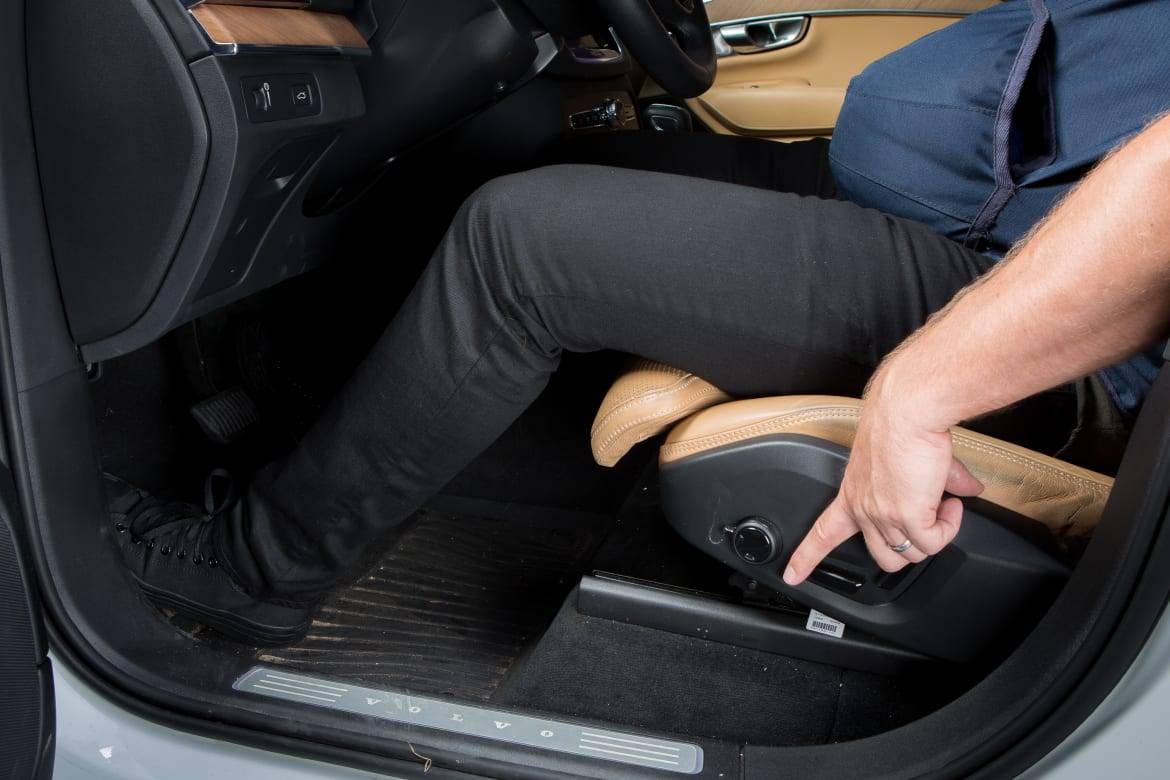 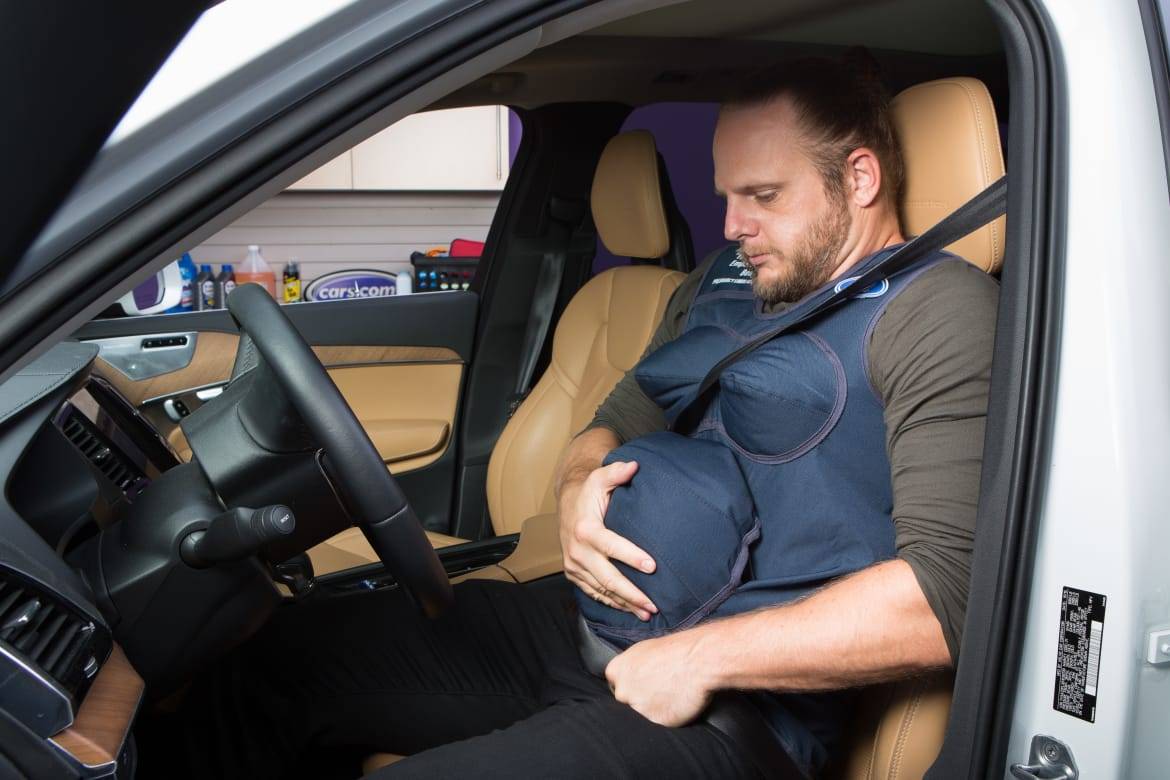 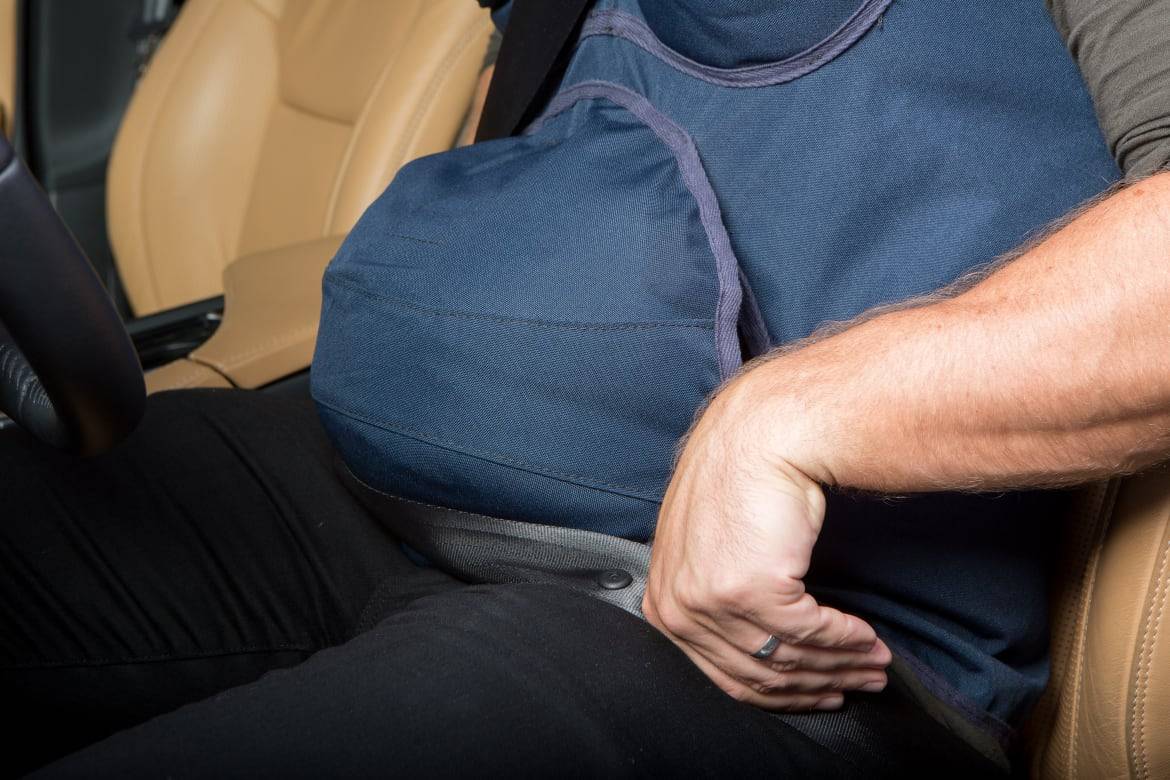 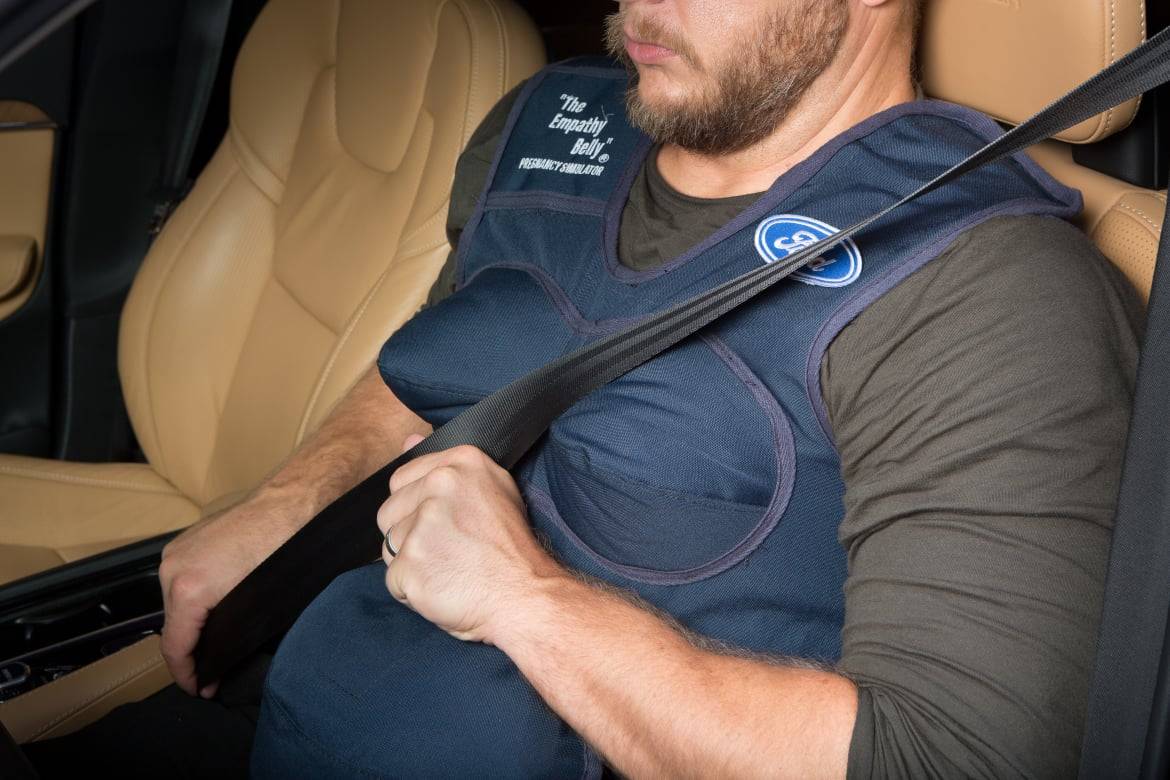 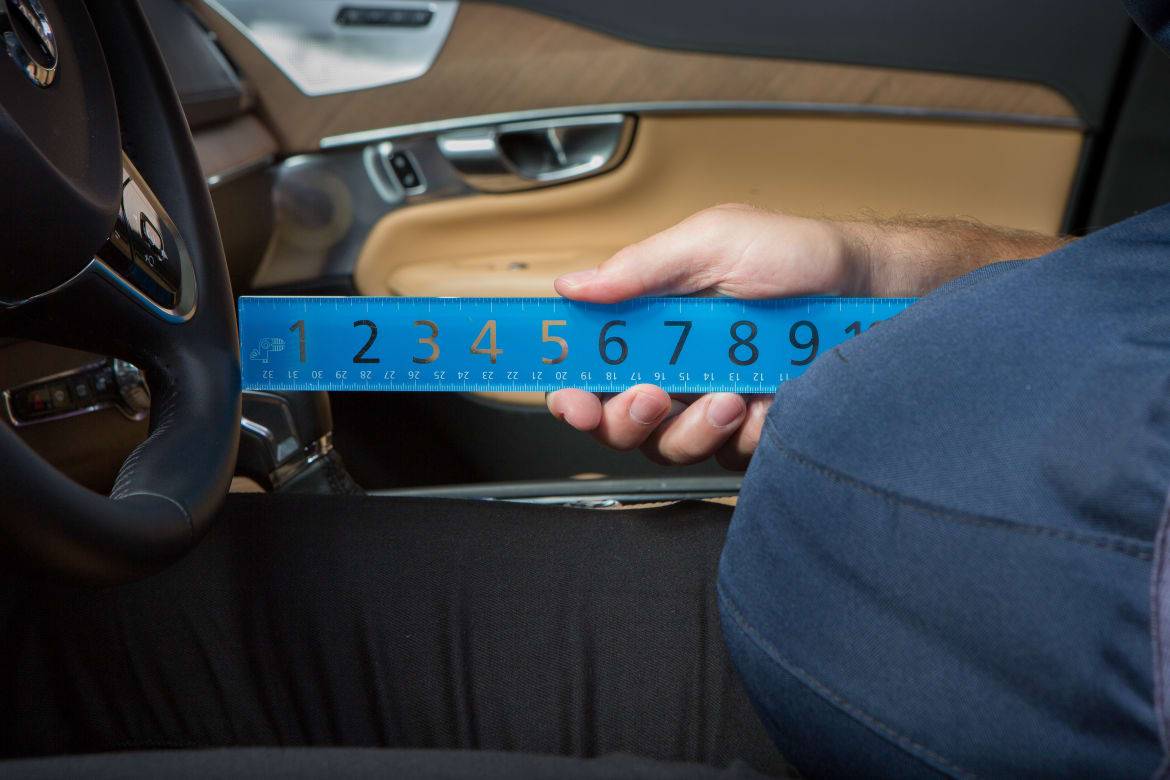 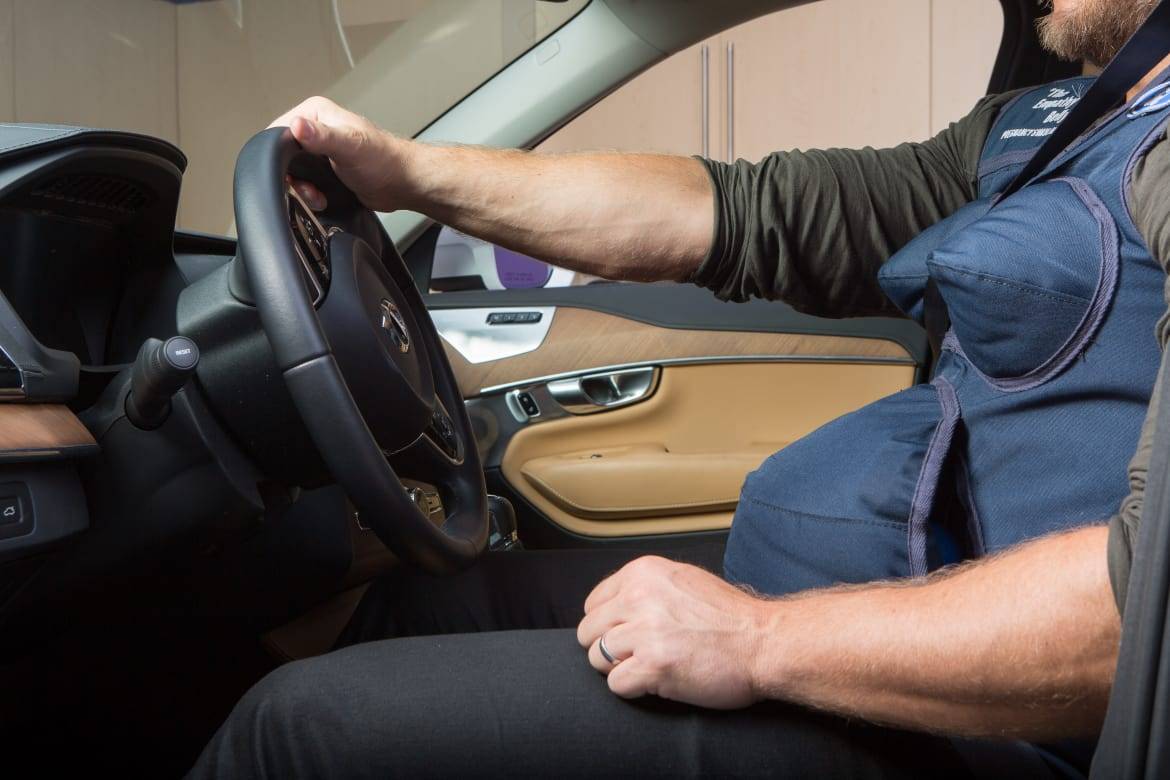 While I can’t claim soul sisterhood with actual expectant mothers, I did gain some useful knowledge to help them be safer and more secure in a car — and with regard to the daily challenges they face during activities as mundane as driving, a whole lot of empathy.