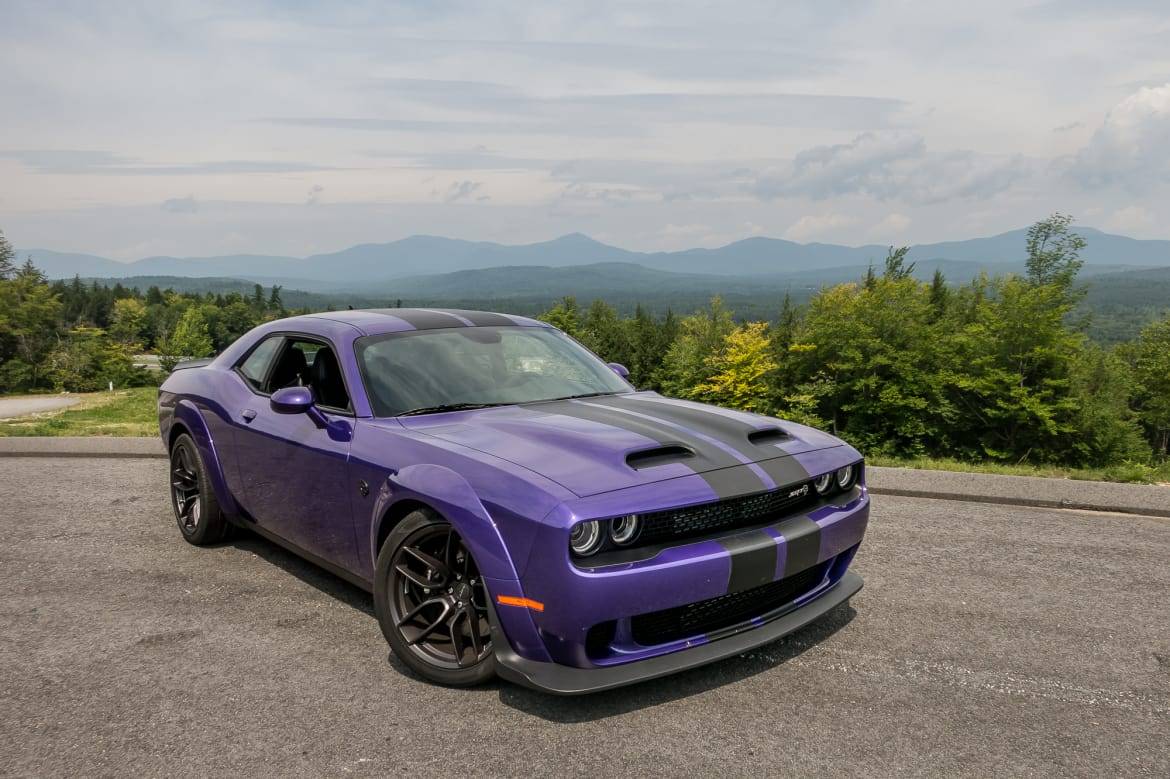 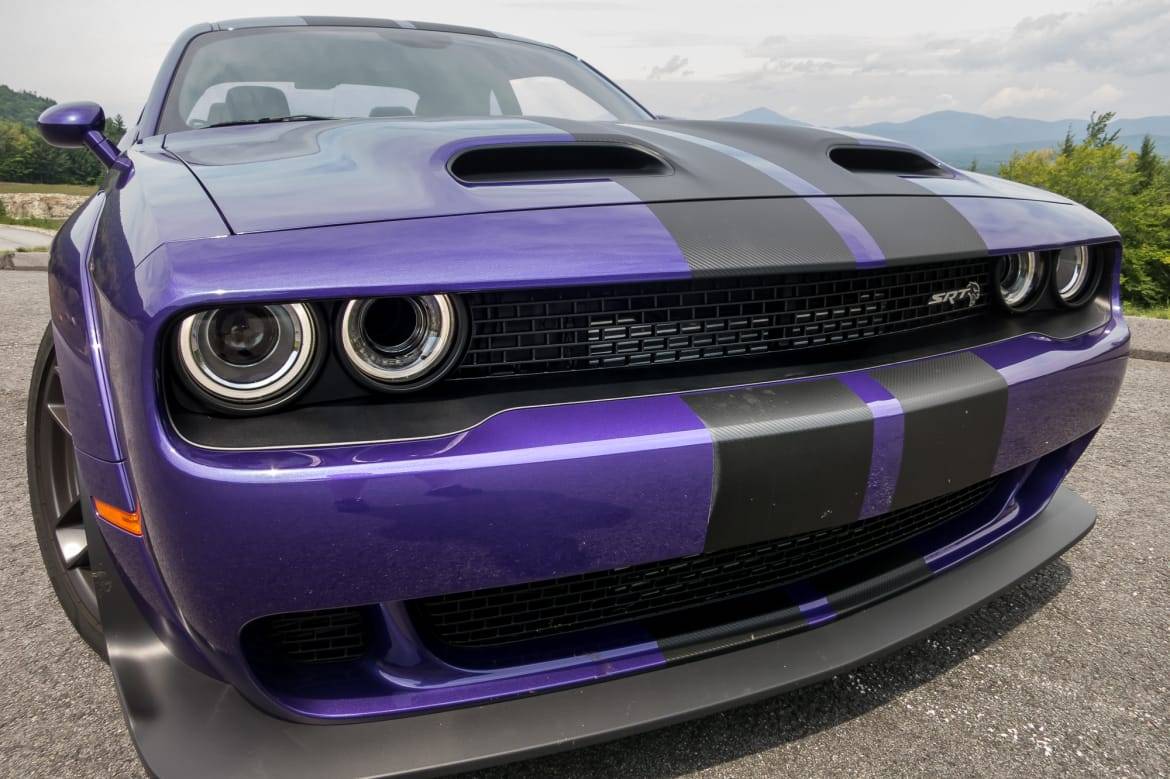 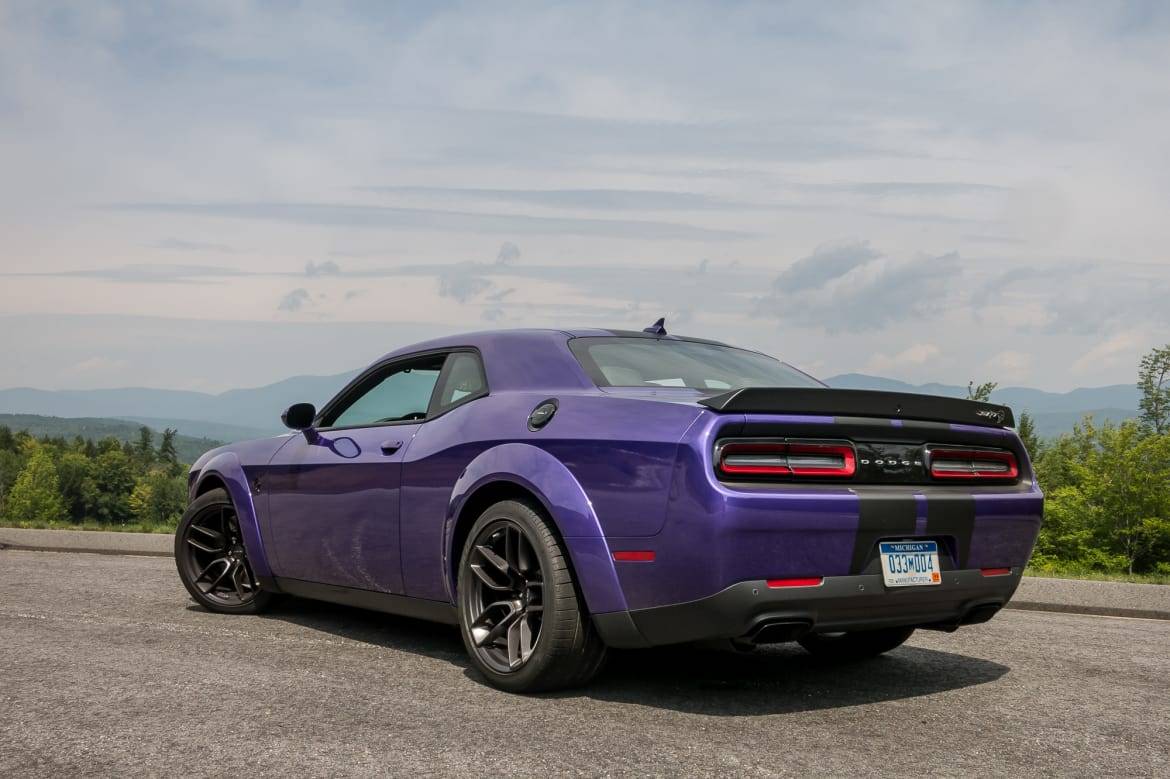 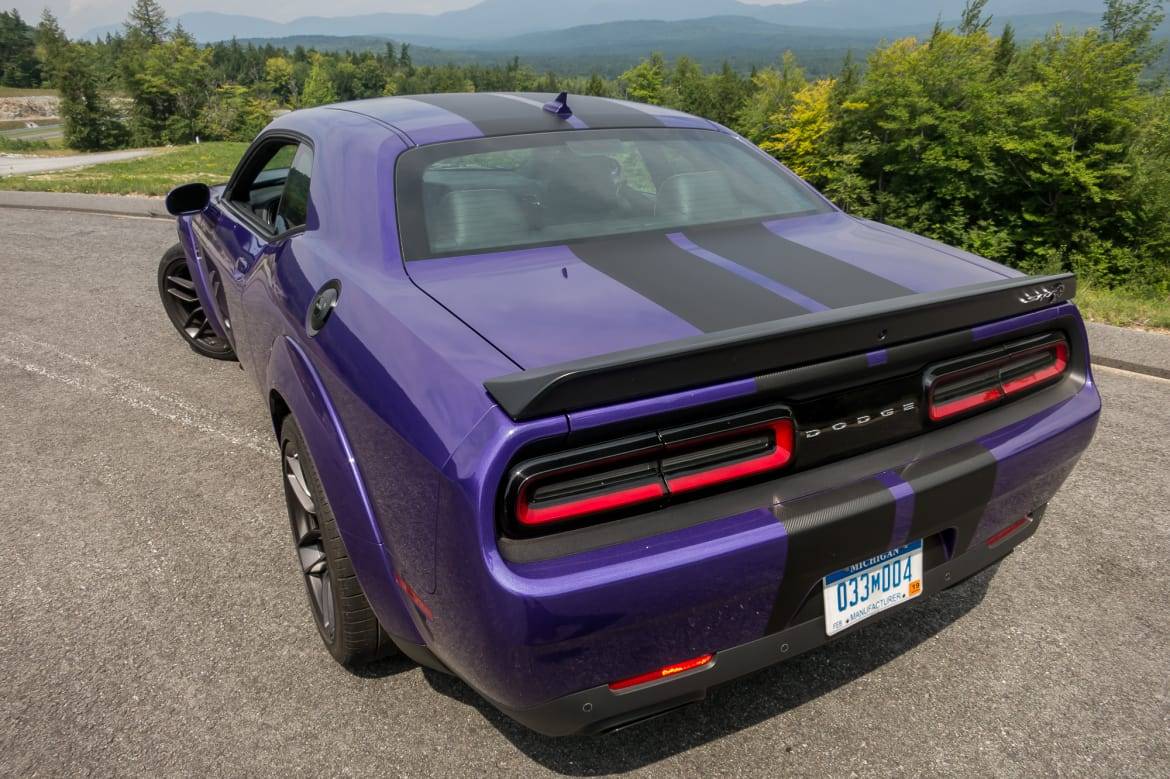 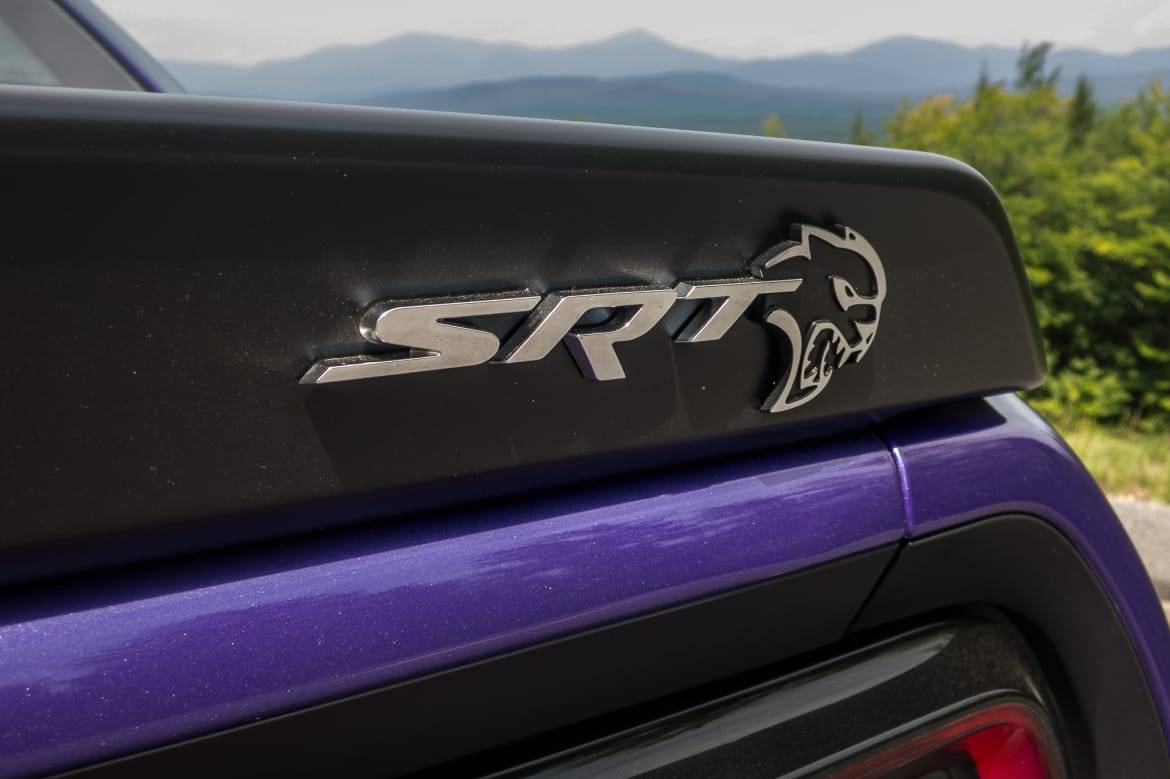 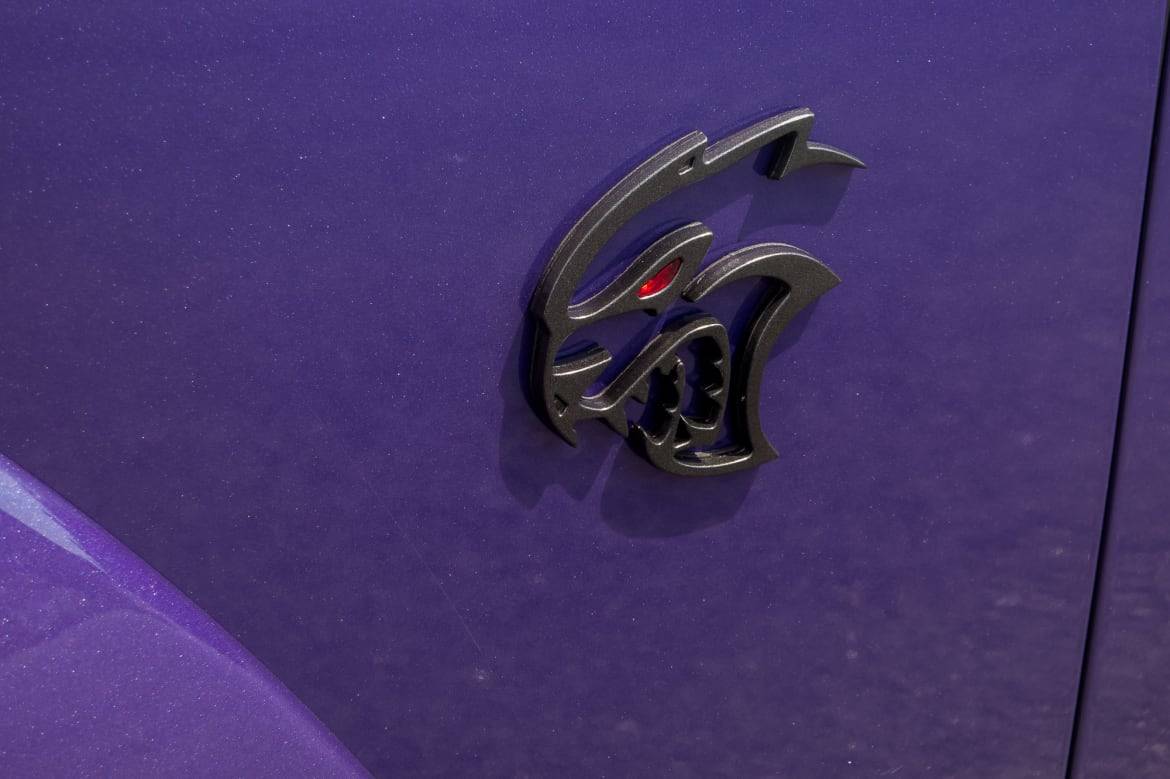 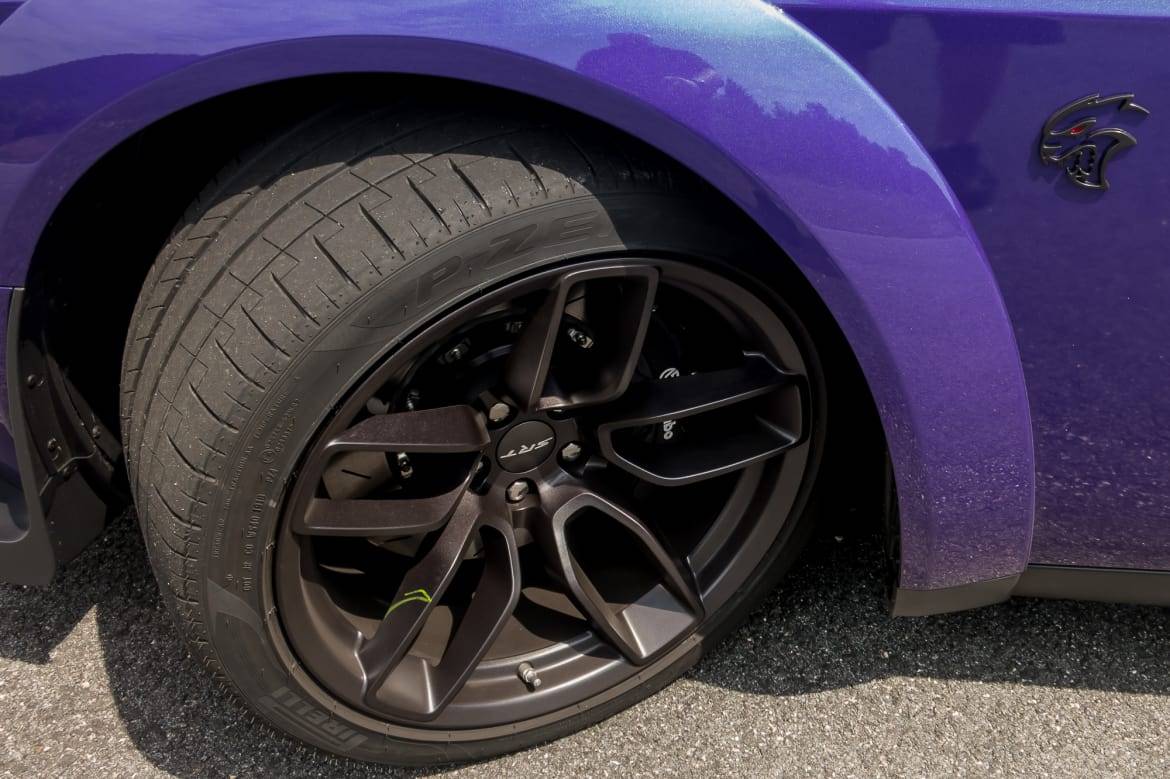 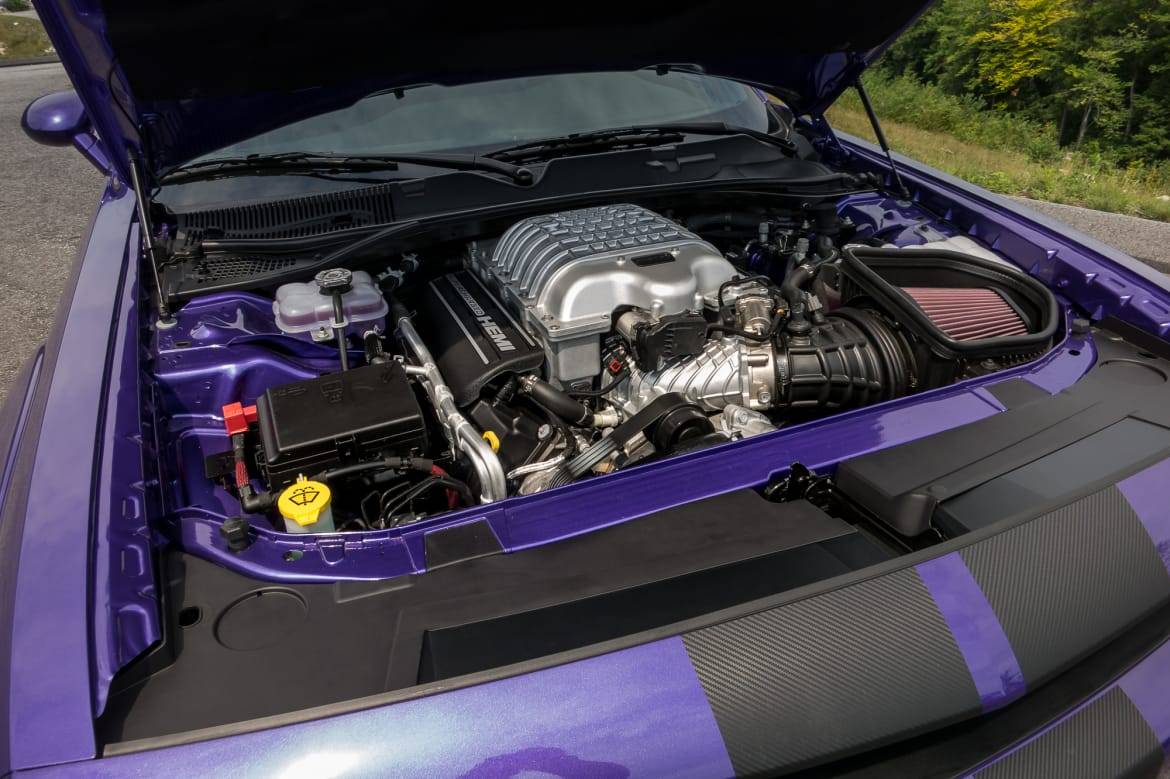 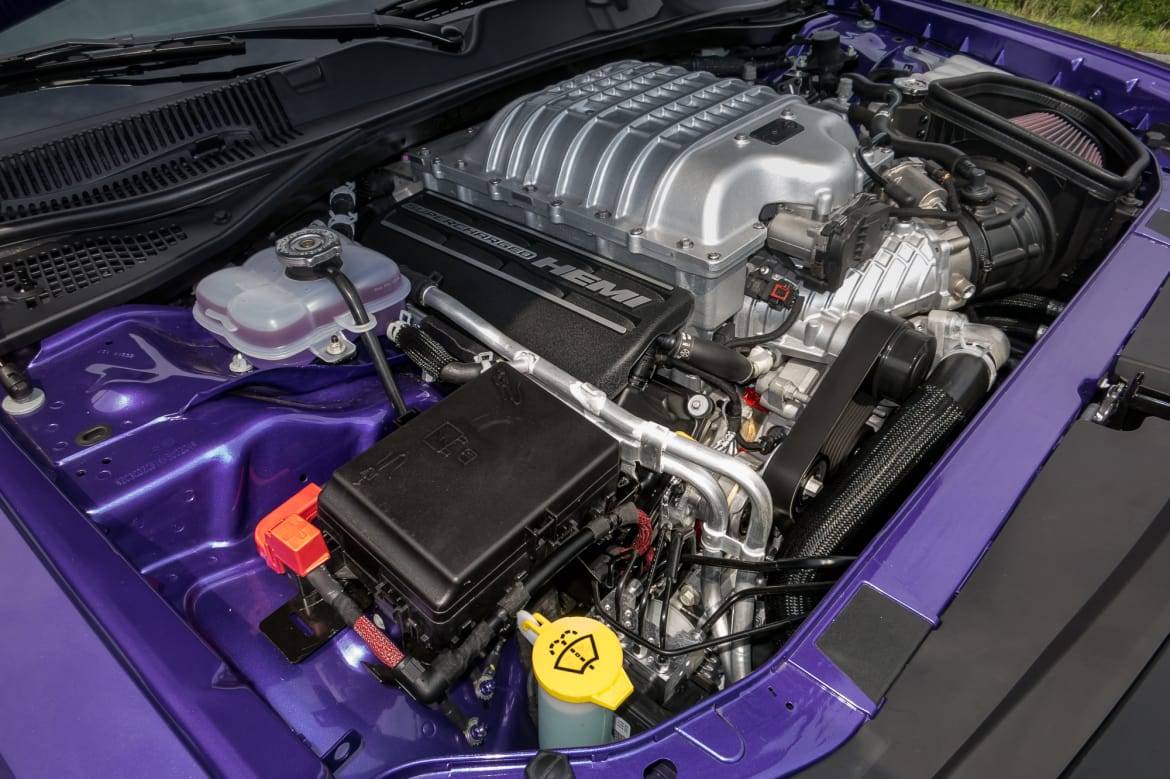 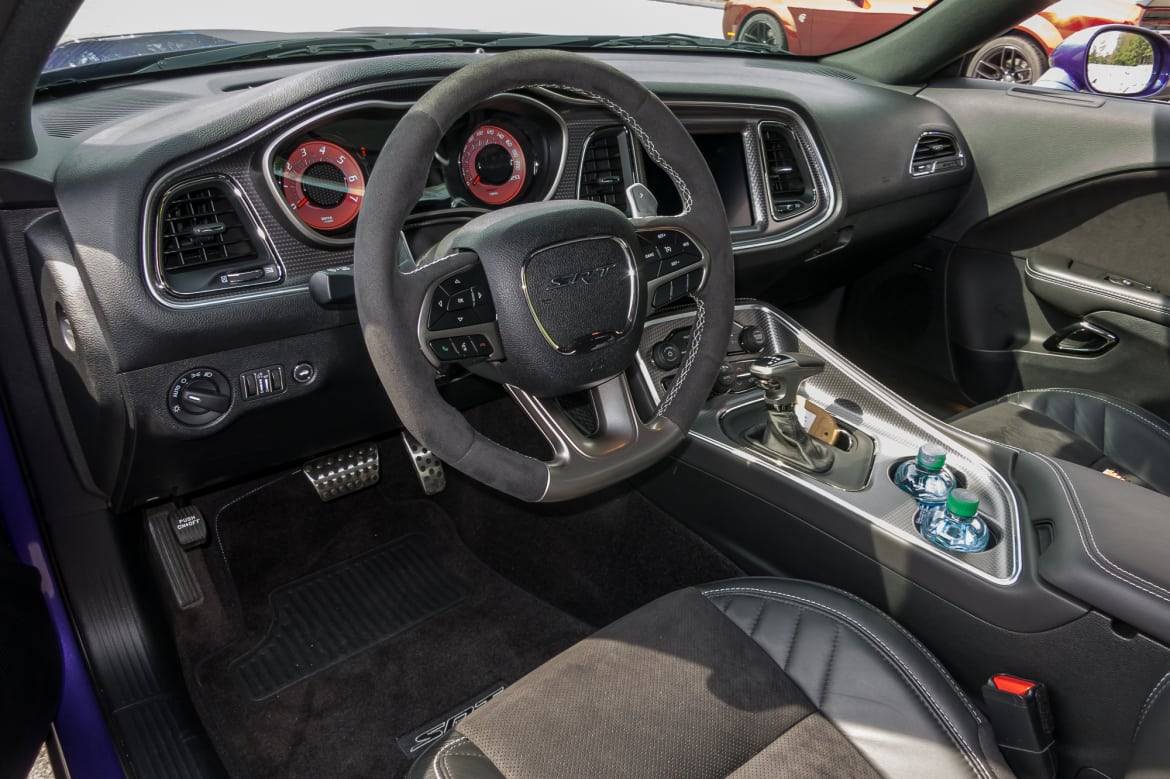 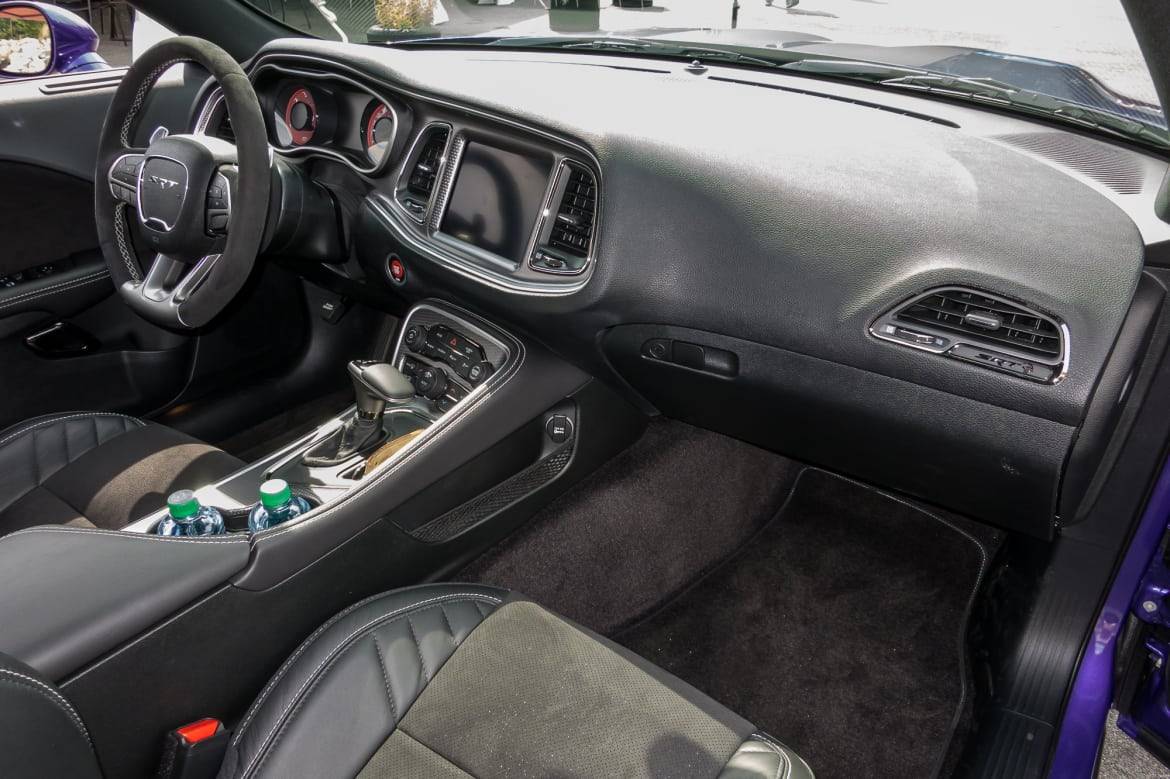 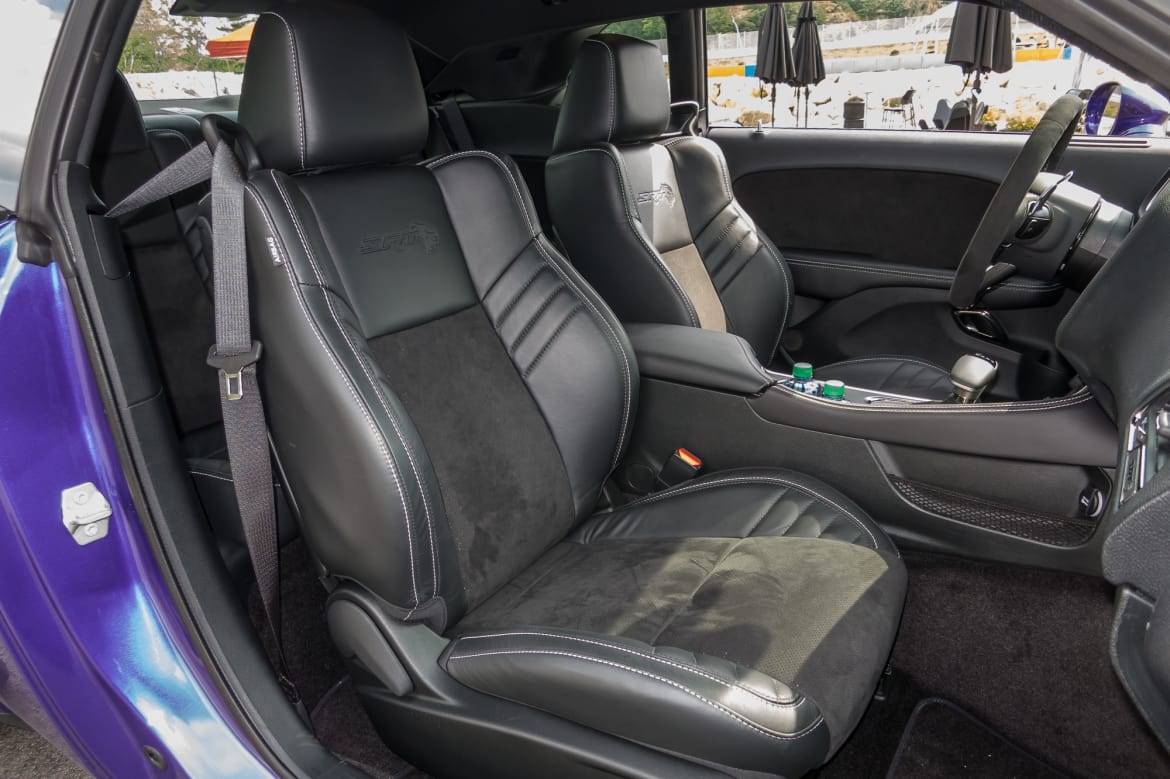 A few weeks ago, Dodge unveiled the latest versions of its Dodge Challenger coupe at a special event at the company’s proving grounds in Chelsea, Mich. It was there that we laid eyes on the successor to last year’s Challenger SRT Demon, the limited-run monster the company created to be the quickest street-legal production car in history. After making 3,300 Demons all told, the run is done — but you didn’t honestly think that Dodge was going to spend all that powertrain development money and not stick the engine into something else, did you?

The Demon Is Dead, Long Live the Redeye

Behold the new 2019 Dodge Challenger SRT Hellcat Redeye! Think of it as a mashup of the best Hellcat bits and the best Demon parts, bolted together in a car meant to tackle a road course instead of a drag strip. Dodge took the heart and lungs out of the Demon and bolted them right into the top Dodge Challenger SRT model with as little modification as possible, stuffing in that supercharged 6.2-liter Hemi V-8 engine and all of the wonderful bits that made the Demon so remarkable, like the charge cooler that operates off of the air-conditioning system. The result is a car that makes 797 horsepower and 707 pounds-feet of torque — and right now you may be going, “Wait a minute, the Demon makes 808 hp — or 840 hp if you’re using the special computer and race gas.” And that’s correct — the Redeye doesn’t make as much power as the Demon did because of more restrictive air intakes.

See, the Demon was tuned to go as quickly as possible in a straight line, and was limited to a top speed of 168 mph, which actually made it the slowest model in the Challenger SRT lineup. Its massive single hood scoop was designed to suck in as much air as possible at lower speeds, but its design was aerodynamically unstable at higher speeds, causing too much lift on the front of the car. So the Redeye’s 203-mph top speed necessitated a different dual-scoop hood, seen on all the new Hellcats, and it restricted the horsepower somewhat to 797. Trust me, you’re not going to miss those 11 horses.

Fast and Furious (and Still a Bit Fat)

Where the Demon was a one-trick pony, meant for quarter-mile drag-strip duty only, the Hellcat Redeye is a far better, more usable, balanced everyday vehicle. You still have the wailing shriek of its enormous supercharger consuming on the order of 5,000 pounds of air per hour at full chat. You still have the crushing acceleration (the Redeye Widebody supposedly runs the quarter mile in 10.8 seconds at 131 mph). You still have the miserable fuel economy of 13/22/16 mpg city/highway/combined (plus a $1,700 gas guzzler tax), and now the Hellcat logo on the fenders is done in low-gloss black with red-jeweled eyes instead of silver and black.

But you now also have the ability to go around corners at blistering speeds thanks to suspension tuning that favors road courses instead of the Demon’s straight-line focus. You now have daily drivability that’s really astonishing — despite the massive power and pounds-feet of torque on tap from the Demon-derived motor, the Redeye still drives as docile as you please around town, with only the constantly boomy exhaust (which gets a little tiresome on highway drives) and mild tramlining behavior if you opt for the expensive Widebody package’s 305-mm-wide tires. The steering feels numb in Street mode and unfortunately doesn’t get any more communicative in more sporting modes — only heavier, requiring greater effort to manipulate and not providing much in the way of feedback.

Power is not a problem in the Redeye. Power is never the problem in any Hellcat unless you’re driving through an ice storm. Over Club Motorsports’ outstanding racetrack in rural New Hampshire, which features a dramatic overall elevation change of 250 feet, the Redeye was strong and fast. Don’t get too excited, however — a Ford Shelby GT350 Mustang would likely wipe the track with any Hellcat due to the Redeye’s prodigious mass and brakes that have a lot of work to do in hauling down all that mass (anywhere from 700 to 800 pounds more than a GT350). Like all of Dodge’s big cruisers, the Redeye is not happiest out on the track — it’s a street fighter, meant to be a stoplight warrior on late weekend nights in the empty industrial parts of your town, where folks challenge each other for bragging rights.

But Big Is Beautiful

So the Hellcat Redeye is still a muscle car, not a true sports car — but at being a muscle car, it truly does excel. It helps to think of the Dodge Challenger as a two-door version of the larger Charger sedan, because that’s really what it is. Park it next to a Chevrolet Camaro or Ford Mustang and it dwarfs the smaller, lighter competitors. Its size is why it’s still the most comfortable of the American muscle cars, with far more interior space than a Mustang and vastly better 360-degree visibility than a Camaro. But it’s also by far the most practical, most usable, most versatile option for someone looking to combine serious speed with semi-sensible transportation.

The backseat is actually usable, unlike the one in the Camaro. The trunk is enormous, with a huge, wide opening that can accommodate several suitcases. The interior materials are of decent quality and feature a lot of fun retro touches like the old-style font on the round gauges and a dashboard that’s a clear homage to the 1971 model. As always, the Fiat Chrysler Automobiles Uconnect system remains a model by which other multimedia systems can be judged — its easy connectivity, clear screen and simple organization keep it ranked near the top of our list of best onboard electronics.

The 2019 Challenger SRT Hellcat is not exactly priced to sell, but it’s still something of a performance bargain. The least expensive Hellcat you can buy starts at $61,745, including a $1,700 gas-guzzler tax and a stunning $1,395 destination fee. But the Redeye adds $11,000 to that total, and opting for the Widebody kit can add another $6,000. Getting into a fully loaded Hellcat Redeye Widebody with all of the fancy leather and electronics will set you back more than $87,000, which is a lot of money for a Dodge Challenger.

The new Challenger SRT Hellcat Redeye doesn’t really feel that much different from the regular Hellcat, it just offers up some more power and bragging rights for 2019, along with a slightly different look and a few new colors. It definitely belongs in a class of its own, but it’s a class we truly enjoy attending now and then.

Do You Need an All-Wheel-Drive Minivan?