Those questions get to the brass tacks of self-driving cars. In our ongoing series on autonomous car technology, we’ve asked what makes a self-driving car, looked at  some autonomous features that already may be in your current set of wheels, considered some of the barriers to self-driving cars and explored the future of vehicle autonomy.

Now we’ll assessing which automakers offer autonomous-vehicle building blocks. Features such as self-park steering, adaptive cruise control and lane-centering steering rely on sensors earlier cars didn’t employ, and are considered foundational. They automatically accelerate, brake or steer in certain driving situations but still require the driver for some or all other tasks, or to intervene when needed. The next step toward autonomous cars will be tech that does all three — accelerate, decelerate and steer — but with the driver keeping an eye on the road and other cars and taking over when necessary. Only a few automakers now offer these systems such as Audi’s Traffic Jam Assist. Beyond that would be a full autonomy, but no automaker offers this in the U.S. yet.

Where does each automaker stand on these self-driving features? Read on.

Every BMW except the Z4 and i8 offers at least some degree of automation through the automaker’s self-park steering and, in most cases, adaptive cruise control.

For two BMWs — the 7 Series and the electric i3, both self-parking cars — the available park system (primarily for parallel parking with the driver onboard) automates the steering and the accelerator and brakes. The automaker’s Traffic Jam Assistant, meanwhile, includes lane-centering steering and full-speed adaptive cruise control with stop-and-go functionality.

What’s next? BMW says the industry is on the cusp of “highly automated driving” but didn’t provide a specific timetable for when it would reach that.

FCA says the following cars have adaptive cruise control, self-park steering or both.

What’s next? FCA announced plans on May 3 to build with Google a test fleet of self-driving Chrysler Pacifica Hybrid minivans. It’s a joint effort for both that could bear self-driving fruit down the road, but Google’s self-driving Pacificas won’t be for consumers.

Ford’s self-parking steering — among the first such mass-market systems — can park by steering the car into a parking spot while the driver works the brakes and accelerator. Ford and its Lincoln luxury division offer adaptive cruise control and/or self-park steering in these cars:

What’s next? Ford is developing a feature called Traffic Jam Assist that will combine lane-centering steering — not just lane-departure prevention, which the automaker already offers — with full-speed adaptive cruise control. Traffic Jam Assist will arrive in the next three years, Ford technology spokesman Alan Hall said. Ford is working on a self-parking feature that works the steering, accelerator and brakes to maneuver into a parking space.

The automaker also has a development program working to deliver “fully autonomous capability that takes the driver out of the loop,” Hall said.

What’s next? GM’s forthcoming Super Cruise system will accelerate, brake and steer, and in certain highway situations it won’t require you to hold the wheel periodically, as virtually all lane-centering systems do now.

Honda includes lane-centering steering and adaptive cruise control with its Honda Sensing and AcuraWatch packages, respectively. (Acura is Honda’s luxury division.) These packages are offered on a wide range of cars:

“That starts to solve problems that allow you to get off freeways and really safely manage intersections, because that’s the big challenge,” he said. “It’s a combination of big challenges. It doesn’t mean no one will do it without V2I [communication]… but I generally feel like that’s a critical step to get it to true mass market.”

True self-driving cars will arrive “before 2030, but maybe pretty close to it,” Grover said.

What’s next? Self-driving technology doesn’t seem a huge priority for Mazda. The automaker has “safety technologies that align with autonomous cars,” spokeswoman Tamara Mlynarczyk said. “But those are designed to complement the driving experience and not supersede it. We continue to develop technologies that complement the Mazda philosophy of bettering people’s lives through bettering the experience from behind the wheel.”

Self-park, which steers but doesn’t control the accelerator and brakes, is available on “almost all of” the current lineup, Mercedes spokesman Christian Bokich said.

What’s next? Mercedes’ redesigned 2017 E-Class will offer a parking system that enables the car to steer, brake and accelerate out of a parking spot; Bokich said it also will offer extended periods of hands-free steering, conditions permitting.

What’s next? “Within the next couple years we expect to launch a system that has your hands-off capability,” said Andy Christensen, a senior manager of Intelligent Transportation Systems Research at Nissan’s Technical Center North America.

At this time, Tesla’s Autopilot feature combines adaptive cruise control with lane-centering steering that requires minimal driver involvement, though currently encourages drivers to keep their hands on the wheel. Fully electric Teslas receive operating system updates, wirelessly, enabling the refinement and addition of features. Autopilot is available on any Model S manufactured since September 2014, when all the sensors and associated hardware became standard equipment, and the Model X, both currently on sale.

What’s next? Tesla CEO Elon Musk reportedly has said the automaker plans to have “fully autonomous” cars in less than three years.

Toyota’s Lane Trace Control operates as lane departure steering. Toyota called it as a lane-centering approach in 2016 but later backed off that characterization, saying its active steering systems only mitigate lane departure.

The Volkswagen Group also includes the Audi and Porsche brands. Here’s a rundown of what VW and Audi confirmed. Porsche did not respond to our inquiry.

Audi offers Traffic Jam Assist, which has both lane-centering steering and adaptive cruise control. “If you take the Traffic Jam Assist — I think that’s the best example — we have control of accelerating, braking and steering,” said Thanh Uy Phan Tan, an electronic strategy specialist at Volkswagen. Traffic Jam Assist is offered on:

What’s next? Full automation is “going to be, at the beginning, probably limited to certain scenarios,” Phan Tan said. “Like, there’s a Traffic Jam Assist that would apply to that kind of conditional automation. That would be in a lower speed but very structured kind of condition.”

Brad Stertz, Audi’s director of government affairs, said he believes the next-generation A8 will introduce more automated driving technology in a production car, allowing the driver to take their hands off the wheel in some circumstances.

Pilot Assist that combines lane-centering steering with adaptive cruise control and operates up to 30 mph:

What’s next? Volvo spokesman Jim Nichols said the automaker will increase Pilot Assist lane centering to 80 mph on the 2017 XC90, and the S90 — Volvo’s replacement for the S80 — will get Pilot Assist standard. (It currently only works at slow speeds on the 2016 XC90.) Nichols claims the S90 will be “actually the first car in the world to have this semi-autonomous technology as standard.”

Meanwhile, the automaker plans to allow consumers to test dozens of XC90s outfitted with self-driving technology on specified highways in its native Sweden, with the aim to allow drivers to divert their attention elsewhere while the car drives. Volvo calls it the Drive Me project. Volvo wants to conduct similar tests in China and the United Kingdom; it also has “a very strong interest in doing it in the U.S.,” Nichols said.

A Mitsubishi spokesman told us the automaker didn’t have much to offer in the realm of autonomous driving, and representatives from Subaru did not furnish any specifics in response to our request.

Jaguar Land Rover did not provide details for its current lineup, but spokesman Nathan Hoyt told us the automaker plans to “have something autonomous” in the next decade.

Editor’s note: This post was updated on March 21, 2017, after Toyota and Hyundai changed their prior assessments of lane-centering steering. 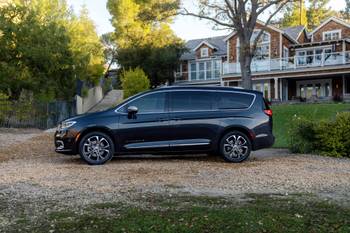