CARS.COM — You don’t have to be a soccer mom or dad to know that minivans are tops when it comes to helping with family life. Whether it’s hauling what seems like the entire neighborhood for the school carpool or just heading on vacation with the whole family and their luggage, pillows, snacks, toys …

Results | Child-Safety Seats | What You Get in the Ultimate Minivan

In our Champions Versus Challenger series, we take the winner of a previous Challenge and pit it against the class sales leader and any new contenders. For this round, we’re revisiting the minivan class: In 2015, we crowned the Kia Sedona the best minivan for 2015. In second place was the Toyota Sienna, the minivan sales leader. Rounding out our Champions Versus Challenger testing is the all-new 2017 Chrysler Pacifica. 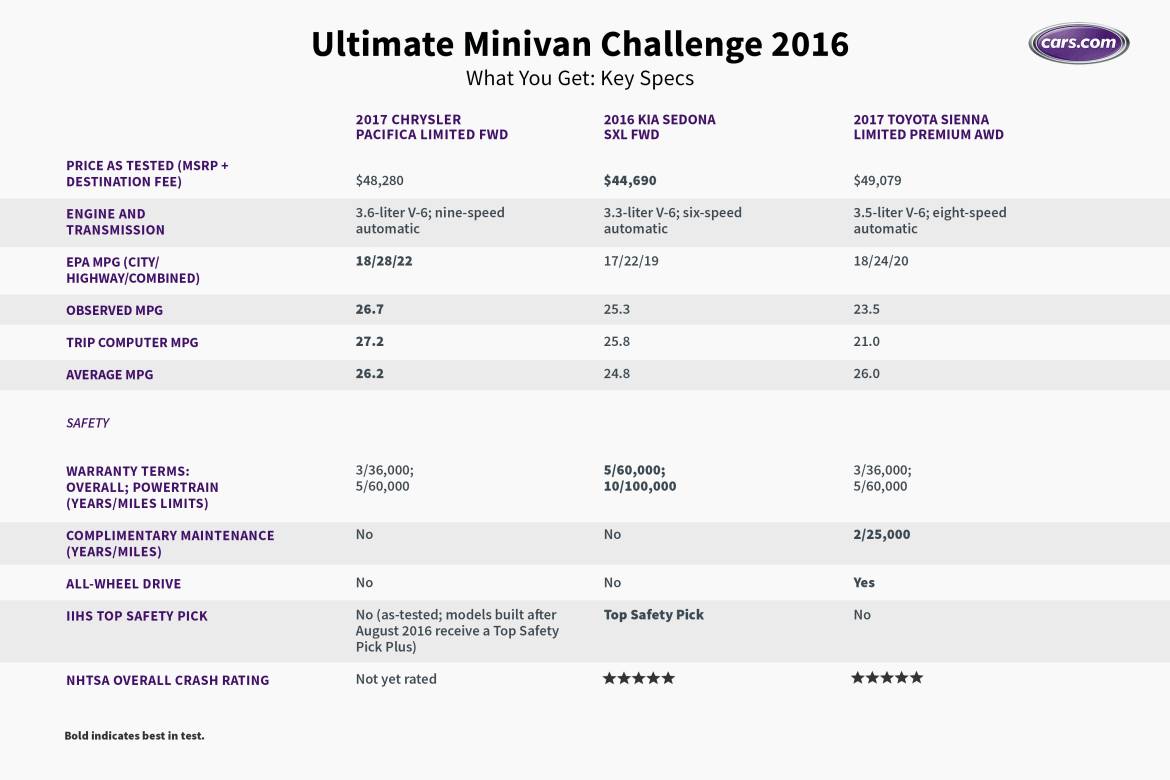 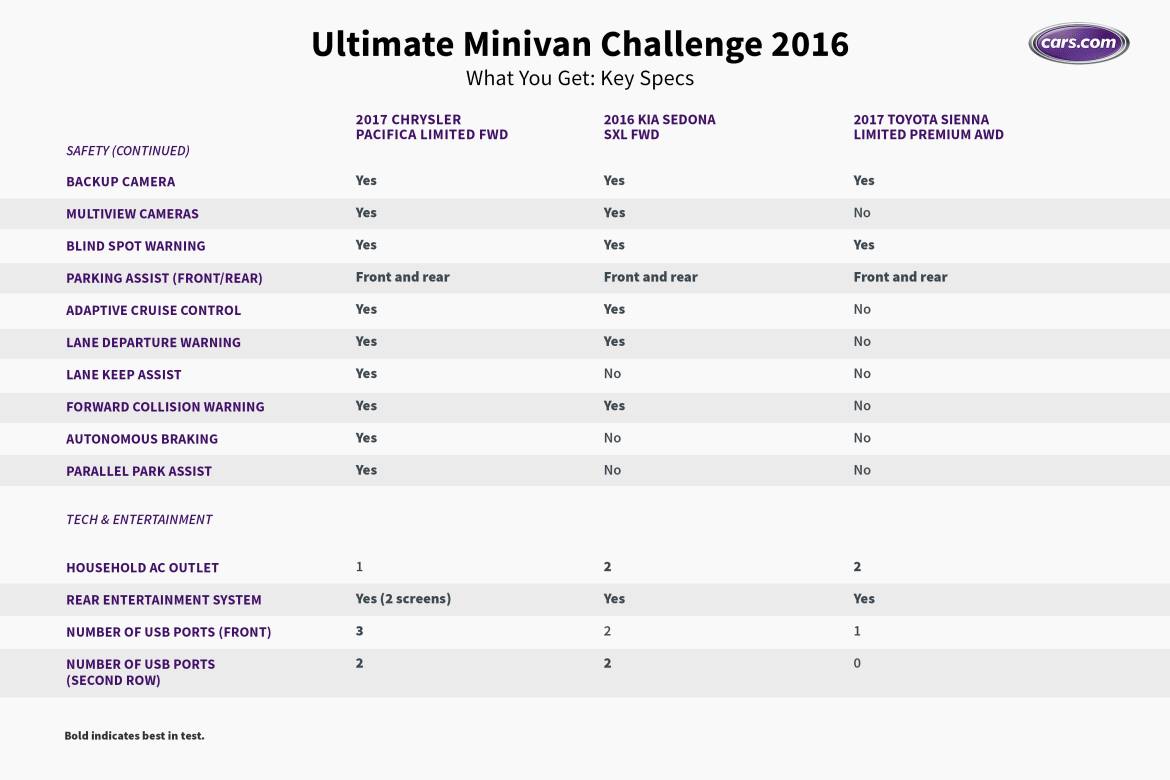 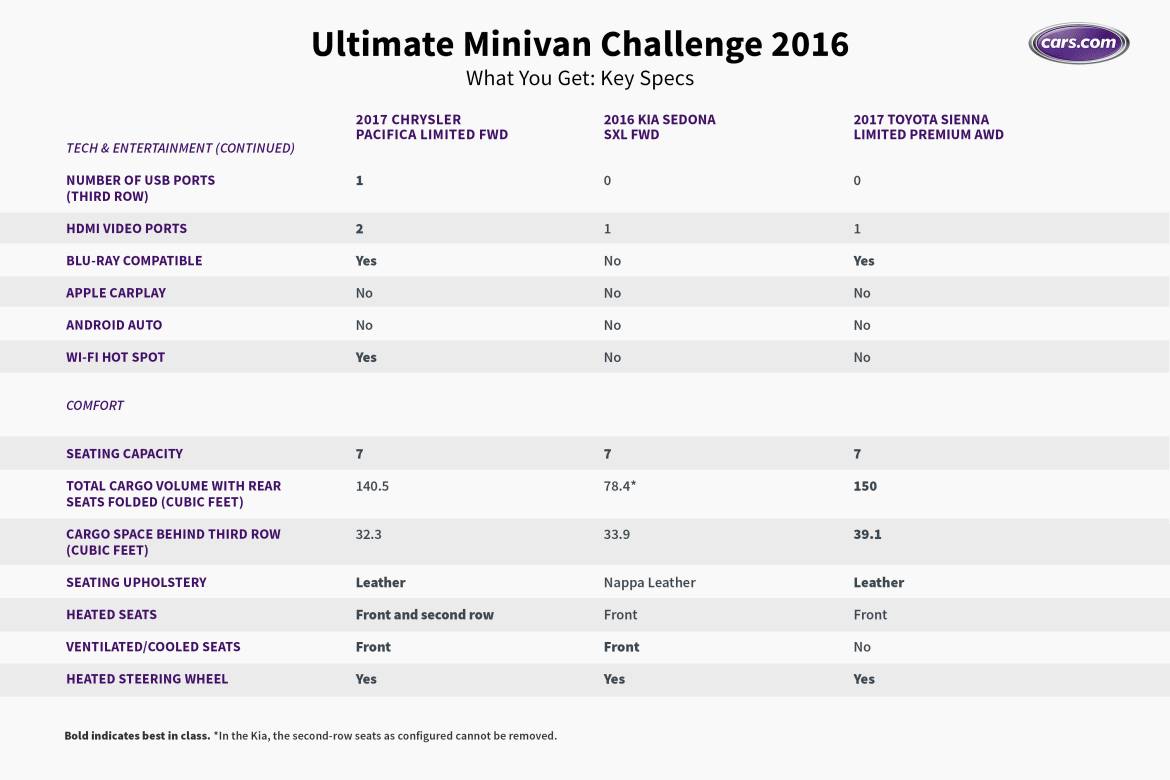 Each of our contenders had a navigation system, a backup camera, heated front seats, a heated steering wheel, rear climate controls in the second row and rear vents in all three rows of seats, a power liftgate, power sliding doors, a conversation mirror (the better to keep an eye out for any shenanigans) and a smart entry system.

Family life often involves lots of gear, whether it’s a stroller and diaper bag for wee ones or bags and bags of sports gear for tweens and teens. For the family chauffeur, aka Mom and Dad, why not make all that time behind the wheel more comfortable with ventilated front seats? In our test, the Pacifica and Sedona both had the feature.

For those colder mornings, the Pacifica was the only minivan in our test with heated second-row seats, or butt-warmers, as my 9-year-old calls them. All three minivans were loaded with cupholders and bottleholders throughout the cabin, but only the Sienna offered a whopping 14 of them. The Sedona had 12 and the Pacifica, 10.

The Pacifica was the only minivan in our testing with an in-van vacuum. Any parent can see the appeal of this feature, but in our testing, we managed to clog the hose while attempting to suck up a pile of Goldfish crackers.

The Sienna’s ultra-family-friendly feature was Driver Easy Speak, which uses a built-in microphone to amplify the driver’s voice through the rear speakers for third-row passengers. One small problem with Easy Speak is that the kids’ voices aren’t amplified, though nature seems to help them out in that regard.

All three minivans had dual moonroofs, but the Pacifica took this feature to the next level with a panoramic moonroof over the first and second rows and a smaller moonroof for the third-row passengers.

The Pacifica wowed our judges with its rear entertainment system. The Uconnect Theater has a screen on each front-row seatback, and the lucky kids in the second-row seats have their own Blu-ray player with remote, HDMI inputs, USB ports, headphone jacks and wireless headphones, too. And did we mention the in-system games such as checkers, tic-tac-toe and more? They can play these games on their own or against each other and it’s sure to help while away the time during a long road trip.

The Sienna also had a Blu-ray player, SD card slot, USB ports, and RCA and HDMI inputs for its 16.4-inch screen that flips down from the ceiling. Two videos can be displayed side by side on the widescreen, a boon for family harmony — as are the two wireless headphones included with the optional entertainment system.

Bringing up the rear on the entertainment front was the Sedona, with its single screen that flips up from the back of the center console. It has USB ports, an AC outlet and a mini HDMI input. Wireless headphones also are included as part of the optional system.

None of the minivans in our test offered Apple CarPlay or Android Auto. The Pacifica was the only contender to have a Wi-Fi hot spot, which is sure to be a hit with connected teens (and their parents) who stream nonstop.

When you’re hauling precious cargo like children, safety features and crash-test scores are important. The Pacifica earned the Insurance Institute for Highway Safety’s highest honor of Top Safety Pick Plus. That award, however, is only given to Pacifica models built after August 2016 when Fiat Chrysler Automobiles added structural reinforcements. Our test Pacifica was built in July 2016, so it didn’t qualify for the top honors. When shopping for minivans, or any other car, check for the build date on the driver’s doorjamb sticker. The Sedona received the second-highest rating of Top Safety Pick and the Sienna didn’t earn either honor.

All the minivans had blind spot warning, a must-have on cars this size, front and rear parking assist, and backup cameras, with the Pacifica and Sedona supplementing those with multiview camera systems.

Adaptive cruise control: Only the Pacifica and Sedona had this safety feature that maintains a set speed and distance from the car ahead of it.

Autonomous braking: This system can apply the brakes if the driver doesn’t when it senses slowed or stopped traffic; only the Pacifica offered it in our test.

Forward collision warning: This system alerts the driver of an impending collision, and the Pacifica and Sedona had it.

Lane departure warning: Both the Pacifica and Sedona had this safety feature that alerts the driver when they drift out of their lane.

Lane keep assist: Only the Pacifica had this active safety feature that gently steers the car back into your lane should you drift out of it.

Of our Challenge contenders, the Sedona was the lowest priced, but the Pacifica offered the most bang for its $48,280 price. Find out if the Pacifica drove off with the ultimate minivan for 2016 title or if one of its challengers beat it to the finish line.