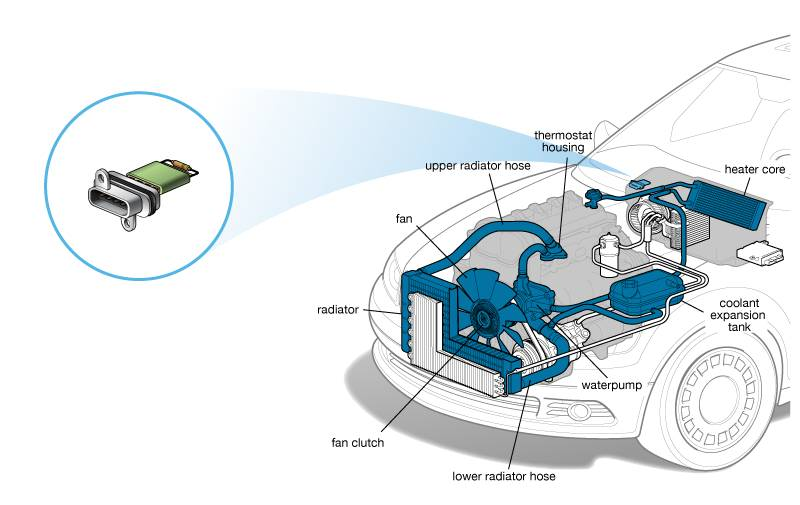 The heater blower motor reduces or increases the amount of air blowing through the dashboard vents based on the fan speed selected or, in an automatic climate control system, the interior temperature and other factors. But resistors, small electronic parts tucked out of sight, are what actually control the fan speed by reducing the amount of electrical current going to the blower motor. When everything is working properly, setting the fan speed at its lowest setting, for example, will tell the resistor to restrict the amount of current to a low level. But if the resistor burns out or wears out from corrosion, there is nothing to reduce the amount of voltage going to the blower motor for the lowest fan speed, so it will most likely get the maximum current and run at full speed. When a resistor fails, the fan will often run only at higher speeds or the highest speed, no matter what fan speed is selected. In some vehicles, though, the fan may not work at all, and only a little may come through the vents. If little air is coming through the vents (hot or cold), then it could be because the blower motor for the fan or a switch or resistor that controls fan speed isn’t working. Another cause might be that the electronically controlled “blend doors” that direct air flow are stuck or broken. The fan switch may be at fault, but a more likely reason is that a blower motor resistor that controls the voltage going to the blower has packed it in, resulting in only one speed remaining operable – usually the highest speed. When a blower resistor fails, the highest fan speed usually is the only one that still works because it essentially bypasses the resistor and receives the maximum amount of voltage. When the resistor is working, it reduces the amount of voltage going to the lower fan speeds so the fan runs slower. Blower resistors are small parts that can become corroded or just burn out, and a new one often costs less than $50. Because they’re usually under the dashboard on the passenger’s side or behind the glove box, near the blower motor, they can be hard to reach if they need to be replaced. Though having only one fan speed usually indicates a bad blower resistor, diligent mechanics will test the resistor, fan switch and connections to the blower motor to make sure before they start replacing parts. If none of the fan speeds work, then checking the fuse or fuses for the heating, vent and air conditioning systems is a logical first step.