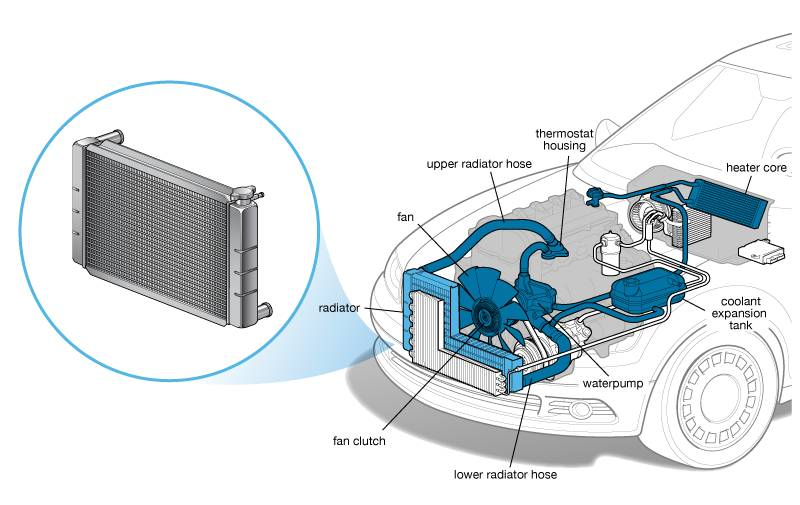 The radiator is Grand Central Station for an engine’s cooling system: The mixture of antifreeze and water that cools the engine continually passes through the radiator, where it discharges some of the heat it picked up from the engine and takes in cooler air before circulating again through passages around the engine. A spur line sends warm coolant to the heater core to generate heated air for the interior when needed. A water pump circulates the coolant around the engine, and a thermostatically controlled fan behind the radiator turns on as needed to draw more air through the radiator to help cool the antifreeze/water mixture. Though most modern radiators are made of aluminum and plastic and are generally thought to be rust-resistant, the metal can still corrode. Antifreeze contains rust inhibitors that break down over time, allowing corrosion to damage cooling fins inside the radiator and rust to eat through from the inside and cause leaks. Some radiators also have plastic parts that can develop cracks and leak. That is why many vehicle manufacturers recommend changing the engine coolant and flushing the system periodically, though in some cases that isn’t for 100,000 miles or more. Some manufacturers say the coolant never has to be changed and only the coolant level needs to be checked periodically. Repair shops can test coolant for corrosion resistance and for protection against freezing. Debris such as dirt, leaves and plastic bags can collect on radiators and reduce their cooling ability. Hoses connected to the radiator and radiator caps also can develop leaks, and thermostats that regulate coolant flow can fail. Having a repair shop do a full cooling system inspection should be part of regular maintenance on vehicles more than five years old or that have more than 50,000 miles on the odometer.