See all 110 vehicles from this dealership.

This seller has been on Cars.com since December 2020.
Mike Morgan Hyundai is a new pre-owned and Certified Hyundai dealership. We are here for all of our service oil change parts and tire needs. We can help find the perfect vehicle for you and your family quickly and hassle-free. Here at Mike Morgan Hyundai we want you to enjoy your experience and love your new vehicle. Come see us today!
Experience the Morgan Difference! 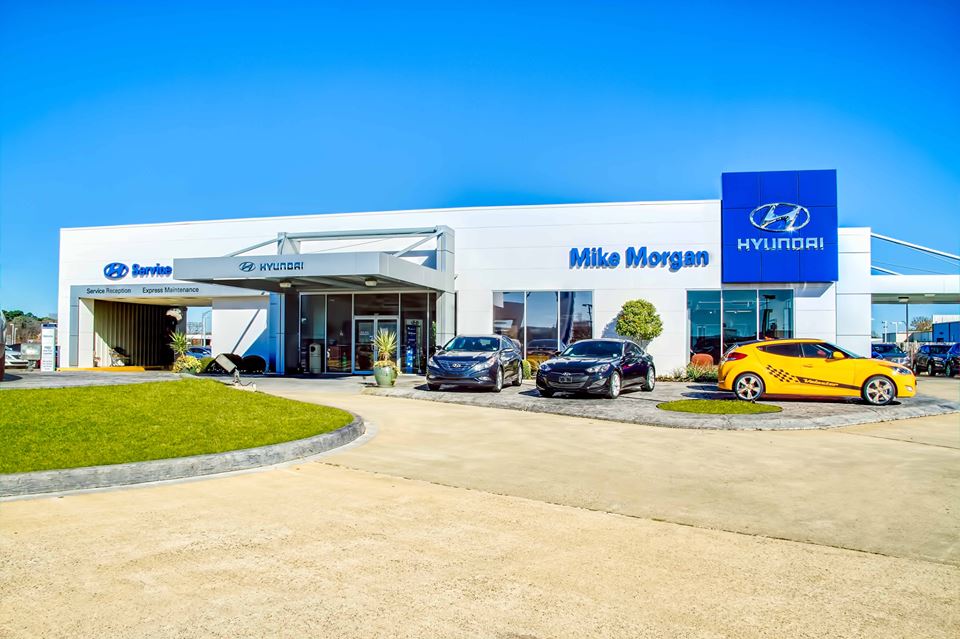 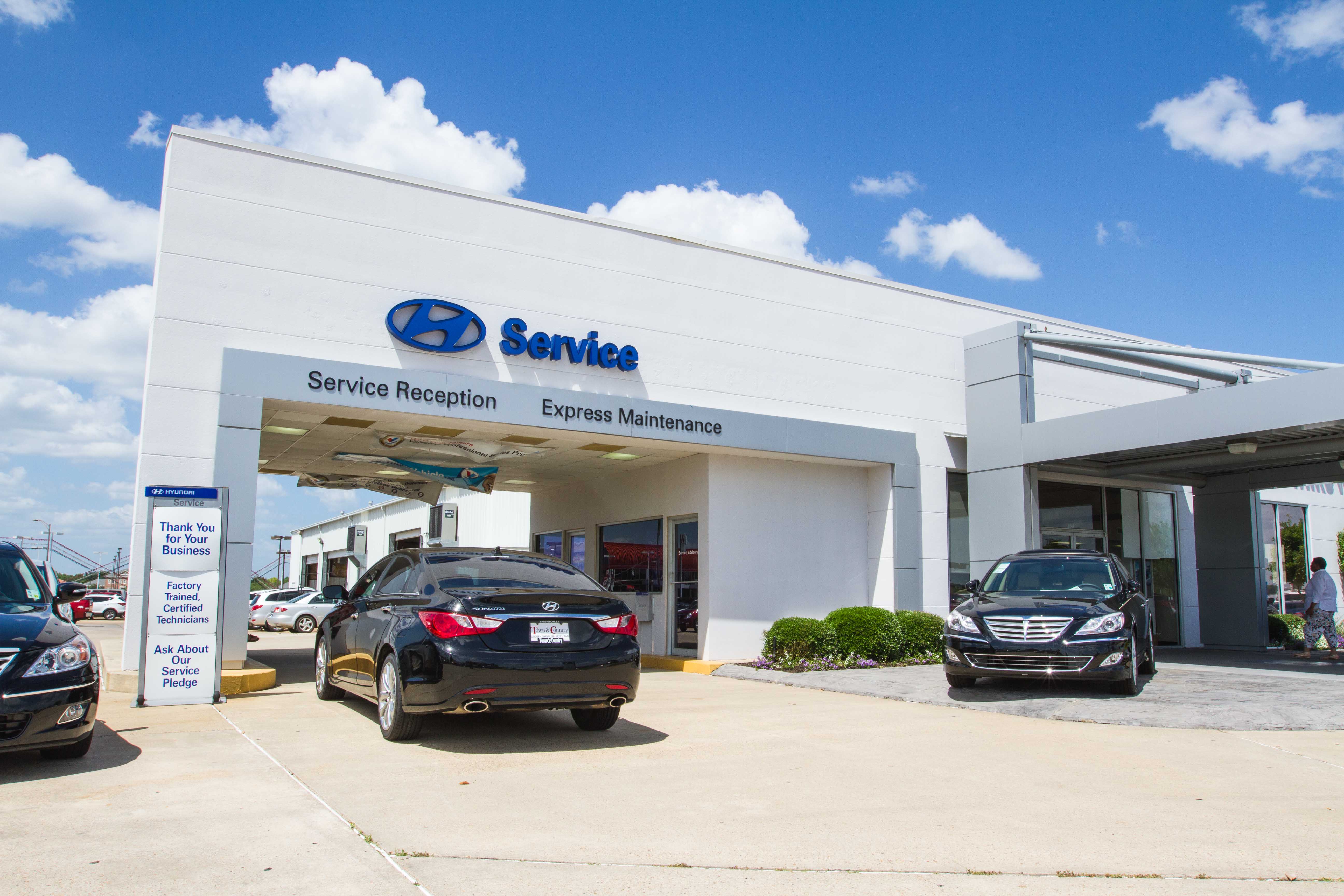 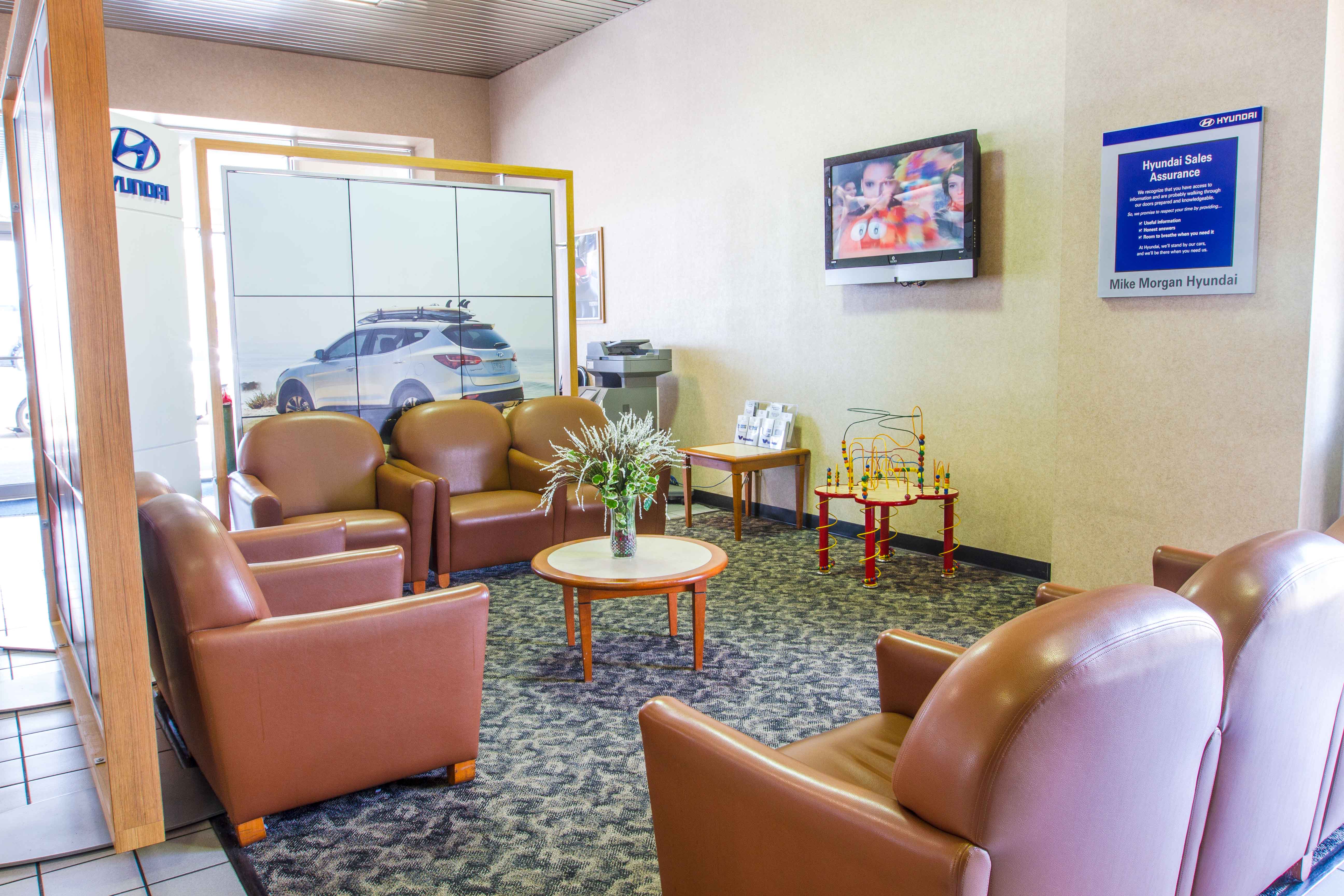 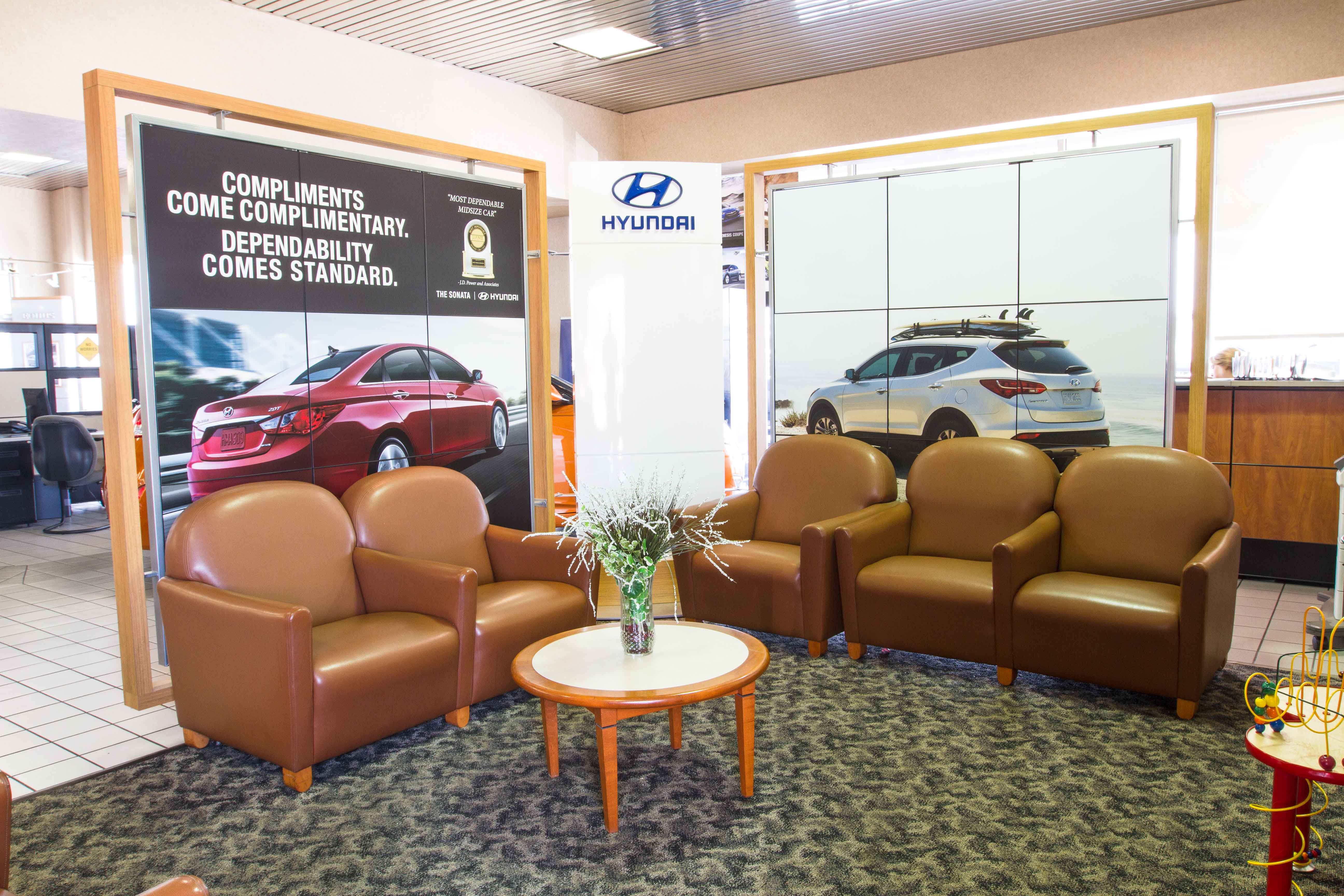 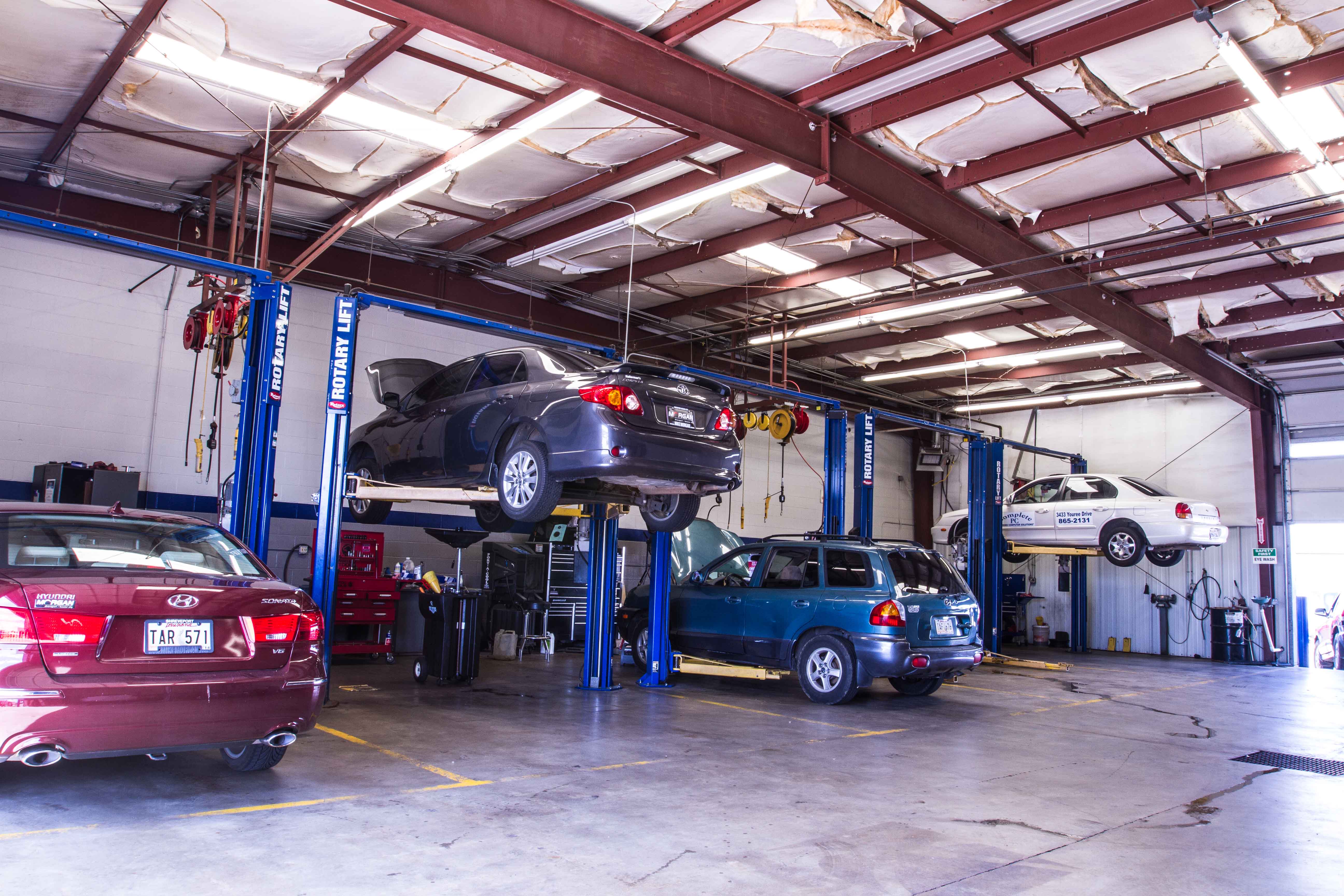 Terrible customer service skills in the service department. I would not recommend. They’re nice when you’re buying a car of course, they want your money. After that, they could care less. They’re very rude people. I do not recommend.

August 2, 2022
By Brian Hunter on DealerRater

Johnny Falcon is awesome. He is the nicest and most informed salesman I have ever had the pleasure to deal with. If yo need a vehicle new or used he is THE MAN.

BUYERS BE AWARE! SHADY DISHONEST DEALERSHIP! I purchased a 2022 Genesis GV70 on June 27, 2022 and purchased all the bells and whistles to include extended warranties and other protection packages, expecting to have my car serviced locally and for FREE for the next three years per their contract. Yet I received a letter two weeks later from their Vice President Mr Marcott, stating that they no longer sell or service Genesis and in order for me to get service done on my vehicle, I have to go to Irving or Plano, Texas or Jackson, Mississippi or Lafayette, LA. That meant that I would have to put over 600 miles on my car and drive 6-10 hours just to get my oil changed or warranty service done!! I was not happy about this and I called to speak to Mr Marcott. As soon as I complained about the situation he hung up on me. I called him back and asked if that’s the way he deals with his customers and he bluntly said “yep” and acted like there is nothing wrong with the way he behaved and spoke to me! They truly pulled a “bait and switch” on me and their other Genesis customers. They knew in May2022 that Genesis was pulling away from Hyundai and they chose not to disclose that fact to me and give me a chance to decide to buy the car knowing that it was not going to get serviced locally. He claimed that just like other “exotic auto” owners I should expect that. First of all, I owned real exotic cars and if they were not serviced locally I knew that ahead of time and chose not to purchase them. I think their lack of full disclosure and their dishonesty makes them one of the worst dealerships I have ever dealt with and WILL NOT buy another vehicle from this shady Mike Morgan auto dealer ever again. Good luck to whomever else who has bought a vehicle from these crooks.

I had plans to purchase a Hyundia Santa Fe from Mike Morgan/dealer so I applied for a new car loan ($20,000). I was disappointed that I was rejected. I have a credit score of 816 and my wife 808, we have no debits. My wife and I have incomes from SS and others. There is more... I will solicit Why? I think the reasons for rejecting my application is deeper than I anticipated. "Your heart is not right" Acts 8:21

Very disrespectful staff, the manager is not avail

If I could give zero stars I would have done it. Worst customer service and worst car service ever. They just want your money, they make all kinds of promises that they will not keep. If you try to have service on your car after you buy it from them, good luck. They will give you an appointment then cancel it without telling you. They will tell you we have no one available to fix your car.

I inquired about a vehicle based on a price listed and...

I inquired about a vehicle based on a price listed and was told that they would be adding a $1500 addendum to the listed price.

Mike Morgan Hyundai, I wanted to share my recent experience with your dealership. On May 27th, 2020 I discovered a 2011 Chevrolet Suburban on Cars.com. I reached out via the website and contacted the dealership website directly. Within a few hours I received an email, text message, and voicemail from David York (Salesman). Within a few conversations and text messages, David advised the Suburban was still available and was sold as is. I asked David about the price and he advised the manager had already marked down the vehicle for the Memorial Day weekend and there was no room for negotiation. I advised I was ok with the price and would like to continue forward with the purchase process. Around 11:37 am (05/27/2020) David told me over the phone that I would need to place a deposit on the vehicle in order to hold it, keeping it from being sold prior to my arrival. I agreed that was fine and then continued with the credit application process. I was sent an email from the finance guy around 1:02 pm, advising I was approved for the sale and we could move forward. Around 2:07 pm I texted David York if there was any update on the completion of the sale. York responded an hour later saying, “Yes, my finance manager is going to call you in a moment”. At 7:00pm I texted again about when the finance manager would contact me. NO RESPONSE that day!!! I could have driven down that evening, from Little Rock, to pick up the vehicle. If they would have responded to my calls and texts. Meanwhile, I have submitted everything needed and had completed everything possible on my end. I had already been told the sale was practically final and I still needed to leave a deposit. At this point, being a single father with three kids, I told David I now would not be able to get the vehicle until after the holiday weekend (06-01-2020). I’d would have like to have picked it up that evening, but they would not respond to texts or phone calls. Friday May 28th, 2020, still no word from the dealership. I noticed at this point according to Experian, they had ran a hard credit on my report with various car lenders. I texted David York at 12:21 pm, advising I still have not had any contact from the finance manger. David York then called me back and began to explain that he spoke with the owner, and they would not hold the vehicle for me, even with a deposit. I asked if I could compete the paperwork remotely and sign upon arrival, pay any down payment, etc. David said he would speak with the owner and call me back. Eventually, David called me back and said after speaking with the owner, they decided they would not do anything to help and they would continue to sale the vehicle to whomever comes over the holiday weekend. David York had already told me, prior to running a hard hit on my credit, I could pay a deposit and hold the vehicle until I responded on 06-01-2020. David said the owner would not allow what they said is the normal practice, of holding a vehicle with a deposit. I was not asking for any discount, agreed to pay whatever money down, agreed to full asking advertised price, and willing to drive 3 hours to pick up the vehicle. David said the vehicle had no interest so far and it would not sale anyway, because of the age and buyers needing great credit to be approved for it. David said don’t worry, I’ll notify you Saturday if it sales. I was not happy but I could not force a dealership to honor their word and do the right thing, so I waited. Saturday May 29th David York texted me at 7:08 pm, “Sorry someone bought the suburban today”. Thank you Mike Morgan Hyundai for wasting my time, lying to me about paying a deposit, putting a hard hit on my credit, and confirming how most already fell about shady car salesman.

Mike Morgan Service Department sucks and they make up...

Mike Morgan Service Department sucks and they make up issues with your car that does not exist. The buying process was a smooth and an enjoyable experience, but the service department makes me regret ever buying with them. They lie about things wrong with your car. I took my car to them last year and they gave me a full list of issues and this year they said I did not have any issues that I mentioned and they acted clueless as to what I was talking about. How in the world did issues from LAST year go away after a year? If anything those issues should be worse. What's even worse is when I took it to another mechanic, they stated that the replacements and issues Mike Morgan stated I needed, were not there. Not to mention, the attitudes these people have and the customer service skills are terrible.

Rating breakdown (out of 5):
1 person out of 1 found this review helpful.
Show full review
5.0

Gwendolyn, should be salesperson of the year , she has gone above and beyond to find me a car and I wanted to let her know that I truly appreciate it. Thank you

December 23, 2017
By harleylakatia on DealerRater

Every since the Hyundai Sonata 2006, I whole heartedly recommend Hyundai for a car! I am totally Hyundai bias.&#128513; Hoping the Sonata 2018 sport is even better.

Rating breakdown (out of 5):
0 people out of 0 found this review helpful.
Show full review
See all 236 reviews