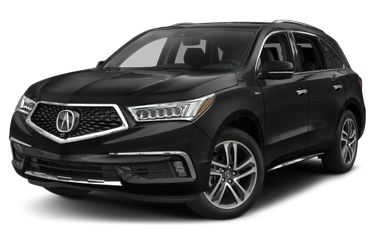 Glad I found it

February 6, 2021
By PJDink from Colorado Springs, CO
Owns this car

Wanted to make the change from myAudi A6 Quattro to an SUV, My wife has the Lexus 450h. After driving several models (mostly new) of SUVs, my research lead me to Acura and the 2017 MDX Sport Hybrid. I found only 5 in the entire nation and flew from CO to CA (Oakland Acura) to buy it. First off is Acura’s great CPO program. Next is the refined styling and features (I have the Advanced package). The hybrid engine is smooth and I get from 24-27 mpg in combined driving. The acceleration and shifting is very smooth (I think my wife likes my Acura better than her 450h as she is very complimentary of the vehicle when she get in). The adaptive cruise is OK but I find it a little awkward and I am OK not using for the few times I am on the open road. I find the engine shut off at stops to very responsive when I accelerate and I don’t even realize it is present (maybe that’s the benefit of the hybrid vs the non-hybrid model). The Sh-AWD works very well in the CO snow and I have no problems getting anywhere. Originally looked at other brands (Audi, BMW, Lexus) but glad I found Acura and the Sport Hybrid MDX. Would gladly buy again. One item of note is the Hybrid is NOT for towing! If you want to pull anything, might need something else.

September 29, 2020
By Gary from Denver, Colorado
Owns this car

As a two time Lexus Hybrid owner, I was searching for a newer used Lexus RX450h hybrid. I came across this vehicle in my search, unaware that Acura even made an MDX in a hybrid variant. I decided to go test drive a new one locally at my Acura dealer. I was simply stunned at how Honda engineers had put this SUV package together from the NSX super car. It was amazing. I love the seemingly endless smooth power from the 3.0 V6 engine and dual clutch transmission. Having owned Lexus hybrid SUV’s they seem downright anemic compared to this car. It is definitely sporty and fun to drive this 4,500 pound SUV around town or up in the mountains. It handles much better than the Lexus on dirt and gravel roads with the super handling all wheel drive (independent electric motors at each rear wheel allow one wheel to have power while potentially braking the other in turns). I can’t wait to try it out in the snow. The best part of all of this is how the car seamlessly transitions from the gas engine to the three electric motors without even a shudder. The only indication you get is the tachometer drops to zero and the quiet ride. I handily beat the EPA estimates of 26/27 mpg and usually get 32 mpg in mixed highway and city driving, and have even attained 34 mpg on a tank. Expect about 30 mpg on a constant cruise at 75 mph. I have surpassed 500 miles on several tanks with over three gallons of gas remaining, so 600 miles is possible - take that Tesla! Your bladder will give out long before the car needs gas! All of this power and luxury with top notch safety features. I love the lane keep assist and lane departure warning paired with the radar cruise control. It’s like semi autonomous driving. I drove from St Louis to Denver by myself in about 12 1/2 hours and felt like I had an auto pilot guiding me the whole way. Simply amazing. I also like the surround view cameras and the Milano leather seats which are so comfortable. The ELS sound system is amazing, and once you get used to the two screens for NAV and the radio/climate control, you won’t even blink. Apple Play came out in 2018, and is the only thing I would like, but that a pretty minor thing compared to the great value this car offers in a used vehicle. I picked my up as a CPO car from an Acura dealer, with just 16,000 miles on it, and it feels like a new car to me. Finally, the cavernous three row seating and cargo area holds 91 cu ft of stuff. It beat the Lexus by about 15 cu ft, and is only 4 cu ft smaller than a Tahoe. That is what really sealed the deal for me. I needed extra space to be able to clean and service our VRBO rental, and this vehicle performs in every way. Do yourself a favor and test drive this car. I think you’ll be glad you did. I felt like we would never go off of Toyota/Lexus again after having owned three Lexus and three Toyota’s, but I have to say, the Honda engineers really outdid themselves with this one.

The best Acura we ever owned

perfect blend of space and athleticism. Gas mileage is as stated and passing from 60 to 75 mph is no problem. Test drove X5, GLE,Q7 and I had to spend $20k more to get the other.

The Acura MDX Hybrid is a wonderful family car. Commuting back and forth to NYC I average 28 mpg. On the highway I am averaging 29-31 mpg. The seating is very comfortable and the first two rows of seats are heated as well as the steering wheel. Only the front seats are air cooled for the warmer weather. I average between 500 and 550 miles between fill-ups. I am very happy with my MDX Hybrid and look forward to my next one in a couple of years.

July 19, 2018
By Acurafan from Colorado Springs, CO
Owns this car

This MDX has it all with a spacious interior for all 7 passengers. Leather seats, navigation, sport hybrid, heated seats and mirrors very luxurious ride.

Our family has 4 MDXs. The Hybrid is Fun to drive - but different than previous gas-only MDXs. The car looks just like our other MDX, but feels different as you drive it. Actually getting about 28MPG. Safety features are the best!

Have the MDX sport hybrid with the Advance package. So fun to drive. Has great acceleration and handling. The dynamic modes available makes it that much more fun to use. Is the technology dated? A bit but it isn't a deal breaker. I think of it like using Android, use the menu subsection and it all comes together. Personally, I like having 2 screens. I just keep the maps on the top screen. Is it a true 3 row SUV? No, but you can squeeze folks in for a short ride from airport. I keep the 3rd row down and have so much cargo space. The biggest draw of this SUV is the hybrid moniker. It has moxie. The hybrid is a stealth performer and again, so much fun to drive.

Very nice with some nasty flaws

The car I?ve always wanted that turned out not so good. Smooth quiet well behaved drive. Long trip in an older MDX connived me this would be the most comfortable car ever. Not so much. Extra firm tight seats are made for a great ride through the mountains however if you plan hours behind the wheel this might not be for you. The range of seat adjustment doesn?t work well for 6 ft seasoned driver. Another major disappointment is in th infotainment package. Two displays are unneeded and confusing especially if you consider the instrument panel as a third. The user interface is really a mess of extra steps to achieve adjustments. The technology is amazingly slow for being dubbed ?Advanced Technolgy? The Honda Pilot and Odyssey are way ahead with a single display and Apple Car Play. Honda link and other technology becomes another confusing mess of logging and passwords. Been in the game too long to have premium auto with this level of issues. A very unsettling mess for a car with this legendary brand.

September 6, 2017
By Howard from Peoria, IL
Owns this car

We've owned our MDX Hybrid Sport for about a month and are totally in love with it! Great comfort and performance AND very good gas mileage for a vehicle of this size. It has very good pick up, is quiet at all speeds, looks good & handles well. We're still adapting to all of the controls and functions, but all seems manageable for a couple of 70+ year olds. All in all, we are happy owners.