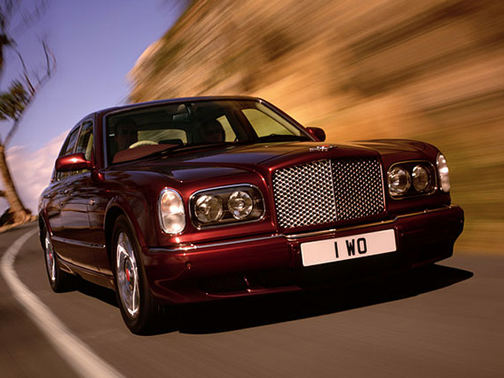 Our 2003 Bentley Arnage trim comparison will help you decide.

If Tanks Were Speedy and Sumptuous
2003 Bentley Arnage R

I left an economy car at home in pursuit of the wheels of fortune.

The abandoned automobile was the 2003 Hyundai Accent GL — a decent runabout, a good travel appliance that costs $12,224, including a $525 destination charge. It has a 1.6-liter, 104-horsepower four-cylinder engine. It gets 33 miles per gallon on the highway.

But what the Accent saves at the pump it could lose in a 5-mph crash. Its bumpers are flimsy — they can’t take a modest hit without toting up a substantial repair bill.

Also, weighing 2,290 pounds and lacking side and head air bags, the Accent could lead you to an extended hospital stay or a premature grave if you were caught in a 30-mph crash with a larger vehicle. Otherwise, it could serve you well and prudently until you bought something better.

I wanted to explore an extreme alternative, to see how the other side lived. So I saddled up with the 2003 Bentley Arnage R sedan, which I drove to this resort town in North Carolina’s Blue Ridge Mountains.

People who buy Bentley motorcars have an average net worth of $15 million and enough liquidity to pay the Arnage’s asking price of $218,804, including an average of $16,819 in options and a $1,995 shipping charge. They believe they’re getting a bargain.

I say this not in an attempt to provoke anger or envy. It is a simple fact of life. People who buy Bentley motorcars are rich, and they’re inclined to spend that kind of money, often more, on very fine automobiles.

Essentially, they get what Hyundai Accent buyers get — four wheels, four tires, one steering wheel, one engine, and a car capable of moving backward and forward and turning corners. But that’s like saying you get nourishment at both a fast-food joint and a four-star restaurant.

The difference is in the quality of what is being offered and the level of buyer expectations.

People who buy Bentleys prefer four-star restaurants and hotels. They are comfortable living in gated communities and staying at places such as the Chetola Resort here and the Bermuda Run Country Club in Winston-Salem, about two hours away. They mostly are friendly people — doctors, lawyers and entrepreneurs. Some are celebrities. Many give to charities. They like nice things.

Most certainly, the Bentley Arnage R is a nice thing.

The interior is covered with supple leather — door panels and dashboard, seats and ceiling. The cabin is accented with fine woods and rich-to-touch brass handles and chrome switches. Small dining tables embedded into the backs of the front seats also serve as laptop or writing surfaces. The rear seats adjust electronically to give maximum support to heads, backs and legs.

On the road, the Arnage R feels like a hot-rod Abrams tank — forceful, swift and highly maneuverable. It moves smoothly, quietly.

Unless you hit an 18-wheeler, or something larger, and hit it at 30 mph or more, chances are that you will survive a crash in an Arnage R — assuming that you are not silly and driving without wearing your seat belt. The steel-bodied car is loaded with passive safety — “crash protection” — equipment. There are front and side air bags, head bags and seat belts that automatically set their own tension.

The Arnage R also has abundant active safety devices — things that help you avoid crashing in the first place. Those include traction an stability control, anti-lock brakes, and a more rigid body with a better suspension system to improve vehicle control and handling.

In short, it is the way of the world.

The rich get Bentley. The poor, for the moment, can still afford to get Hyundai. For some, life is a quest for indulgence. For others, it is a struggle for survival.

Indulgence, in this case, seems much more attractive.

Complaints: The Arnage R’s interior is as luxurious as a palace, but it also shares some of a palace’s dysfunction. Ergonomics, for example, suffer in favor of tradition on the instrument panel, where gauges are laid out in an elongated, flat-faced manner, making many of them hard to read.

Praise: Luxury done well at what has become a bargain price in the super-luxurious automotive segment, which includes the Maybach cars from Mercedes-Benz, costing as much as $400,000.

Head-turning quotient: The Arnage R embraces old-money styling. Its exterior is stiff, formal, aloof. As such, it evokes praise and damnation. Detractors call it crass and greedy and arrogant. Owners and other supporters call it beautiful.

Mileage: I averaged 13 miles per gallon in mostly highway driving with two passengers and a trunk full of luggage.

Purse-strings note: There is intense competition in Bentley’s rarified segment of the automotive market. Audi, BMW, Cadillac, Jaguar and Mercedes-Benz are all introducing or planning to introduce super-expensive cars in this category. You can bargain.

Most "Looked" at vehicle

February 17, 2020
By Courtship1 from Marco Island. Fla
Owns this car

Bentley has always been the marque of luxury . No exception with the 2003 Arnage. No matter what model one chooses. Always a class in itself.

Rating breakdown (out of 5):
1 person out of 2 found this review helpful. Did you?
Show full review
See all 1 consumer reviews 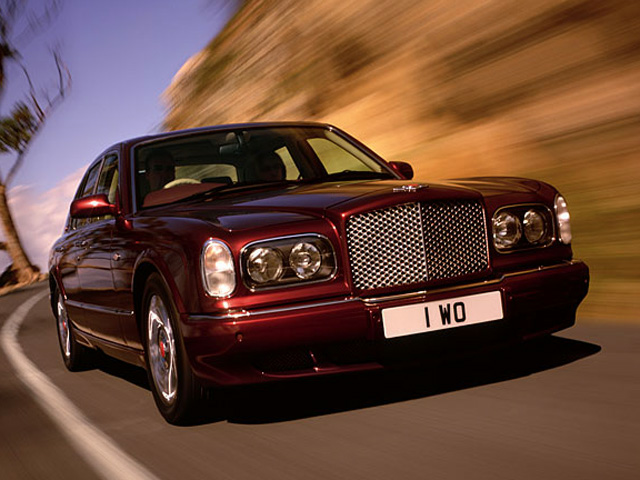