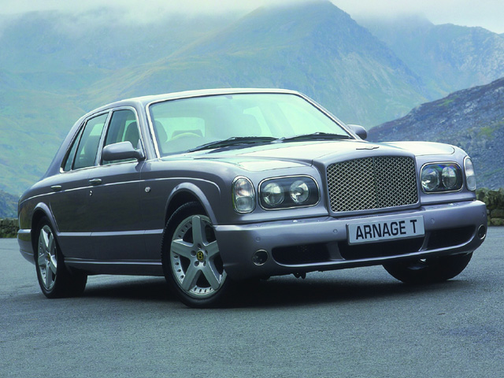 Our 2004 Bentley Arnage trim comparison will help you decide.

Vehicle Overview
Even the great motorcars dont last forever. Like most vehicles, the posh Bentleys from Britain are subject to alterations in corporate structure. A different breed of Bentley will soon enter the international scene, which will be led by the new Continental GT Coupe. On Jan. 1, 2003, Volkswagen took full control of Bentley Motor Cars. At the same time, BMW took the helm of Rolls-Royce, which had been partnered with Bentley since the 1920s.

A fully re-engineered Series Two range of the Arnage sedan was launched for 2003 and continues into the 2004 model year. Continental coupes and Azure convertibles were taken out of the lineup in 2002, leaving only the four-door models.

The lineup includes an Arnage T, which has been called the most powerful road-going Bentley ever built. The Arnage RL rides a wheelbase thats stretched an additional 9.8 inches to give even more space to backseat occupants.

Under Volkswagens stewardship, a new and smaller Bentley is expected to emerge and be priced significantly lower than current and previous models. Many existing styling features, such as large round headlights and a mesh grille, are likely to remain on the new model.

Exterior
The basic Bentley sedan is largely hand built and was similar to the now-departed Rolls-Royce Silver Seraph. Buyers can either choose from factory body colors or specify a custom hue.

The Arnage T sedans get a sport-tuned suspension, two-piece 19-inch alloy wheels with Pirelli P-Zero tires and dechromed exterior trim with front fog lights. A separate engine-start button is mounted on the center console. The grand-touring Arnage R has a comfort-tuned suspension and 18-inch wheels.

The outside mirrors can be folded in electronically, when required, and feature electrochromatic glass to reduce night glare. A satellite-based navigation system with a 3-D horizon view is standard. A 26.4-gallon fuel tank is installed for good reason, as fuel economy is not a reason to buy a Bentley.

Interior
Bentley buyers may choose walnut, oak, birds-eye maple or black lacquer interior trim to complement what the company calls grade-A hide upholstery, which is available in a palette of colors. Tucked amid all of this traditional luxury are several technological treats. A satellite-linked navigation system includes a screen that pops up from the dashboard when in use but is concealed when its off. The drivers seat automatically moves rearward to ease entry and exit, and both sides of the rear seat also shift positions.

Under the Hood
In regular form, Bentleys twin-turbocharged 6.75-liter V-8 engine develops 400 horsepower and 615 pounds-feet of torque. Output escalates to 450 hp and 645 pounds-feet of torque in the Arnage T. Both engines work with a four-speed-automatic transmission. Bentley claims that the Arnage will accelerate from zero to 60 mph in 5.5 seconds, versus 5.8 seconds for the Arnage R.

Safety
Antilock brakes, traction control, and side-impact and side curtain-type airbags are standard. 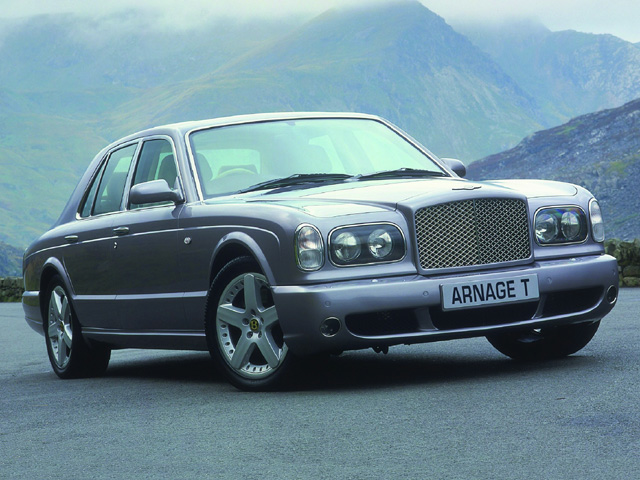