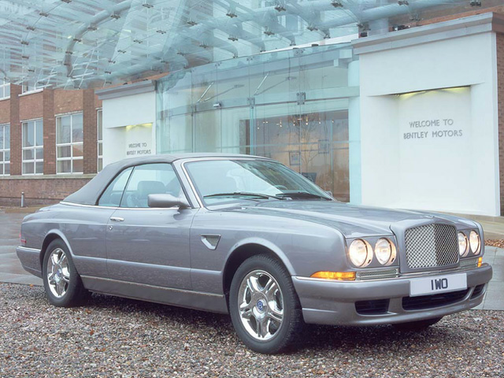 Our 2003 Bentley Azure trim comparison will help you decide.

Vehicle Overview
Awaiting a major change in corporate structure during the 2003 model year, Bentley has dropped the standard Continental R coupe and its Azure convertible companion. Final Series special editions of the two-door Continental R Mulliner and Azure Mulliner have been introduced instead, and they will serve as the last examples of the companys original presence. The Sport Touring package highlights Bentleys performance heritage, while the Luxury Touring edition spotlights the companys craftsmanship heritage. The Azure Mulliner sells for $369,990.

On Jan. 1, 2003, Volkswagen will take control of Bentley Motor Cars. At the same time, BMW will take the helm of Rolls-Royce. For many decades, Bentley has been the companion brand to Rolls-Royce. Bentleys cars sell for slightly lower prices than those by Rolls-Royce. Both marques have ranked among the most costly and coveted motorcars in the world. Until the Volkswagen/BMW takeovers, the current organization continues to produce, sell and service both ultra-luxury makes.

Under Volkswagens stewardship, a new and smaller Bentley is expected to emerge and be priced significantly lower than todays models. Many existing styling features, such as large round headlights and a mesh grille, are likely to remain on the new model. It could reach the United States as early as 2003.

Like Rolls-Royce, Bentley has long been known for producing sumptuous sedans, in which the owner rides in back while a chauffeur does the driving. But the top-end British company also builds cars that are intended to be driven by those who are more sport-minded.

Exterior
Both the coupe and convertible are 210.8 inches long overall and share the same design as the Rolls-Royce Corniche convertible. Each is a few inches longer than the Cadillac DeVille and 5 inches shorter than the Lincoln Town Car.

The stately, stainless-steel Bentley grille sits up front on both models. Mulliner versions feature 18-inch wheels, wheel-arch flares, front air dams and a wire-mesh grille. Convertible versions have a power top that stows beneath a flush-fitting hard cover behind the seats. Each car weighs more than 5,400 pounds.

Interior
Two-door Bentley models seat four occupants in a truly posh environment. Body-hugging sport seats are upholstered in two-tone leather. Buyers can choose from several types of interior wood trim. The power front seats move forward automatically when the backrest is tilted, which allows easier entry and exit to and from the rear seats. The seats have four memory positions.

Under the Hood
A 420-horsepower, turbocharged 6.75-liter Bentley V-8 engine powers each two-door Mulliner, and it teams with a four-speed-automatic transmission.

January 14, 2021
By Cobrafang from Sacramento, California.
Used to own this car

Driving a Bentley Azure convertible certainly will get you stared at whenever you stop, drive or park, everyone wants to see who is driving it, it is like driving a legend. The luxurious interior suck as the wool carpeting that is so thick it is like a palace is beyond compare, the turbo V8 has immense power and torque, it sends the massive car hurling forwards, the brakes are not up to repeated stops and tend to pull doing emergency braking at over 100 mph. These cars like any other older exotic car will run you about $3,500 a year to keep it in top condition.

No other make commands such respect.

I have had exposure to several Rolls andBentleys from a 1960 type S to a 69 Corniche conv, to this Azure. I am amazed that a car this heavy is this fast/quick, but at 100 mph + astab on the brakes results in a hard pull to the right! Not exactly impressive!

Too expensive for this car

I would rather have a 6 liter engine in my old camry which is more comfy than this... Too much price, I paid 220 K for this car and this is a beast on the road...for those who love Performance I would recommend this one Else go for a BMW or Nissan

All model years for the Bentley Azure 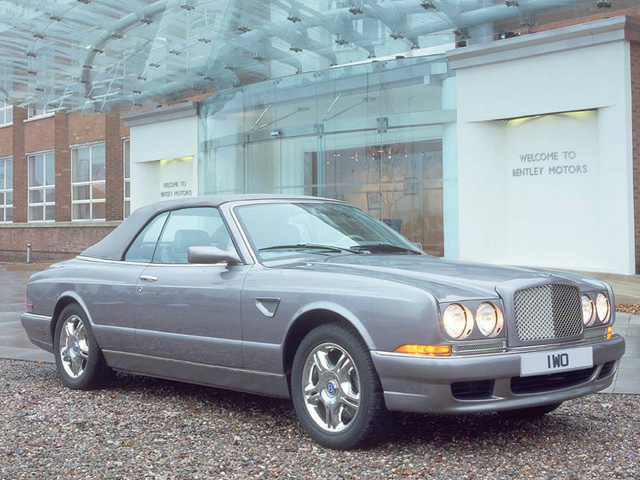