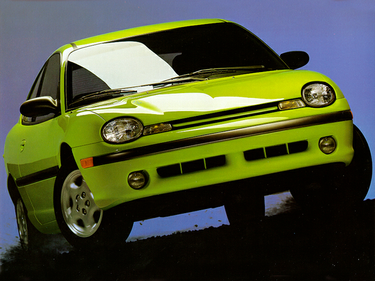 I've heard people say that a Neon is a horrible car. They say it's a cheap piece of junk that's horribly unreliable. That's exactly opposite the experience I've had with mine. I bought my base model Neon for a pittance with low miles, in good working order. Nothing was power other than the steering. It had, and still has, crank windows, manual locks, manually adjusted seats, good old manually controlled A/C and a manual transmission. It had the absolutely basic interior, which meant almost no amenities other than A/C, a radio, and adjustable seat belts. This is just fine by me, because seats are seats unless they're unbearably stiff. The upshot of this model is that with regular maintenance it is incredibly rare to have major problems like in the 'Dead in less than 100k' review. I maintain mine and I drive it like I stole it and I have never had a blown head gasket, a snapped timing belt, or any other major malfunction. It is, quite simply, BASIC but fun transportation. Keep your foot down and the worst mileage you'll get is about 20mpg, but normal driving with maybe a little bit of full-throttle, 30mpg is normal, give or take one or two. All highway driving, I've seen as high as 50 with a decent tail wind before I got back into city driving, but normal highway driving should net high 30s normally, 40 or a bit more if you go the full hypermiler route. The only real downside to the car is that until the last half of the first generation (95-99), the paint quality was pretty bad, so once the cars got a few years under their belts the paint would get scraped and knocked off fairly easily and the car would rust out fairly quickly. It's fairly uncommon to find a pre-97 or -98 Neon without at least one or two small rust spots. In my case rust will eventually make me scrap this one and swap all the major components over to a rust-free one. Basically a great cheap car with a lot of inter-changeability and good all-around performance (for what it is - an economy car). Find a 97 or newer with a manual, have a trusted mechanic look it over, and chances are you'll find it's a good deal even if it requires a little work.

Engine runs rough and sometimes dies. Mechanics have worked on it and can't fix it. And it has just under 100K!

Neons are known to blow headgaskets, however that is the only flaw I have seen in the Neons that I have owned. The Neon is a very reliable vehicle and is fun to drive.

Beats The Heck Out Of Honda's

Well we got the Neon is 96 with 50,000 on it and its been a great car. its a Highline 5-speed with the normal options... and its hardly ever seen the shop. its been about 12 years old now and it has 237,000 miles and still going strong and i still beat Civics when they pull next to me.

August 20, 2006
By Long Time Owner from Oklahoma
Owns this car

Wow, just read another review from somebody who "rented a Neon" several years ago. Although I've formed strong opinions about cars I've rented for a weekend or a week, such a short exposure doesn't qualify an individual to speak with credibility on the merits or failings of a vehicle (particularly value for the money and mechanical reliability). I bought my 95 Neon in 95: Highline 4DR Sedan, 5 Speed Manual Transmission, AC, power door locks. This car has been a relatively trouble-free, economical, and enjoyable vehicle for the past 11 years. It shows no signs of "wearing out" any time in the near future, so I'll probably have it a few years more. Styling: Anybody who buys a specific car usually does so because the model has some initial appeal. The Neon's quirky exterior appearance is high style to some, but just goofy to others (especially from the front). I find it appealing. The interior layout is spacious. I'm of average height, and I have tremendous headroom in this car. Rear passengers are usually surprised by the room in the rear seat. Reliability: Over 11 years, here's the ONLY problems I've had: 1) Speedometer failed @ 75K miles. Replaced the cluster myself for $125, but replacement speedo failed about 25K later (it's intermittent, a problem with the circuit board). 2) AC failed, hose needed replacement, $300. 3) Chrysler radio quit about 60K miles (replaced it myself for $35). 4) Plastic headlights crazed after 8 years, replaced with clear ones for about $60 each. 5) Here's the big one: Engine head gasket failed at 65K. $600 repair. This is a major problem with the early Neons. When shopping for a used Neon (95-98) look for oil leakage around the heads. Ask if head gasket was ever replaced with the new aluminum gasket. 6) Clutch burned out. Not really counting this one..... every clutch wears out sooner or later. Value: This car was cheap to buy and it has been cheap to maintain. Fuel economy? Last year I took a 1500 mile highway trip and averaged 37 MPG. It was winter, and the AC was off, and I have the manual transmission .....still outstanding for a 10 year old car. Overall: If you want a luxury vehicle, or a car with terrific acceleration and handling, this isn't for you. If you want a great car for the money that will hold 4 1/2 people, get you there in reasonable comfort, this may be the one.

Zippy handling but no sense of safety

I drove this car as a rental many years ago. I would never BUY one, but it was ok to zip around in for a few days. The thing that bugged me about it was the skimpy skeleton and slipshod interior. The doors felt as if they were made of cardboard glued together, with flattened tin cans for the exterior. Not sure how this rated in crash tests or reliability, but -- let's just say that riding in the back seat sure felt like having two pieces of paper between yourself and total oblivion. I am not an owner, so take what I say with a grain of salt, but I would approach this model with caution. You can surely do better.