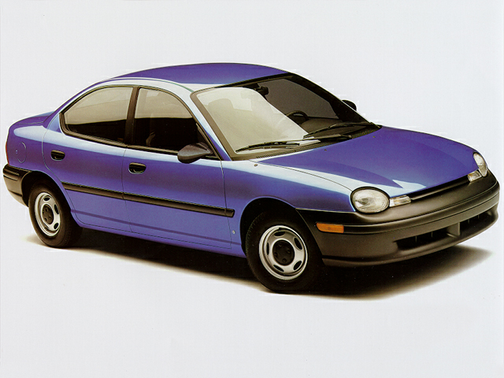 Our 1995 Dodge Neon trim comparison will help you decide.

Chrysler Corp.’s stunning success with its Plymouth/Dodge Neon sedan has led to the introduction of a 1995 Neon Sport Coupe.

While the coupe is based on Chrysler’s Neon four-door, sharing the same basic dimensions of wheelbase and overall length, the car is more than a clone of the sedan minus two rear doors.

The coupe has a decided sports flair to it, and is designed to appeal to the driver enthusiast.

To whet this enthusiasm, there is a new 2.0-liter (122-cubic inch) double overhead cam four-cylinder engine, with the twin-cam motor sporting four valves per cylinder. It is by far the best engine package, as the dual cammer puts out 18 more horsepower than Neon’s 2.0-liter single-overhead-cam engine.

“We haven’t ordered any Sport Coupes with single-overhead cams,” said Joe Etchison, general manager of Palmer Dodge West. “The coupe is an enthusiast’s type of car, and that calls for a performance-type engine.”

Enhancing the product mix by including two doors instead of four is a body that has a 10 percent increase in bending stiffness, and 2 percent more torsional rigidity. When mated to a five-speed manual transmission and performance suspension system, you have quite a potent vehicle.

The coupe by virtue of these design parameters lends itself to a get-up-and-go atmosphere.

“The four-door (with a single-overhead-cam engine) is oriented toward family use,” Etchison said. “Owners are more interested in economy than in performance, although it’ll step right out and go.”

The heart of the Sport Coupe is an engine which is Chrysler’s basic l22-cubic inch 4, but is equipped with an aluminum head and two camshafts. The standard sedan engine’s single cam also sports four valves per cylinder. But valve action is via rocker arms instead of direct-valve activation, and this accounts for the dual cams higher engine speed and higher horsepower.

At 2.0-liters, the twin-cam and single-cam engines are the smallest ever built by Chrysler, with the dual-cam version having the highest specific power output — 75 brake horsepower per liter – of any naturally aspirated (non-turbocharged) motor in the corporation’s history.

To take full advantage of this twin-cam motor, Chrysler is offering a performance five-speed manual gearbox that differs from Neon’s standard five-speed in three ways. Fifth gear and the final-drive gear ratios in the performance transmission are numerically higher (the higher the number the lower the ratio) than in the standard version. And there is a reverse “brake” for easier shifting.

This final drive ratio benefits all five speeds, providing quicker acceleration and sometimes negating the need to downshift to make a q uick pass in traffic.

To keep everything going in the right direction the steering ratio is 16-to-1 for quicker wheel response, and the power system incorporates a unique valve control. To increase feel to the wheel, additional driver effort is required before the power assist begins.

This coupe will turn better than 87 mph in the quarter mile and has an estimated top speed of about 120 mph.

Style-wise, the Sport Coupe has a “power-bulge” bubble on the hood bearing 16V DOHC graphics. There is a deck-lid spoiler at the rear, and tinted, fixed quarter windows that are mounted flush with the body.

Instrumentation is somewhat standard for a sports-type coupe, consisting of a speedometer, tachometer, an d temperatu re and fuel gauges. They’re laid out well, right in front of the driver. But with a manual five-speed and dual cams I’d still like to have an oil-pressure gauge.

Chrysler calls the Sport Coupe a five-passenger car. But I’d say four would be more appropriate, unless you’re carrying children in the back seat.

The Neon Sport Coupe is a niche automobile, as compared to the sedan. But it’s a car with personality, and one in which drivers can play showroom stock racer everyday at an affordable price.

I've heard people say that a Neon is a horrible car. They say it's a cheap piece of junk that's horribly unreliable. That's exactly opposite the experience I've had with mine. I bought my base model Neon for a pittance with low miles, in good working order. Nothing was power other than the steering. It had, and still has, crank windows, manual locks, manually adjusted seats, good old manually controlled A/C and a manual transmission. It had the absolutely basic interior, which meant almost no amenities other than A/C, a radio, and adjustable seat belts. This is just fine by me, because seats are seats unless they're unbearably stiff. The upshot of this model is that with regular maintenance it is incredibly rare to have major problems like in the 'Dead in less than 100k' review. I maintain mine and I drive it like I stole it and I have never had a blown head gasket, a snapped timing belt, or any other major malfunction. It is, quite simply, BASIC but fun transportation. Keep your foot down and the worst mileage you'll get is about 20mpg, but normal driving with maybe a little bit of full-throttle, 30mpg is normal, give or take one or two. All highway driving, I've seen as high as 50 with a decent tail wind before I got back into city driving, but normal highway driving should net high 30s normally, 40 or a bit more if you go the full hypermiler route. The only real downside to the car is that until the last half of the first generation (95-99), the paint quality was pretty bad, so once the cars got a few years under their belts the paint would get scraped and knocked off fairly easily and the car would rust out fairly quickly. It's fairly uncommon to find a pre-97 or -98 Neon without at least one or two small rust spots. In my case rust will eventually make me scrap this one and swap all the major components over to a rust-free one. Basically a great cheap car with a lot of inter-changeability and good all-around performance (for what it is - an economy car). Find a 97 or newer with a manual, have a trusted mechanic look it over, and chances are you'll find it's a good deal even if it requires a little work.

Engine runs rough and sometimes dies. Mechanics have worked on it and can't fix it. And it has just under 100K!

Neons are known to blow headgaskets, however that is the only flaw I have seen in the Neons that I have owned. The Neon is a very reliable vehicle and is fun to drive. 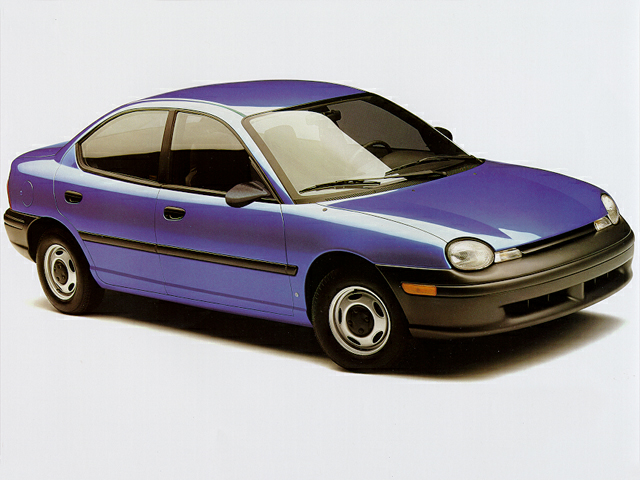